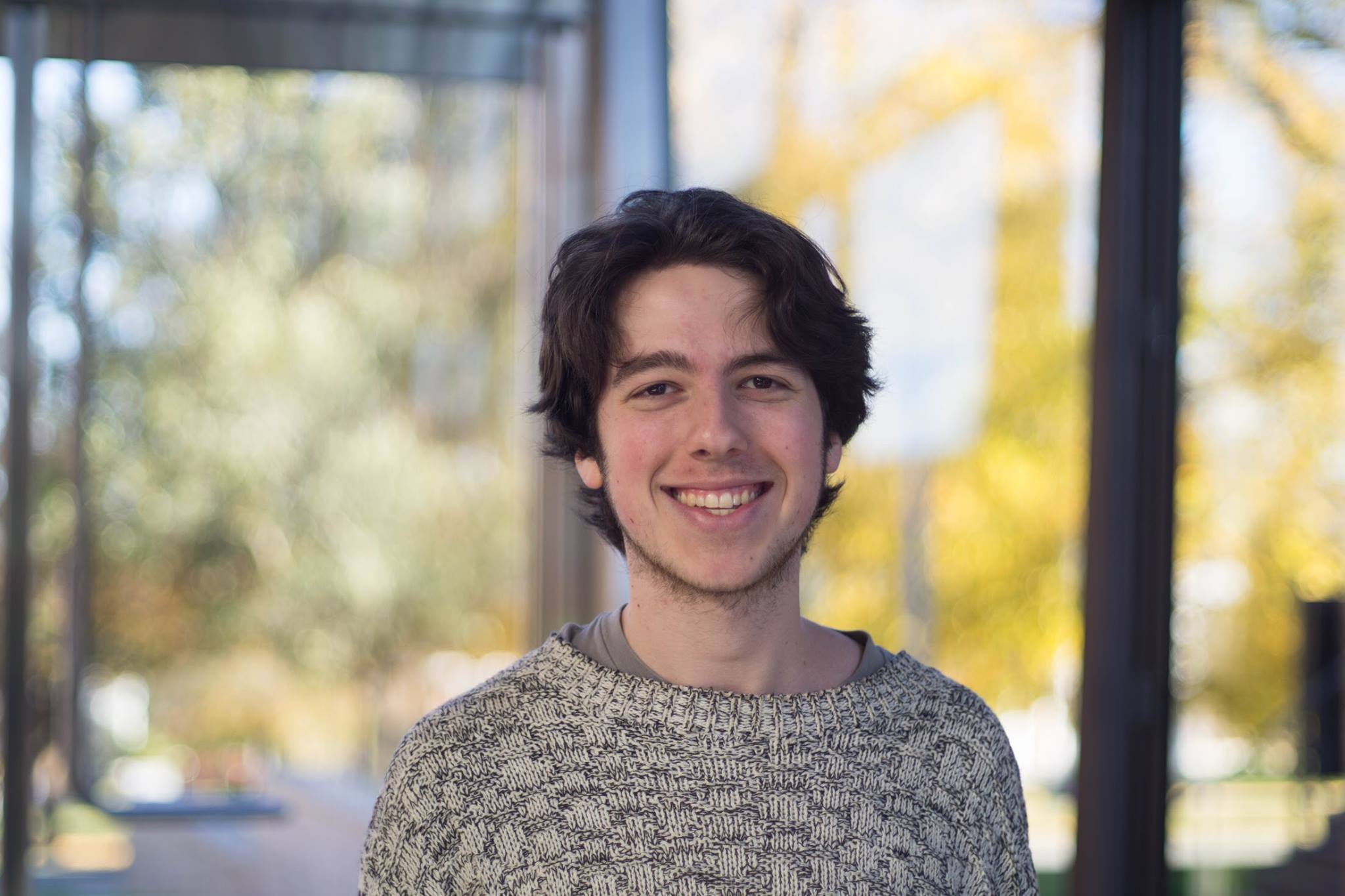 You may have seen his head bobbing up and down at a crowded Barbara Shop concert, or you’ve noticed his name printed as a byline of many-an-Aural Wes article. Or perhaps he helped you record your podcast out of Red Feather Studios. Regardless of where you know him from, Music and Psychology major Adam Manson ’19 is first and foremost a really nice guy. The Argus sat down with this week’s WesCeleb to reflect on his time at Wesleyan and his broader musical evolution.

The Argus: Do your two majors overlap at all or do you see them more as separate interests?

Adam Manson ’19: Well, I am interested in music cognition, and I’ve tried to take advantage of that at this school as much as I could. I was involved with a psych lab called the Mind Lab that [focused on] the effects of music on the brain. [But], I am doing my senior project for music. I am recording an album of songs that I wrote.

TA: Who is working with you on that?

AM: I’m trying to do it all by myself. I might get drums, but otherwise, I’ll play all of the instruments and record it all by myself…in Wesleyan’s own Red Feather Studios!

TA: Ah! So I’ve heard you are really involved in Red Feather Studios. Can you tell be about your role there?

AM: I’m one of the head engineers, but it really changes based on what’s going on each semester and who wants to record. I’ve been recording a lot this semester, and last semester I did a bunch of podcasts. Including WAP. Or as you may know it, THE Wesleyan Argus Podcast.

TA: I did not know that! So, what exactly does Red Feather do?

AM: It’s in the basement of the UOC [University Organizing Center], which is at 190 High St, right next to Movement House. Anyone can go to rfstudios.org and request a session for the upcoming week, and then they’ll be assigned an engineer, who records them. It’s all free and it’s all student run.

TA: So, I assume you got interested in recording because of your interest in music. What instruments do you play?

AM: I play guitar and bass mainly, but I play some drums. I took lessons last semester.

TA: How long have you played guitar and bass, respectively?

AM: I started playing guitar in fourth grade, and if I’m a senior in college now, that means I’d be in…16th grade, is it?

TA: That’s a crazy way to do the math.

TA: Well, my instinct is to think about your age, so you were nine….

TA: How did you start playing?

AM: So, originally, I wanted to play bass and I told my mom that, because I was most influenced by bassists—not that I knew anything when I was nine. My mom didn’t really know how to find bass lessons, but the teacher who taught orchestra at my school is mainly a guitarist, so he would teach mainly guitar lessons to kids. And he told her that he could teach bass also. So at my first lesson, the preface was that it would be like half bass, half guitar, but I just never did bass really. I hardly did bass at all until I was in like eighth grade. I guess they started off as classical lessons, but they were very beginner level, and it very quickly veered into just rock. I was also in jazz band in middle school through high school, so I did a little bit of jazz. Then I took jazz improv here and that was really fun, and I also took lessons here with a jazz teacher. So I would say I am more familiar with playing jazz now, but in middle and high school, I didn’t know anything about jazz, it was honestly super fake. But very fun?

TA: When was the first time you played with other people, like when music became a social thing for you?

AM: I had a band in fifth grade that probably practiced like three times. [Laughs.]

TA: What were you called?

AM: We went through a few names, the only one I remember, though, is “Ninety Nine.” It was kind of a joining of forces, where none of us had the same idea at all and we were only in fifth grade, and it never sounded good. But you know it was more about like the aesthetic of having a band, you know?

TA: I definitely get the aesthetic of a having a band in the fifth grade.

AM: Exactly. One day when we were in fifth grade, we were playing on my friend’s outdoor porch and then like a bunch of older kids, who were also in a band and were three years older, started watching us and cheering us on and applauding afterwords. And then they came up and jammed with us!

TA: Oh wow, I fully thought you were going to say they were making fun of you.

AM: Well, they probably were. [Laughs.] But I think it was more in jest! Or I hope…

TA: So after the Ninety Nine era, did you keep playing music outside of school with your friends?

AM: Yeah. Well, my best friend and I started an ongoing recording project when we were in eighth grade, that lasted until we were seniors in high school. The music scene [at my school] was kind of limited to open mic night, which happened like once every few months. I would perform with some iteration of people at open mic nights, but it was rarely a real band.

TA: So you’re from Hastings, which is really close to New York City. Did that proximity allow you to go to concerts and get involved in a broader music scene?

AM: I feel like in high school I wasn’t really involved with the broader music scene, other than Hastings, which was just like three kids in my grade who I played with and not much more than that. Since then, I’ve learned that Upper Westchester has more of a music scene…This summer I went to a basement show in Pleasantville! I was sitting there in this room, and was like “This is really odd, I didn’t even know this existed. This is like…what some high schoolers do.” We really just had open mics in our auditorium. I think there’s something about Hastings where it’s just a little too close to the city, so no one has that much interest in coming here. But there are venues [a little north] of us that get good acts.

TA: Did you know you wanted to study music when you came here?

AM: When I was going to college, my attitude was, “I don’t know what I want to major in, but it’s going to be anything but music!”

TA: Wow, so you were actively opposed to studying music. Why?

AM: I think part of it, honestly, was that my friend was studying music and I was like, “Well, I can’t compete with that, so I’m just going to completely not do it.” And I don’t know, the idea of it kind of stressed me out. Then I got here and was like, “Well, I guess the fact that that was even a question in my mind probably means that music is one of the only things I’m actually considering…”

TA: So how did you end up studying psychology?

AM: I guess psychology has always been another interest of mine. I feel like I’m naturally inclined to think about the way people think about things, and how our minds work.

TA: What else are you involved in on campus?

AM: I’m playing in Kevin Holliday’s band now. He’s also a music major, and I’m playing guitar and bass in that. It’s really, really good music and I’m excited about it. I also do Aural Wes, which is the music blog on campus. I edit content we put out, and I just posted the first podcast we put out which is hosted by Lulu Largent ’20. She’s doing a series about female musicians on campus, and she interviewed Jaime Lockard.

AM: It’s even hard for me to do that, even though I’ve been here for a while. I feel like the type of bands has changed a lot. Chef was sort of how I entered Wesleyan. There were a lot of soul hip-hop, funk, neo-soul acts. And that’s sort of more of a music-school-y mentality. I guess more recently it’s been a little less like that and more rock-oriented. It’s hard to even say that though because I feel like there are so few bands to even gauge this for. Like what’s my sample size? I’m thinking of probably three “rock” bands on campus, haha. It’s hard to tell if it’s apathy, or more of a lack of resources for freshman. But there was a concert last weekend, where all these new bands performed, which unfortunately I didn’t get to see. So that seemed like a really cool and exciting thing.

TA: Do you have any advice that you would give to younger students on campus?

AM: [In a robot voice] Try as many things as you can, you don’t always know what you like until you try it…But actually, I think just like reach out to people and don’t close yourself off. Because that’s sort of a theme in my Wesleyan experience.

TA: But you’ve seemed to transcend that?

AM: Yeah, I think I totally have transcended it, but I definitely started off very closed off. And I think that while it can be scary to reach out to people, there’s really no harm in it. If someone is like, “Yo, we should hang out sometime!” it’s rare that anyone is going to be like, “Wooooooooow, I can’t believe they just did that, what a loser!”

TA: So I’ve heard you’re in a band, Barbara Shop. How did that group come to be?

AM: So I met Neel Madala, the frontman of Barbara Shop because we lived in WestCo 3 together, when I was a sophomore and he was a freshman. And he was really eager to get involved in music early on. So we would play in my room together a lot. And then eventually he convinced me to fill in on bass for a band he was trying to start. It was me Ezra Kohn ’20, Neel, and Lucas Cerajido ’20, who I didn’t even know at all. But it sounded pretty good, and Neel had written a bunch of songs, so I was like, “Yeah, this is fun. Let’s do this.”

TA: How has it been to be in a Wesleyan band?

AM: I feel like it’s kind of put me more in the public eye than I expected. And it’s fun because…well, it’s fun to be around so many people all the time, and as someone who is a little more introverted, I think it was good for me. I mean look! Now I’m a celebrity. Beat that. Clearly, the world is my terrain.