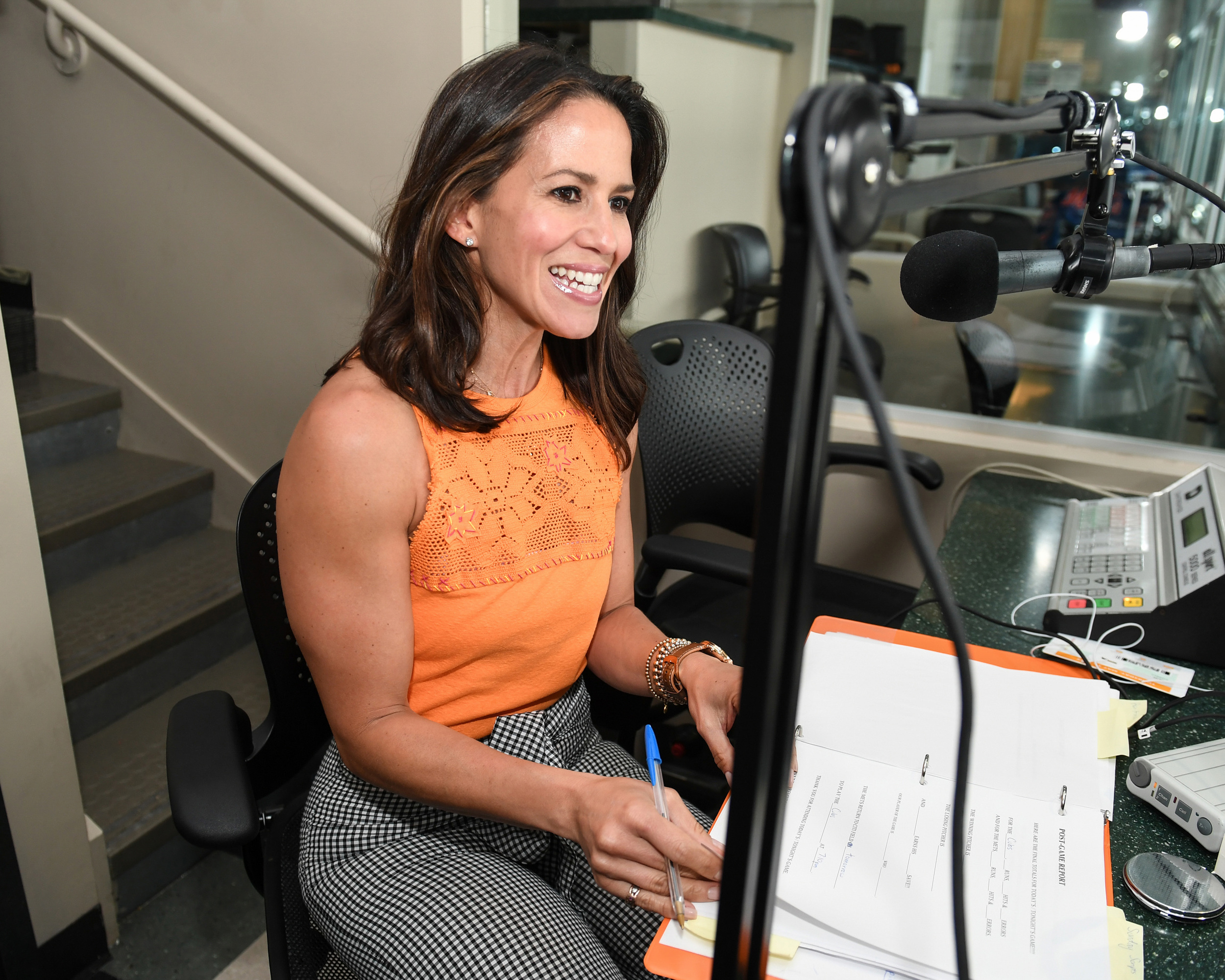 Marysol Castro ’96 took to Citi Field last year to start her position as a public announcer (PA) for the Mets. Castro is the first female PA for the team and the first Latina in the position in MLB history. The Argus reached out to Castro to discuss her relationship with broadcasting and sports and her journey to the ballpark.

The Argus: Can you tell me about your relationship with sports growing up? Were you always drawn to baseball?

Marysol Castro: I was always drawn to sports in general because I’ve just always been an active kid. I use the present tense because sometimes I still feel like a child, being the mother of two children. My first sport was gymnastics. My sister was a gymnast, and she was a coach, and because she coached I was able to train for free because we could not afford gymnastics. My dad and my brother all watched baseball, so I naturally gravitated toward baseball. My best friend in elementary school…lived behind the old Yankee Stadium. So we could go to his house, literally sit on his stoop, and hear the games. Sports were always just part of my life as a kid.

Sports were always just part of my life as a kid. Even in high school, I played volleyball, I ran track, and I dove. I actually went into Wesleyan hoping I would play volleyball. I did not play volleyball—I got cut from the team, but, whatever. When I was in high school, I dated a boy who went on to Dartmouth…. He came back for winter break with a dislocated shoulder. I was like, “What did you do to yourself?” He said, “Oh, I did this playing rugby.” I said, “What’s rugby?” and he said, “Oh, a sport you’ll never play.” Of course, if you know me, that’s all I needed to hear. I now needed to figure out what the heck this rugby was. And so when I got to Wesleyan, I discovered it and I loved it and I never looked back. I played all four years at Wesleyan and four years after on a New York team. And actually when I got to “Good Morning America,” one of my higher-ups was like, “You can’t play rugby anymore. We can’t have your face bashed in.” Thus, my rugby career came to a screeching halt.

A: How did your time at Wesleyan lead to your career in broadcasting?

MC: Right out of Wes, I taught high school English for four years at Poly Prep in Brooklyn…. Then, I went back to what I knew, which was writing. I started applying to writing programs. Very randomly and somewhat serendipitously the application for Columbia School of Journalism showed up at my door. I was living with Emma Jacobson, also class of ’96 at Wesleyan, and she was like, “This is it! This makes perfect sense! This is what you should do!” I was like, “Dude, I don’t even watch television news, and by the way, this is hardest journalism school in the country to get into.” She told me to just do it, and there I was, a year later, walking into the J School.

Upon graduating, I went to News 12…and the news director was like, “I don’t see a standup in this,” and I said, “No, I told you I’m going to be a producer, and a writer, I’m going to make your anchors stars.” He said, “You don’t even have any makeup on.” He told me to go into the parking lot and shoot a standup. So I did, and the rest is history. I was on air. I was as excited being on air as I was behind the camera.

I started in hard news. For me, hard news lays the foundation for everything in the same way if you’re a dance ballet lays the foundation for any other dance…. And if you know hard news, and if you know how to write it, you know how to be objective, then everything else in life you see that way. It was News 12, then this crazy media jump to Good Morning America, then CBS, then I left the business altogether…. I started to write television shows because I saw a huge gaping hole in the marketplace, which was that there were not enough Latinos on air or making decisions about programming. So I created a show and that’s what got me into thinking, “I have to do this on my own.” That was back in 2012, and I’m still doing it.

Along the way, I stopped at ESPN. People ask me how I made the leap from news to sports. It goes back to what I was saying that when you have news at your foundation, you can look at anything objectively. And you have to put in the hard work. They asked me to do baseball and boxing, and I was like, “Jesus Christ, boxing, you might as well have me do curling—could you pick a more obscure sport?”… I studied it. I’ve always been a student of the game, especially being a woman. Make no mistake, you are judged ten thousand percent. I would go into pitch meetings or go on the road and knew that any moment one of my colleagues could ask me a question, and if I didn’t know the answer, they might not say it to my face, but they’d groan and be like, “This chick doesn’t know what she’s talking about. Why did we hire another woman?” So I’ve always studied super hard.

A: How did you get involved with the Mets? Did they reach out to you?

MC: They did! So I had just finished a show called “Somos,” which I had foot the bill for, and said, “Screw it, I’m just going to do this on my own.” The concept was just to profile Latinos of all walks of life. Three years prior, I shot a pilot. There was a producer on the pilot whom I did not remember, but apparently she remembered me, and I had made an impact on her. Because when the Mets organization knew that they were going to hire a female PA announcer, specifically a Latina, she knew the folks in the production office at the Mets, and she said, “I have the perfect woman for you.” Make no mistake, I have never liked the sound of my voice. It sounds like nails to chalkboard…. I get this number, and at this point I’m going to market with “Somos,” but I answer it and it was Joe DeVito from the New York Mets…. I just thought, “Do I need to know a lot about baseball?” I mean there’s a cliché about “inside baseball” for a reason. And he was like, “No, it helps if you do, but the organization is really dedicated to hiring a Latina because we want to reflect the eyeballs that come to the ballpark.” I was like, wow, that’s really cool. Because unfortunately when you’re a woman in this business, in television and in sports, you have to triple question everything. I wish I didn’t have to, but I do…. I remember just kind of saying, “Why now?” He kind of laughed and said that he’d understand why I’d ask that. He said they wanted to bring America’s favorite pastime to where it was…. So I went to the ballpark, and it was a cloudy day, and I was like, “Can I run the bases?” and they were like, “Can you just read the words?” And I was like, “Fine,” and I got a call later that afternoon. It was completely unexpected. I had never thought I would be a PA announcer, period. Never mind a PA announcer for the Mets.

A: How do you prepare for each game?

MC: I read everything. Especially if it’s in my industry or if it’s something I’m preparing for, I will find as much research as I possibly can…. When I get to the ballpark, I try to get there early so I can settle in, go over names, go over lineups, rub elbows with Keith Hernandez and Ron Darling and say, “Oh, I had a crush on you during the ’86 World Series.” I’ll talk to the visiting player PR people or the radio guys to see if there are any pronunciations I don’t know.

A: How do you navigate your path in a male-dominated career? What are your biggest challenges?

MC: I don’t think about it. In the same way that I’m trying to raise my children to be genderless, I say we’re all equal. I just kind of say, you know, this is my job, and I’m so fortunate to have this job, so I just come in and do the best that I can. That being said, I also work with a very dynamic team that wants to help me. They want to seem me succeed and protect me…. I prepare for it the same way I prepared for anything else. Whether I was preparing for a meet in gymnastics, a race in track, or a game in rugby.

A: How do you hope to make your mark in your time as a PA?

MC: I guess in many respects I never think about what mark I want to make because I’m always consumed in being in the moment. The journey is while you’re doing it. I think about my two boys, my niece right now, and all of the kids I grew up with on the block. I hope that more people of color and younger folks of color are afforded more opportunities. Renel [Brooks-Moon] paved the way for me and so many others like me. I hope that I can do the same for others. It’s easy to say, “Follow your dreams!” Fuck that. Do you know how many people follow their dreams and never become successful? I’m in the business of trying to change the mindset of the gatekeepers, of the people who make the hiring decisions, so that they can see they have to evolve. That’s across all industries, I think. I hope whatever little mark I make, being the first female PA announcer for the Mets or whatever it may be, I hope it changes the mindset of other folks who are in positions of power. That they begin looking in communities that are underserved or overlooked.