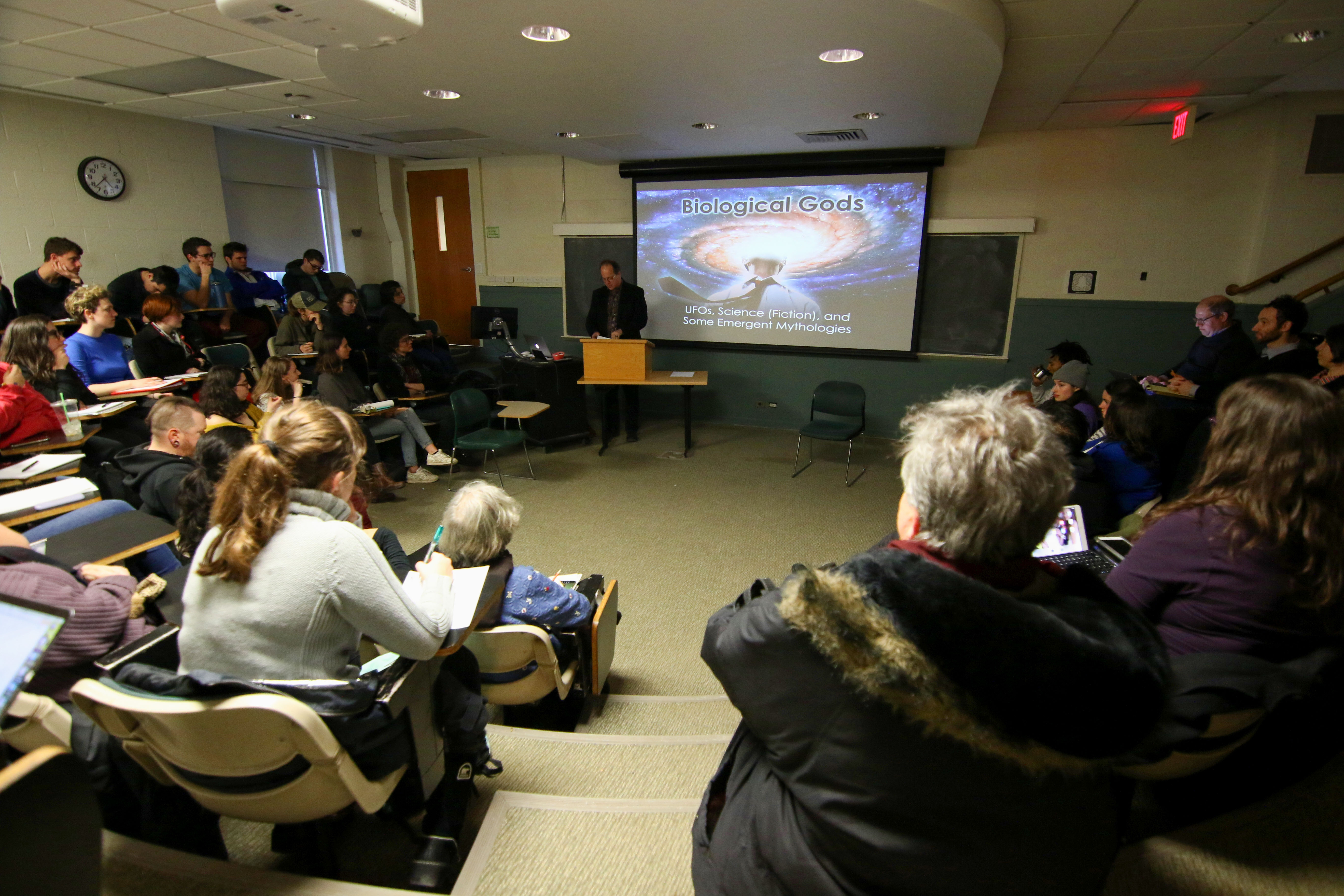 On Wednesday, Feb. 13, the Newton Rayzor Chair in Philosophy and Religious Thought at Rice University, Jeffrey J. Kripal, came to Wesleyan to deliver a lecture on Unidentified Flying Objects, or UFOs.

His lecture, entitled “Biological Gods: UFOs, Science (Fiction), and Some Emergent Mythologies,” traced the cultural history of UFOs, culminating in accounts of UFO interaction as captured in popular books written throughout the mid-20th century. To Kripal, UFOs, and the aliens which operate them, straddle the line between objective and subjective truth. They are not containable within the frameworks of objective reality and subjective reality; rather they exist within a whole other realm: a third realm.

Kripal began his lecture with a clarification on what he means by the term “UFO phenomena,” which is an expression he used throughout the lecture. Kripal took care to note that the term UFO is only a modern military acronym for the strange objects that have appeared throughout history, and are both an ancient and modern phenomenon.

“By the ‘UFO phenomena,’ I mean the entire process, from remembered or claimed contact, to mythical formation, paranormal power, military concern, and serious scientific interest, even if this scientific is of a secret, classified, or simply private nature, which of course it usually is,” he explained.

Kripal then moved into accounts of UFOs as captured historically. He noted that UFOs are depicted in Jewish history, as written in the Torah, regarding the arrival of a humanoid figure appearing to Ezekiel and seeming to abduct him. UFOs also appear in Renaissance paintings, which capture them as strange, disk-shaped objects in skies. Kripal then went on to describe more recent UFO encounters, including one in which a fighter pilot named David Fravor chased a spinning disk in 2004. 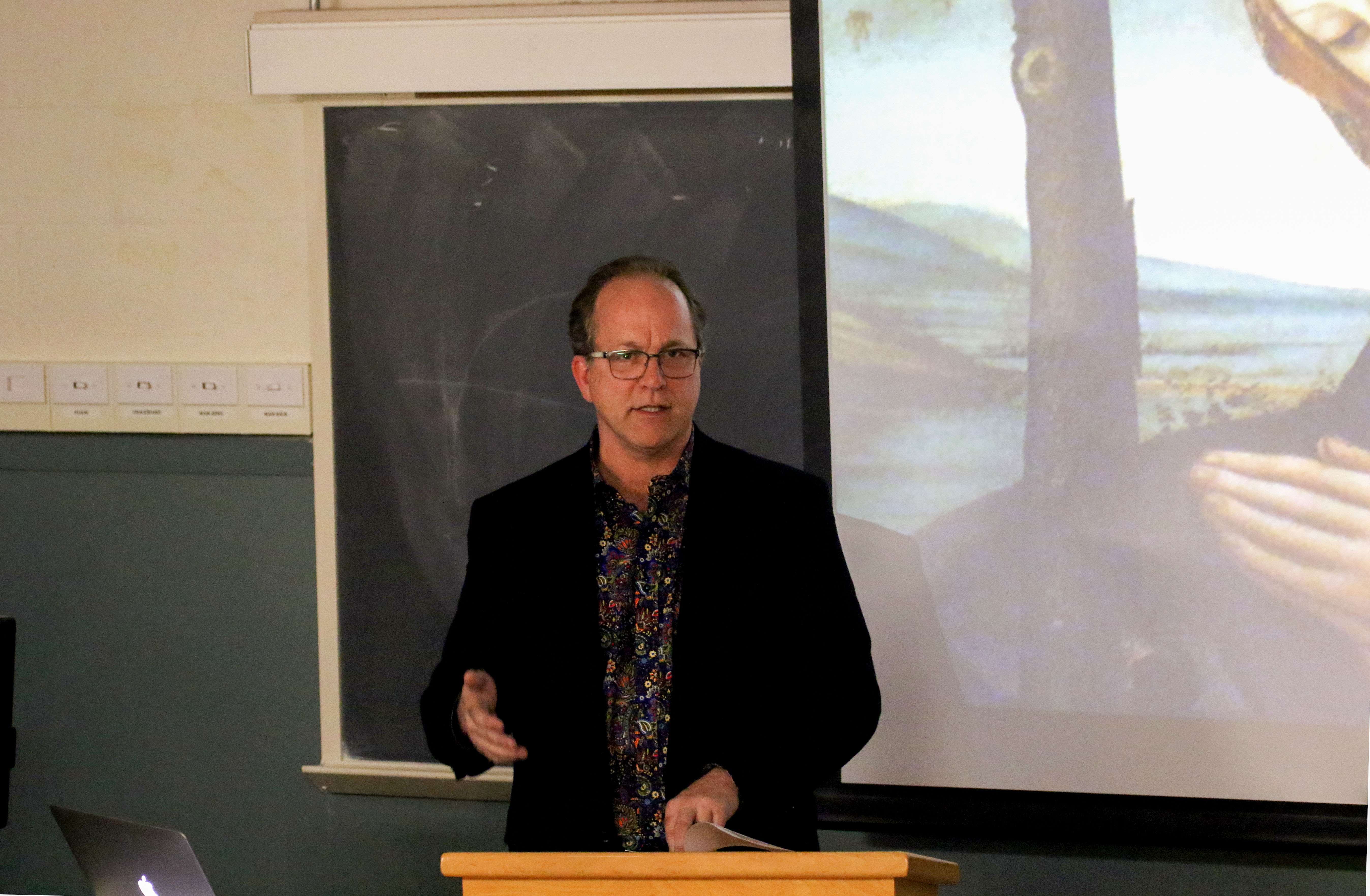 “The pilot was honest enough,” he said. “The thing he chased ‘weirded him out.’ I can vouch for that. After a decade now of studying these events with the tools of studying religion, I am weirded out, too. I am weirded out because it is patently obvious to me that we have absolutely no idea what to make of the UFO phenomena, which persistently and dramatically violates our hard habit of carving up the world into objective events and subjective experiences. To make matters worse, or better, these events go on almost every day around the world, and involved individuals from every walk of life and level of education.”

Kripal emphasized this violation of experiences as objective events and subjective experiences, noting that UFO encounters do not easily fit into either category. Yet these experiences remain universal.

“These are not especially rare events,” he said. “Nor are they restricted to any culture, race, religion, or time period. To use a most provocative word in the humanities, these things in the sky look like universal.”

Subsequently, Kripal noted, the study of these objects ought not to be relegated to a singular place and time, as they require a broad cross-cultural analysis. The nature of the phenomenon is, according to Kripal, neither limited nor abnormal.

“Our intellectual conclusions are mostly a function of our ontological exclusions,” Kripal emphasized.

Kripal then focused in on one particular writer, John E. Mack, who is a Pulitzer Prize winning author, and also a frequent writer on aliens, UFOs, and abductions. Kripal noted that Mack’s philosophy on alien encounters is what he deems to most closely match his own: that UFO encounters operate within a liminal zone between objective and subjective reality.

“Mack’s position was that the ‘abduction phenomena’ is quite real—though real here does not follow the usual ontological tracks of the sciences or the humanities,” Kirpal said. “We’re not talking about simple, stable objects in three-dimensional space, nor are we talking about illusory experiences of subjects. We are talking about something very real, and very important, that appears to be in-between.”

After continuing his investigation into different experiences of UFO sightings across history, notably in American popular culture in the mid-20th century, the remainder of the lecture focused on individuals who themselves experienced interactions with UFOs. These individuals all later went on to consider those interactions in intellectual, religious, or philosophical frameworks.

The first person he considered was Phillip K. Dick, who in 1981 published a science fiction novel called “VALIS,” which stands for “Vast Active Living Intelligence System.” The novel described a super-evolved form of life, which had cross-bonded with Dick to produce a mutant. The ultimate goal, as described in this novel, is to achieve a point of without separation between human beings and divine consciousness.

Kirpal also described the experiences of Barbara Ehrenreich, who wrote about a strange encounter that she experienced in her youth in her 2014 book, “Living with a Wild God.” Ehrenreich, Kirpal stressed, had trouble considering her extraordinary experience of a burning town and an alien consciousness, within the realm of reality. Ehrenreich is an author and social justice advocate who is a part of the intellectual elite, Kirpal explained, which helps demonstrate how widespread, and un-picky, the UFO phenomena is.

After Kirpal finished his talk, he was met with questions from a variety of students and staff in the audience. Professor of Religion Mary-Jane Rubenstein posited a question to the speaker, touching on the plurality versus the singularity of aliens and gods in the lecture.

“I was thinking about the Ehrenreich description in which she says ‘I was flooded by a flock of mauling angels,’” Rubenstein said. “And she goes on to say, ‘They only make themselves known to them based on their schedules.’ But then toward the end of that quotation she goes on to say ‘a being’ and then the title [of her book] is ‘Living with a Wild God.’ So I was really drawn to this massive flocky plural, yet it seems even with her language to kind of collapse…it feels like a lot of this language does collapse into a kind of all-is-one hyper-monotheism.”

“It does kind of go back and forth,” Kirpal responded. “I think there’s more of a polytheism implicit in a lot of this material, rather than monotheism. But there are certainly writers who want to move from one to the other, there’s no question.”

Another audience member referenced Kirpal’s use of the religiously-connoted phrase “Biological Gods.”

“Coming from biology and…religion, maybe it’s just that I have a fairly certain idea of what ‘Gods’ usually means…what that entity or entities means. I’m curious as to why you’re choosing to call these biological gods, in this phenomenon, and referring to it that way,” the audience member asked.

“Because of my sources that routinely do,” Kirpal explained. “They don’t use that expression, but what they refer to are entities that live in the environment, and that are completely invisible, and that have nothing to do with carbon, or any kind of body, but are clearly sentient, and alive, and intelligent, and I’m very interested in them.”

“But wouldn’t that describe any potential alien life-form?” the audience member followed up. “I don’t understand the god connection.”

“Because historically, anybody who would have had one of those experiences would have identified it as a god, or an angel, or a demon before the modern world.”

“And, I should say, that these subjects also invoke religious language as the only adequate language to describe this,” Kirpal added.

Emmy Hughes can be reached at ebhughes@wesleyan.edu and on Twitter at @spacelover20.