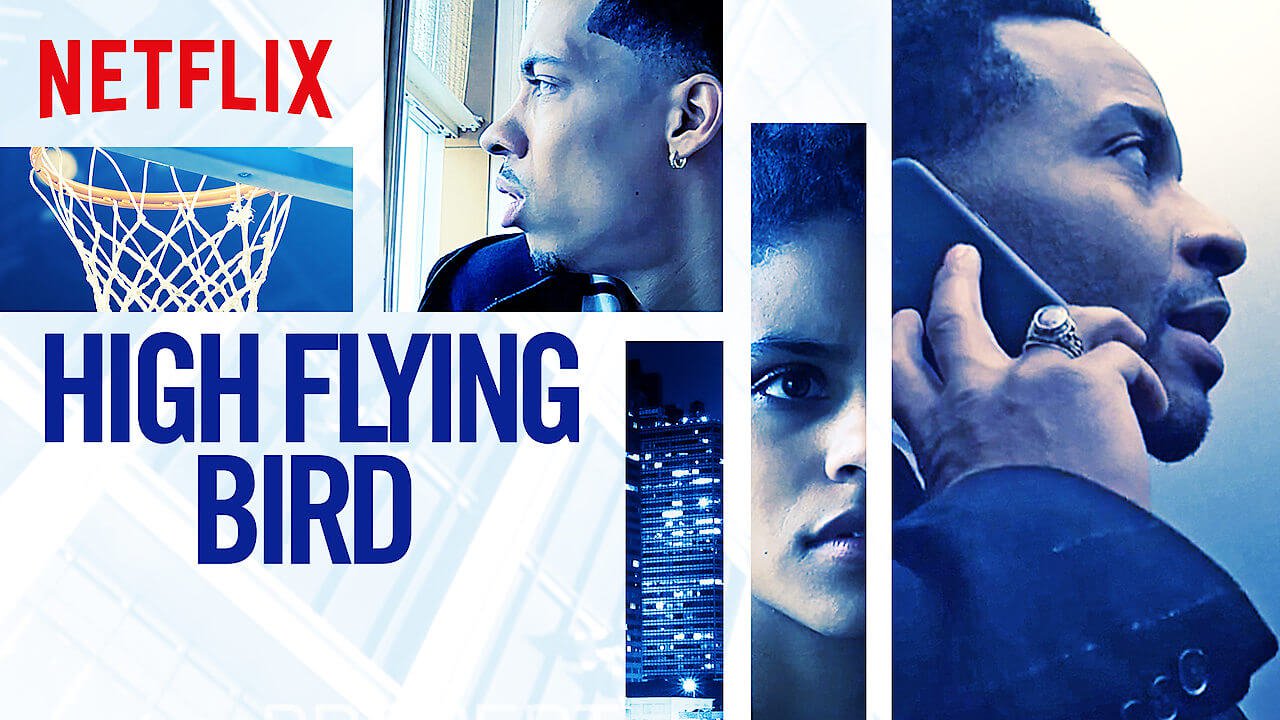 Will Jacobson ’20: “High Flying Bird,” released on Netflix last Friday, is the latest film by Steven Soderbergh, the prolific auteur who is known for his subversion of Hollywood norms as much as he is for his actual films. It follows Ray Burke (Andre Holland), a savvy basketball agent who sees two steps ahead of all of the owners, players, and fellow agents as he figures out how to end an NBA lockout. The script, written by Terrell Alvin McCraney of “Moonlight” fame, is razor-sharp, expertly unpacking the power dynamics and racial undertones of American sports. What would happen, the film asks, if players were freed from the control of the billionaire owners and decided to play against whomever they wanted, whenever they wanted? The characters in the film discuss these issues in free-flowing dialogue that would fit snugly into stage play. It is also shot entirely on an iPhone. This realist aesthetic makes for an unusual pairing with the theatrical screenplay However, the film works quite well.

Luke Goldstein ’20: I’m not a film major or anything cool like that, so I’ll just speak about watching the movie as a layperson. I like sports. I like films about sports. “Coach Carter,” “Remember the Titans,” “Bull Durham,” “Bench Warmers” These classic films use sports as a conduit for great drama, trials and tribulations, coming-of-age stories, and all the hallmarks of great works of art. But “High Flying Bird” is more than that. The sociological lens that the film puts on the sports industry and its underlying injustices captures the emerging political consciousness in modern sports fandom, which has become more attached to following individual players rather than teams, and has been ushered in by the social media age. The black-balling of Colin Kaepernick after his protest against police violence back in 2016 followed by Texans owner Bill McNair’s remarks on the problems of “inmates running the prison” lead to widespread public outrage against the NFL. In the basketball world, Clippers owner Donald Sterling was widely condemned after leaked audio surfaced of him making racist comments, which sparked discussions more broadly about the unequal distribution of power between white owners and black players. This backdrop has lead to a renaissance for the socially conscious athlete, embodied by Lebron James’s activism on and off the court. “High Flying Bird,” Ray’s entrepreneurial player-centric business model, challenging the league’s corporate hegemony, serves a plot device to address these underlying racial inequities in the sports industry. The innovative combination of a sports fantasy fiction premise interlaced with interviews with real NBA stars reinforces the film’s social commentary on the modern day basketball industry.

WJ: Soderbergh’s decision to shoot on an iPhone reflects his belief that he is disrupting the status quo of Hollywood as much as Ray Burke is revolutionizing sports. As subversive as this film is on various levels, it is ultimately a rousing endorsement of Apple and Netflix, two of the biggest corporations on the planet. During the film, Ray essentially breaks the fourth wall by offering Netflix as a conduit for streaming these informal pickup games between NBA players. It is an exaggerated wink, as much as the moment when Ray looks on admirably at social media footage of the first pickup game, which has gone capital-v-Viral. There goes the iPhone again, cutting out the middleman and traveling straight to the hearts and minds of the American public. While the film is certainly critiquing certain power structures, it is simultaneously pretending as though its revolutionary vision of disruption has not already been co-opted by monopolies and thus become part of the very same establishment it is working against.

LG: I’m listening to Will work out his criticisms of Soderbergh as he writes this, and I don’t buy it for a second. Personally, I just didn’t think the meta-Netflix references detracted from the film’s message even if Soderberg and McCraney were pressured to put them in, which there’s no evidence of anyway. The film also mentions Hulu for crying out loud! If it was all about Netflix’s corporate image, then why also give a shout out to one of your biggest competitors? Plus, the Netflix and Hulu references don’t just come out of nowhere since they do actually fit the decentralized business plan that Ray is pioneering. Given Soderbergh’s unorthodox career trajectory that has been composed of daring experiments in new avenues of cinematic storytelling, it makes sense that he would try utilizing iPhone cinematography. While it might not work as well as it does in Sean Baker’s Tangerine, which in part inspired Soderbergh, it adds a grainy and authentic feel to a story that does largely take place in the offices of the corporate basketball world.

WJ: This film, despite any sort of devil’s-advocate nitpicking I may have done in the recent paragraphs, is incredibly ambitious, unique, and worth watching. Anyone can make a movie on their phone. Maybe they can even make it on their Android, and submit it for wide release on Vimeo. If that’s what happened here, this would have been flawless. I also would probably not have ever heard about it that way.

LG: Overall, the film is a creative and provocative summation of our culture’s dialogues with regards to the intersection of race, politics, and sports. If anything, the hour-and-a-half run time doesn’t give nearly enough space to fully delve into such powerful and pressing themes.