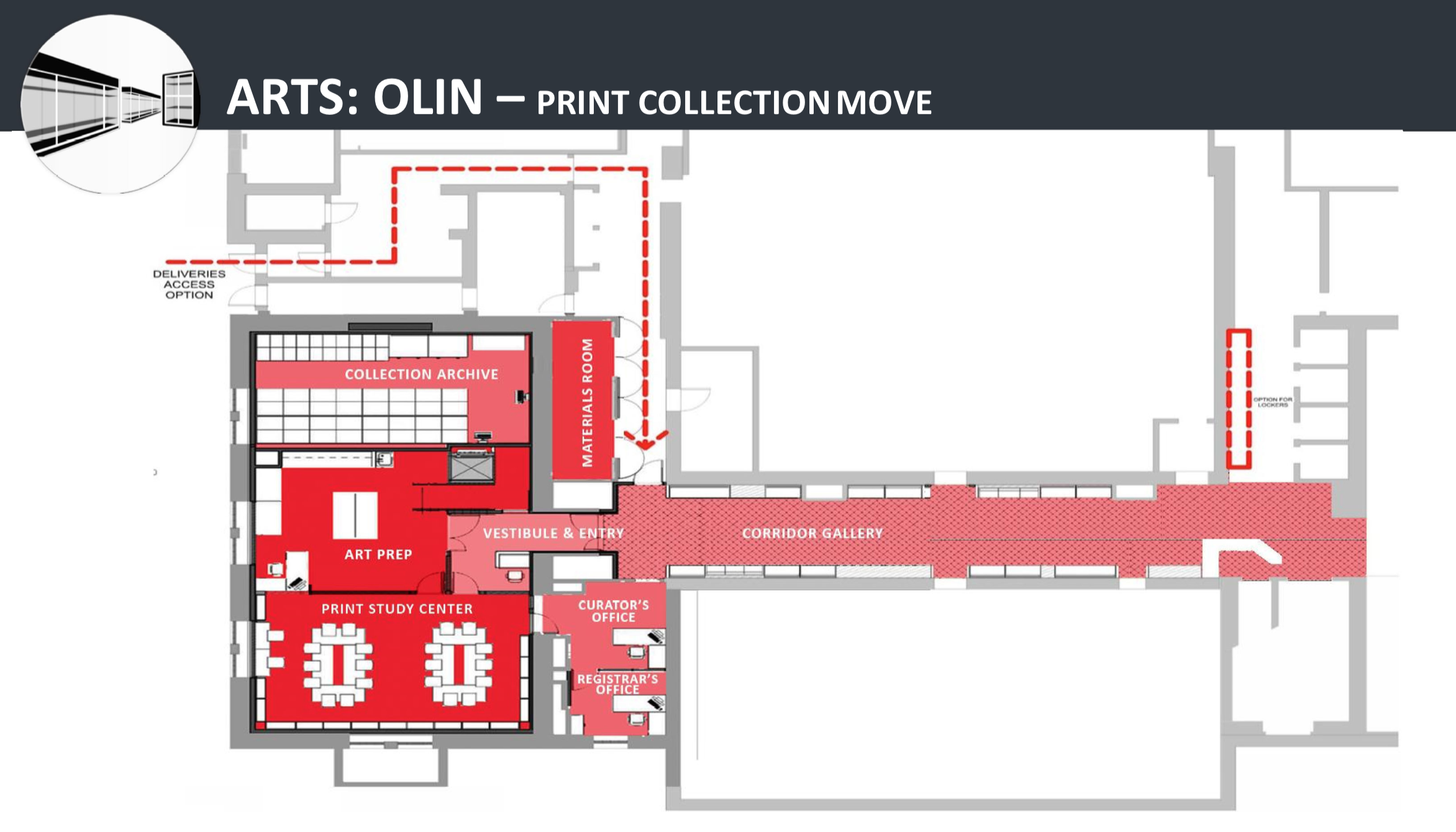 The University’s art collections, currently stored in the Davison Art Center (DAC), will be moved to Olin Library following construction of new gallery and exhibition spaces. The University’s extensive collections, which includes 25,000 pieces, is considered one of the best collections of any university in the country. In the hopes of better preserving and piquing greater interest in the collection, ongoing renovations to Olin will add a storage space for the collections, an art preparatory space, and a print study center.

According to Director of Physical Plant Alan Rubacha, who is the Project Manager for the move, rumblings about the potential transfer of the collections out of the DAC have been growing for two decades. Concerns about the environmental conditions of the collection’s storage space played into the decision to move the collections, but ultimately, the choice came down to centralization and accessibility, DAC Curator Miya Tokumitsu explained.

“Alsop House is a beautiful building, but…[there are] physical barriers, particularly with people who have mobility and accessibility, physical needs,” Tokumitsu said in an interview with The Argus. “I think just in terms of practicality, and the routes that people take regularly through campus, Alsop House, lovely as it is, doesn’t appear as a building that students would just walk into.”

The DAC is considerably far from the center of campus, and as a consequence, students rarely find themselves accidentally stumbling upon the University’s art collections, according to Tokumitsu. The move to Olin would place the collections in a busier area of campus, ensuring the University’s collections are visited by the maximum numbers of students, members of faculty, and community members.

Provost and Senior Vice President for Academic Affairs Joyce Jacobsen, who has been involved in the project, echoed the idea that the move will lead to more consistent foot traffic at the gallery.

“At the DAC right now, we’ll have an opening event, and a lot of people will come for that, and then it drops off pretty dramatically because it’s really not a central location,” she explained. “The other problem with the current space is they can’t really take any large acquisitions in because both of the storage conditions, being not enough space and because of the conditions of storage not being acceptable to all donors. So it seemed like it solved a lot of problems at the same time.”

More concrete plans for the space in Olin were generated in 2017, after moves to alternate locations like the Zilkha Gallery were ruled out due to limited space or subpar environmental conditions. In the initial phases, the project took some time getting off the ground due to pushback from University members who had ties to the original space.

“There was such, I think, an emotional tie to the Davison Art Center and the Alsop House than it didn’t seem as obvious for some folks that moving it to Olin made a lot of sense,” Rubacha explained. “So the project gained some momentum, and then it actually lost some momentum at some phase, when we took a step back to re-engage the constituents and have some conversations about that.”

Rubacha persisted with a feasibility study, designs, and further research about the needs for the space. The University Board of Trustees approved the plan in November 2018 with a $3.13 million budget, and construction began the following month. However, the process of construction brought a variety of new challenges. According to Rubacha, much of the original groundwork for the building, once revealed, was different than anticipated, and subsequently construction involved some creativity. One of these surprises was an old can of chewing tobacco from 1927 discovered during construction of the Olin basement. 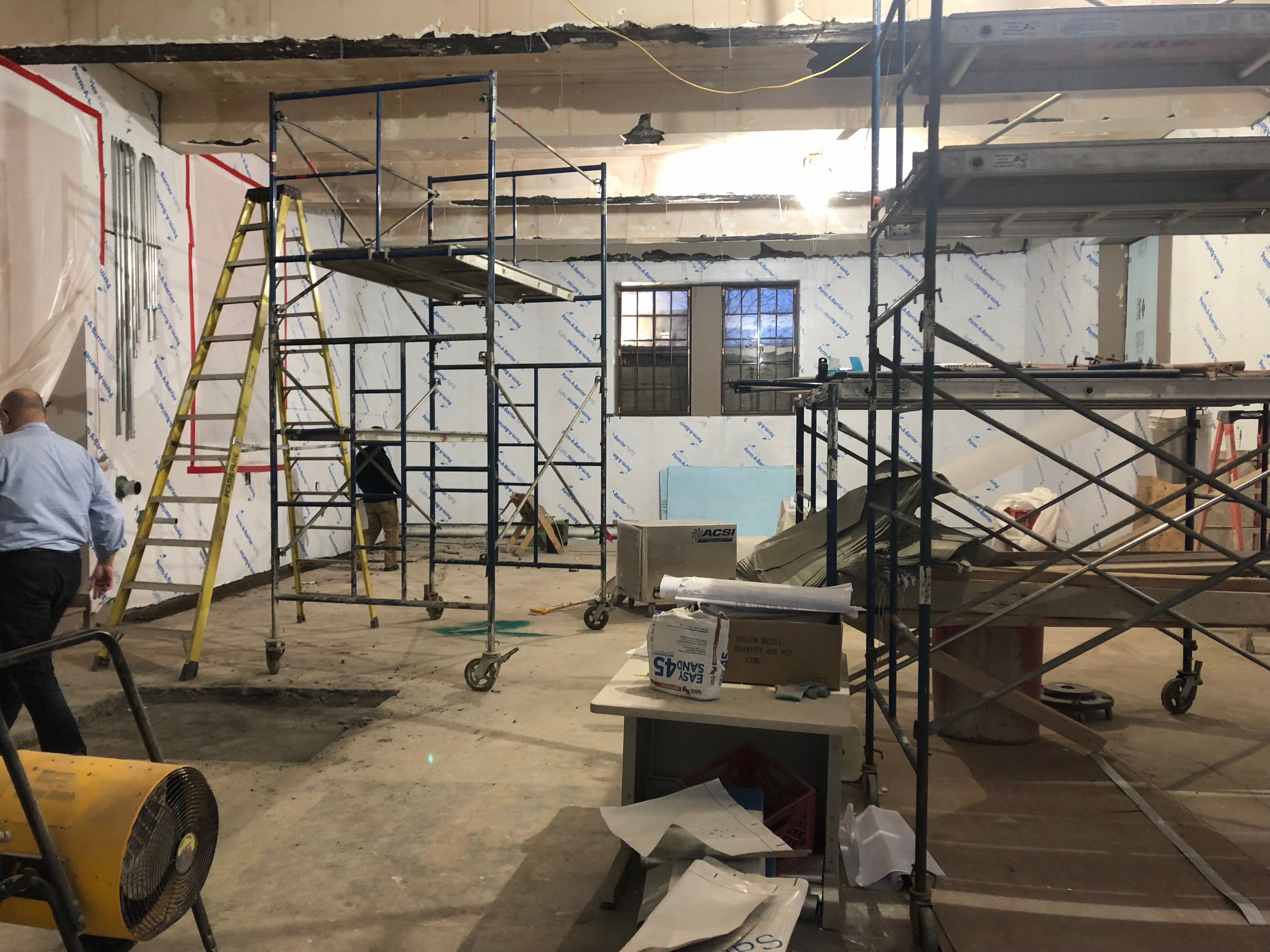 The space in the Olin basement slated for renovation was originally occupied by the microforms room. Last spring, the library staff started going through roughly 100,000 pounds of microfilms, a medium of film that Caleb T. Winchester Librarian Andrew W. White reported has been used very little since digital methods became easily accessible. The University retained approximately a third of the collection—the rare or unique microfilms that were not available online or in another medium—which is now kept on the third floor of Olin outside of the Music Library. The other two-thirds of the collection have been donated to various libraries throughout Connecticut.

The University art collections continue to be stored in the DAC and will be accessible by students and faculty members throughout the semester while construction takes place. Gallery exhibitions will also continue as usual, and no outward changes to the buildings will be discernible. The transportation of fragile material and prints is a complex process, according to Tokumitsu, so the move to Olin will need to be handled with care and attention. The process is scheduled to begin sometime in the 2019-2020 academic year.

With sights set on this project and upcoming construction of the Center for Film Studies, Public Affairs Center (PAC), and eventually the Exley Science Center, plans for future use of the DAC haven’t been formalized.

“It is definitely on my list of things to do—our campus’s things to do—is start to develop a program for that space,” Rubacha said. “We’ve batted around a number of things…. Right now, I think the leading contender is the expansion of the Digital Design Studio, we think, but we’re yet to engage folks in that discussion. It’ll be a campus discussion, we’ll engage a lot of constituents to understand what it should be, what it can be—talk about budget costs, limitations from the structure—and we’ll figure it out. But that’s kind of the next step, and it’s definitely down the road a little bit in terms of planning.” 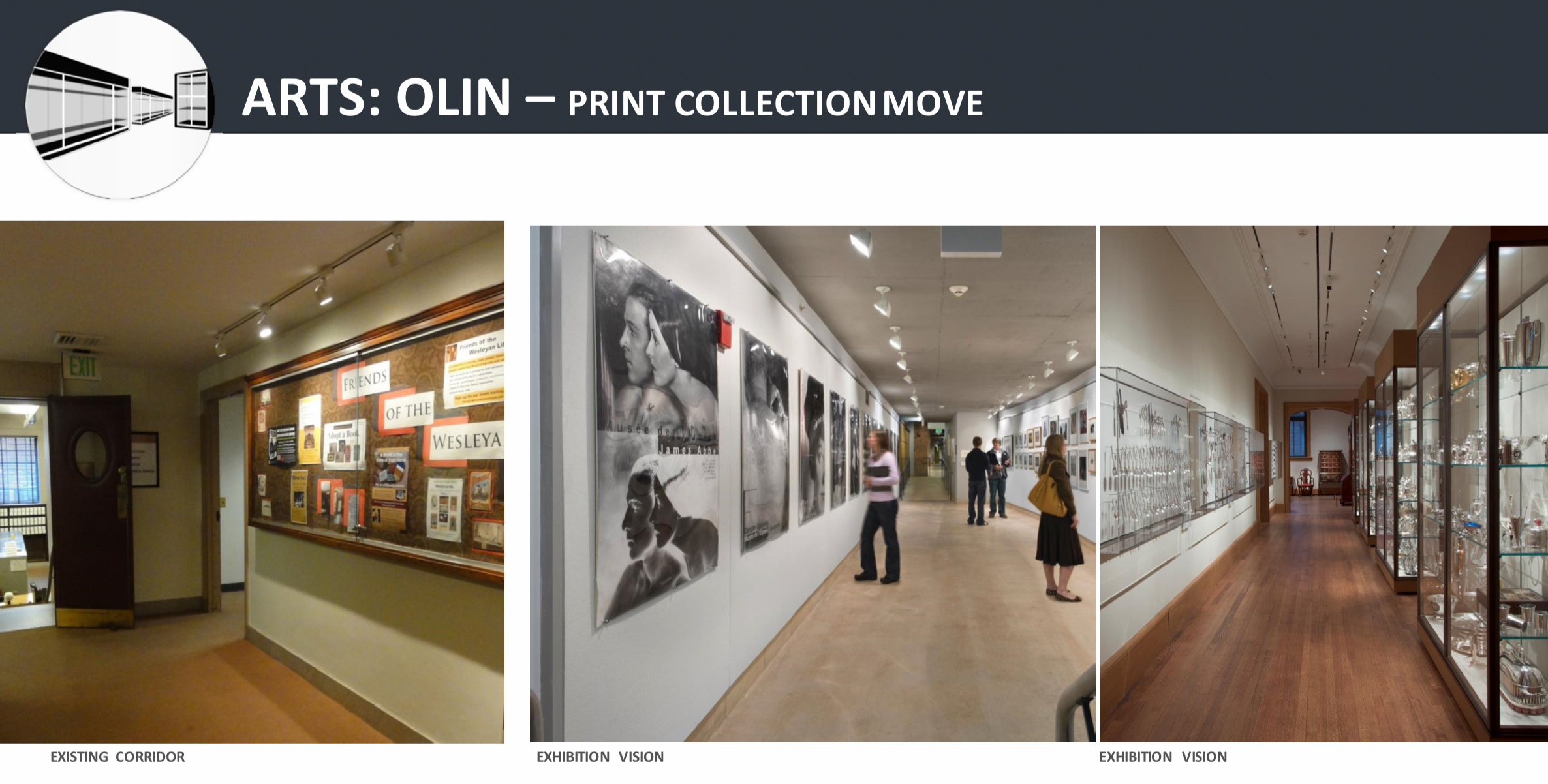 Building development involves two distinct elements: the construction of a corridor gallery joining Olin and PAC, where art will be on display, and the construction of a study and storage art space. The microforms room in Olin, as it existed until construction began, will be transformed into three separate rooms: the study space, the collection archive, and the art prep space. The print study space will be available for classes to book times to view the prints and others who want to see the prints, and the collection archive will serve as a storage space for the 25,000 prints—plus additional room for the collection to grow—and two computer stations that will allow visitors to search the catalog of prints. All of these spaces will be highly environmentally controlled, with emphasis on temperature and humidity controls. A lift service, ensuring the space is accessible and allowing for the transport of heavy pieces of art, will also be introduced.

The upcoming University renovations, however, extend far beyond the Olin basement. In 2014, an architecture firm, Sasaki Associates, conducted a study on campus and found that the adjacent PAC building is the most highly utilized building on campus but ranked very low in terms of student satisfaction. A project concerning major renovations to PAC has been merged with the gallery and Olin basement, crucially involving the link between the two buildings, to form one larger project with a timeline that stretches into 2024, when renovations to PAC are expected to finish.

“We’re exploring a project now, as part of the Public Affairs Center, to demolish that whole entire link and rebuild a building there to be the gallery,” Rubacha explained. “And how we imagine that is way up in the air…. Today, this probably feels like dead-end basement of the library, but this is the beginning of a huge development. It will just be flooded with light, people, you’ll hear noise, the activity, it’ll be really wonderful.”

An unrelated project is also in the works at the Center for Film Studies, which currently houses the Goldsmith Family Cinema, where the Film Series is held, and the 118-seat Powell Family Cinema. The University plans to build a 16,000-square-foot addition, which will include nine offices, a production studio, and a 50-seat screening space. Rubacha said that the project is currently out to bid, with construction expecting to start in May and be finished by August 2020. 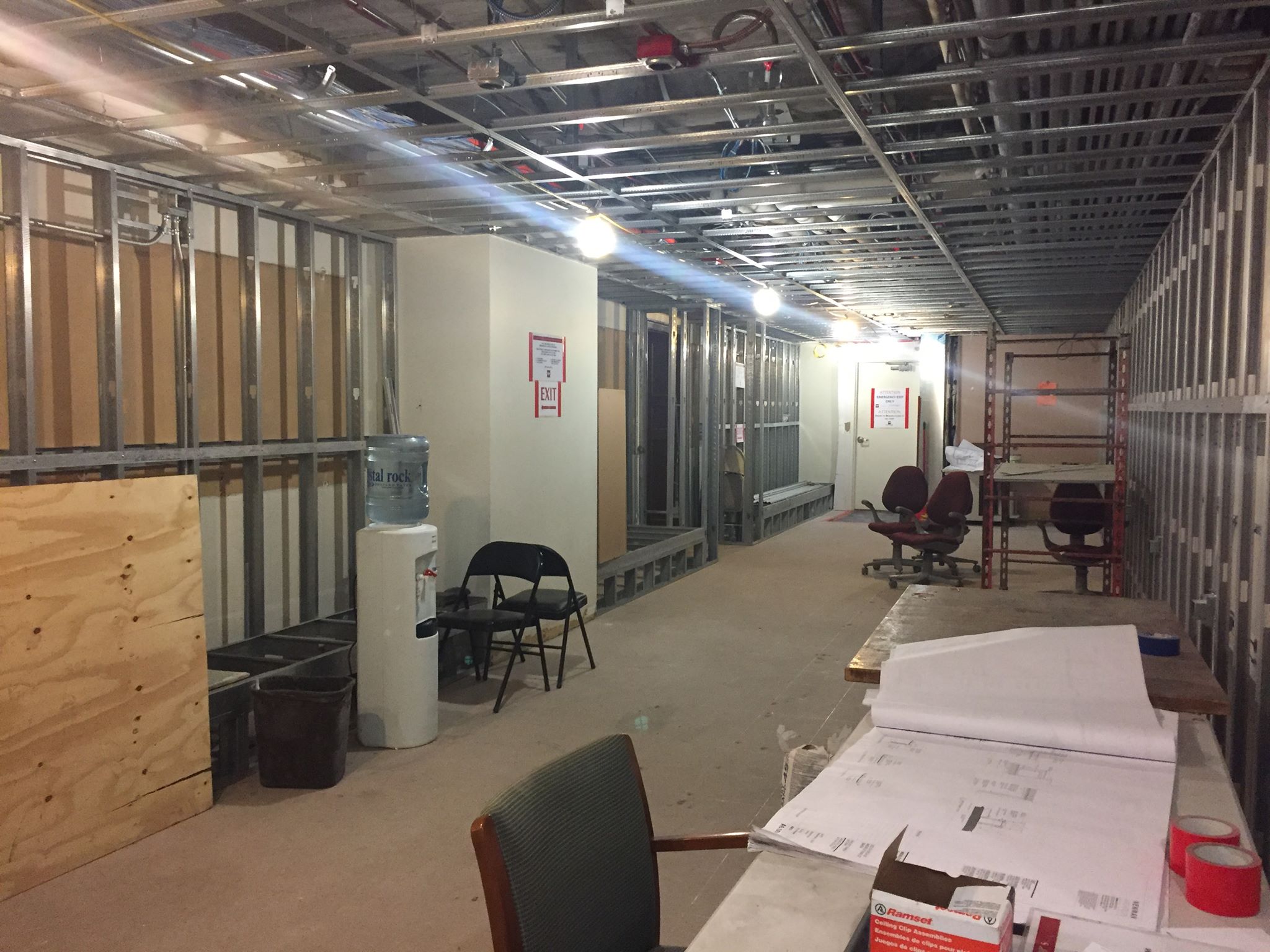 Construction on the Olin basement is expected to be completed on May 1, after which the addition of shelving, display cases, and telephone and data wires will take place, delaying completion of the project to the end of August. White and Tokumitsu both emphasized the care that will be taken in transporting the collection, and Jacobsen estimated that the gallery corridor will be open at the beginning of the following academic year, 2020-2021. Tokumitsu expects that the movement of the art collections and opening of the gallery will, ultimately, be a way to further integrate the arts into the University community.

“I love that we’ll be situated in between the library and also the Public Affairs Center,” she said. “I think we’ll get a lot of foot traffic by the collection, which is great for us, but I think it’s great for students, and also for faculty as well. I think it will make the DAC seem less like a fortress that people have to traverse, and more integrated into campus life. We at the DAC are very excited about the potential.”

With this movement will come a variety of opportunities for gallery showings and displays, allowing for a spontaneity that previously was less of an option because of the DAC’s location on campus.

“The idea is to have pop-up displays, maybe on Friday nights, also so that we can curate smaller displays,” Jacobsen said. “And then the hope is that, since people go through the library a lot, the more central location of having the print collection will make it easier for students—particularly the casual studier—to see them because they’ll just be right there anyway.”

White also emphasized the potential that it brings for Olin becoming a hub of student activity, apart from studying or checking out books.

Correction: An earlier version of this article referred to the art collection as the print collection, but beyond prints, it also includes drawings, photographs, paintings, artists’ books, and sculptural works.