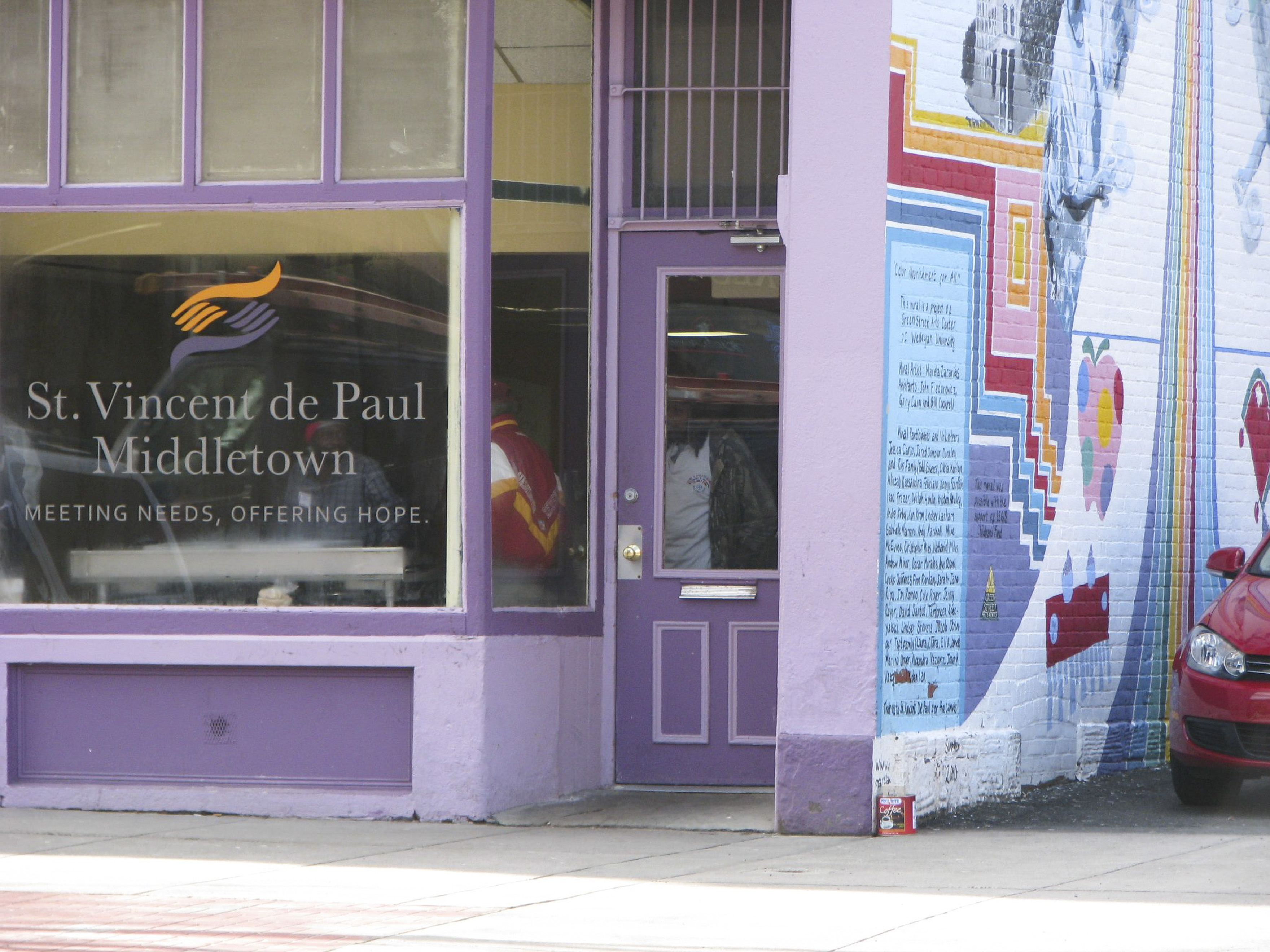 On Jan. 9, Middletown Mayor Dan Drew announced his support for St. Vincent de Paul’s bid for 51 Green Street, the former home of Green Street Teaching and Learning Center. St. Vincent, while primarily known as a soup kitchen, has offered a wide range of of services including housing and community assistance programs since 1980. As noted in a Facebook post, the city now has a non-binding agreement with St. Vincent’s to move the organization to Green Street, pending approval by the Common Council.

“You never know what happens,” St. Vincent’s Executive Director Ethel Higgins said. “Yes, Mayor Drew made the announcement that they awarded us the bid, but there are still steps to go…. [The Common Council is] the last step and, after that, then I can say, ‘Phew.’”

Since St. Vincent’s opened in 1980, it has occupied 617 Main Street, which Higgins plans to sell if operations move to Green Street. In addition to its role as a soup kitchen, St. Vincent’s hosts the Amazing Grace Food Pantry, which works out of 16 Stack Street, as well as community assistance programs, and a supportive housing program that directly supports 39 people. St. Vincent’s also offers more specialized assistance, like substance abuse counseling.

Ron Krom served as St. Vincent de Paul’s executive director for 12 years and wrote the proposal that Drew recently selected. Krom presented the proposal at an Economic Development Commission meeting on Nov. 13, along with the two other proposals for the building, given by the Community Health Center (CHC) and the Middletown Green Community Center (MGCC) respectively.

“We’ve outgrown our facility,” Krom said to the commission. “The space is inadequate to do what we do, and we have so many ideas of what we would like to do better.”

“It really was about space,” Higgins said. “And with space comes expansion, and with expansion comes new ideas and creativity.”

Beyond its current programming, St. Vincent’s also plans to expand the services they offer, including the addition of showers, lockers for belongings and valuables, and phone and computer access for their visitors. Higgins and Krom also affirmed their desire to create a general-purpose meeting space that could be used for meetings. Several other partnerships with local organizations are also in the works, including a potentially shared space with the local branch of the Community Access Network (CAN), so that the organization can offer private therapy sessions.

“Something works well, you don’t touch it,” Higgins said when asked about potential changes in the new space. “A lot of the focus will be on the new programs, if we are blessed enough to get this. To go ahead to expand the proposal…to work the community, the other agencies. It’s really just the next step, like the springboard.”

The building at 51 Green Street was formerly the Green Street Teaching and Learning Center, which was run through the University for 12 years and was primarily known for its after-school programs. The center was closed in June, with the University citing the costs of maintaining the center from year to year as the reason for its suspension of the program. As the space used to function as a community center, major renovations will need to take place prior to St. Vincent’s occupancy of the space, primarily to the building’s kitchen. Krom cited the organization’s $2.2 million budget in reference to the high cost that those renovations are likely to incur.

St. Vincent’s originally planned to move their soup kitchen and administrative offices, including 17 members of their 23-person staff, to the new building by June if they won the bid. As the vote was pushed back from November, Higgins says she now expects that those components of their organization would open in the new space in the fall at the earliest, with another phase of renovations and services opening in the coming months.

The Economic Development Committee recommended both St. Vincent’s and CHC’s proposals to Drew for his consideration, and from there Drew selected St. Vincent’s proposal. In his original letter, he explained how he made his decision.

“CHC rents or owns significant office space now,” Drew wrote. “While the availability of this building would help it as an organization, the building itself is not essential for the CHC’s growth.”

The vote confirming the building’s occupant has not yet been added to any upcoming Common Council agendas, according to a spokesperson for the council.

“This is a hard population, and people don’t want to deal with this population,” Higgins said, citing those that St. Vincent’s serves. “The fact that we’ve been doing it very well all these years speaks highly.”

Sasha Linden-Cohen contributed to this reporting.