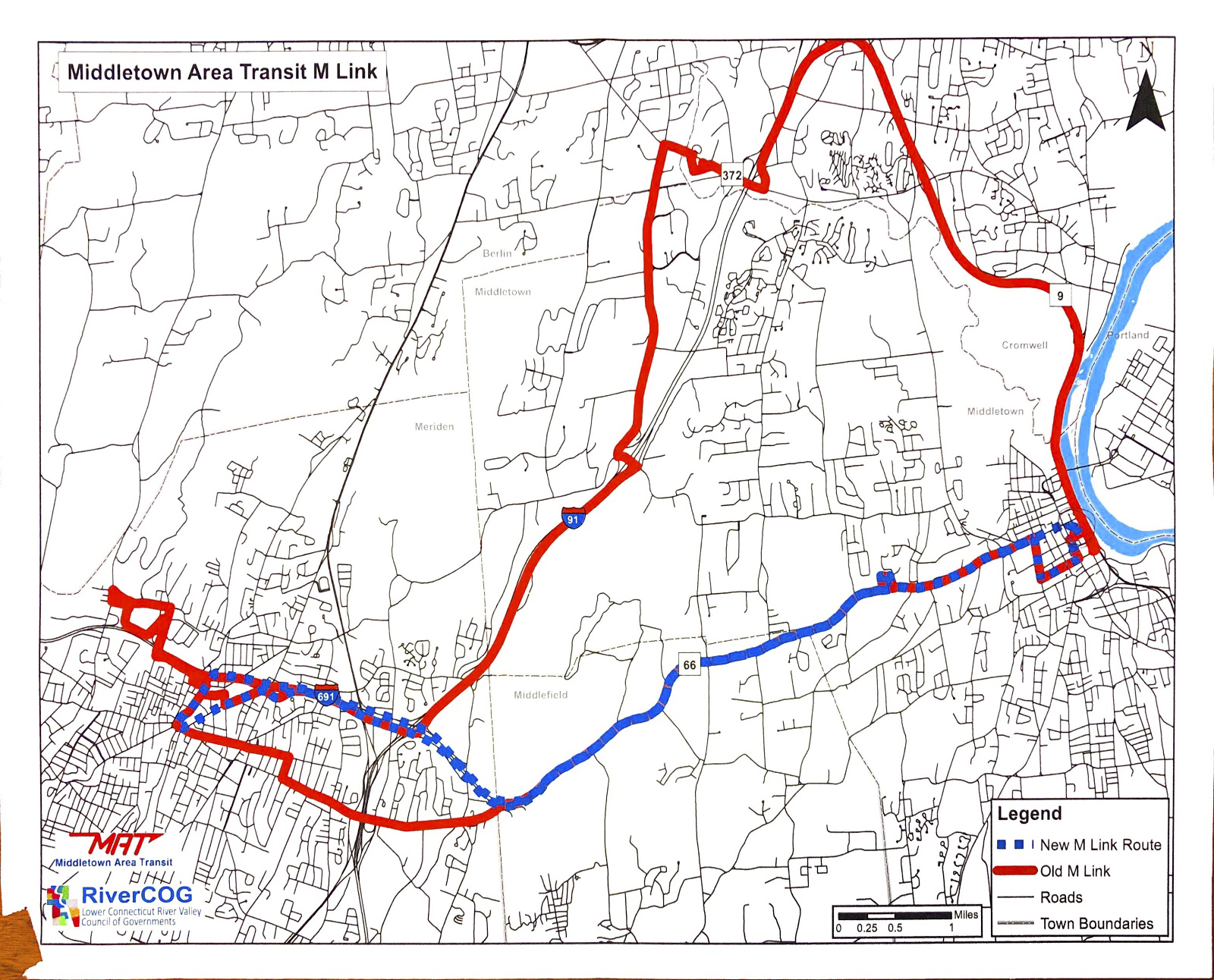 Members of the Middletown community gathered in City Hall on Wednesday, Nov. 28, for a discussion of proposed changes to certain bus service routes. The town hall allowed community members to learn about the changes and voice any questions or concerns.

One of the major route changes is the creation of a new M-Link Express route. According to Middletown Area Transit (MAT) Administrator Lisa Seymour, the M-Link route’s new express service will allow for five additional run times per day to get area residents to the Meriden Train Station more frequently than ever before. The M-Link is currently taking a non-express route to Meriden. The new route will cut the time it takes to get to Meriden by a substantial amount, allowing for speedier travel for residents and students.

“Now, instead of waiting for 40 minutes for a [train] connection [at Meriden], the connections are within 10 to 12 minutes,” Seymour said.

While the changes to the M-Link route were the biggest service announced on Wednesday, other routes are also undergoing some supplemental changes so as not to duplicate service provided by various routes.

These changes will affect MAT’s E Route, which will eliminate East St. and Congdon St. and take CT Route 372 and Route 9 instead. The service changes, at least for the M-Link, are also coming before the finalization of a study of area public transportation being conducted by MAT. While the study will identify additional changes that need to be made to service, the M-Link Express route is a more pressing change.

Seymour’s determination comes as a welcome change for many of the Middletown residents who attended the town hall. People reacted positively to the new plans, especially in response to updates about the M-Link which were met with cheers and claps. Seymour continued to explain why the M-Link fix is a necessary accomplishment.

The new M-Link service will reduce the current hour-and-a-half commute time for about 755 FedEx workers.

There was also discussion about the new stops that the new M-Link route will include, such as Athenian Diner on Washington Street and Wesleyan’s Fisk Hall. These stops will make it much easier for Wesleyan students to get to the Meriden Station without paying for Ubers or Lyfts.

The proposed changes have been spearheaded by Noah Kahan ’19’s Connect Middletown initiative. As previously reported in The Argus, the M-Link Express proposal is a part of an ongoing project to more sustainably connect the Wesleyan and Middletown communities to Meriden and beyond.

“Connect Middletown seeks to revitalize the M-Link service, a route serviced by Middletown Area Transit (MAT),” an article written by Kahan on the ENGAGE website reads. “This proposal strives to enhance Middletown’s connection to the wider region by keeping local M-Link service in place and launching M-Link Express, a modified route that will provide a faster ride to Meriden Rail Station…”

The only difference between the initial proposal Kahan worked on and the one brought forward at the town hall is that the old M-Link service will end. Now, other routes like the E, D, and C routes will be tweaked to supplement service gaps created by the new M-Link service.

Through the work of Wesleyan and MAT officials, the inefficiencies noticed in the M-Link route and MAT service in general will be addressed. It is only a matter of time before the proposed changes will become a reality for the community. Seymour concisely summarized the plans and the urgency for their implementation.

“We have plans for the future, but for right now, [the M Link] is something that is an immediate problem,” said Seymour.