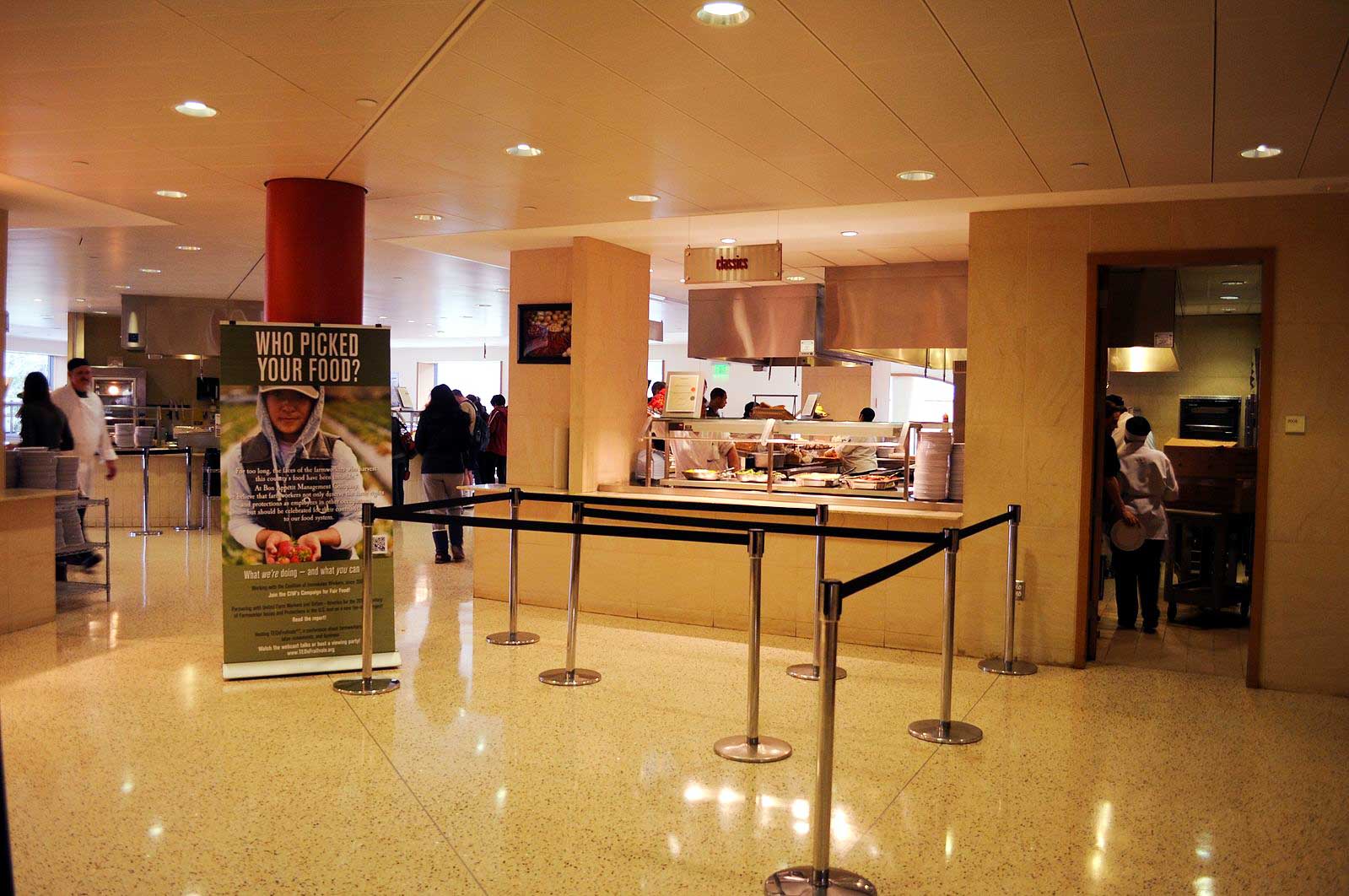 Johnny Hayes ’20 spends much of his time at Usdan behind the scenes, cleaning dishes. Between moving at the speed of the conveyor belt and trying to sufficiently supply plates and silverware for lunch and dinner rushes, Hayes’ job is all about timing and working efficiently as a unit.  If the job sounds hard and exhausting, that’s because it is. With a full staff and everything running smoothly, though, it’s doable.

When student co-workers don’t show up for their shifts, dishes are left out on tables and silverware bins are incorrectly used, the work piles up, and with it comes frustration as well. Hayes isn’t at all alone, as Usdan workers increasingly leave their shifts feeling stressed and, at times, disrespected.

Both Bon Appétit managers and student workers are aware that demand for Usdan jobs is low, especially compared to positions at WesShop or Olin. Part of this, of course, has to do with the difficulty of the work itself. Even for those not cleaning dishes, food service work just about anywhere is notoriously demanding. College class work and time-demanding clubs can make added stress and unglamorous work unappealing. In the last couple years, Resident District Manager Michael Strumpf acknowledges, Bon Appétit has had to work to fill the staff.

A student worker who asked to remain anonymous notes the problem created when workers know their jobs are not easy to fill.

“No one wants these jobs, so if people don’t show up, what are you gonna do, fire them?” they said. “Then you have no one. [All the workers] know that.”

Hayes recognizes this dynamic too, having been caught a few times in a severely understaffed utility room after coworkers didn’t show up. Fellow Usdan student employee Aiti Rai ’20 echoes Hayes’ sentiment, sharing that at times she’s had to cover multiple stations at once.

Bon Appétit is also lenient and forgiving by nature. Strumpf makes clear that he knows students are at Wesleyan for an education, not to work. When a worker tells him ahead of time they won’t be able to make a shift, he’s generally sympathetic and tries to find a replacement.

It’s worth noting that despite some students’ distaste for Usdan work, Rai and others feel they’ve learned a lot from the job.

“Here you learn so much,” Rai said. “We’re in a college, and it’s not the real world where you have to be fully responsible for [everything] everyday. So I think this place, if you take it seriously, will teach you to be more responsible, and you’ll learn more about food too.”

As an international student for whom English is a second language, Rai has had a special appreciation for work at Usdan.

“A lot of times, I won’t know the names for a lot of American foods, so working here has definitely helped me,” she said.

Far more significant among student workers than any grievances with Bon Appétit, it seems, is frustration with the behavior of student diners.

On Facebook, it’s common to see images of messy tables or overflowing silverware bins (with empty bins underneath) paired with exasperated pleas to clean up and take care of the space.  For Hayes, the added work students create just compounds the stress of the job.

“As time has gone on, the job has gotten more stressful,” he began. “The more people steal plates and forks from Usdan or don’t cleanup after themselves, the faster I have to clean.”

For Rai, it’s an issue of respect, a quality she sees as lacking in parts of the Wesleyan community.

“It’s kind of sad that we consider ourselves educated people, but at the same time if you look at our actions, I’m not sure that we are being educated,”  Rai said. “Yes, we are in terms of academics, but I don’t think that’s considered full education. Educated people have to be aware of their own actions…it’s one of the things that makes us not as smart as we think we are.”

Hayes points out that this disrespect goes beyond carelessness, to rudeness towards food servers. Often, people aren’t actively hostile or impolite, but aren’t as engaged and friendly as they should be.

“Interacting with students… that emotional labor can be hard,” Hayes said. “It’s fine when it’s just one person, but when you get four people who are kind of rude to you…I get exhausted.”

Strumpf has generally found the Wesleyan student body to be very polite and respectful, but does understand where some of the dissatisfaction comes from.

“When you join the other side, you look at things differently,” he explained.

Part of this respect gap, Hayes and Rai say, could be ameliorated by salary increases for student workers across campus, but in particular at Usdan, where much of the work is more demanding and frankly, less fun. With greater pay, they believe student work could become more sought after and in turn less looked down upon. If nothing else, a few extra dollars would make day-to-day life easier for lower-income students.

Bon Appétit management isn’t at all impervious to these concerns, having increased wages to $13/hour at the start of this year and promising to raise them again to $15/hour by 2020. Strumpf sees adjusting salaries to fit the times as a responsibility.

“It was my decision to be over minimum wage with the students,” Strumpf said. “It’s the whole feel of the country right now, and where things are headed – people working for a fair wage.”

It’s possible that increasing pay will bring the kind of cultural change that’s called for, but there are, Hayes and Rai agree, limits to what an institution can do. Hopefully the 2020 salary bump will create more demand for jobs, leaving understaffed shifts less common and work a little easier. Bon Appétit can improve worker conditions and Wesleyan can work to cut waste and carelessness out of its administrative culture, but that doesn’t mean the student body will change overnight, at least not without a tremendous amount of introspection and attentiveness to others.