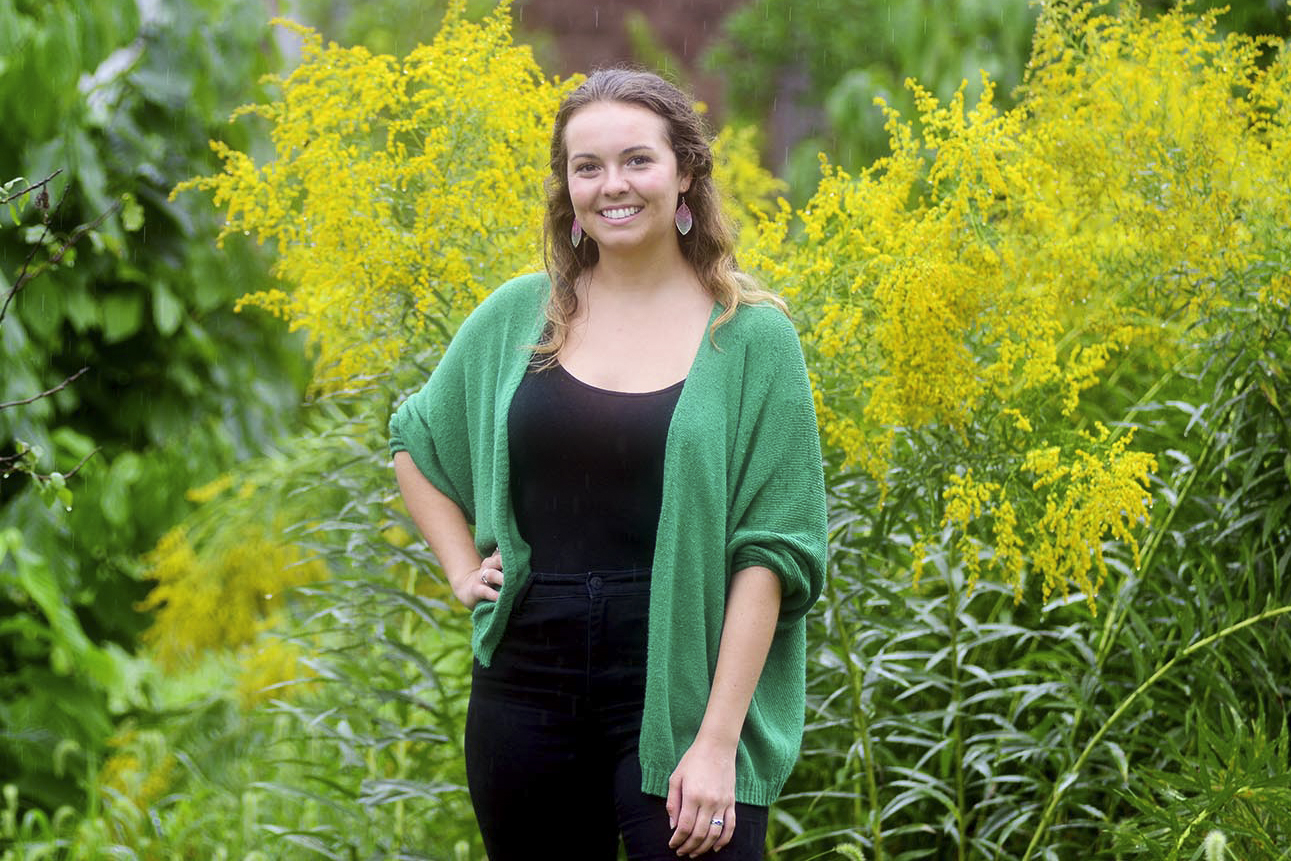 Middletown became one of 17 towns in Connecticut to receive a bronze sustainability certification from Sustainable CT in early October, joining a group of 22 municipalities that were recognized in the organization’s first round of certification efforts.

Getting to know how the city is run allowed Eck to begin collecting information on past sustainability initiatives to include in the city’s application. The application is divided into 10 “action categories” that are broken up into specific policies or programs that cities can use to showcase sustainability work in each of the 10 categories. After researching ordinances, programs, and organizations that Middletown has established and talking to an array of city departments and offices, Eck condensed and uploaded the information she collected to Sustainable CT’s website and submitted the application on Aug. 24.

“Without Ingrid, the City of Middletown would not have a Sustainable CT certification,” Wesleyan Sustainability Director Jennifer Kleindienst said. “Hands down.”

Kleindienst sees the certification as a recognition of the largely volunteer-driven sustainability work being done in Middletown and a confirmation that the city is headed in the right direction with its efforts.

“It’s very helpful for people who work within the city or who volunteer in the city to get that confirmation that Middletown is on the right track,” she said.

“We’re excited that there’s something to keep going towards,” Eck said. “What’s great about this model is that you don’t just get a certification and then you’re done. There’s always another level that you can push for and there’s also look-back periods, so some of the actions expire. If you get certified in one area, that doesn’t mean you’re going to be certified in that area forever.”

Eck see her work over the summer as essential to preparing for future sustainability work and her continued involvement in Middletown’s sustainability initiatives.

“I think a lot of it was not really doing actual work but more documenting what we’ve done in the past,” she said. “That’s okay because it’s good to map out where you are right now, but I felt like after the application was submitted on August 24, we could really start doing things instead of documenting things.”

Eck admires Sustainable CT’s broad take on the meaning of sustainability and the implications this had for initiatives required to be recognized by the organization. Evident in the certification application’s “Vibrant and Creative Cultural Ecosystems” and “Inclusive and Equitable Community Impacts” action items is the organization’s underlying understanding of sustainability as something that extends beyond the environmental.

As a part of her role this summer, Eck helped to host workshops for city officials that focused on equity as a central consideration of any policy or program. She sees Sustainable CT’s emphasis on equity as something that sets it apart from other sustainability organizations.

Michael Harris, Middletown’s Energy Coordinator and a member of the CETF, spoke similarly about this value of equity, but wishes that Sustainable CT would provide more reasoning behind why each action item is important. Harris believes in the power Sustainable CT has to educate officials on why some less-obvious aspects of sustainability work must be considered when making decisions. He places special emphasis on the equitable impact of sustainability work.

“It seems like there’s an opportunity that’s not yet being exploited by the program, which is to understand the thinking that led to these things becoming actions,” he said. “Why is equity, social and economic equity, why is that a sustainable action? I think there’s an educational component that’s yet to be brought into the program to help people understand better…how these things intersect and everyone having a fair chance at the basics as things get tougher going forward with climate disruption.”

Harris thinks that the city’s recent bronze certification will drive future work and values the guide that Sustainable CT provides.

“There’s a path clearly identified to silver,” he said. “So those things are going to be featured in the coming months. This first certification…there’s a lot of back-padding and acknowledging what you’ve got as a baseline. The next round of going from bronze to silver will drive new activity, and that’s what the program’s about in the first place.”

Reflecting on her summer, Eck sees her internship and the continued role she plays in Middletown’s sustainability initiatives as breaking down the invisible barriers between the University and Middletown.

“I hope that with time, we’ll recognize that Wesleyan isn’t cut off [from Middletown],” she said. “I’d like to imagine that eventually this so-called Wesleyan-Middletown divide fades away, and I think that through internships like this, this is how it can happen…. I’ve met so many people and they’re wanting to collaborate on different projects, and they’re coming to campus for events here, and I’m going to Middletown for events unrelated to Wesleyan, and I think that’s how you start bridging the gap.”

Eck is continuing to bridge this gap, working with members of the Climate Action Network and Professor of Biology Stephen Devoto, who chairs the Planning and Zoning Commission, to incorporate sustainability more centrally into the city’s Plan of Conservation and Development. This plan will guide many aspects of the City for the next 10 years, and making sustainability a priority is something that Eck and her colleagues are emphasizing.

“If we can incorporate sustainability in a true and holistic way into that plan, that’ll be a really big deal,” Kleindienst said. “There’s always more that Middletown can be doing, and there are different areas where there’s room for improvement.”

Additionally, Eck is working on an action plan to guide Middletown’s involvement with Sustainable CT and future Wesleyan students who want to become involved in the city’s sustainability work. She has begun conversations with students who might be interested in carrying on the work she started after she graduates in May. Eck is proud of the work she and her colleagues accomplished last summer and is excited to continue strengthening Wesleyan’s involvement in Middletown’s sustainability work. She hopes other students can get off campus to see the important work happening in Middletown and believes that future sustainability work in line with Sustainable CT will provide the perfect opportunity for students to get involved.

“It’s such a wonderful feeling to have a meeting at City Hall, because that means I have to walk 10-15 minutes off campus and I’m like ‘Oh wow, there’s this whole other life I have outside Wesleyan,’ and I love Wesleyan, but I think it’s healthy and good for students to step outside Wesleyan and see that they’re part of something bigger,” she said.