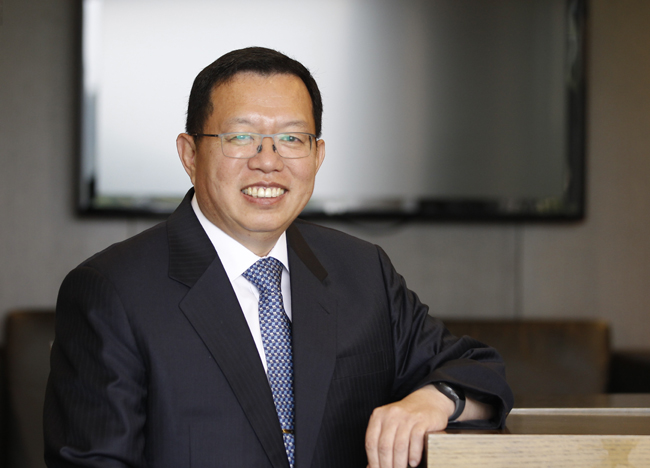 In-Bum Chun, a retired lieutenant general of the Republic of Korea (ROK) Army, visited campus to discuss developments on the Korean Peninsula following the recent landmark summits between leaders from North Korea and South Korea in April, May, and September of 2018. The afternoon lecture, held on Wednesday, Oct. 31, was hosted by the College of East Asian Studies, Fries Center for Global Studies, and the Allbritton Center.

Chun was a senior advisor to the Korea Corporate Members of the Association of the United States Army and a visiting fellow in the Center for East Asia Policy Studies (CEAP) at the Brookings Institution. His research continues to cover matters of national security, terrorism, and Northeast Asia. Addressing the historic and contemporary challenges of reunifying Korea since its divide in 1945, Chun began his lecture by drawing attention to the striking disparity between living conditions in North Korea and South Korea.

“Basic human life is dismal in North Korea,” Chun said. “Society is regulated by a caste system that divides the population by birth into hierarchical tiers where the bottom class, known as the ‘Hostiles’ or ‘Complex’ comprises 27 percent of the North Korean population and has approximately 300,000 individuals who are held in concentration camps. All of the horror stories told of the suffering of those imprisoned should be regarded as true.”

Chun further expounded upon the state of despotism in North Korea through detailing measures of routine surveillance and heavy indoctrination.

“In North Korea, systematic efforts of indoctrination are rampant and central to the teaching young people receive,” said Chun. “Propaganda-driven curriculum attempts to instill within younger generations intense anti-American sentiment as well as an implicit faith in their leader Kim Jong-Un.”

While a culture of fear and subjugation defines the experiences of many North Koreans, the remarkable economic development in South Korea since the 1960s continually provides a valued level of stability for South Korean citizens and bolsters the country’s global presence and influence. Cultural barriers between North Korea and South Korea become even more apparent with the emergence of the Korean Wave (Hallyu), a term used to describe the rising global popularity of South Korean pop culture through music, entertainment, media, and cuisine.

Reunification of the Korean Peninsula has been contested for many years on both sides of the 38th parallel. However, Chun argued that the discourse aiming for prospects of peace and potential reunification are entangled with the involvement of foreign interests of countries like China and the United States.

“The Chinese government desires to maintain influence over the Korean Peninsula,” Chun said. “For them, they know that if reunification comes under the terms of the South Koreans, the reunified peninsula will be a free, democratic country. Freedom and democracy is contagious. The Chinese would be uncomfortable—to say the least—by the implications of these democratic developments on the future of their foreign policy but more so, on how the relationship between the Chinese government and its citizenry could potentially worsen.”

A fractured Korean Peninsula is in the interest of countries like China, but for the United States, the spread of democratic ideals beyond South Korea and economic trade alliances align with American national interest. Chun emphasized that the presence of American troops on the Korean Peninsula also plays a significant role in the politics of and negotiations involved in denuclearizing North Korea.

“The main mission of American forces on Korean soil is to stabilize the peninsula,” Chun said. “They ensure that the South Korean military does not conduct offensive operations against North Korea that could disrupt current discussions between national leaders of peace agreements and denuclearizing North Korea.”

With such volatile negotiations in Korea, Chun does not believe reunification will occur any time soon and warned against forgetting that North Korea still represents a significant threat to national security.

“North Korea has shown us time and time again their immense capabilities for developing threatening nuclear technology and has held numerous private meetings with leaders from China,” Chun observed. “Trusting that North Korea would not attack without proper provocation would be unwise.”

Chun concluded his lecture by noting that the perspectives of South Koreans and the South Korean government regarding the prospect of reunification have shifted. As the reality of the political, monetary, and cultural barriers between North Korea and South Korea have become more evident, the dream of reunification becomes muddled. Rather than working towards efforts that would reunify the Korean Peninsula as quickly as possible, the South Korean people and government are in relative agreement that if reunification is still a feasible goal, it needs to be gradual and measured.

“The conflict on the Korean Peninsula and the prospect of reunification are much more complex than many narratives would suggest,” Chun said. “Now increasingly, factors such as foreign involvement, the furthering of independent national interests, and a growing divergence between North and South Korea no longer makes it appropriate to simply believe that because Koreans are a common people, the Korean Peninsula is destined to reunify. The path to reunification is long, and the recent summits are just the start of what I hope continues to be meaningful communications between global leaders.”