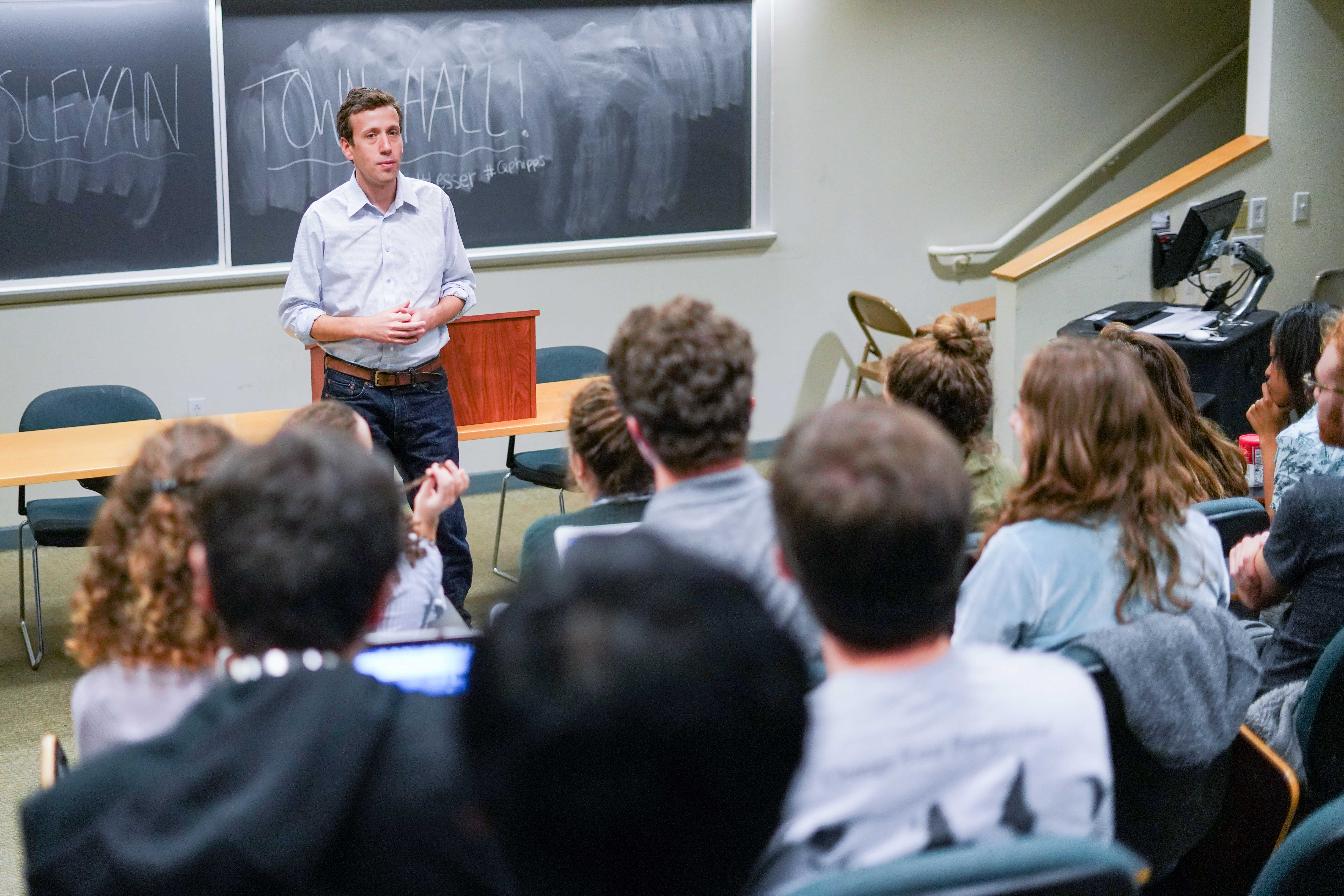 On Thursday, Nov. 1, various student groups collaborated to bring local State Senate and House of Representatives candidates Matt Lesser and Quentin “Q” Phipps to campus. The event, which took place in PAC, had an impressive turnout listening to the candidates present their campaign platforms.

Lesser, who attended Wesleyan until 2008, joked about his brief lateness, claiming he was “still on Wesleyan time.” His quirky and passionate approach to issues framed him as very evidently a part of the community. But Lesser was not just another student involved briefly with their college community before moving on to other things after graduation.

“I fell in love with the city,” Lesser said.

He is now a long-time Middletown resident, and his commitment to the city is very clear through his copious integrative enterprises.

While still enrolled at the University, Lesser was heavily involved in efforts to get students to care about Connecticut politics. He was elected as President of the College Democrats of Connecticut and organized the largest student voter mobilization drive in the country. His efforts increased voter turnout by nearly 700 percent at the University of Connecticut. He was selected to run as the second-youngest candidate for State Representative at the Democratic 100th District Convention, receiving endorsements from officials like the Secretary of State, State Senator, and Middletown DTC Chairman.

After leaving Wesleyan, Lesser realized that he wanted to dedicate his life to working to improve conditions in Middletown. He was elected into the Connecticut General Assembly and began working for the Planning and Zoning Commission. As part of the commission, he worked hard to protect the environment while improving basic living conditions. Lesser proposed the law that now keeps fracking out of Connecticut and is currently working on making this a permanent ban. He is also planning to increase the access of the Middletown community to the Connecticut River by getting rid of the sewer plant and building a park instead. This plan is already in action and is expected to be put into effect this week.

Lesser is a self-labeled “proud progressive” and is unremitting in his push for justice. Supported by groups such as Pro-Choice CT and the Connecticut Planning Party, Lesser prioritizes inclusivity in politics.

Improving healthcare is an issue at the top of Lesser’s agenda. A cancer survivor himself, Lesser spoke extensively about his experiences lobbying for improved legislation. After going door to door one day around Middletown asking people what they felt was important, he noted that every single person listed healthcare. Lesser, if elected, hopes to establish a single-payer healthcare system and to adopt a Massachusetts model of healthcare, which makes it easier to buy subsidies.

When asked about his top three issues, Lesser listed healthcare with paid medical leave, raising the minimum wage, and dealing with the cost of college. Another student asked Lesser whether current events such as CVS’s ownership of Aetna would create a pushback to pursuing the public option. Lesser answered that yes, in fact, it will. President Trump is also part of destabilizing public health care exchanges. Medicaid must be opened up and healthcare must be made accessible.

A born-and-raised Middletown native, Quentin “Q” Phipps followed Lesser in voicing his concerns about the future of Middletown and the state of Connecticut. Nobody knows the city better than Phipps. Also serving on the Planning and Zoning Commission in 2007, Phipps was unanimously elected as its Chair in 2009. He also served as City Treasurer in 2011 and was most recently re-elected in 2015.

Phipps’ non-political career reveals a deep care for children, advocacy, and problem-solving. As the Director of Advocacy and Policy at a school in Connecticut, Phipps deals with issues ranging from attempting to reconcile the achievement gap along racial and economic lines and working to provide unconditional support to every child with which he works. The low-income background of many of these children gives Phipps an even greater sense of responsibility.

The many charitable and service organizations that Phipps has worked with exemplifies his commitment to a range of issues. He takes pride in his involvement with the Middletown Racial Justice Coalition as a steering committee member, the Middlesex Substance Abuse Action Council as part of the Board of Directors, and as President of the Connecticut Young Democrats group.

Both candidates faced increasing hostility along prejudiced lines in their efforts to campaign and run for office. Just recently, one of Matt Lesser’s opponents spread a highly anti-Semitic poster around the Middletown area. Phipps also recounted an anecdote of how one of his opponents slandered him after shaking his hand and agreeing to keep slander out of his campaign. A Facebook group was also created to oppose Phipps’ campaign that attacked him with racist slogans.

In the face of adversity, both candidates expressed exemplary resilience. Lesser talked about the importance of understanding one another and pushing past prejudiced sentiments.

“The point is not about perfection, it is about being better,” he said.

Lesser believes that we must all try to find a way to come together. Phipps agreed with the need for unity, but also talked about holding each other accountable for our actions.

Connecticut citizens cannot afford to sit back and watch as people head to the polls. The candidates expressed the urgency of voting today, as we need to pool together every voice we can in the name of justice. Lesser and Phipps believe that this can be done through getting the vote out.

“You will remember fighting for democracy for the rest of your life,” Phipps said.

Claire Isenegger ’21, one of the event’s organizers, also believes that it is critical to get the vote out now more than ever. The event was meant to familiarize students with the candidates who will hopefully represent Wesleyan and the interests of its students in the future.

Isenegger hopes that people who attended the event will also be encouraged to volunteer and to think about what they want candidates to focus on in their campaigns.

Although voting registration has closed in Connecticut, anyone can vote on election day through designated Election Day registration locations. Echoing Lesser and Phipps, voting in Connecticut can have perhaps more of an impact today than we realize.