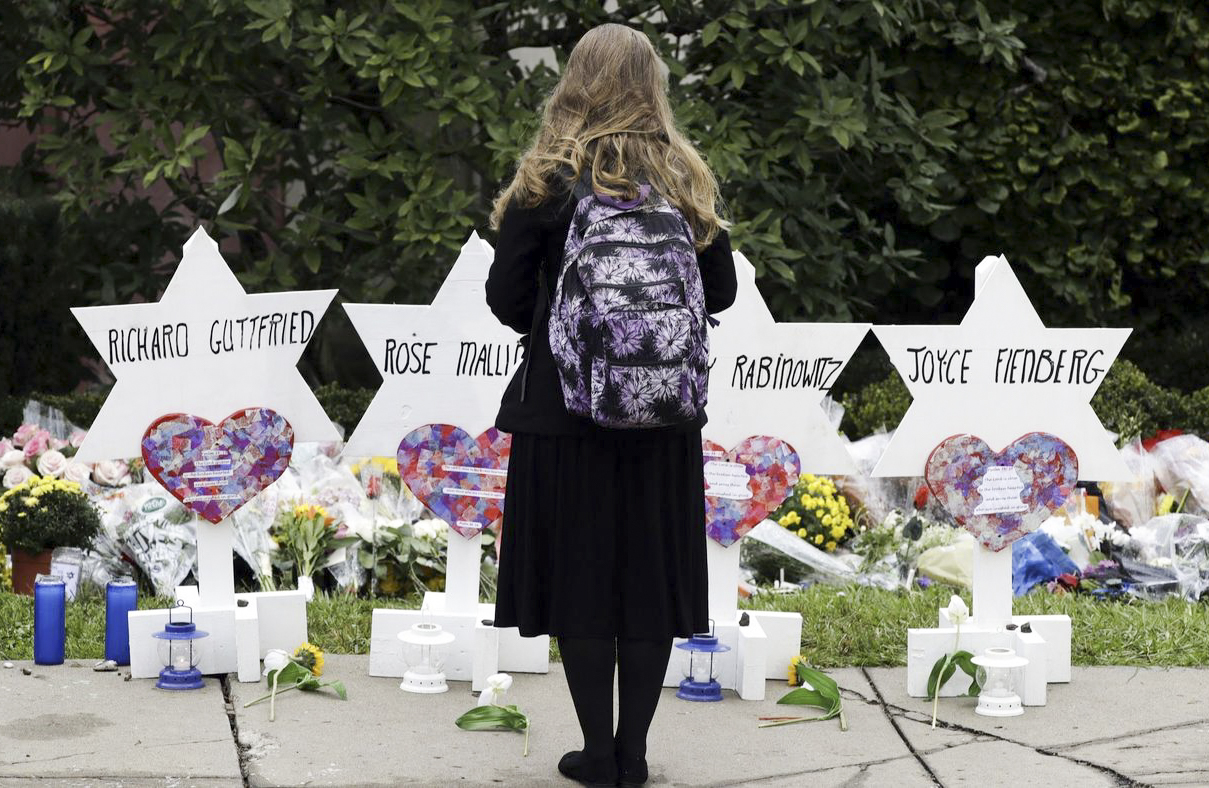 Some last names have been left out at the request of those individuals interviewed.

On the morning of Saturday, Oct. 27, a man opened fire at the Tree of Life Synagogue in Pittsburgh, Pa., killing 11 people and sending the American Jewish community and its allies into a state of mourning. In light of the tragedy, Wesleyan students sprung into action, organizing a community event for that same evening to create a space where people were able to sing, grieve, and process. On Sunday evening, Middletown’s Temple Adath Israel held a vigil in remembrance of the 11 victims. On Tuesday evening, several students held an anti-Semitism teach-in and conversation at the Bayit. Though this event was planned before these acts of terrorism were committed, the timing was apt, and the discussion was opened up to allow for Jews at the University to vocalize how they are processing the recent tragedy.

Some students have struggled with the reality that college life and busy schedules are not conducive to grief. Processing takes time, and actually internalizing the implications of Saturday’s massacre would demand a lot from students.

“It’s rough because I haven’t even had time to reflect on how I am feeling,” one student, Josh, admitted.

For many Jews who did not face any violent discrimination growing up, coming to terms with the fact that anti-Semitism is once again on the rise in this country is disorienting. Fear of persecution permeates Jewish cultural memory, and while many young Jews, myself included, have long brushed off the “it-can-happen-again” rhetoric perpetuated by our grandparents and our schuls, tragedies like this serve as a harsh reminder that our people’s victimhood isn’t necessarily relegated to the past.

“The first person I called was my grandma because she grew up in a time where anti-Semitism was a very visible and non-stop occurrence, where she would come home and see a swastika painted on her front door,” Josh said. “And while I personally may not have experienced that growing up, we are in a current period in history where anti-Semitism is again on the rise. It never went away, but it is much more visible now than it was before the election of Trump. And it’s just manifesting itself in so many ways that are threatening to our community, threatening to Jewish people in the United States and around the world.”

For another student, Aviv, this event served as a reminder that her Jewish identity bears weight and makes her a target, especially in the radical leftist movements that she has recently been involving herself in.

“Prior to this, I’ve been getting really involved in anti-fascist spaces, in spaces where I am typically acting as an ally,” she said. “And it was suddenly this moment on Saturday where I was like, ‘holy shit, I shouldn’t take some of the risks that some of these white non-Jewish people are taking in these spaces.’”

A couple of weeks ago, she was considering going to Providence, R.I., to protest a Nazi rally. Though she ended up staying in Middletown for logistical reasons, Saturday’s shooting was a wake-up call for her, a reminder that it means something different for her than it does for her non-Jewish white friends to confront such hateful and violent groups.

“I need support from specifically non-Jewish white people in my life to [acknowledge that] it means something different if I’m going to go to a space where Nazis are or anyone in the violent alt-right,” she said. “That I need protection in those spaces.”

Aviv also works at a Hebrew school in Middletown and has been forced to consider the fact that a situation might arise where she would have to protect her students.

“I think the other teachers and I recognized that now our job takes on this whole new [meaning], and that we have to be prepared for escalating violence,” she said. “And yet we haven’t really been given the tools to do that or [learned] what our role is now.”

Some have also struggled to reconcile the substantial political undertones that come with being Jewish, especially on a campus as left-wing as ours. During this time of grief, some students want nothing more than to publicly embrace their Jewish identity. But at this University, students explained, it is difficult to depoliticize that. Articulating that you are in pain because of your Jewish identity usually demands a defense of your politics, or at least an explanation that Judaism and Zionism needn’t be conflated. During the discussion after the anti-Semitism teach-in, several students lamented the fact that Jews are often treated with a guilty-until-proven-innocent attitude and that many leftist spaces on this campus make them feel like they constantly have to prove that they are progressive enough to be there. Several students recalled times when friends or acquaintances have called them “one of the good ones” or insisted that their identity and their beliefs were contradictory. And for religious Jews, this attitude is only heightened.

Joy Feinberg ’19 was pleased by the fact that during the discussion, students were quick to acknowledge the particular kinds of leftist anti-Semitism that more religious Jews face, both at the University and beyond.

“I think there is somewhat of a general misunderstanding that all religious Jews are conservative or Republican,” Feinberg said. “Coming from a really religious background, I’m hardly the most liberal person in my community, and I draw on a lot of my very religious, very orthodox, very practicing friends for support in radicalism and political activism. And there are so many young liberal, orthodox Jews, who just don’t have access to spaces like the University, because of things like kosher not being fully accessible and Shabbas being really difficult. So it’s important for me to see that people in spaces like this are really welcoming to traditionally observant Jews.”

Yael Krifcher ’19 has been touched to see how the Jewish community has come together in the wake of tragedy and is glad that people are taking conscious measures to do what is right for them during this period of mourning.

“My grandparents live in Squirrel Hill, Pittsburgh, so this very literally hit very close to home,” she said.  “I think that the different ways the Jewish community has come together and organized and communed around this event has been meaningful for me to see. I put together, with the help of other community members, this event on Saturday night…to [create] a space and an opportunity for Jews to come together and to sing and share how they were feeling and engage, day-of, with the event. And for some people that ritual was really meaningful. And for some people, what they needed to do was come to a teach-in on anti-Semitism and have a space to talk really explicitly about the complicated nature of anti-Semitism. And some people have needed to withdraw from the situation. And some people have needed to talk to their non-Jewish friends and seek support outside of their community because community can be really enriching and restorative, and community can also be heavy and a burden and difficult to escape from. So I’ve been moved by people doing what is right for them—in a lot of different ways.”

Still, Krifcher recognizes that she must also try to confront the complicated circumstances that surround this event. Two Black people were shot in Kentucky this past week, she explained, but this act of terrorism received far less national coverage than the Pittsburgh shooting. How can we grieve, she wondered, and still acknowledge that our grief is biased?

“I think that the next step that I’m thinking about is how to move from this place of mourning into a place of not only action, but grappling with the complicated things that come with this event,” Krifcher said. “[Like] how to grapple with the fact that as badly as the Jewish community in America needs allyship now, the Jewish community in America has not always been an ally to communities in need, to other marginalized communities. How do we grapple with that in light of this event and in spite of our mourning?”

It’s hard not to feel guilty for internalizing more deeply tragedy and violence that seems close to home, but this feeling has prompted Krifcher to reflect on the ways in which she hasn’t always been a perfect ally.

“Knowing now what I know about, what I’ve needed from my friends to support me in this moment [makes me wonder]…in what ways have I failed other people in moments past when they needed my support?” she asked. “That has been really hard to reckon with.”

While Krifcher has been touched by the support she has felt from the the Wesleyan Jewish community, she also understands the ways in which that community can be isolating and hopes this tragedy can serve as an opportunity for Jews to come together in a meaningful and productive way.

“I want so badly for this to be a moment where people who want community and want Jewish community can come and be a part of that,” Krifcher said. “I want that so badly for people, and yet I know that it doesn’t feel accessible for all Jews on this campus. I think that’s been really hard, realizing that in this moment when I want unity and togetherness, the rifts that tear apart American Jewish communities are still so real and so prevalent and are manifesting even now in this moment of trauma. And that’s heartbreaking.”