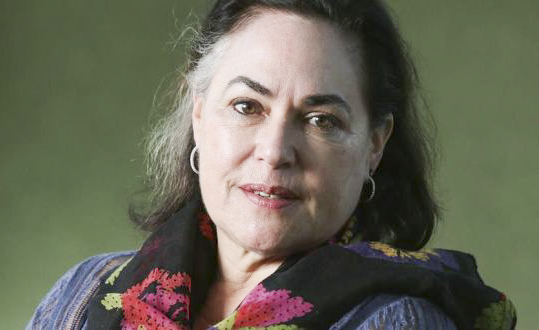 The event has been going on for several years on campus, but Bloom describes that there has been a shift this year.

“Usually I do Table Talk once a month, all year long,” she said. “But I’m not on campus this year and I felt guilty.”

While this may have hindered the process, Bloom wanted to keep the event going, even if it meant holding fewer. Table Talk is a collaborative space for writers and those who like writing to meet and discuss their own work, and also receive insight from Bloom, who has spent years in the industry. Though she appreciates any questions about her work, she explained that she is not too keen on only talking about herself.

“I’m possibly slightly more interested in your work than I am in mine, because I spend all day long with my work,” she said.

As she continued to talk about her expectations for these meetings, her philosophy surrounding the subject was summarized with a concise aphorism.

The structure of this first meeting was almost like a Q&A, but the space allows for mutual collaboration. People asked questions that prompted Bloom to offer salient life advice for the avid writers in attendance. A common theme throughout the talk was that she feels immensely grateful for the life she has lived.

“I feel unbelievably lucky that people who are not related to me by blood or marriage read my work,” she said.

One question that she saw as extremely important was posed by a senior, who asked about how much writers should read.

Bloom continued off of that point to discuss her relationship with poetry, which has often been tumultuous. To provide insight, she told the group a story about her daughter, who happens to be a talented poet.

“So, for my youngest daughter’s 16-year-old birthday…I wrote, like, a little birthday poem for her,” she said. “And you know that something terrible has happened when you are being condescended to by your own 16-year-old teenage daughter.”

Bloom explained that this, while disheartening, did not stop her from reading poetry all the time, proving her point that you need to read as much as possible from all different genres in order to be a writer.

When asked about her initial purpose for writing, she stated that it had always felt like something that was done as a job.

“My dad was a journalist, so I didn’t grow up with writing being onerous,” she said. “It was like being a plumber. It was a way you make a living.”

This mentality did not limit her creative process, and after working as a psychotherapist, she became inspired to write a novel.

Bloom also works in television, and in 2007 she created the show “State of Mind,” a comedy-drama that aired on Lifetime. One student asked her about the prospects of getting somewhere in the film and TV business, and she discussed the connections that the University has to offer.

“Wesleyan has a lot of alumni in the business,” she said. “In Hollywood, there’s this idea that there’s this ‘Wesleyan Mafia.’ I don’t find them to be as actually effective as the mafia, but it’s not nothing.”

The biggest advice she had for someone going into this specific field, though, was simple.

“Shyness will get you nowhere,” Bloom advised.

As the discussion was nearing a close, a student asked about the ethics surrounding writing someone else’s story. Bloom, in both a comical and poignantly serious way, stated that any story can be yours.

As the talk concluded, people began grabbing leftover wine, cheese, and M&M’s on their way out. As students walked out of the room, Bloom called out to them and expressed hope for more communication, even if not in the format of Table Talks.

“Also, honestly, if you want to ask me a question, that’s fine,” she said. “Now we know each other. I’m not hard to find.”