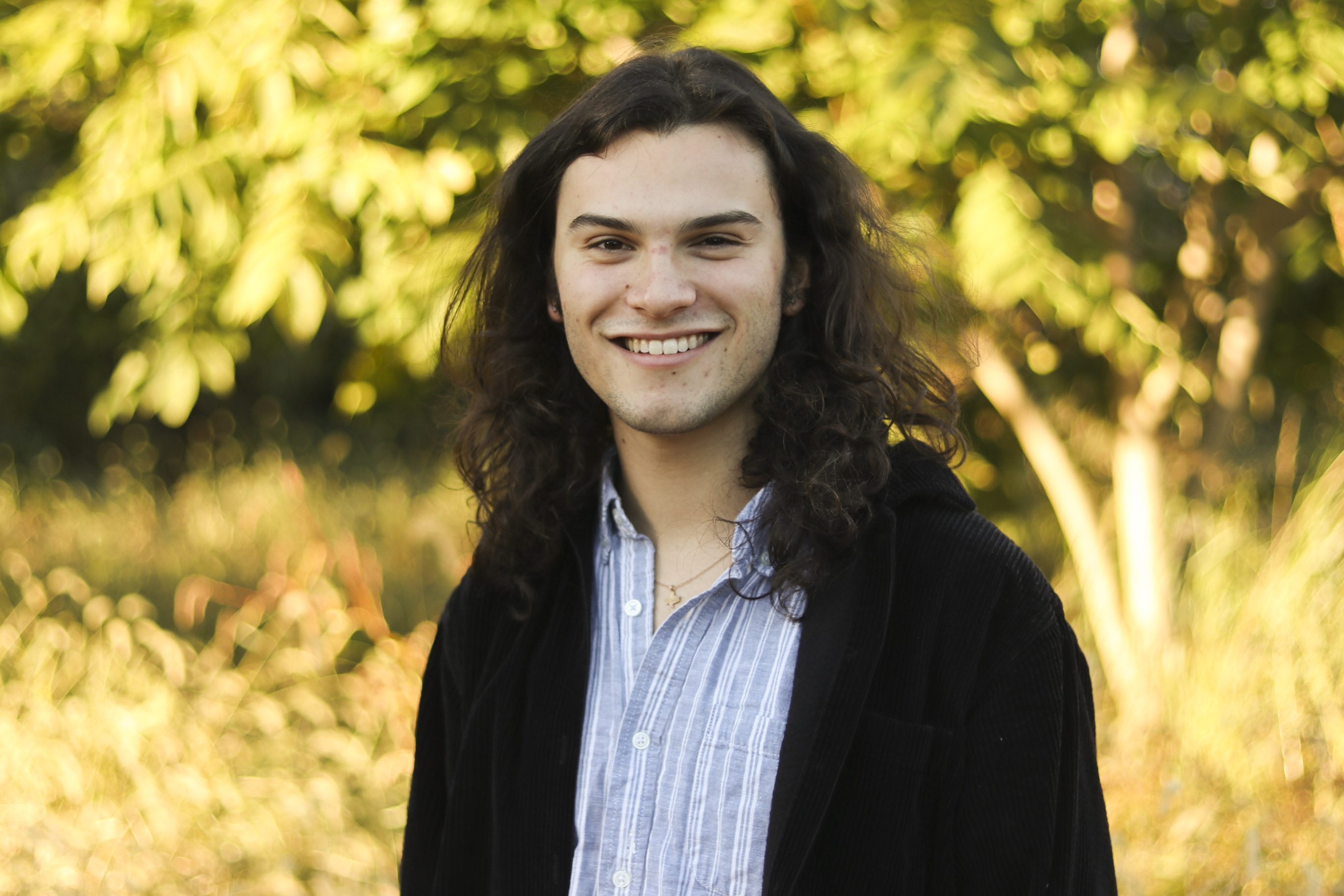 You’ve probably seen Nick Yeager ’19 and his flowing locks breezing around campus, or maybe you’re even taking his current student forum, Critical Perspectives of Texas. The Austin-born WesCeleb is best known for his sincerity and as an emblem of Southern warmth. The Argus recently sat down with Yeager to talk about his time at Wesleyan and of course, the Lone Star State.

The Argus: How long has Texas been a big part of your identity?

Nick Yeager: The longer I’ve been away from Texas, the more it becomes a part of my identity.  Freshman year, I came into Wes with Austin pride, and over time I got even more proud of Texas as a whole and have added more Texas related things to my wall. A lot of Texans who go out of state hang those big Texas flags in their dorms, and at the beginning of college, I was like, “Oh God, that’s tacky.” But now I fully get it. I kind of want one.

A: Tell us about the student forum you’re teaching.

NY: So I’m teaching my Texas student forum: Critical Perspectives of Texas. It’s Texas, but through an American Studies lens, looking at electoral and racial history, Texas’ unique relationship to colonization, cowboy culture, etc. It’s been fun. It’s fun for me to study my state and learn about all the interesting political and historical makeup. It’s a very issue-based class, people can come in and bring up whatever they’d like to talk about that day. It’s a huge breadth which I kind of knew going in. There’s so much going on in this huge place that it can be difficult to narrow it down, but it’s a good problem to have.

A: How have people been responding to the class?

NY: It seems like people are responding to it well, and I’m glad people are kind of getting to see the more nuanced issues surrounding Texas. A lot of it is about the influence that Texas has. At a place like Wesleyan, no one thinks about the middle of the country, but looking at a place like Texas and the huge power it has in America right now resonates with people. There’s also such a California-Texas rivalry, but I think it’s one-way because no Californians have heard about it. Republican lawmakers are always like “Don’t make Texas California” because we’re both border states, but one went blue and because of other historical and cultural factors, we didn’t.

A: You went back to Austin for Fall Break. What was that return like?

NY: I usually never go all the way back to Austin for Fall Break. I got to vote, which was great. I really need to make some calls [for Beto]. It’s always just nice to be there. Nothing is more relaxing than being home.

A: Did you go home to volunteer?

NY: I was doing voter registration all summer, but I didn’t canvass over fall break. There were lines at every polling place which is exciting, but there definitely need to be more polling locations. I was looking at the map of campus polling places at UT Austin, which there are supposed to be seven, but in past years there’s only been one. This year we had two, but that’s still ridiculously low for the amount of students and residents in that area.

A: You’re also pretty active here on campus. Could you tell us a bit about the work you’ve done?

NY: Yeah, I did Title IX stuff for a long time. I was one of the committee members on the Student Title IX Committee basically to provide more Title IX support and resources to students on campus. I also facilitate Bystander Intervention trainings. I like to do a lot of creative writing on campus and try to get poetry and short little journal-y things published in lit mags pretty often. I’m working on writing a lot of journalistic stuff right now. In past semesters, I did a lot of work with SEMI (Students for Ending Mass Incarceration). This semester, I’m doing CPE (Center for Prison Education). I volunteered with them on campus starting my sophomore year, and this year I’m tutoring with the women at York. I’ve only been in the facility this semester, and I’m in a study hall. In past years, I’ve done on-campus work like checking out books and finding out what people need. My specialty, I guess, is as a writing tutor to help people with writing assignments. I was really excited to get to go into the facility, that’s been building up for me, and I’m learning a ton in terms of legal nuance that goes into running a program like this and a lot of people that go into making it work. It’s really meaningful work, and you can tell a lot of the students are really committed. Many of them already have an Associates’ Degree, which is the highest degree you can get, but are still taking classes because they are that dedicated.

A: How did you first get involved with the CPE?

NY: Sophomore year, I decided I really wanted to do it, and anyone can do on-campus stuff the first year they apply. I got to do some work my sophomore year on this reentry guide for ex-offenders in need of resources coming out, so I got more acquainted with the organization, and how they helped amass that set of resources. It was mostly things like finding nonprofits, finding housing, and there was also medical care and lists of food banks. Any form of support to make re-entry easier.

A: Did growing up in Texas inform your passion for prison activism? (For those of you who don’t know, Texas is the private prison capital of the nation.)

NY: I honestly didn’t know that Texas was unique with its prison issues until I started doing research with my class. I just left high school really wanting to get involved in social justice issues, and Wesleyan was by far the most political landscape I had ever been in. As lovely as Austin is, it has very serious race problems and, up until recently, a lot of apathy towards certain issues it should be addressing. These were things I only learned after leaving it.

A: How do your friends and family in Texas react to you teaching a class about the state?

NY: It’s fun. I’ve thought about potentially trying to be a professor, so people are like ‘This is perfect for you,’ and it’s a fun way to talk about Texas and how fascinating it is. My mom is from the Maryland suburbs of D.C. and lobbies for public education funding in Texas, so she’s very involved in the political sphere. It’s fun to figure out what I’m learning and my focus on the cultural and social study and compare it with her political end. It’s interesting to be “the Texan who leaves Texas,” but I’m also really jealous of my friends who go to UT who have a more localized education, like they have on-site border study classes and things like that. I felt like I had to do it, being in Connecticut, whereas my friends in Texas don’t feel the need to obsess over it the way I do.

A: How do you think Texas has changed over the years?

NY: Austin’s growing so much, and I think a lot of bougie gentrified crap is taking over in a way that is really sickening to see. One because it’s racist and it displaces people, but it also really feels like the soul of nice, unassuming old hippie Austin is dying. I’m constantly noticing new structures and new developments. I try to take a picture of the skyline every time I’m there because the skyline is so much bigger than it was back in ’98 when there were only four large buildings. The traffic is also really bad now. It’s not a large city, but there are massive amounts of people moving in, and they haven’t advanced the infrastructure to accommodate the amount of people there are. But I still love it. Despite how much I kvetch about it.

A: Do you think Austin is still weird?

NY: I’d say Austin is still weird. Its spirit shines through, but I’m not sure. A lot of people are like, Austin is dead. I’m sure that’s a popular sentiment, but I feel like I still have the beautiful, weird part of Austin I’ve carved out for myself, and I have friends who keep that alive when I go back. I do think it’s becoming very standard gentrified-American-city in a way that loses its original character. I’m not sure if I want to live there later in life because it’ll be so different from the city that I love. I want to believe that it’ll be its authentic self moving forward. I don’t know. People talk about the Green Belt, the river that people hang out in, how that’s the only thing that hasn’t changed. As long as Austin has this connection to nature and unpretentious creativity, it’ll still be itself. I think.

A: Any last message to Texans, or non-Texans alike?

NY: Vote for Beto! Democrat straight ticket! I really have hope for the future of Texas. It’s gonna turn blue one day or another, hopefully next week. The country better be ready.

Brooke Kushwaha can be reached at bkushwaha@wesleyan.edu and on Twitter at @BrookeKushwaha.