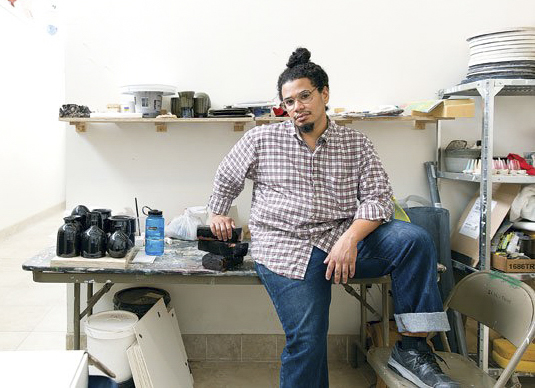 St. Louis-based multimedia artist Kahlil Robert Irving is curating the second exhibition at the University’s Ezra and Cecile Zilkha Gallery beginning Friday, Oct. 26. The exhibition features two parts: “This Country,” and a series of video screenings, “Mapping Energies,” both of which will be on display through Nov. 18.

Functioning in relation to Irving’s recently installed exhibition “Street Matter: – Decay & Forever/Golden Age,” “This Country” uses the American flag as its motif, challenging and engaging with conceptions of race in the United States. Irving spoke to The Argus about this theme, as well as his experiences organizing the exhibition.

“In some way, I can put their work together and have a conversation between theirs and mine,” Irving said. “In my installation next door I have four flags. So I thought it could be interesting to continue or expand on that idea with people who I’ve seen reference the flag, too.”

The exhibition includes works by artists Modou Dieng, Addoley Dzegede, André Filipek, Ari Fish, Rashawn Griffin, Andy Li, Patrick Martinez, Catalina Ouyang, Edward Salas, Aram Han Sifuentes, and Edra Soto, each of whom Kahlil has personally asked to contribute to the exhibit. He is cautious, however, about the word “curator,” and the responsibilities that follow.

“I’d say I’m just organizing,” Irving clarifies. “There’s research, there’s time, there’s attention, there’s phone calls, there’s a whole bunch of stuff that goes along with curating, and I don’t want the title, because I’m not taking the other responsibility that comes along with it.”

But Irving has plenty of responsibility, as quickly evidenced in the slow and uncertain process of assembly.

A flag goes up 14 inches from the top of the wall. No. Two inches higher. No. A little lower. No. It’s uneven. His work is both particular and uncaring. It seems as though he knows the real work has already been done; the rest is just detail. The deceptively easy display of casualness, though, is well-practiced. This is Irving’s fourth exhibit as organizer, and he feels less pressure than he used to. Now, this kind of work is exciting.

“It’s different people’s works that reference autobiographical, larger systemic issues, fantasy or personal narrative, creating a new space for themselves beyond exactly what we know is a certain way,” Irving said. “Their investigation, and the way that they’re building their work, is something that I’m drawn to, that I feel akin to.”

He talks about each of the artists and their work with pride, like in some way they are each his own creation. He points to one large flag sprawled on the table, its triangular shape constructed out of pool table felt with the word “Griffin” printed in large letters through its center.

“This work is about a fictional place in Kansas, but this is the artist’s last name.” Irving explains. “It’s called ‘Griffin, Half’. Rashawn Griffin [the artist] works a lot with pool felt and imaginative landscapes of spaces that he builds, and that you can walk into, and sounds and colors shift.”

In just a few more hours, the white walls will be transformed into something else entirely, something Kahlil himself has envisioned for months. And at that point, the art lives independently of his thoughts or intents, instead left for viewers to interpret and reinterpret, perhaps left for them to politicize something that, to Irving, feels personal.

“We’re all living life and we’re all coming to this with something,” Irving said. “And if you live life and you see things in the world and you come in here, you should see things connected to the world out there going on in here. So it’s really not separate. But we’re trained to think that they’re separate.”

Viewers’ thoughts about the exhibit almost don’t matter, as they are inhabiting a space that Irving has created, the ultimate degree of an artist’s control in many ways.

“You can be in a space, and it’s one thing to present things, intimate things in the space, or autonomous things in a space,” he said. “But when you can actually engage and take over space, that’s a different kind of authority.”