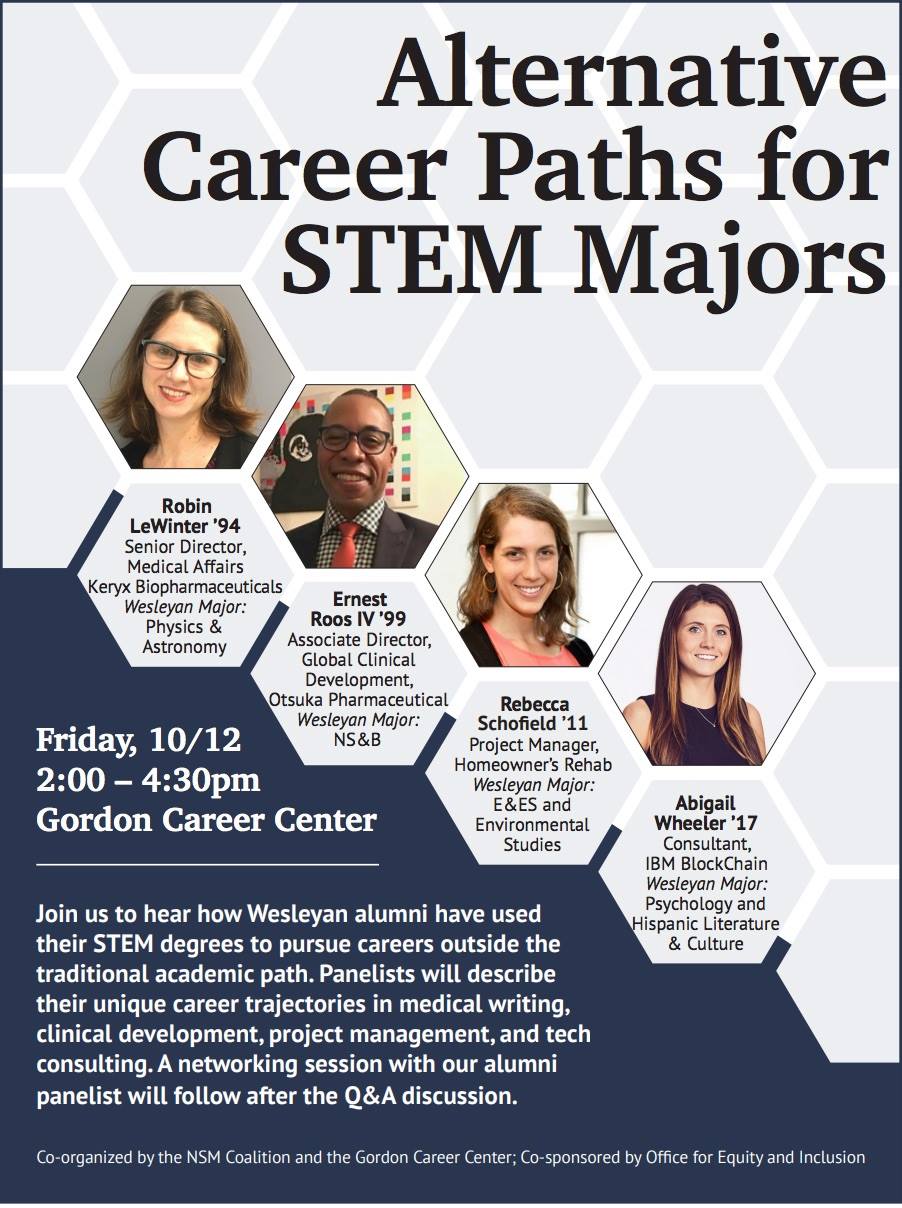 During the Alternative Career Paths for STEM Majors panel on Friday, four alumni talked with around 30 students about their non-traditional career paths and networked with attendees in a casual reception. The NSM Coalition and the Gordon Career Center (GCC) co-organized the event, and the Office of Equity and Inclusion co-sponsored the event.

NSM Coalition member Melisa Olgun ’20 and GCC STEM Career Advisor Dr. Jacob Gonzalez selected Dr. Robin LeWinter ’94, a physics and astronomy major, Dr. Ernest Roos IV ’99, a neuroscience & behavior major, Becca Schofield ’11, an earth & environmental science major, and Abby Wheeler ’17, a psychology and Hispanic literature and culture major, to speak at the event. These four did not go to graduate school in their undergraduate major fields and did not follow a traditional path to medical school.

After hearing demand from NSM students for representation of a wider array of STEM careers beyond becoming a doctor or a professor, the NSM Coalition, a student group that aims to increase diversity and inclusion of underrepresented students in STEM fields, decided to reach out to alumni who used their Wesleyan STEM majors in unconventional ways after graduating.

The panelists emphasized that learning on the job was both important to them personally and necessary for them to follow the career paths they did. For Wheeler especially, she learned most of the skills necessary for her position at IBM Blockchain as a business analyst and project manager on the job, and she sees learning as a continuous part of her job.

“One of the most fulfilling things for me is actually being able to learn,” Wheeler said.  “I found that in some of my internships I almost felt like I was parroting a little bit…. And now where I am, I’m constantly challenged, and sometimes it’s hard, but I almost feel like I’m at school again…. When I understand something new…deeply enough to have a conversation about it and speak intelligently about it and form an opinion about it, that to me is probably the most fulfilling thing.”

The panelists also talked about the value of their liberal arts educations in allowing them to pursue their interests outside of a traditional career path. Schofield, who works at Homeowner’s Rehab, Inc., an organization that works to create and maintain affordable housing, spoke to how the skills she learned at the University have supported her in her career.

“I went into the affordable housing field without any formal finance training or any formal construction training or anything,” Schofield said. “I relied pretty exclusively on skills that I learned at Wesleyan and the way it helped me educate myself and connect with people who can teach me and put myself in positions where I would have the opportunity to learn and practice things that would lead me into this job.”

Attendee Lasette Barrow ’20 came to the event curious about how the alumni utilized their science background in their careers and left feeling reassured that there were more options than just graduate school in the field she focuses on now.

“Even if I get my degree in forensic psychology, I’m still not pigeonholed because they’re telling me there are other opportunities,” Barrow said.  “It’s really encouraging for me to have that confidence that I’m learning the right skills, the soft skills, that I can apply to different jobs and careers.”