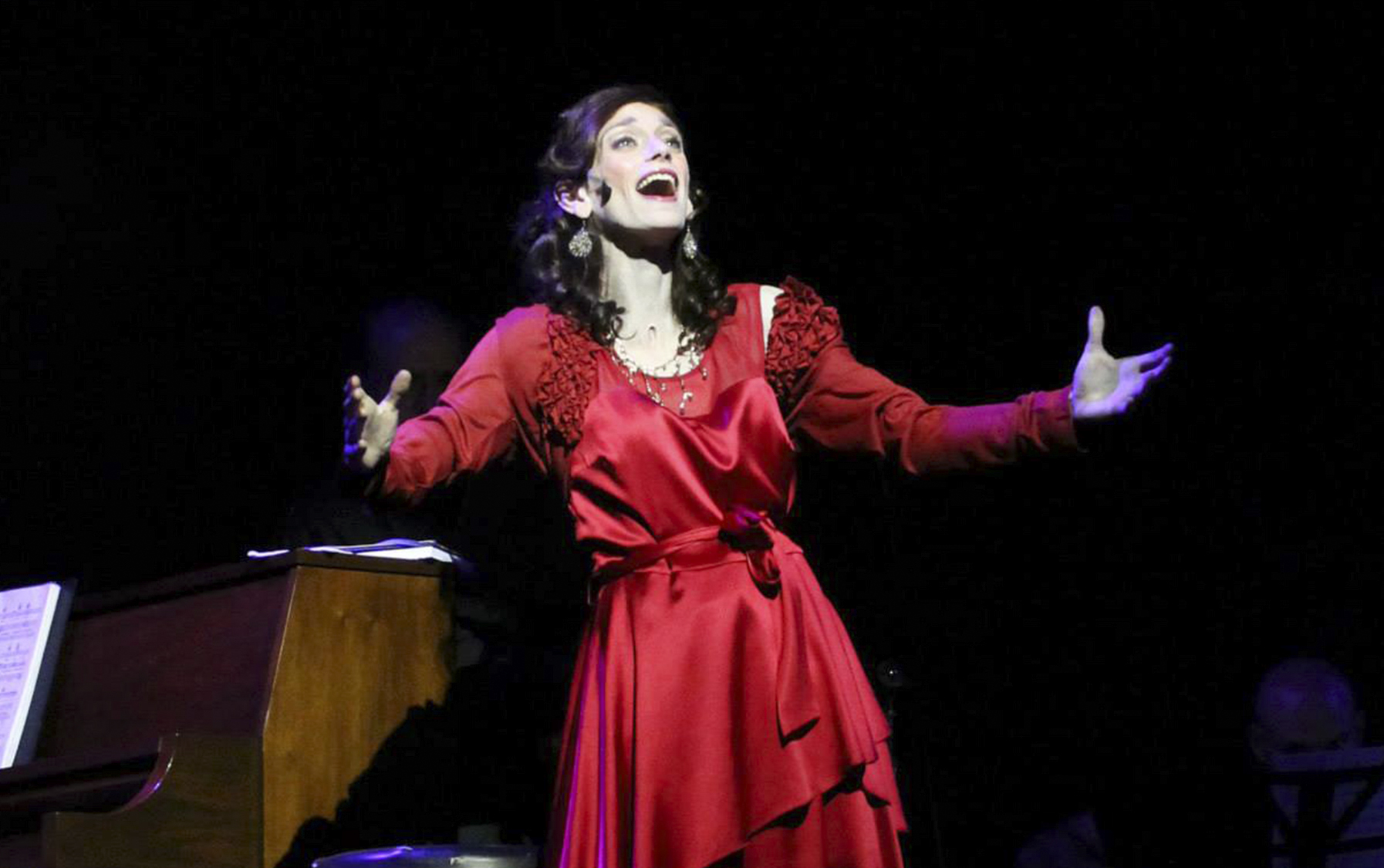 Last Saturday, Adolescent Sexual Health Awareness (ASHA) brought artist and activist Amy Oestreicher to campus to perform her one-woman, autobiographical musical, “Gutless and Grateful: How Losing My Stomach Made Me Hungry For Life.”

The event was a fundraiser for New Horizons Domestic Violence Services, a domestic violence shelter and advocacy organization based in Middletown.

In her musical, Oestreicher, a self-proclaimed jill of all trades, told the story of the ordeal she experienced after a blood clot she developed during her senior year of high school caused her stomach to explode and her lungs to collapse. After spending several months in a coma, Oestreicher could not eat or drink for six years and has now undergone 27 surgeries to repair her digestive system. The show was also centered around Oestreicher’s dream of performing on Broadway, which she had to put on hold as she recovered from her near-death experience, and touched on Oestreicher’s experiences with sexual abuse when she was a child. Through her story, Oestreicher shared with the audience lessons she has learned from years of trauma and the resilience she has gained.

ASHA Coordinator Rebecca Goldfarb Terry ’19 interned at New Horizons last spring and over the summer, and worked with Oestreicher to bring her show to Wesleyan. Goldfarb Terry reached out to Oestreicher after her supervisor at New Horizons approached her about the idea of hosting a fundraiser for the organization. Oestreicher offered to bring her show to campus for free, and she and Goldfarb Terry corresponded about the details of the show including choosing a venue, publicizing the event, and structuring a meaningful talkback portion to occur after the show. Since October is Intimate Partner Violence Awareness Month, Oestreicher and Goldfarb Terry thought it would be best to focus the discussion on sexual violence, PTSD, and healing.

After the show, Goldfarb Terry told The Argus that people came up to her saying that Oestreicher’s story had struck them and made them think differently about the struggles in their own lives. Goldfarb Terry herself was struck by the resilience Oestreicher showed and her ability to turn her trauma into a collection of lessons and insights she can share with the world.

“I think there’s something really beautiful about being able to take your struggles and turning them into something that can be shared with others and help other people get through their own trauma,” Goldfarb Terry said. “I think what she speaks about in terms of healing, being resilient, and accepting what’s happened to you and being able to process that and share it with other people can be applicable to survivors of all different types of trauma.”

Goldfarb Terry also spoke about the importance of listening to these stories that people share in learning how to empathize and advocate for survivors of sexual violence.

“I think it’s really important to hear other people tell their stories because it gives you a chance to develop empathy, which I think is something that’s really important to issues of sexual assault prevention because obviously if you want to be a good ally, you have to be able to listen to survivors and be empathetic to their situation and hopefully act in their best interest,” she said.

The performance last weekend was especially timely due to the recent swearing in of Brett Kavanaugh to the Supreme Court, and Goldfarb Terry said that sharing her story at Wesleyan was particularly meaningful to Oestreicher.

“She said it meant a lot for her to be able to do this particular performance at this time because of everything that’s happening on the national stage with Brett Kavanaugh and Dr. Ford, and all these conversations we’re having as a nation about trauma and coming forward and sexual assault,” said Goldfarb Terry. “She said that for her, this performance meant a lot because it was a chance to share a story of hers that resonates with contemporary issues.”

After the performance, Oestreicher and Community Educator at New Horizons Erin George facilitated a conversation with the audience about the performance and Oestreicher’s story. George spoke about how her master’s thesis is related to the themes Oestreicher discusses in “Gutless and Grateful.”

“My master’s thesis is called ‘Resisting Tropes and Asserting Selves’, but really it’s about trauma and testimony…and about the healing components of testifying for yourself and testifying for your own lived experience,” George said. “I think Amy did a beautiful job tonight of testifying on behalf of herself, testifying her own experience and really exploring the more therapeutic aspects of what theater has to offer.”

Oestreicher then played a video about her #LoveMyDetour initiative, which she spoke about in a Ted Talk at Syracuse University in 2016. She defines a detour as any event that changes the course of one’s life and makes one think differently about themselves and their relationships with others.

“What’s a detour?” Oestreicher asks in the video. “A detour is a curve in the road, a bump in the path, a big sign in the middle of our trip that says ‘Sorry, you have to go that way’…An unexpected blood clot my senior year; that was my detour. The road that followed, even with the 27 surgeries thrown in, became my beautiful detour. Without those twists and turns, setbacks and obstacles, I never would’ve learned so much about life, the people in my life, and what I’m capable of. If you can appreciate the little twists in your path, that makes you a detourist.”

An audience member then asked how Oestreicher stayed optimistic during her recovery and what advice she might offer to people who are despairing in their detour.

“I think I realized that you don’t always have to love your detour, but you do have to trust it,” Oestreicher responded. “It wasn’t until many years later that I was able to say, ‘Oh, if I’d never done this, I’d never have met this person or this person.’ In the moment, there were times when I wanted to give up. So I let myself have those feelings…because just to say ‘I’ll keep a positive mindset all the time’, you just can’t do that. You’re supposed to feel all those ugly feelings like pain and frustration.”

Miriam Bernard ’19 then asked how Oestreicher advocated for herself in the medical system as she underwent nearly 30 surgeries.

“It was hard, especially trying to get doctors to give us hope,” Oestreicher said. “They would say right in front of me, ‘She can’t eat, and she can’t drink’, and that was hard. And advocating for yourself, you know, they’ll just give you routine tests, and you always have to be your own advocate because mistakes can always happen on anyone’s part. I think a good thing is that art therapy and creative therapy are starting to become more mainstream in hospitals because they do give patients some sense of control.”

Oestreicher spoke about a musical that she is currently developing about her most recent, 27th surgery, and displayed some of the art she has made during her recovery. She spoke about finding painting as an outlet for all the emotions she was feeling in the aftermath of her traumatic medical event.

“[Discovering] a paint brush for the first time was such a blessing for me because I didn’t have words yet, but I could make shapes and colors,” she said. “And that was the start of when I could verbalize things…I could paint blues of sadness and reds of anger, and lighting bolts. And I didn’t know what I was expressing, but I was just getting it out…it took me 10 years to even find the words.”

All the proceeds from ticket sales went to New Horizons, which is the only domestic violence services provider in Middlesex County. The organization offers a 60-day shelter for survivors of domestic violence and assigns survivors an advocate who counsels them and assists them in starting their lives again after leaving an abusive relationship. New Horizons also offers in-court advocates, who help survivors get restraining and protective orders, and health services through the Community Health Center on Main Street.