Utopia or Dystopia? Pain, Drugs, and Delusion in “Maniac” 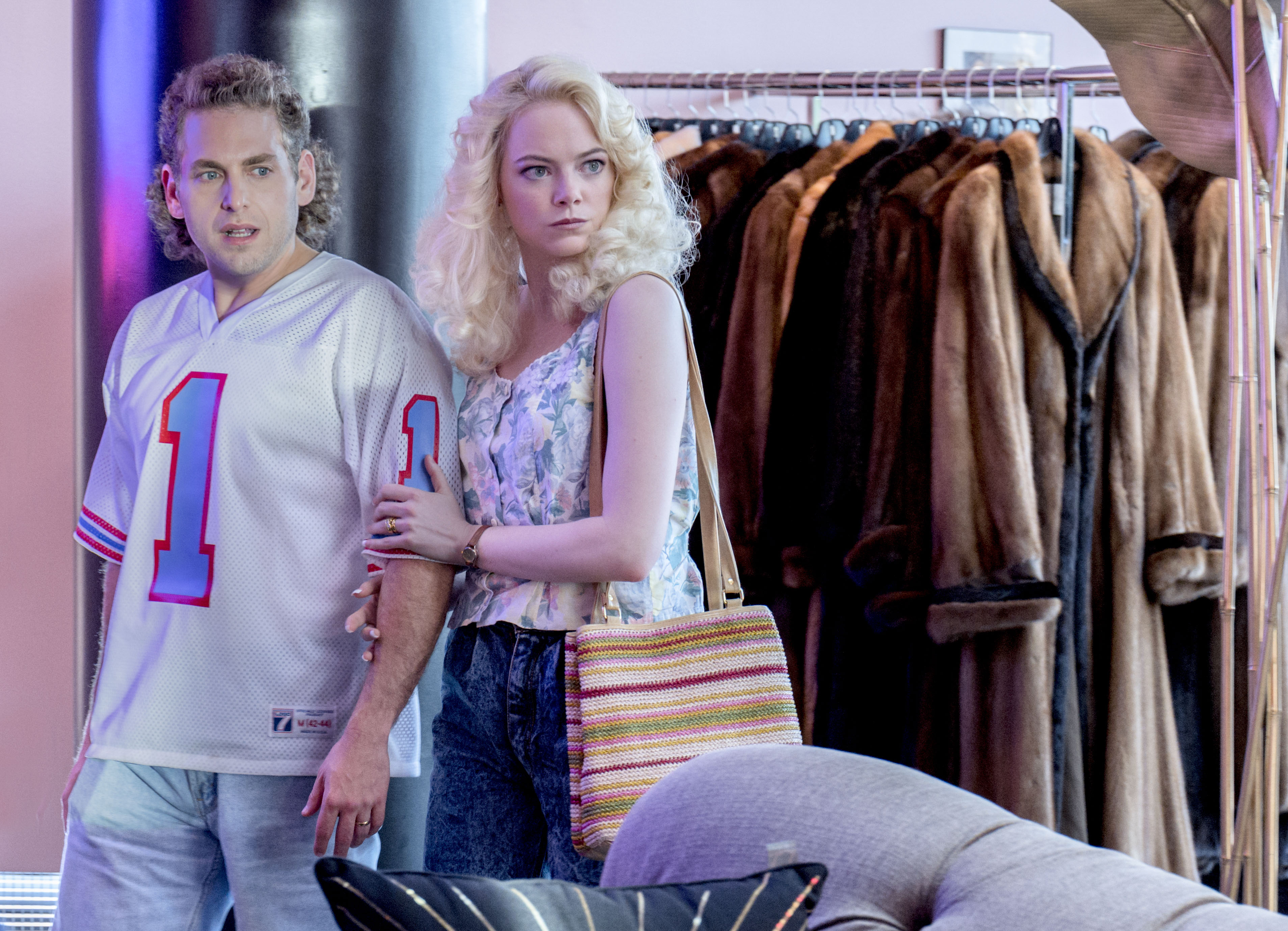 Retrofuturism, advertising, drugs, and mental illness come together in “Maniac,” Netflix’s latest 10-episode series. The brainchild of director Cary Fukunaga and writer Patrick Somerville, the dark, psychological, comedic drama slowly unveils a twisted parallel universe in which popcorn kernels fall from the sky and small robot gadgets listen to our conversations while picking up our trash. Emma Stone and Jonah Hill star as Annie and Owen, two troubled individuals brought together by a pharmaceutical trial designed to solve the mind and to cure humanity forever. The catch? The artificial intelligence computer running the trial is herself mentally ill, with a depressed motherboard unremittingly sobbing over her own control panels.

Set in an ambiguous time period that appears to be 20 or 30 years from now, the series recreates an alternative New York City that feels just slightly off. David Foster Wallace’s legacy is echoed quite clearly, as advertising has slowly creeped further into life as we know it. The city’s famous skyline is marred by neon advertisement displays and people can hire a so-called Ad-Buddy that pays for all of their expenses, in exchange for trailing them around and spewing a stream of advertisements. We even find out that Annie has sold her image to advertisers in the second episode, which is why Owen sees her face practically everywhere he looks.

But this reality, while disturbing, is not that far off from our own. Aside from these notable nuances, the New York of “Maniac” is still a recognizable one; a Chinatown apartment is occupied by a dozen or so 24-year-old tenants, Washington Square Park chess tables are still the meet-up point for drug purchases, and engagement dinner parties look like those in any Woody Allen film. It is a reality that mirrors the one we live in but with the blinds pulled down and our defense mechanisms laid bare. In this world, people can pay for friends who connect to them based on information found online, a fictional detail which feels somewhat true to real life and in fact already exists in some parts of the world.

Owen and Annie each have their own problems with mental illness. Owen is schizophrenic and dangerously depressed, having previously attempted suicide. He has recurring visions in which his brother (or, at least, a more ideal version of him) communicates with him and lets him know that he is responsible for saving the world. Annie, in this vision, is Owen’s accomplice and is meant to provide him with important signals and codes to know what to do and when.

Owen’s reason for participating in the trial is completely unrelated. He comes from a filthy rich family and just wants to earn some extra cash to assert his independence. Tense family relations play out as members of his family pressure him to provide an alibi for his brother, who has apparently sexually assaulted his coworker. He happens to spot a recruitment ad for the trial in the newspaper, and as its intentions are to “cure” mankind, he sees no reason not to participate. At the trial, he just so happens to run into Annie.

Annie, however, is a totally different story. She has no money and has become addicted to the pill that the pharmaceutical trial is testing. Her addiction is her attempt to overcome the guilt and sorrow she feels over her sister’s death in a car crash. Annie has not been cleared for the trial but sneaks in anyway, threatening a woman who is part of the administrative staff. Owen pesters Annie, letting her know that he is awaiting her signal, and she plays into his fantasy because she doesn’t want to ruin her chances of participating in the study. After they enter the trial, Annie admits to Owen that she is not his accomplice nor has she anything to do with his alleged mission to save the world.

The two proceed into the study and have to take three rounds of pills, relating their experiences to scientists afterwards. As the trial progresses, Annie and Owen’s unconsciouses begin to merge, and they are soon transported into alternate realities with alternate identities. In one trip, they are an ’80s couple attempting to rescue a lemur from a mob. In another, they play two con artists in the ’40s attempting to find the missing 53rd chapter of “Don Quixote.”

There are frequent references to society’s delusions and attempts to construct a perfect world. It is impossible to miss the recurrence of “Don Quixote” as both a prop and a central plot feature. The only book that Annie decides to bring to the trial is the Cervantes epic, and it is pretty clear as to why. The protagonists of the novel rewrite and retell their own grand narratives of adventures that may not be so grand after all. Kesey’s “One Flew Over the Cuckoo’s Nest” is hinted at as well, perhaps to remind us of lobotomizing procedures to “correct” those who err in society or who suffer from mental illness.

The screenplay of “Maniac” can often be rather unoriginal, with references such as these meant to appeal to those in the drug-related, liberal, and intellectual know. We are left to ponder over questions raised again by David Foster Wallace years prior: can we “solve” the intricacies of the mind to overcome discomfort, depression, and anxiety? And do these solutions genuinely address our problems or do they simply lure us into the open arms of advertising, entertainment, and drugs?

The series’ originality, however, lies in its failure to answer these questions. While the show is in many ways generic, Fukunaga and Somerville are all too aware of this fact. Their approach is entirely experimental, with their only intent being to highlight an existing, suppressed reality. Their show places pain and mental illness at the center of a constructed world where they are the only set of rules that characters abide by. Everything else falls into place around this, becoming the new reality. The world is recreated through the suppressed states that society coins as delusion or anomaly. In this universe, happiness is delusion while depression is fact.

Drugs are not presented as an ameliorative or panacea to illness, dragging down the victim into the narrow path of addiction. Drugs are simple; they serve as nothing more than a medium for grasping truth and embracing it comfortably, in a controlled experimental environment. Participants who take the drug are forced to relive their most traumatizing experiences, thrust face-forward into confronting their greatest demons, embarrassments, regrets, and fears. Only when grief is accepted as constant can it be viewed as a normal, non-stigmatized reality.

The show is a dreamy mix of “Inception,” “2001: A Space Odyssey,” and “Limitless.” It is beautifully shot and is incredibly visually appealing; even a world plagued by sadness can be full of color. If the screenplay doesn’t make the grade, then the aesthetics certainly do. All the while, Stone and Hill’s acting is, of course, exceptional. They navigate the ridiculous dialogue and fully sell the reality in which they are entrenched. While some of their characters’ more melodramatic lines may be hard for viewers to take seriously, the point is that they don’t need to be. Their roles are just one piece of a larger picture meant to invert a common understanding of reality with dark humor. The joke is on us.