Who to Listen to on Any Given Sunday, CBS Edition 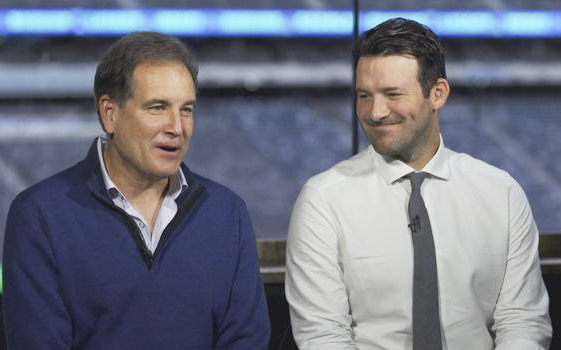 Much to my dismay, we have approached the end of my NFL commentator rankings. Over the past two weeks, for those who aren’t avid Wesleyan Argus sports opinion readers, I’ve been ranking my favorite NFL commentators. Although my decisions haven’t provoked outrage or the discourse that I hoped would occur across the world (sarcasm), I’m happy to finally write about my favorite pair: CBS’s Jim Nantz and Tony Romo. The criteria that I judge each pair on is subjective, I admit. Some love the robotic Joe Buck, while others prefer the smoothness of Al Michaels. I didn’t make these rankings to simply state whom I like to listen to the most. Rather, I attempted to create discussion that forces individuals who sit on the fence about their favorite broadcasting pair to finally pick a side. As I close out my rankings, I want all the readers to listen to each pair on Sunday and feel lucky that we all have Joe Buck in our lives. We could do a lot worse, trust me. But here’s Tony Romo and Jim Nantz.

Similar to Al Michaels, Jim Nantz has a softness about him. It’s not soft like he’s not a tough guy, but my ears yearn to hear the sound of his voice. He begins, as he always does, with, “Hello friends, I’m Jim Nantz.” Personally whenever someone says “hello friend” to me, he or she is normally not my friend. I wouldn’t say that I’m repulsed when someone addresses me as “friend,” but none of my actual friends refer to each other as “friend.” Even though it’s a quirky introduction, I love it. When Nantz says “friends,” his silky smooth voice brings a smile to my face. I know it’s game day when I hear that phrase.

Before I go any further, I want to address the elephant in the room: CBS’s near-monolopy on broadcasting AFC games means that Nantz and Romo are normally covering the Patriots. As an avid member of Patriot Nation, I can firmly say that my connection with Nantz and Romo has nothing to do with the Patriots. With that behind us, Nantz “does his job” as University alumnus and Brother of Chi Psi Bill Belichick ’75 would say. Nantz does a great job of deferring to Romo about play calls, personnel groupings, or any football detail that the common fan doesn’t know. By doing less, Nantz does more by just calling the game.

I don’t really hear a difference between Nantz’s football and Masters commentating. That’s the mark of a great commentator: the ability to transition from a gladiatorial sport to a quiet one without skipping a beat. I pick Nantz over Buck based on the evidence I just gave. Nantz and Michaels is a toss up for me because both do such a great job at letting the game come to them and just calling the game as they see it. So what’s the difference between my pick of CBS over NBC? You guessed it. Tony Romo.

How will Tony Romo be remembered? He had quite a journey from an undrafted rookie from Eastern Illinois University to the quarterback of America’s Team to headline CBS broadcaster. What would’ve happened if the referees ruled Dez Bryant’s “drop” as a catch in that divisional game against the Packers in 2014? Tony Romo could’ve been in the Super Bowl with the way the Cowboys were playing that year.

Instead, football-era Romo will be remembered for that bad hold on the game-winning field goal against the Seahawks and choking in front of his girlfriend at the time, Jessica Simpson, on the world stage. Good thing Romo landed in the booth at CBS. Romo, like any good NFL quarterback, can read defenses and understand offensive play calls. He brought that skill to the booth by telling the audience the play before it’s actually run. Some people say they want to be surprised by the play and don’t want Romo’s play call. I couldn’t disagree more. He doesn’t simply say it’s a pass play. He says, “the guard’s going to pull; the defense is in man coverage; the receiver is running an option route.”

Simply put, Romo has revolutionized the commentating game by bringing his vast knowledge of the sport to the audience. He makes football fans smarter and more equipped to understand the game in a more sophisticated way. He also brings humor into the booth. If you notice on challenges and official reviews, when a replay comes on, Romo’s voice will get really high and squeaky voice of a receiver trying to drag his feet to remain in bounds. He says, “I dooon’t knoooow, it’s goinggg to beee a cloooooose one Jiiiiiiiiiim.” Some may find it annoying, but I don’t. He brings an enthusiasm to the game that Troy Aikman certainly lacks, and Cris Collinsworth can’t match. Romo’s combination of great football knowledge and enthusiasm is a pleasure to listen to. I’m sure NBC and Fox will look to replicate Romo and Nantz with their next leading pair.

It’s been fun doing analysis on these guys. Most of my analysis builds from endless messages in group chats with my high school buddies on Sundays. Even though they now live across the country in Davidson, N.C., Charlottesville, Va., and Ann Arbor, Mich., watching sports and cracking jokes at the expense of these commentators keeps us close as we make our way through the college experience.

Andrew Martin can reached at akmartin@wesleyan.edu.