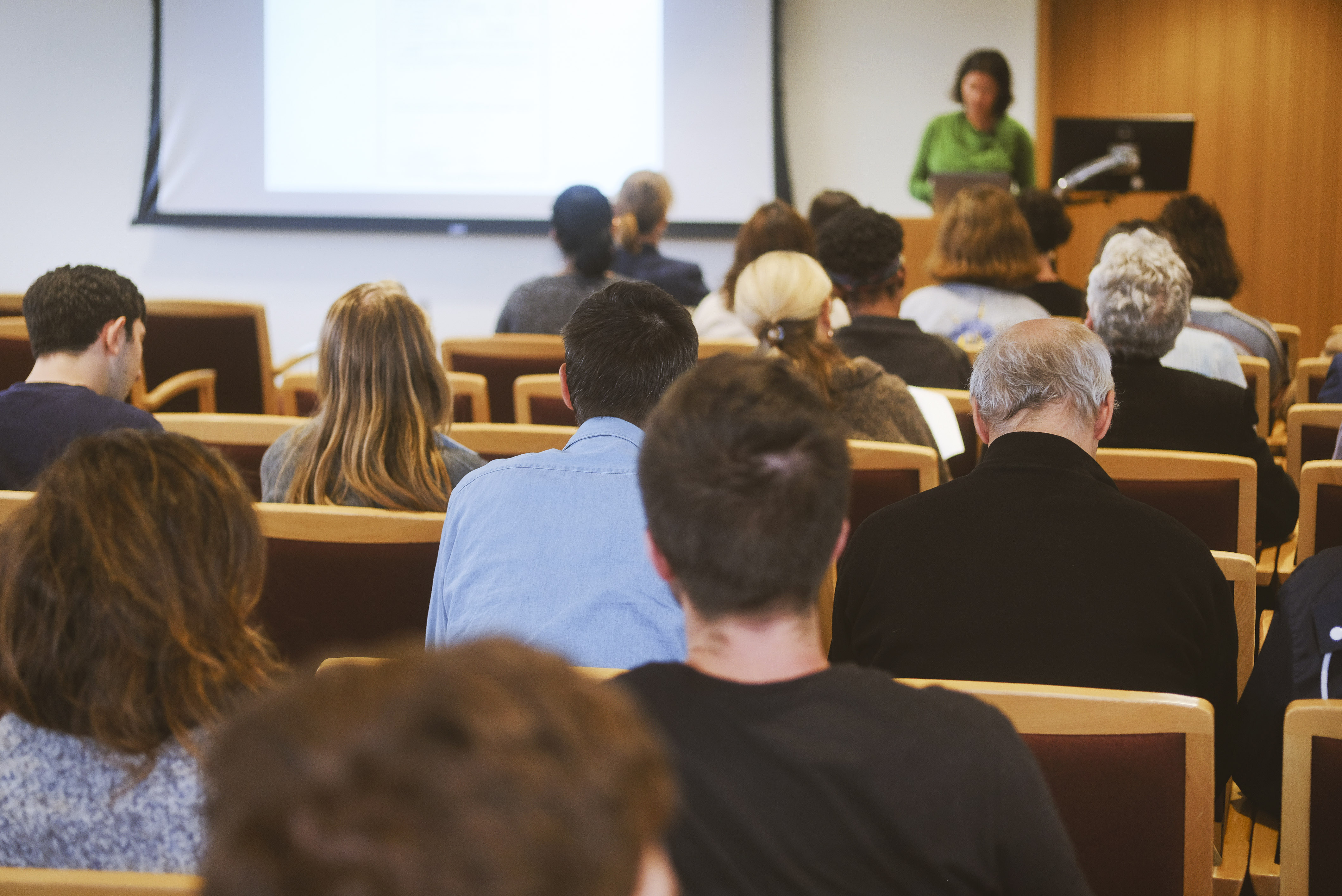 Alexandra Hui of Mississippi State University visited campus on Monday, Sept. 24 to discuss her research on the history of different listening practices and how they relate to scientific understanding of auditory perception and varied sonic environments.

She joined a collection of students, alumni, and professors in Daniel Family Commons as the first speaker in the annual Center for the Humanities (CHUM) Monday Night Lecture Series.

Each year, CHUM focuses on a certain theme and selects speakers whose research can elucidate a specific aspect of that theme. According to the Center for the Humanities website, this year’s theme is “Corporeal Techniques and Technologies.”

“This semester, we trace the past, present, and potential futures of our biotechnological age, and the new forms of post-human technicity prompting us to rethink the shifting boundaries of human and non-human embodiment, what counts as a ‘body,’ how bodies make, move, act, feel, perceive, communicate, record, etc., as well as new forms of bodily inscription, modification, prosthesis, distribution and extension,” the website reads.

Hui, an Associate Professor of History whose research focuses on the history of science, technology, and sound studies, discussed her current project, Sonifying Space. In the talk, she explained the incorporation of sound into both the private and public spheres and talked about what enabled these developments. Eventually, the innovation of different technologies could lead to a manipulation of the sound implemented in public spaces.

In an interactive part of the presentation, she played the “William Tell Overture” by Gioachino Rossini on the loudspeakers. The audience then filled out a “Mood Change Chart” to assess how they felt before and after listening to the piece. After this, Hui explained the significance of the test.

“So you’re thinking of ways in which music might affect your mood,” Hui said. “You also did a little bit of form listening. Form listening, as a corporeal technique, renders listening itself as an investigative object. And not just for the individual listener, thinking about it as a thing that could be studied, but certainly also for the people that created these kinds of charts and analyzed the data.”

According to Hui, listening became commodified through the use of these forms and indexes in a way that changed the role of music in the public sphere. Columbia Records got into the business of Muzak, the generalized term for almost all background music. Additionally, employers began utilizing music in the workplace.

“Music now doesn’t define a break from work, it is actually a part of work,” Hui said.

Hui also mentioned that the use of music in the workplace could serve as a potentially manipulative tactic of employers, putting employees under further surveillance in the workplace. In its most exaggerated form, this could resemble a quasi-dystopian environment that operates under an Orwellian system of “watch and control.”

“[Form listening] made applications of this functionality possible, so you could then apply it to another group in an effort to optimize their performance and maybe their individual identity through the construction of a very specific sonic environment,” Hui said. “It was certainly a critical part of the cycle of cynicism… But we can think of how [these innovations] made new sounds, new silences, and new sonic environments possible.”

For those in attendance, the talk was illuminating and connected ideas from different fields of study.

“I think one of the important things about the Humanities Center is that it brings together these people with a lot of different research interests from a lot of different disciplines and it creates a very comfortable space where these ideas can be exchanged,” Frank said.

CHUM, which invites a variety of speakers with different areas of expertise, cultivates open dialogue between disciplines. Professor Frank connected this to his own work.

“For me, in my research, I think about how schools and higher education trains and socializes human experience,” he said. “So what I found interesting about this talk, and potentially other talks over the course of this semester, is that they are exploring different institutional regimes and different programs for disciplining.”

These CHUM talks will continue every Monday night at 6 p.m. in Daniel Family Commons with the next speaker covering the topic of climate change.

Natasha Korda, the Director of CHUM who introduced Hui on Monday, spoke about the relevance of Hui’s research and this year’s theme.