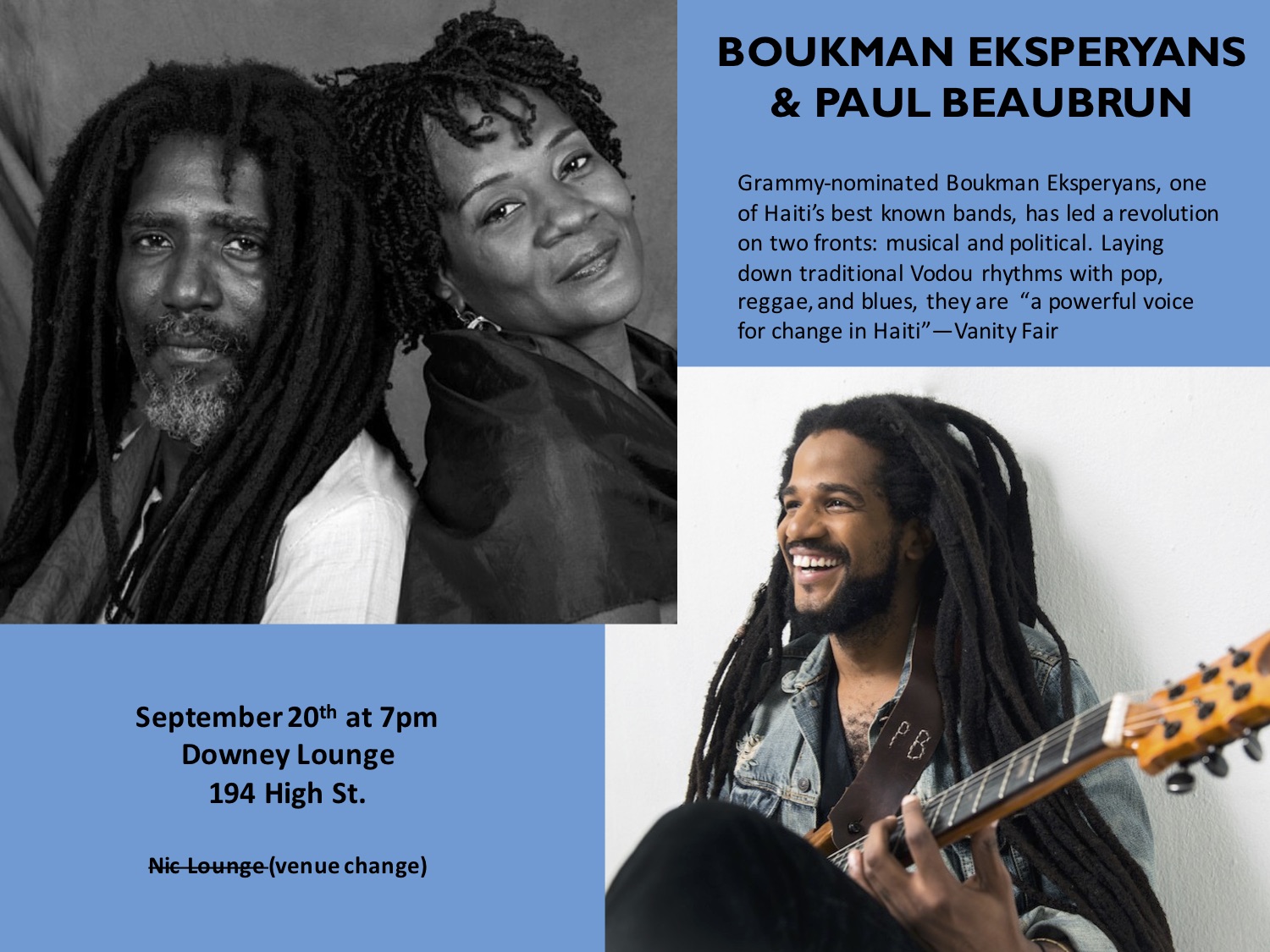 Lolo Beaubrun walks into Downey Lounge slowly and with purpose. His eyes take in the scene, his long dreadlocks trailing behind him like a dedicated fan. He doesn’t just do anything, but instead feels everything. He moves a few microphones, engages with the students in charge of sound, and shakes my hand firmly, ready to be interviewed. He’s both there and not there, his mouth completely engaged but his mind elsewhere.

On Thursday, Sept. 20, the Downey Lounge was transformed. Into what, exactly, is harder to describe. To call it a concert hall seems shabby, and a “church” seems too formal. But somewhere at the intersection of these two spaces, members of the Grammy-nominated Haitian band Boukman Eksperyans delivered a performance that could be the antidote to increasing alienation in a world dominated by ideology.

That may sound overstated. That may sound like some Marxist pipe dream, but when lead singer Lolo Beaubrun speaks, for a moment it feels like truth.

Boukman Eksperyans is known for their distinctive style that fuses the traditional rhythms of Afro-Haitian religion, known as Vodou, with rock and reggae. But when Lolo talks about music, he rarely discusses the practical means of instrumentation. It’s as if his brain automatically translates questions about music into questions about society. For him, they are one and the same.

“You create it when you are with yourself, when you go into yourself, deep into yourself,” he said. “For me, it’s important that we go beyond ideology in music. Man always takes concepts and thinks that concept is the infinite concept. That’s why we’ve been in capitalism, communism, Christianism. They’re all isms.”

It’s at that time that I knew my previous judgement was wrong: I am the one who is both there and not there. Lolo has transcended the humdrum of this global, capitalist life. He is, in some ways, what Marx would call unalienated.

Lolo’s wife Mimerose Beaubrun is in the band, and their son Paul joined them for the performance, making the event a real family affair. At one point, Mimerose attempted to explain the meaning behind one of their songs. She asked her son to translate, but interjected to correct his rough translation between each sentence.

“Is that good mom?” Paul asked jokingly in response.

It’s another reminder that they’re having genuine fun. Music is not work, but instead what Lolo called magic. The real energy of the performance doesn’t rest in the perfect harmonies, or Paul’s rock guitar playing, or intense drum solos: It’s far bigger than that. Lolo calls his music a spiritual revolution.

“We have to know what we really are, what everyone really is,” Lolo explained. “We’ve been trapped by ideas because when we were raised they show us lying, how lying can hide you, the power of pride to protect yourself, all those things. You think it’s you.”

Boukman Eksperyans’ music feels like a return to consciousness. The band walked in humming in perfect harmonies. It’s not only one sound being processed when they sing; it’s multiple energies, multiple vibrations, complexity disguised as simplicity. When Lolo dances during the set it’s as if he’s lost in a spiritual rapture; the whole room becomes elevated in his transcendence. The band takes inspiration from legends like Bob Marley and Jimi Hendrix. Like Hendrix, Boukman Eksperyans can’t quite be fit in a box; they’re doing something uniquely theirs.

At one point in the set, Paul began clapping, a request for audience participation. The room began clapping, adding another layer to the band’s percussive sound. It’s in that moment that Lolo’s mention of Vodou seems most tangible.

“The meaning of Vodou is not like the Hollywood sense,” he said. “It’s spirit, energy. That’s why in Haiti we see the energy before we see the matter. Even when we look at a tree, we don’t see only the exterior of the tree. We see the tree as an entity, a living being. It can help you, communicate with you. If we go by concept, by the exterior, I’m gonna see the tree as money.”

And this is where Lolo’s spiritual revolution is inherently entwined in a political revolution. It’s a reliance on certain external systems that have led to this internal, spiritual disconnect.

“You see only money, only something superficial. You don’t get contact,” he warned. “This is why I tell you we’re in danger if we go that way. We’re in danger of ourselves. At a certain time, we’ll become so outside of ourselves. This is the time that all those crazy things [isms], all the extremes, we can grab people and make war.”

In wake of the destructive 2010 earthquake in Haiti, total political revolution is difficult, if not impossible. But Lolo sees the steps Haiti is currently taking toward decentralization as the first steps toward significant political change.

“The politicians have a problem when we talk of decentralization, because what is important for them is to get money, to do money,” he said.

A few times in the conversation Lolo mutters with conviction that “there’s something going on.” He feels the revolution picking up speed, and he’s not just along for the ride. His music has been preparing him for it his whole life.