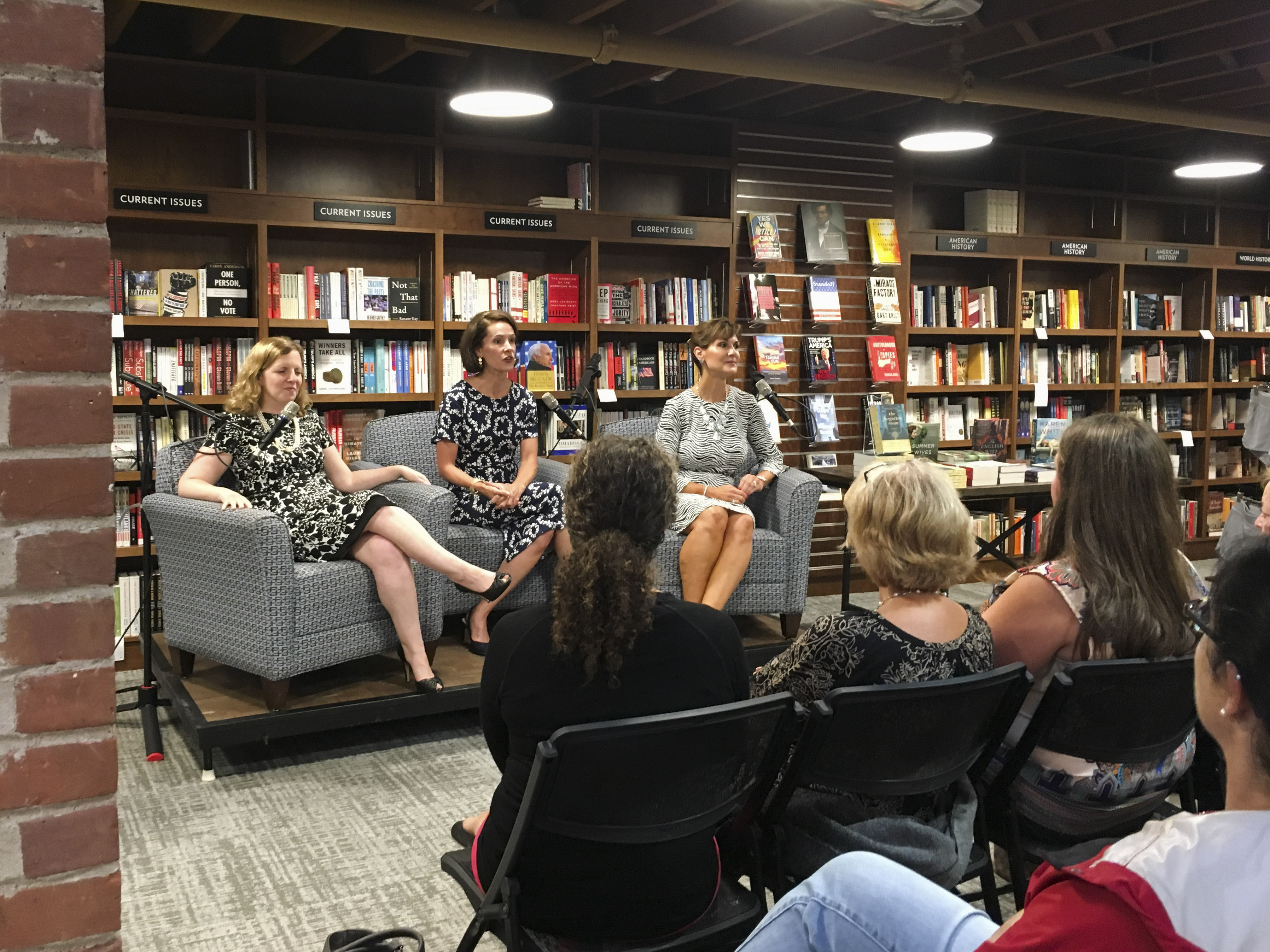 On Wednesday, Sept. 12, Beatriz Williams, Lauren Willig and Karen White visited Wesleyan’s RJ Julia Bookstore to give a talk about their new novel, “The Glass Ocean.”

Middletown was the 13th stop on their two-week book tour, which began in Georgia and will end in Rhode Island. Released on Sept. 4, the book is the second novel that the women have co-authored together and luckily, they told the audience, not the last.

Though each member of the creative trio (‘Team W,’ as they’ve dubbed themselves) is a successful writer in her own right—they’re all New York Times bestselling authors—the women spoke at length about how working together has enabled them to grow as writers and as friends.

They began the talk by addressing the most obvious question: How did they start writing together?

“The answer is actually very simple,” Beatriz said and looked at Karen.

“Three writers walked into a bar,” White said and winked at the audience.

“And not just once, but several times!” Willig added. “That’s kind of what we do.”

The presentation was truly given by all three women, each one finishing the others’ sentences with the fluid banter of an old married couple telling their “how-we-met” story. The women had all known each other through the writers circuit, Williams explained, but it wasn’t until Williams and White realized that they were both mutually stalking Lauren Willig that the trio came to be.

“Our plan was just to keep stalking as aggressively as possible and basically if we stalked long and hard enough she would eventually realize—as you usually do—that we were meant to be friends,” Williams said.

“They just dangled a martini glass in front of me and said ‘Here girl, here girl!’” Willig recalled.

A few years after they had met, the women sat down together at a writer’s conference to have a drink. They had each recently returned from their respective book tours and were commiserating about the lonely life of an author on the road: the hotel robes that are never quite as fluffy as you want them to be, the endless reruns of random TV shows you never actually want to watch, the pitiful looks on the faces of room service attendants who ask, “Is this all for you?” But this time, in this hotel, they were together, enjoying one another’s company, sharing a bottle of wine, and talking about the future.

“We said ‘Wow, wouldn’t it be fun if we could do this always, if they would tour us together!’” Willig recalled. “And then one of us, I don’t even remember which, had the brilliant idea: ‘Well maybe they will tour us together, all we have to do is write a book together!’”

“Mostly we got excited because we were thinking, ‘Oh my gosh, we could get a publisher to pay for our girls trip!’” White said.

Though the story they came up with that night—an anthology set in Scotland entitled “Fifty Shades of Plaid”—never quite came to fruition, the idea of writing a book together stuck with each of them.

While the three women have very different styles and voices and tend to write about different eras and geographical regions, they have one important thing in common: they like to write in dual, or even multiple, narratives. Switching between place and time period while maintaining a cohesive arc, a dialogue between past and present, creates the mystery and intrigue that these authors love. And such a structure, they hoped, might enable them to actually write together.

“The feeling of writing a book together remained very appealing,” White said. “We believed in taking that little leap of faith, in stepping outside of our boxes, in stretching ourselves and testing our abilities.”

It was a cold March morning when the women got together in an Alice’s Teacup in New York to plot their first novel, which, they had decided, would take place in a posh Manhattan mansion on East 69th St., and would be set in three different time periods; the 1890s, the 1920s, and the 1940s. The book follows the stories of three women from three generations, each of them tied to a single mystery, all wrapped up in one house.

“People always say, ‘How do you write with other people?’ and I think I can speak for all three of us [when I say] I don’t think we could write with anybody else,” White said. “Because what we discovered at Alice’s Teacup as we sat around and started plotting… was just this magic zinging of ideas…”

“In fact we recently developed a term that Karen will scientifically explain to you,” Williams said.

“Yes Karen, what are we?” probed White.

“One brain and three bodies,” White revealed, making a rainbow with her hands, the way one might envision their name in lights.

“The unibrain!” they all said in unison.

After the release of their first book, “The Forgotten Room,” the trio took to the road for their first collective book tour and decided that they definitely wanted to co-write another novel. Soon enough, they had all agreed to write their next book about the RMS Lusitania, an ocean liner that was sunk by a German U-Boat in 1915.

“The Glass Ocean,” their second novel and the reason for The W’s stop in Middletown, once again focuses on three different narratives. One takes place in modern day and follows a young woman, Sarah Blake, who breaks the promise she made to her Alzheimer’s-stricken mother and opens an old chest which had belonged to her great-grandfather, who died on the Lusitania. The contents of the chest lead her to London, where she embarks on a quest to discover the truth behind her family’s history, and in turn, herself.

The other storylines in the book follow two passengers aboard the famed ship, Caroline Telfair Hochstetter and Tessa Fairweather. The former is a Southern Belle, looking to gain some distance from her failing marriage while the latter is a con woman, posing as a poor Irish girl, who is looking to pull off one last heist before she gets out of the game for good.

The authors are excited about the release of the book and have enjoyed getting to tour with one another and experience this stage of the creative process together. They’ve been calling the trip the “Best Book Tour Ever Part II” but are fairly certain that it won’t be their last “Best Book Tour Ever.” The process of brainstorming, outlining, and writing two books together has been an incredible experience, one which has prompted tremendous growth in each of them as writers and thinkers.

“It stretched us and challenged us,” said Willig. “Because we do like, when we do our collaborations, to get out of our comfort zones and write against type.”

Though the authors won’t say much about the status of their next book, they did concede one clue about the novel’s setting.

“Should we say it together?” Williams asked.

The other Ws nodded.