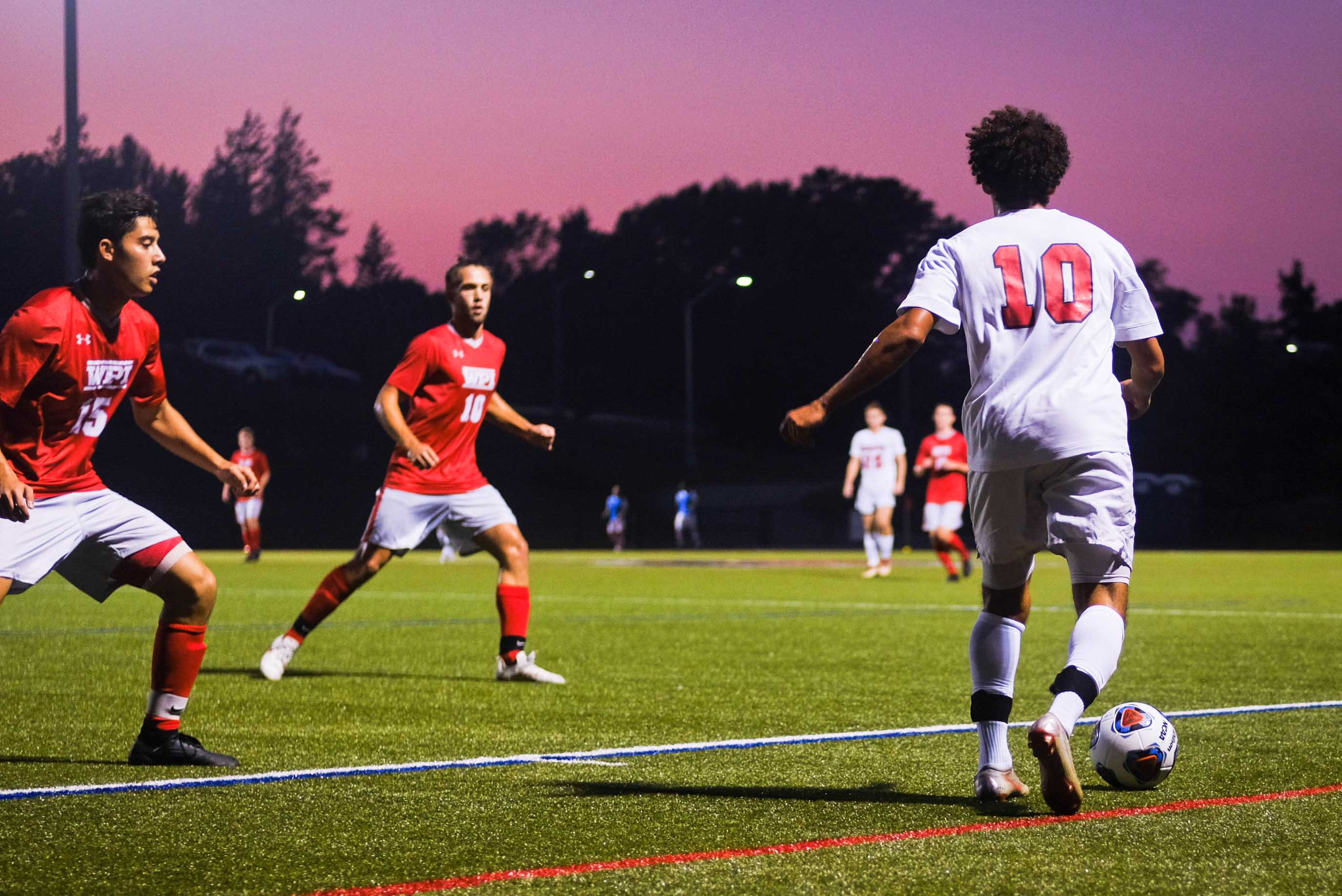 Men’s soccer kicked off its season last Wednesday on a suffocatingly humid night at home versus non-conference opponent Worcester Polytechnic Institute (WPI). From kickoff, the Cardinals dominated the game in possession but struggled to find good looks on net. After the first 15 minutes, play evened out with neither team able to connect passes to their forwards for chances on net. The tie was broken in the minute 32, when a missed Cardinal clearance saw the ball drop to the feet of Engineers’ midfielder Luke Reiniger, who volleyed a shot into the bottom corner of the net to put the Engineers in front 1-0. As the first half came to a close, Reiniger looked to double his team’s lead, but his shot skimmed the crossbar on its way out of bounds. The second half saw a series of half-chances for the Cardinals, but the WPI defense held strong and managed to squash opportunities close to net. The best look for the Red and Black came on a free kick from Komar Martinez-Paiz ’19 that barely missed the right post. At the final whistle, Reiniger’s goal held up, improving the Engineers’ record to 3-0-0. Looking ahead, Wesleyan looks to improve its capitalization on set piece and shot ability, as the Cards held the advantage in corner kicks 9-1 and shots 15-10, but could not turn these chances into goals.

Looking to earn its first win of the season, men’s soccer traveled over 200 miles south to Haverford, Pa., to play in the Jimmy Mills Tournament, named for the titular former Haverford and U.S. Olympic team coach. The Cards’ first opponent was Haverford College, who finished with 10 wins in 2017. The two sides battled back and forth in the first half to a 0-0 deadlock, with the Birds holding a 5-3 shot advantage. However, the second half saw Haverford’s leading goalscorer Nick Jannelli score a little more than six minutes in after the Cardinals failed to capitalize on multiple opportunities in front of goal. It seemed as though the Fords would hold on, but Alec Haas ’20 had other plans, equalizing the match 1-1 in the 80th minute and adding to his career tally of seven goals. Regulation finished in a draw, pushing the game to golden goal overtime. Just 4:06 into the overtime period, Jannelli again burned the Cardinals with his 24th career goal, pushing Haverford to a 2-0 record and keeping Wes winless on the season. A standout performer for the Cardinals was goalkeeper Chris Franklin ’21, who posted a career-high six-save day as well as a late save that preserved the tie until overtime.

Fortunately for the soccer team, it had one more chance to earn its first win of the season before making the trip back to Wes for the week, this time against Eastern University. The game kicked off at 3:00 p.m. this past Sunday, Sept. 9, and once again saw a scoreless first half. The Cardinals put high pressure on Eastern’s defense with a near goal at the conclusion of the half after a Martinez-Paiz header. The second half repeated the lack of scoring in the first half, although the Red and Black outshot Eastern 9-5. With their second overtime game in as many days, Wes did not wait around to put this one away. Mike Gallo ’20 buried a shot from well outside the 18-yard box to give the team its first win of the season. It was Gallo’s first career goal and an important one for the team’s momentum, as conference play kicks off soon.

“We worked really hard as a team throughout the game, so we knew a goal was coming.” said Gallo. “We got the ball into their half and pressed them, Spencer Robbins [’22] put the goalie under pressure, and I collected the ball off the goalie’s clearance, took a touch, and volleyed it in.”

As a team, the Cardinals strong defense allowed the overtime heroics, as Franklin was only forced to make four stops in net. The win concluded a 1-1 weekend for Wesleyan and brought an end to nearly 190 minutes of soccer. The team will be happy to rest before entering NESCAC action this Saturday, Sept. 15, at home against Bowdoin. After only two wins in conference last season, the Cardinals will be eager to start off their home campaign on the right foot.