Ride or Die: Spin Ends Bike-Share Programs Across the Country 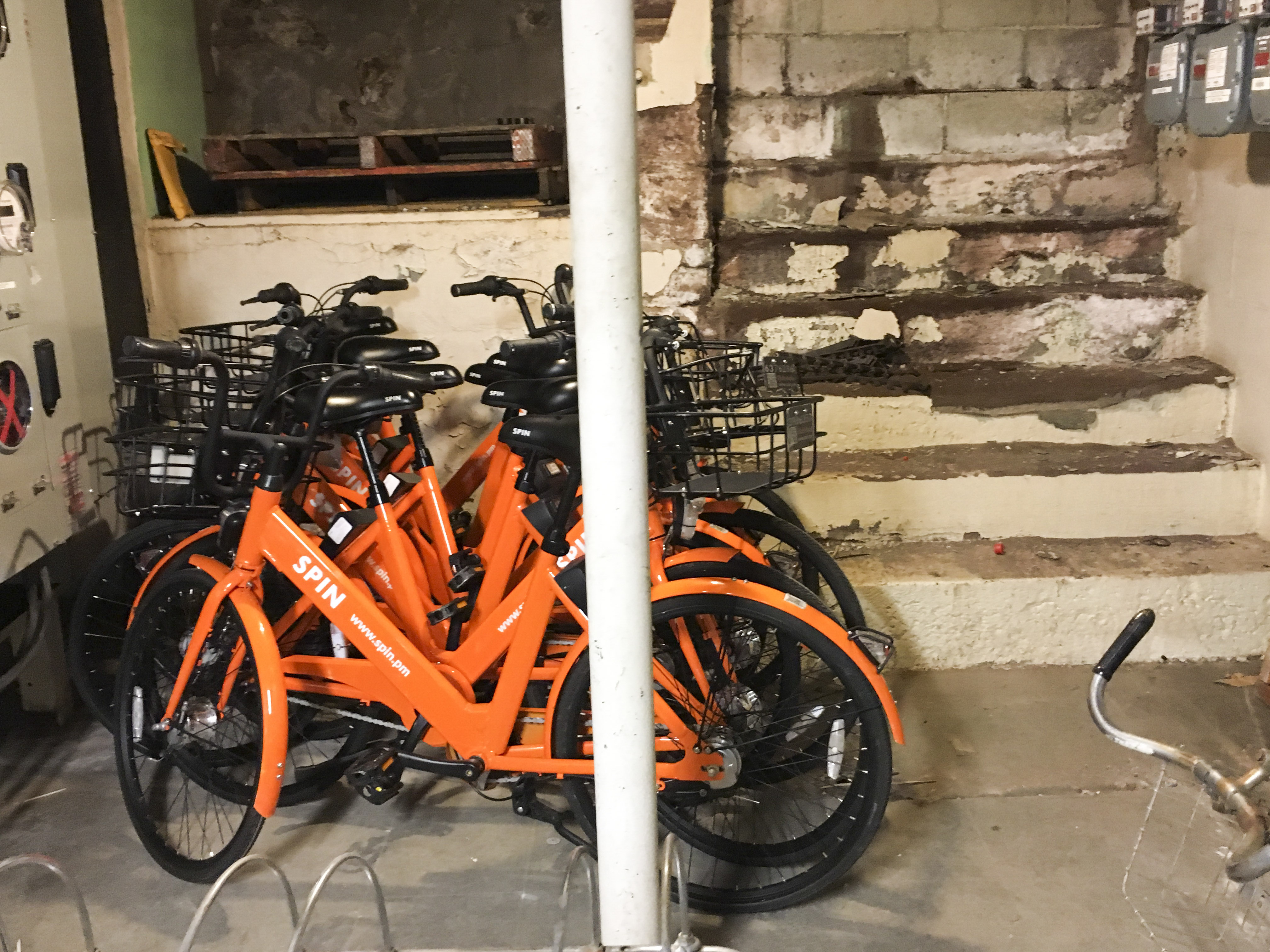 When students arrived on campus last week, they may have noticed something missing. The fleet of one hundred electric orange bikes that had been littered across campus from April to July of 2018 have been removed after Spin, the bike-share company partnered with the Office of Sustainability to bring rentable bikes to the University, decided to end all of its pilot bike-share operations across the country and focus on developing its electric scooter programs.

When Sustainability Director Jennifer Kleindienst started looking into bringing a bike-share program to campus five years ago, the only available options were costly and inconvenient. Only in recent years have companies sprung up that offer bike-share in the model that Spin offers it. Spin came at no cost to Wesleyan, with no demand for additional infrastructure, and at a reasonable cost to student renters. When Spin approached Kleindienst in 2017 with an offer to bring its bike-share program to Wesleyan, she was thrilled. Though she knew it was a risk, it was a risk that she, and the Office of Sustainability, were willing to take.

In some ways, the risk paid off. Just one week after the bikes were introduced to campus, there were over 2000 rides from nearly 1000 individual riders. Kleindienst heard a lot of positive feedback from students, and Main Street store owners were happy to find that the bikes were encouraging students to venture downtown to shop and eat.

The system, however, was far from perfect. As students happily biked all over Middletown, the administrative side of the operation was facing complications. Spin had hired Pedal Power, a bike shop on Main Street, to manage bike maintenance relocation. But Spin didn’t secure their contract with Pedal Power until two weeks after the bikes had been introduced to campus. Consequently, bikes began piling up at certain locations and outlier bikes weren’t being returned to central campus.

Co-owner of Pedal Power Bill McEnery lauded the company for its goals but found that it lacked the logistical competence to handle such a lofty undertaking.

“I really think their intention is cool, it’s just…I think they’re a software company,” McEnery said. “They were very tuned into the idea of the ease of their app and things like that, [but] the idea of this practical stuff…like getting me kickstands when the kickstands were broken, that was like an afterthought.”

Both Kleindienst and McEnery expressed that Spin was a challenging company to work with, as they didn’t have any local management and were largely unresponsive to phone calls and emails. While McEnery has sympathy for the start-up and understands that they are working in unchartered territory, he was frustrated by the apparent lack of planning.

On July 16, Kleindienst received email from CEO of Spin Derrick Ko explaining that Spin would be ending all of its bike-share programs across the country, effective immediately. 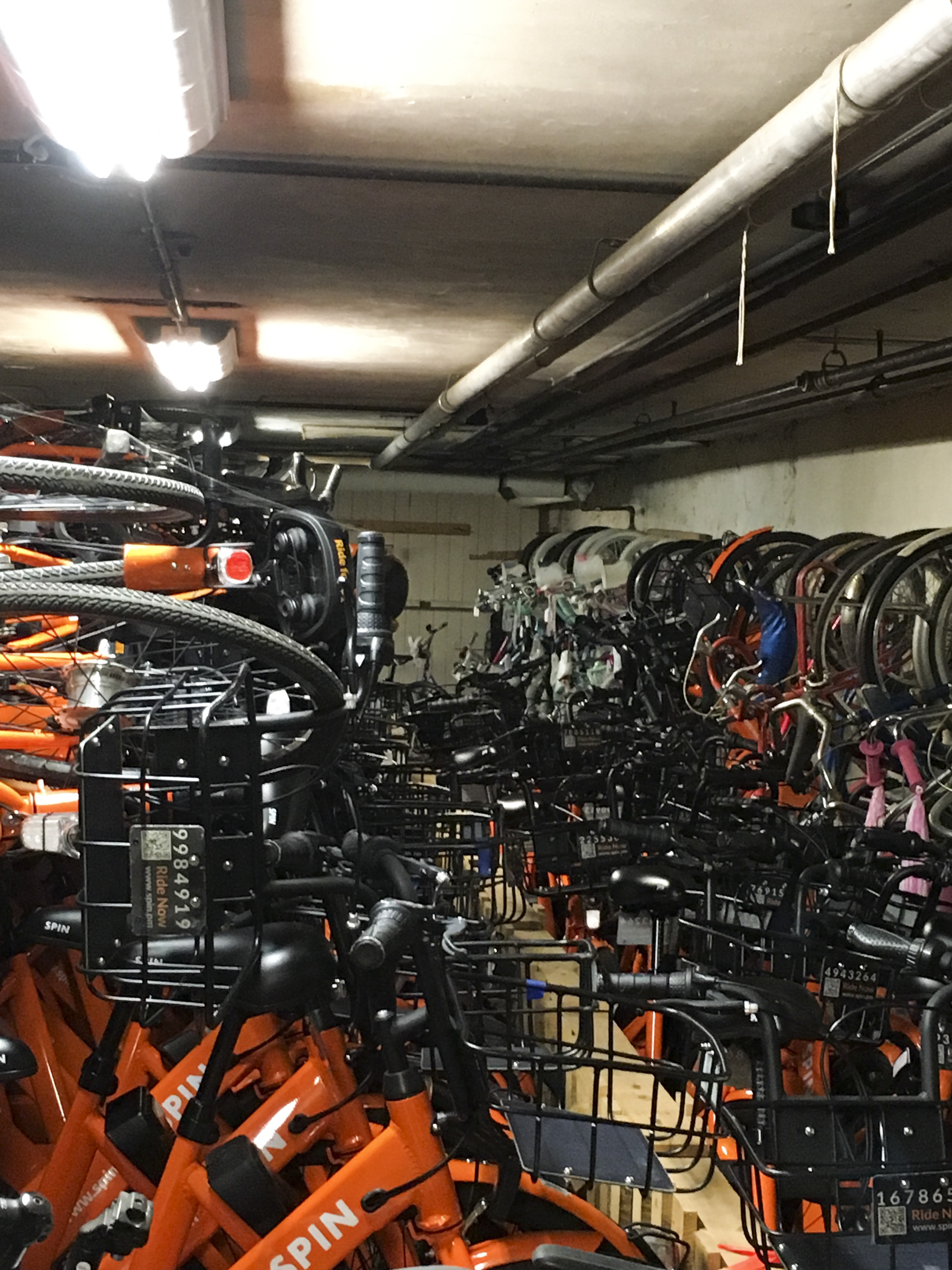 “Spin is a fast-growing, but still relatively young company, and we realized the need to focus on a single product line in order to deliver a world-class experience for our users, city, and campus partners,” reads the email. “As a result, we have made the decision to retire our pedal bike-share program in favor of electric scooters, effective July 16, 2018.”

Kleindienst was surprised by the sudden announcement, recalling that just weeks prior, she had spoken to her designated campus coordinator about making adjustments to improve the ride share program for the coming school year. But Spin made clear that its decision to end the bike-share program would come as a shock to people within the company as well as outside of it.

“This is a recent development and one that our Policy, Partnerships, and Operations folks had no knowledge of while they were working with you on bringing dockless bikes to your community,” reads the email. “We thank you for your support in being one of the first few communities to embrace dockless mobility, and we hope to continue working with you as our industry evolves.”

While Spin’s abrupt departure from campus may have been disappointing both to the student body and to the Office of Sustainability, Kleindienst likes to see the experience as a trial run, one which has made her better equipped to coordinate any future campus bike-share program. She now has a clearer idea of what makes a successful bike-share program, and of what factors she must consider when negotiating with potential partners. Armed with experience, she hopes to have a new bike-share program up and running later this semester.