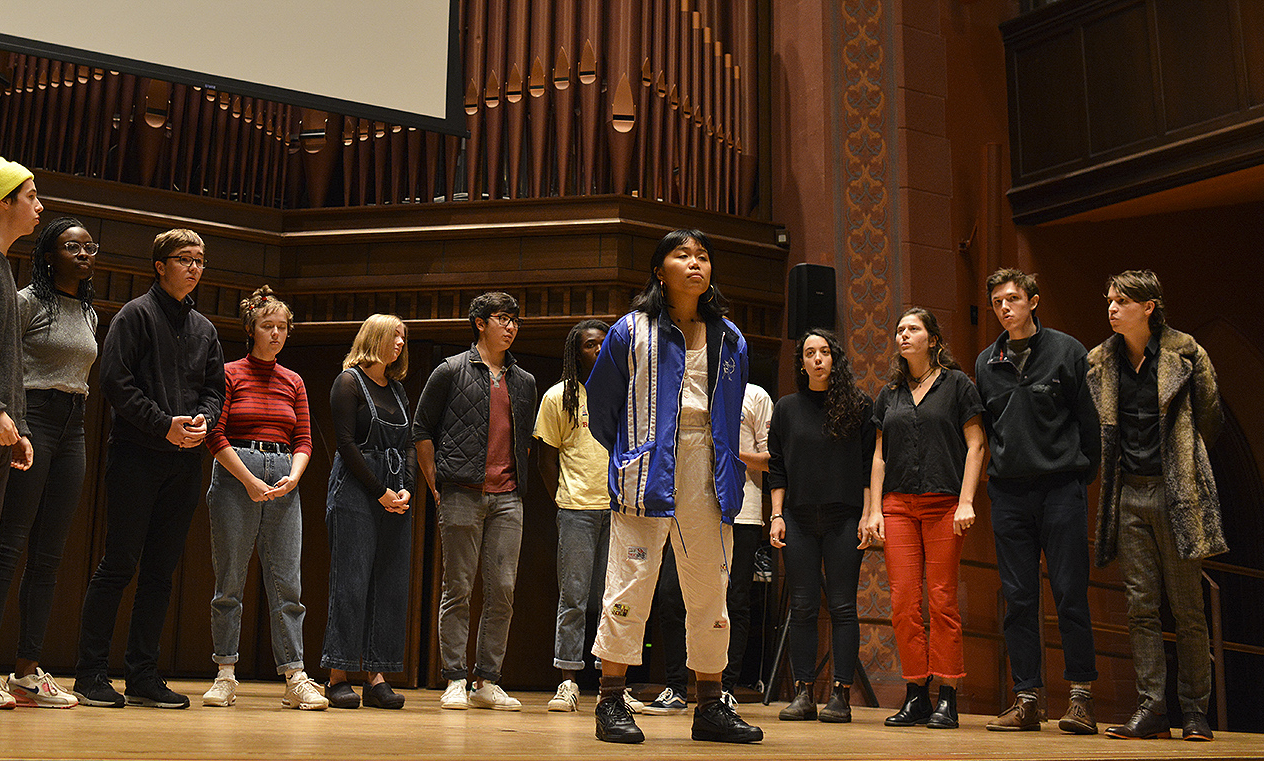 On Sunday, Sept. 2, the University’s a cappella groups held their yearly performance showcase to introduce the first years to the collegiate tradition of singing in libraries. A cappella has enjoyed a recent surge in popularity with the success of the “Pitch Perfect” franchise, and certain groups have achieved an almost cult-like level of devotion to their craft.

The Wesleyan Spirits, the university’s oldest (formerly) all-male a cappella group, performs the most traditional repertoire of fight songs and fraternity favorites, but has been known to shake up their solos (such as when they covered Smash Mouth’s “All Star” at their 2017 Spring Jam). Last year, the Spirits opened up their auditions to include members of any gender, as long as they have a range between tenor and bass. Griffin Barich ’20 has been a Spirit since his freshman year, and considers the group to be some of his closest friends.

“A cappella for me is more than just a group of people who sing together,” Barich said. “These are the people I spend my weekends and free time with and are my best friends at Wesleyan.”

“I was nervous about joining since I was a little older, but I think it actually worked in my favor,” Davids said. “I was able to take on a leadership position a little more quickly, and got really close both with the newer members of the group who joined with me and also with the members that are my age.”

Although she recently graduated, Davids has made sure to keep in touch with the group.

“Notably Sharp was definitely my college family, and many of my best friends, even postgrad, are the friends I made in that group. Honestly, calling it a college family minimizes it—they’re just my family,” Davids said. “Sharps was the group of people I felt most like myself with; they got my humor, and they gave me so much love and support that I felt truly safe with them.”

Notably Sharp is a co-ed a cappella group, of which there are many on campus. Davids was surprised by the lack of competition between other a cappella groups—everyone generally made an effort to be supportive of each other.

“There ends up being a lot of overlap and friends made between groups,” Davids said. “I think it’s always hard at this time of year because everybody wants newbies and often multiple groups extend offers to the same people, but once everyone has made their decisions, groups are usually pretty good about not taking it personally.”

The University’s oldest a cappella group, the Cardinal Sinners, also happens to be one of the few all-women groups on campus. Some of the members, including Zoë Kaplan ’20, resent the comparisons to sorority life.

“A cappella’s ensemble nature lends to really strong bonds between the group, as we’re working together during nearly aspect of the process,” Kaplan said. “That’s why I love being a part of Sinners specifically—we allow anyone to arrange. We may be a womxn-identifying group, but I like to fight the sorority comparison—we come together to sing and make music together, and as a result have become such a close group.”

For those intimidated by strong a cappella fervor, plenty of singers have found a healthy balance between their singing groups and other areas of interest. Sam Petersen ’20, the Spirits’ music director, has learned to take a step back from the group when he feels overwhelmed.

“Being in the Spirits plays a relatively malleable role in my social life,” Petersen said. “If I feel like singing a little bit on a Friday night during a pregame, hanging out with members of the group is great, but if we are coming off of a particularly taxing week of rehearsals and I just want to spend time with other friends, I don’t feel an obligation to see members of the group.”

Connor Bennion ’18 is often considered by his friends to be the “Daddy of A cappella.” He has performed in a cappella groups at the University for six years, and spent four summers as a member of the Vineyard Sound, a professional a cappella group based in Martha’s Vineyard. Towards the end of his career, he began music directing for both groups. Many of his a cappella-mates admire him for his natural musical ear and his booming, room-filling voice.

“For a few years prior to around 2012, a large number of Wesleyan’s niche a cappella groups—The Mixolydians, Slavei, Waiting In Line—were formed,” Bennion said. “Some of those groups fizzled after a few years, but some still are around, which gives different opportunities for people with different abilities and interests that didn’t exist before. Also, upon matriculation, the class of 2014 had an unusually large number of good singers, which directly led to the founding of Notably Sharp and Slender James.”

Bennion noted that over his time at the University, the demographic of a cappella singers also shifted. When he first started, more athletes had the free time to participate in non-athletic extracurriculars like a cappella, whereas now there is more overlap between the a cappella and the active student theater community. Additionally, Bennion credited the popularity of a cappella-related media to the new personalities in the scene.

“Perhaps more importantly for the scene itself, the type of people likely to do a cappella has changed,” Bennion said. “There are more people that view a cappella as a ‘cool’ or ‘popular’ thing, thanks to media like Glee, Pitch Perfect, and The Sing-Off, so there are a few larger egos in the a cappella scene now.”

Regardless of the size of your ego, range, or tuning fork, a cappella has become a home for many members of the University community.