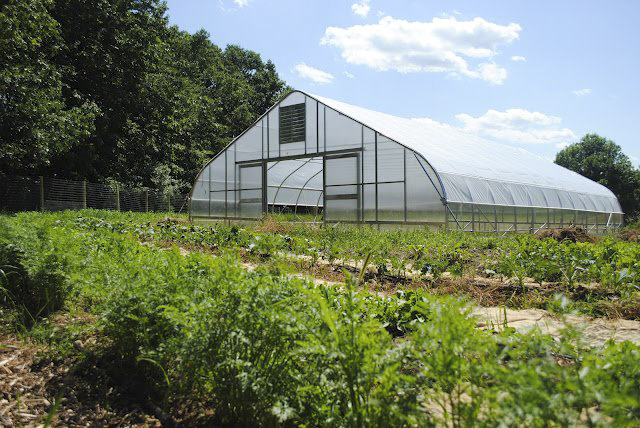 Late last May, after most people had deserted campus to intern, travel, or work, 10 students set to work at Long Lane Farm, determined to care for the land as best they could during the most important and fruitful harvest season of the year.

The student-run farm, which strives to use sustainable farming practices and engage with the Middletown community, has been operating year-round since it was founded in 2004. The summer farmers, hired by the University, were responsible for growing and maintaining all of the crops, and for selling or donating most of their harvest. Throughout the summer, they sold produce at the North End Farmers Market every Friday, and ran their own farm stand twice a week. However, most of the farm’s harvest wasn’t sold, but instead donated.

“I think one major part of our mission is feeding the community,” said Julia White, ’20, who worked at Long Lane both this and last summer. “Since we are paid by the school, by Bon Appetit, and we get grants from the Green Fund, it’s sort of our duty to give away as much food as possible. So we do big donations to food pantries and the soup kitchen on Main Street, St. Vincent.”

White believes in Long Lane’s cause, but worries that such community engagement could be seen as paternalistic or patronizing. This is why they emphasize the farm’s eagerness to respond to community needs, rather that dictate them.

“I think generally we try and have relationships that feel like people are coming to us rather than putting ourselves into spaces,” White said. “For example, there’s one woman from Middletown who runs a free food stand, who asked us to donate. We were happy to give her a ton of food, because that’s what we’re here for.”

The farm also prides itself on using many sustainable farming practices, and harvesting not only organic but pesticide-free produce. The farm’s faculty advisor, Paul Erickson, emphasizes the philosophies of writer Eliot Coleman, who sees pesticides as disruptive to natural process of growth and adaptation.

“Coleman’s whole philosophy is that if there are pests, it’s not something we should disrupt with pesticides,” White recalled. “We just need to work with the ecosystem to restore balance. We need to use plants to treat plant problems. And that’s the philosophy that we employ as well. So we don’t use pesticides, but we plant cover crop which is supposed to restore nitrogen in the soil after other plants take it out. And ideally, if the soil is healthy, it’s not as healthy an environment for pests.”

In addition to harvesting crops to sell and donate, the summer farmers also cared for several ducks. When one duck named Georgia died of unknown causes, the farmers sprang into action, notifying alumni who knew the ducks, organizing a funeral, and even eulogizing her in a heartfelt poem.

“Georgia was fine white wine\ Sharp edge with sweet undertones,” read the first two lines of the poem. “A sprinter, a flyer, a dancer\ lightly treaded on webbed feet.”

One of the Long Lane’s most remarkable feats pertains not to what they do, but how they do it. Long Lane is a cooperative organization: it has no official leadership positions.

“All of our practices are collective practices, so we’re not supposed to have anyone leading or dominating,” said White. “[Our weekly meetings] were kind of our collective way of organizing—everyone would add to the agenda, everyone would make points, we tried to make sure that everyone had an equal say in decisions that got made.”

As the year-round student farmers begin to return to Middletown and to Long Lane, White anticipates that it may become more challenging to make collective decisions with 20 people, instead of 10. Cooperatively-run organizations often face challenges in delegation and accountability, and it’s hard to prevent the burden of responsibility falling more heavily on some shoulders than others. Still, members of the Long Lane community have the best interests of the farm at heart.

“At the end of the day, there are going to be some people who are taking more initiative than others and some people who are more invested in the farm and knowing what’s going on,” said White. “I think the idea is that everyone has an opportunity to be that person and there’s no limit to how many people that can be. I think it’s just the responsibility of that person or those people to make it welcoming to anyone else who wants to be in that space.”