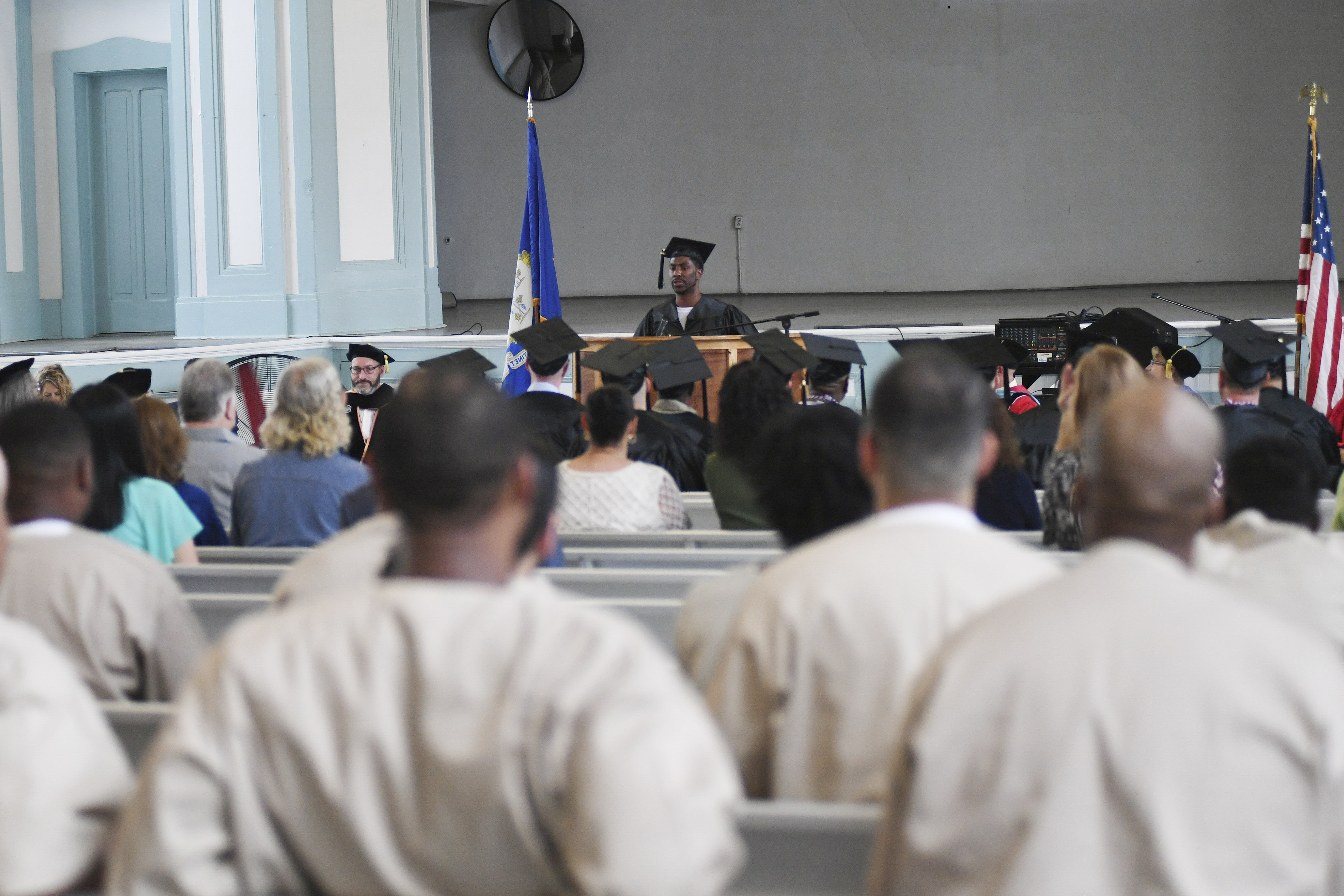 For the first time ever, 18 incarcerated students from the Cheshire Correctional Institution received Associate Degrees through the joint program between Wesleyan University’s Center for Prison Education (CPE) and Middlesex Community College.

Russell Perkins ’09, who helped spearhead early efforts that became CPE, described his thoughts on the graduation and the program itself.

“College in prison gives Wesleyan a way to redistribute access to higher education by addressing its resources to a community that is profoundly alienated from educational opportunities,” Perkins wrote in an email to The Argus. “This graduation is a super exciting milestone, and a chance to celebrate all the incredible work of CPE students, faculty, staff, and supporters.”

According to Perkins, the CPE grew from nearly a decade of activism and volunteering from undergraduates at Wesleyan. The graduation in August came from the roots of students in the early 2000s who advocated to create a college-in-prison program at Wesleyan.

“As volunteers, students would visit the prisons each week to conduct non-credit bearing workshops with people who were incarcerated at Cheshire and York, bringing resources from their Wesleyan classes into the prisons to use as the basis for informal conversation and collaboration,” Perkins wrote. “With guidance from Cathy Lechowicz at the Jewett Center for Community Partnerships, that volunteering grew over the years, so that by 2009 there was a critical mass of students whose experience at Wesleyan had been shaped by learning together with incarcerated folks.”

Since then, CPE has provided accredited Wesleyan courses to students at the Cheshire Correctional Institution, a maximum-security prison for men. The courses are taught by Wesleyan faculty, and the subjects range from biology to philosophy and more. Wesleyan University students are involved too, with about 50 or so each year working in study halls at the prison or on campus filling out research requests and serving as project assistants.

The commencement ceremony in August brought out many emotions for those in attendance. CPE Academic Manager Kristen Inglis said she felt unadulterated joy watching the ceremony.

“It was an indescribable experience to see the achievements of CPE students acknowledged, to meet students’ friends and families, and to see gathered together all of the people who together have made CPE a success,” she wrote in an email to The Argus.

William Griffin Professor of Philosophy Lori Gruen taught her first course for CPE in 2010 but had been involved in the program before it started offering courses.

“I was proud and so moved by their achievement,” Gruen wrote in an email to The Argus. “I knew it would be emotional for me after working with the men for so long, but I was surprised by how moving the event was. I was also so touched by the gratitude that the incarcerated students expressed toward me. For some of the students, I have been a constant in a context in which there are so many changes. One of the graduates in particular really wanted me to know how appreciative he was of my continuing to come back.”

In an email correspondence with The Argus, Gruen highlighted a few of the speeches from the students at the graduation. She said Clyde Meikle, a deep and poetic thinker, gave a wonderful, radical speech. She also mentioned the power of Roberto Alvarado’s speech about enduring the impact of negative labels as a young person.

“[Alvarado] said he was worried he might break down while giving it and told me he was going to look at me for strength,” Gruen wrote. “I told him not to, as I would probably be crying, and I was, but when he did look at me while he was speaking, I took in a deep breath to help him get through his very emotional speech. He thanked me for that after.”

Gruen also mentioned the speech that James Davis gave at the ceremony.

“James Davis reflected on the ways that so many individuals in the program have challenged and helped each of the students grow,” Gruen wrote. “It was a speech about judgments and how the negative social judgments that he had experienced as a poor black kid had changed into positive judgments from others in the program.”

CPE Fellow Isabel Bartholomew ’18 attended both the graduation at Cheshire and the one prior to it at York Correctional Institution.

“They were really moving ceremonies, and they meant a lot to the students, their families, and all the faculty and staff from CPE,” Bartholomew wrote in an email to The Argus. “It is no easy task to complete college coursework while in prison—the conditions are not ideal—and it’s so important to acknowledge both the extremely hard work that the students put in and the extra lengths that our professors and other staff have gone to in order to make the program run.”

The Meaning of This Education 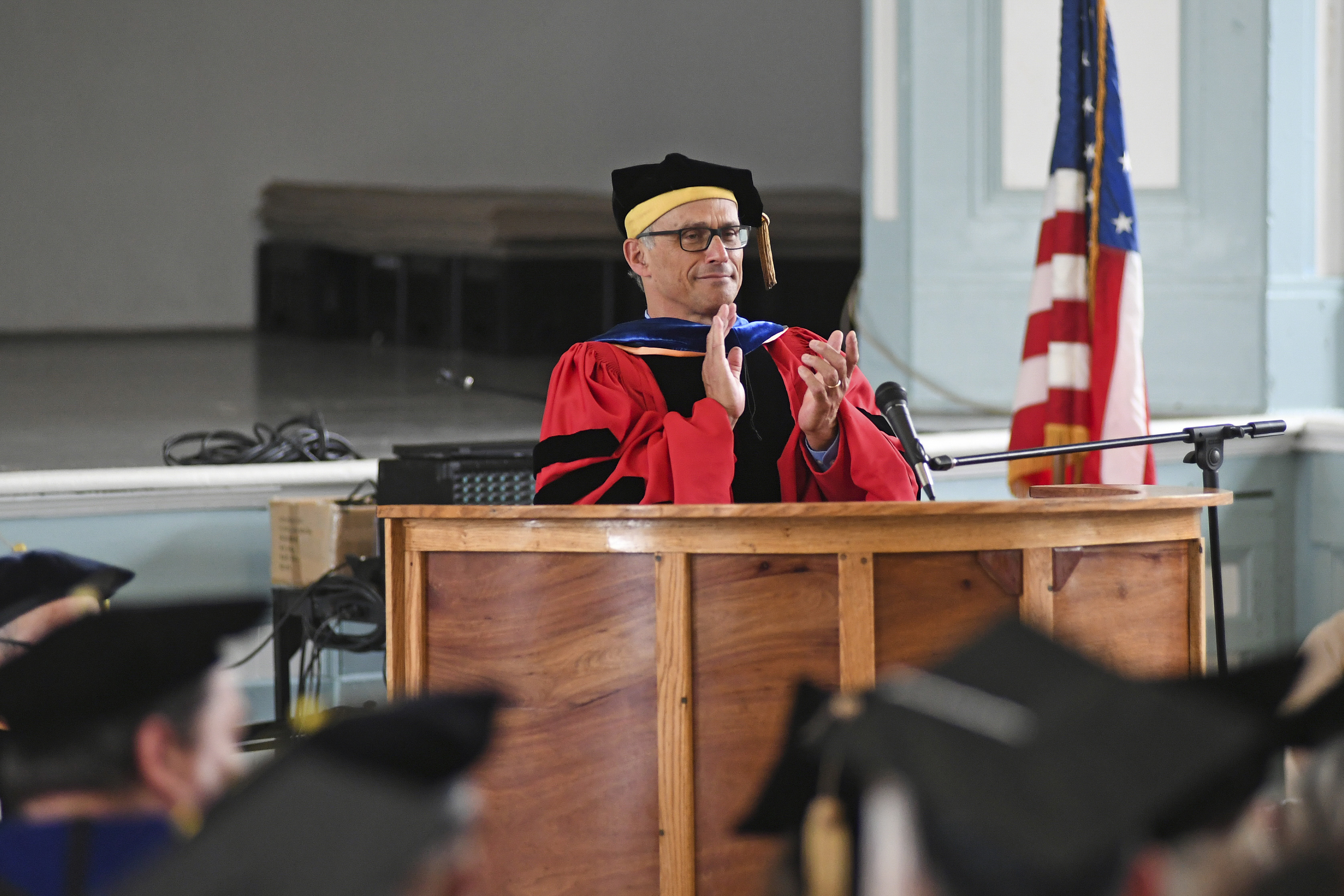 Bartholomew noted that the manner in which this achievement was marked, both by the ceremony itself and press attention, is vital for this project.

“Prison education substantially reduces recidivism, better prepares prisoners for reentry, and expands access to privileged educational resources to nontraditional student populations,” Bartholomew wrote. “Beyond all of this, though—at least for me—it matters because programs like CPE work to interrupt some of the dehumanizing and racist violences of mass incarceration in this country. Rather than seeing prisoners as ‘undeserving’ or disposable, we want to acknowledge and serve them as the capable students that they are.”

Inglis furthered those sentiments asking why a liberal arts education mattered and applying the answer to incarcerated students.

“A liberal arts education nurtures the mind; helps us discover who we are and what we want to do; and does all of this in a way that prepares us to be more effective agents in the public sphere,” Inglis wrote. “If this is why college is important, it is also why college in prison is important.”

Inglis continued her thoughts, talking about why programs like CPE are vital not only for the incarcerated students but also for the entire campus community.

“[Wesleyan] faculty consistently report how teaching for CPE has energized them as scholars and teachers and made them better instructors when teaching back on the main campus,” Inglis wrote. “And by serving as teaching assistants and tutors at Cheshire and York, Wesleyan main campus students are able to be part of a larger, more diverse academic community, one that includes people whose backgrounds, experiences, and perspectives can be markedly different from those of most of the student body on Wesleyan’s campus. That intellectual diversity makes a Wesleyan education a better education, and makes Wesleyan a stronger institution.”

Student volunteer Mary Johnson ’21 echoed these sentiments. She spoke about the importance of the ceremony for the incarcerated students.

“I think the graduation and the degrees that were awarded are an expression and a validation to the world of the incredible hard work the students in York and Cheshire have been doing for years,” Johnson wrote in an email to The Argus. “A college degree carries significant weight in our society, and being able to provide a pathway to obtaining one for students who otherwise might not have otherwise had the chance…is a hugely important step in fulfilling the CPE’s mission… This graduation is a powerful recognition of what CPE students can achieve, and it makes me happy to have been part of the CPE during my time at Wesleyan.”

Like Johnson and others, Gruen emphasized the importance of education in this country, especially for those who have been incarcerated.

“Education provides the tools for critical self-reflection and thoughtful engagement with one’s community,” Gruen wrote. “People who are incarcerated usually have been denied multiple resources—economic resources, social resources, and educational resources. These denials are not unrelated to the circumstances that contributed to their incarceration. Education is not just a way to bring about a more equitable society, but is a tool for reclaiming dignity and self-respect in a society that is intent to deny it to those who are already marginalized.”

A Potential for Growth

Gruen, along with Inglis and Perkins, all discussed possibilities for growth in the future—their hopes for what changes this graduation might bring to CPE and programs like it.

“Currently there are no Bachelor’s degree college programs in CT state, so that’s an area where there’s huge room for growth,” Inglis wrote. “And while right now there are a number of schools in CT that offer college in prison programming, their focus tends to be on vocational training, not the liberal arts. I’d like to see those schools expand their offerings to include the liberal arts, so that incarcerated students can pursue a liberal arts education if they want to.”

“Looking forward, I hope Wesleyan will continue to demonstrate its institutional commitment to this field by taking the next logical step to offer its bachelor’s degree to incarcerated students,” Perkins wrote.

Gruen also spoke of the potential for establishing a way for incarcerated students to earn a bachelor’s degree.

“I think that would be an exceptional way for Wesleyan to further embrace our commitment to justice and equality and to give back to those who are less fortunate,” Gruen wrote. “Since the students have been taking Wesleyan courses, many of which are really challenging, those that complete the appropriate course of study should get a Wesleyan degree.”