Back to the Gridiron: Football Seeks First Opening Weekend Win Since ’14 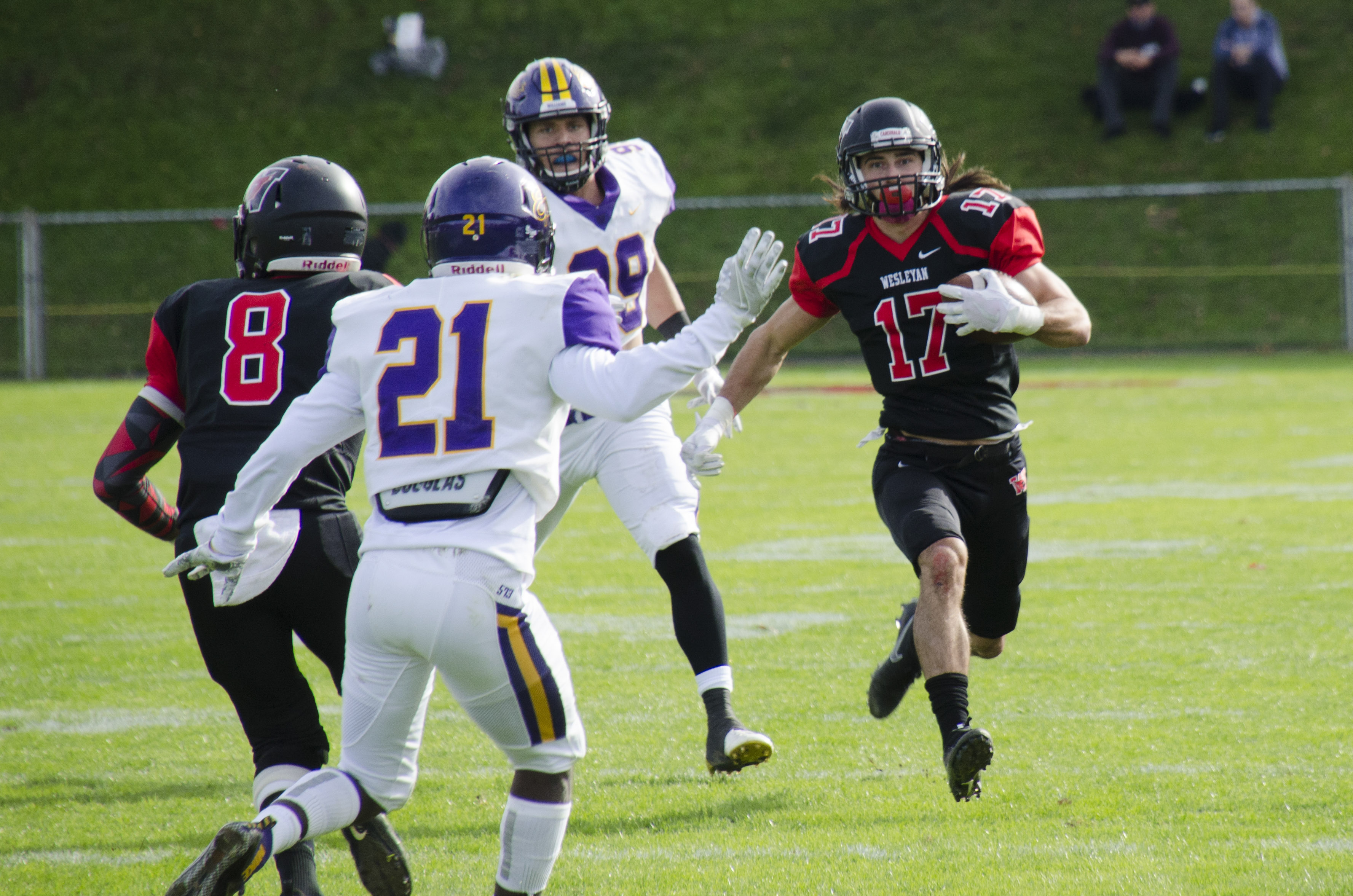 The boys of fall are back. Gridiron fans around the country can now rejoice as football season has officially returned. For the students and faculty of Wesleyan, this means the bleachers have arisen on Andrus Field once again, creating the beloved Corwin Stadium.

As Wesleyan football gets ready to take the field, let’s first recap last season. The Cardinals are coming off a solid 6-3 season with an impressive 4-0 record at home. A major key to their success was defense. The Birds allowed a stellar 16 points per game, proving they had one of the best defenses in the NESCAC.

However, just like any new season, there are some changes. Wide receiver Mike Breuler ’18 is no longer with the Cardinals. Last year, he was named NESCAC Offensive Player of the Year, as well as a member of the DIII All-American Honorable Mention list. He racked up countless accolades his senior year because, to put it simply, he balled out. But he has graduated. So, where does the team’s offense go now? Enter senior quarterback and captain Mark Piccirillo.

Piccirillo has been an outright starter at Wesleyan since his freshman year. He has more than enough talent and experience to lead the Cardinals this season. Through all his experience, Piccirillo knows that preparation is a big key to success on the gridiron.

“I’d say personally to prepare for this season I’ll be watching a lot of film on opponents early into game weeks to really get enough mental reps on what I have to do,” said Piccirillo. “I go into practices with the mindset that each day is gameday. Also, I will be getting countless reps with my receivers every day to establish the chemistry needed to make plays on Saturdays. That confidence is everything in football.”

The Cards will need that confidence, as they have high expectations for this season.

“Our goal is to win a championship,” said tight end Ryan Earle ’19. “With the talent we have as a team, we definitely believe we can do so. But right now, we are just trying to get better every day and work towards beating Middlebury week one.”

The team definitely has Middlebury on its mind, and for good reason. The past four years have proven that the first weekend game isn’t easy.

“Our senior class hasn’t won an opening weekend game, so that is a big motivation for us,” said Earle. “I think the guys have really worked hard in the offseason and dedicated themselves to train to win.”

Personally, this writer is excited to watch running back Dario Highsmith ’20 make more crazy acrobatic plays like he did last season. He’s a playmaker (his position was formerly listed as simply “athlete”) with huge potential at the DIII level. A native of Middletown, Highsmith has a lot to prove this season alongside a solid cast of offensive weapons such as Sean Penney ’21.

In addition, when we talk about the football team’s success, we cannot forget a major part of the team: the coaches.

“Our coaching staff is first class,” said Earle. “They come from winning and their individual accomplishments speak for themselves. They are extremely knowledgeable and put in so many hours. When it comes to Saturdays, they prepare more than anybody.”

Overall, the football team is amped up. Every player that I interviewed was extremely excited and answered every question with enthusiasm and passion. I could really feel it.

One such player was Harrison Karp, a sophomore lineman.

When asked his favorite thing about playing football, Karp said he enjoys the little, often unnoticed aspects of the game.

“My favorite thing about this year’s team is definitely the level of competition in practice,” said Karp. “We have really stepped up the intensity, especially along the offensive and defensive lines. We are really giving each other top-notch full speed looks.”

This year has the potential to be historic for the Cardinals; it’s certainly something to get excited about.

“This year, I see our team going out on gamedays with a lot of energy, flying around, and being positive,” said Piccirillo. “I love what I see from the younger guys on the team. They will have a big impact on bettering the team.”

Ben Owen can be reached at bowen@wesleyan.edu and @benjaminowen28 on Twitter.