There’s something wrong with one of the armchairs in Usdan. Upholstered in blue fabric and tucked away from the coffee line, the chair first strikes passersby by dint of merely being out of place: It sits adjacent to the glass case of student art as opposed to mingling with the other couches and chairs in the student lounge space. But in addition to this geographic incongruity, the armchair has probably already caught and held your attention because of the sewn stuffed fabric guts teeming out of its interior. The artistic brainchild of Josh Rabineau ’20, who created the piece for the Sculpture II class, the famed armchair has garnered curious attention campus-wide. In this article, our Arts & Culture Editors, along with Staff Writer Dani Smotrich-Barr ’20, give passable scholarly critiques on the illustrious chair and discuss how it’s affected our wellbeing as we traverse what is doubtlessly already the most anxiety-inducing space on campus. 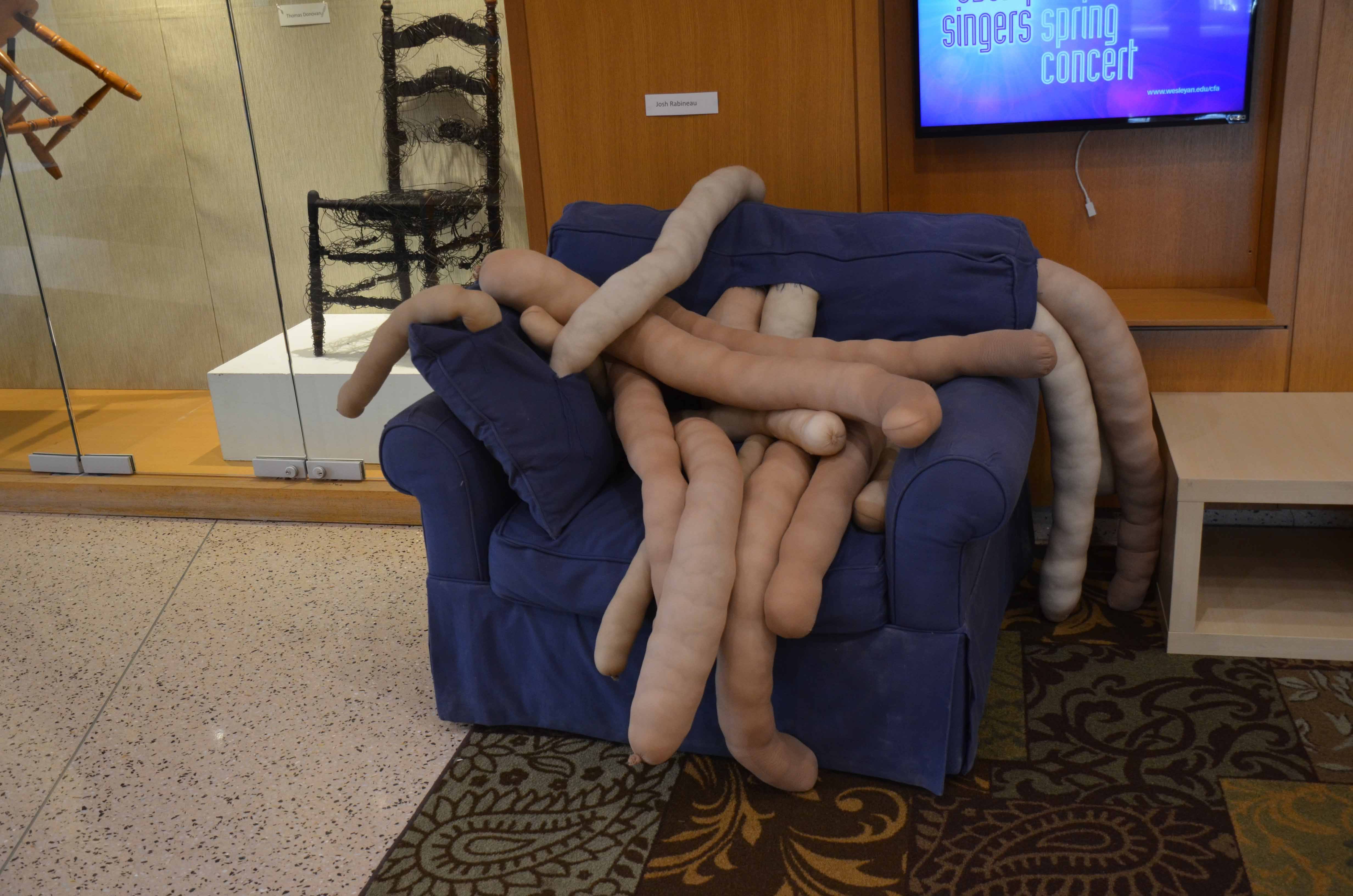 Viviane Eng ’18: The sculpture is nothing short of evocative, repulsive, and tremendously effective in its impact, and breathes an eerie sense of life into a formerly inanimate object. I find myself likening the piece to the office furniture in Herman Melville’s short story, “Bartleby the Scrivener,” which take on personified characteristics while the disgruntled workers become reduced to machines, devoid of their humanity. By avoiding a more Realist depiction in his work, perhaps Rabineau’s intention is to make a capitalist critique similar to Melville’s, which maintains that in the post-industrial consumerist age, we risk positioning the value of inanimate objects above that of people, blurring the line between people and things.

“I can’t tell if I love it or hate it,” is something I often hear when walking by the chair with friends in Usdan. This is justified: The sculpture’s “innards” encourage viewers to avert their gaze in reaction to its sheer grotesqueness, which reminds us—in too much detail—of what’s within each of our bellies. At the same time, it’s hard to look away from the chair. It transfixes by virtue of repulsiveness, but is also, oddly enough, really funny. This combination of characteristics fascinating and revolting hearken back to childhood, when bathroom humor entranced our little minds in a similar fashion, rendering natural bodily processes disgusting, absurd, magnetic, and all-consuming. The chair is also reminiscent of Yayoi Kusama’s Accumulation No. 1, a similarly stuffed fabric couch overrun by phalluses. Aside from Kusama, Rabineau cited a number of sources of inspiration for the sculpture, which he discussed with The Argus via email:

“The prompt was to play with the functionality of furniture and how furniture structures humans’ interaction with themselves, others, and space. I knew I wanted to work with materials that somehow questioned our understanding of furniture as inanimate, lifeless objects. I was inspired by Sarah Lucas and Louise Bougeois who both have famously worked with stuffed tights (which are the materials I used). I didn’t set out to make something that is perceived as disgusting and vile, but I’ve really enjoyed seeing peoples’ visceral reactions to the piece and hearing the different interpretations of the materials (I’ve heard sausage links, intestines, severed and phallic limbs, to name a few).” 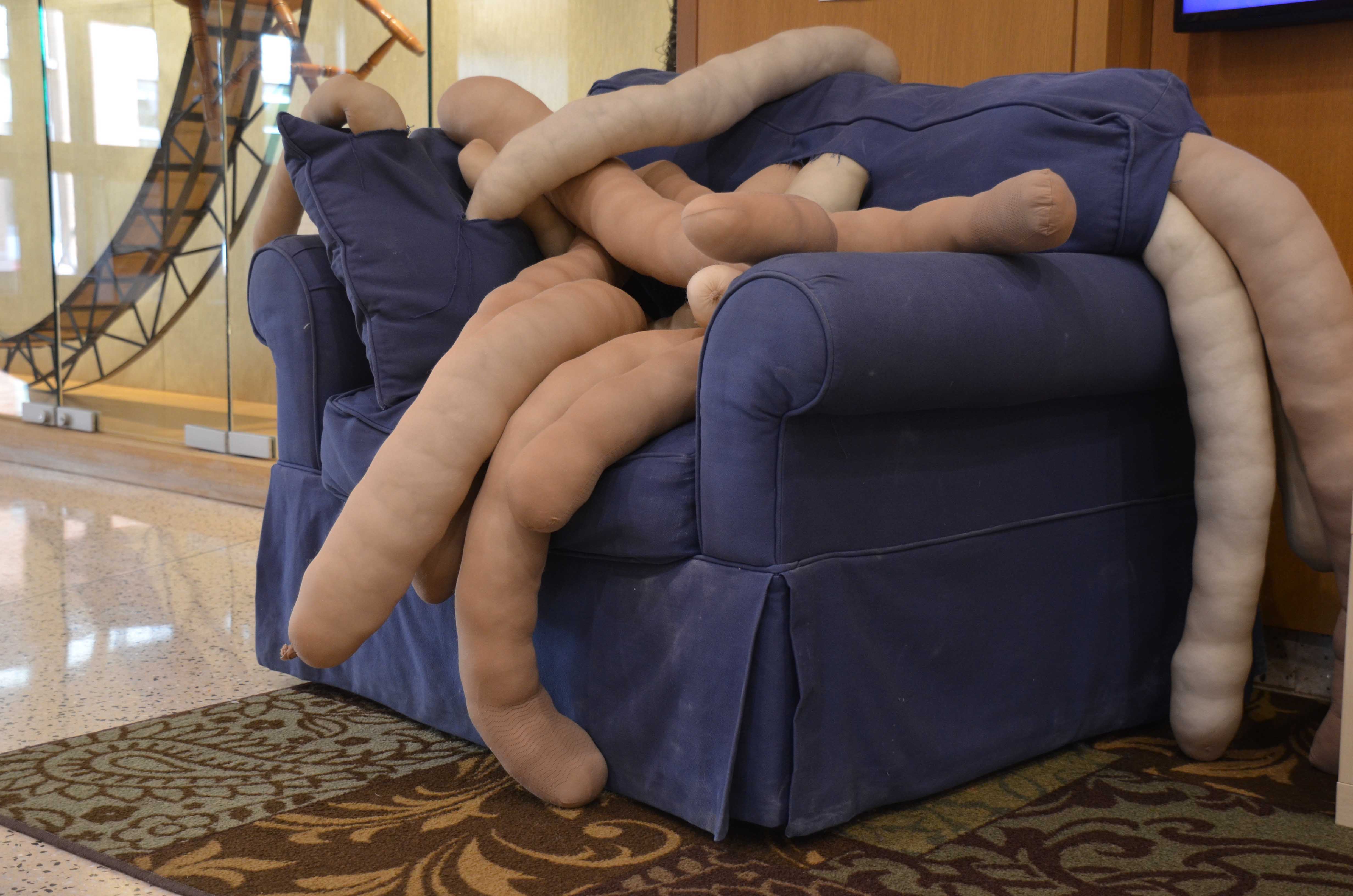 Connor Aberle ’19: Theater pioneer Antonin Artaud thought that theater should nauseate. He believed it should be a disorder that brings to the fore that which is kept under the surface. And that is exactly what Rabineau’s chair does.

All of the chairs on display are somewhat unsettling, making a typically welcoming object, the chair, morbidly uninviting. One has barbed wire wrapped around it while another is morosely attached to a cinder brick on a seesaw-like structure. Rabineau’s chair is nauseating rather than subtly unsettling because it explodes the innards out from their container.

It is so deeply upsetting because it reminds us of what we hold inside. Identity is constructed in the interactions we have with others. Rather than some essence within us, identity is built through presentation to others. We submerge dark, sad, or weak secrets to maintain this identity. Revealing these secrets threatens identity itself. And our fear of this chair stems from our fear of being exposed.

To be exposed in American culture is to be a victim. We all have secrets, and therefore exposure is not a threat for what it may reveal, but what it may destroy. Exposure threatens to undermine the cover we’ve carefully crafted—like a comfy chair whose innards have burst through its cover. 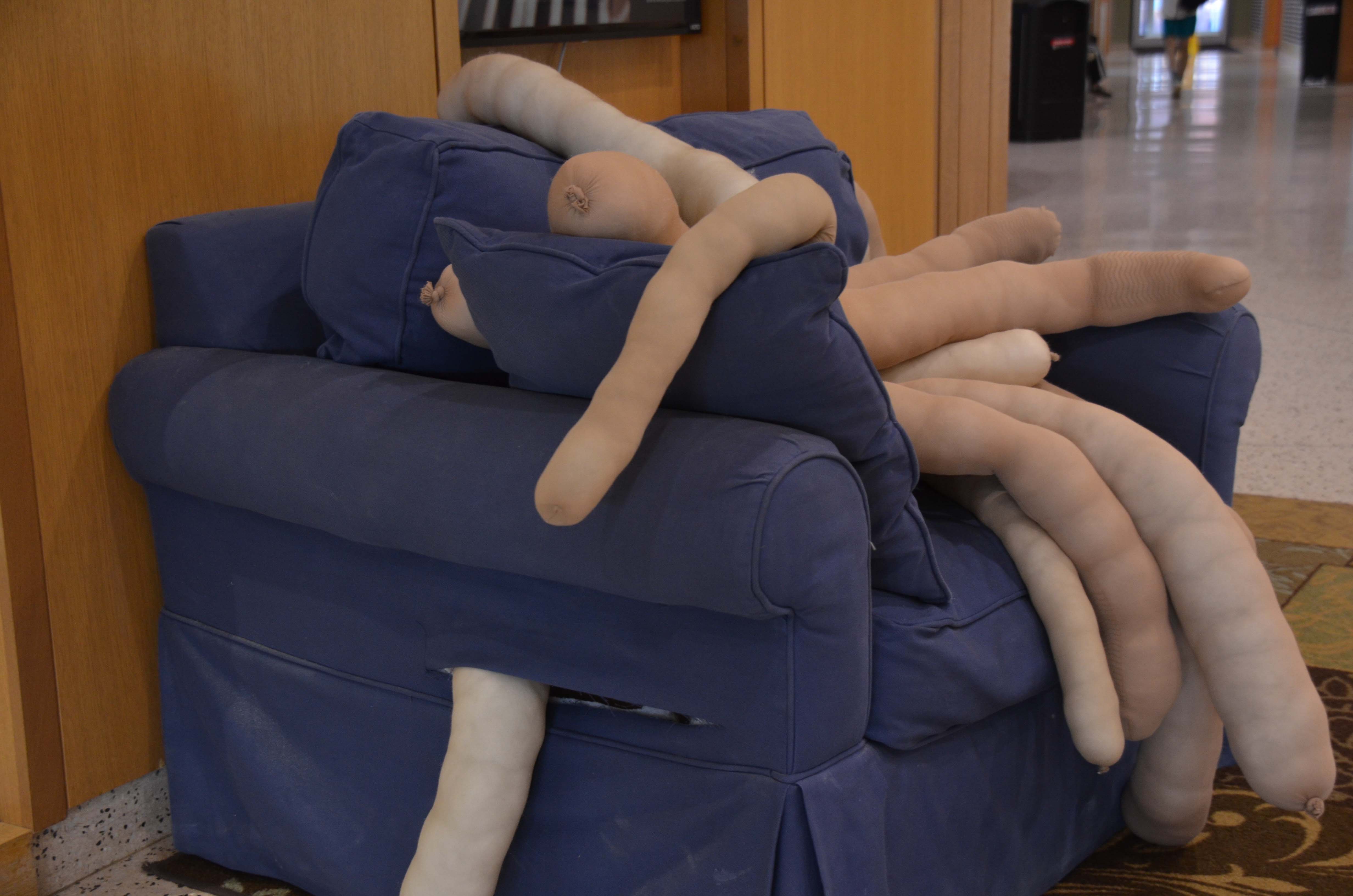 Tara Joy ’20: “Always design a thing by considering it in its next larger context,” famed art nouveau architect Eliel Saarinen once said. “A chair in a room, a room in a house, a house in an environment, an environment in a city plan.”

Viewed in the larger context of Usdan University Center, Rabineau’s sculpture attains a new level of unsettling morbidity. Amid the quotidian hustle and bustle of Usdan, the chair is vividly and obviously out of place. You might be on your way to pick up a package, or to use the bathroom, or to do any one of a number of equally mundane tasks, when all of a sudden, there it is: a squishy, comfortable-looking blue armchair whose inviting appearance is marred by a tangle of sausage-shaped, vaguely phallic beige innards that burst from its seams. Simultaneously grotesque and fascinating, it’s hard to look at the sculpture, but even harder to look away. Seeing the chair unexpectedly feels like walking into a Magritte painting, where everything is almost recognizable, but not quite. Not only the chair, but everything surrounding it starts to feel vaguely, inexplicably, wrong. Rabineau’s sculpture is a jarring reminder of the mess of organs pulsing inside us all, and of the thin line between the everyday and the surreal. We are all just one burst seam away from spilling our guts to the world. 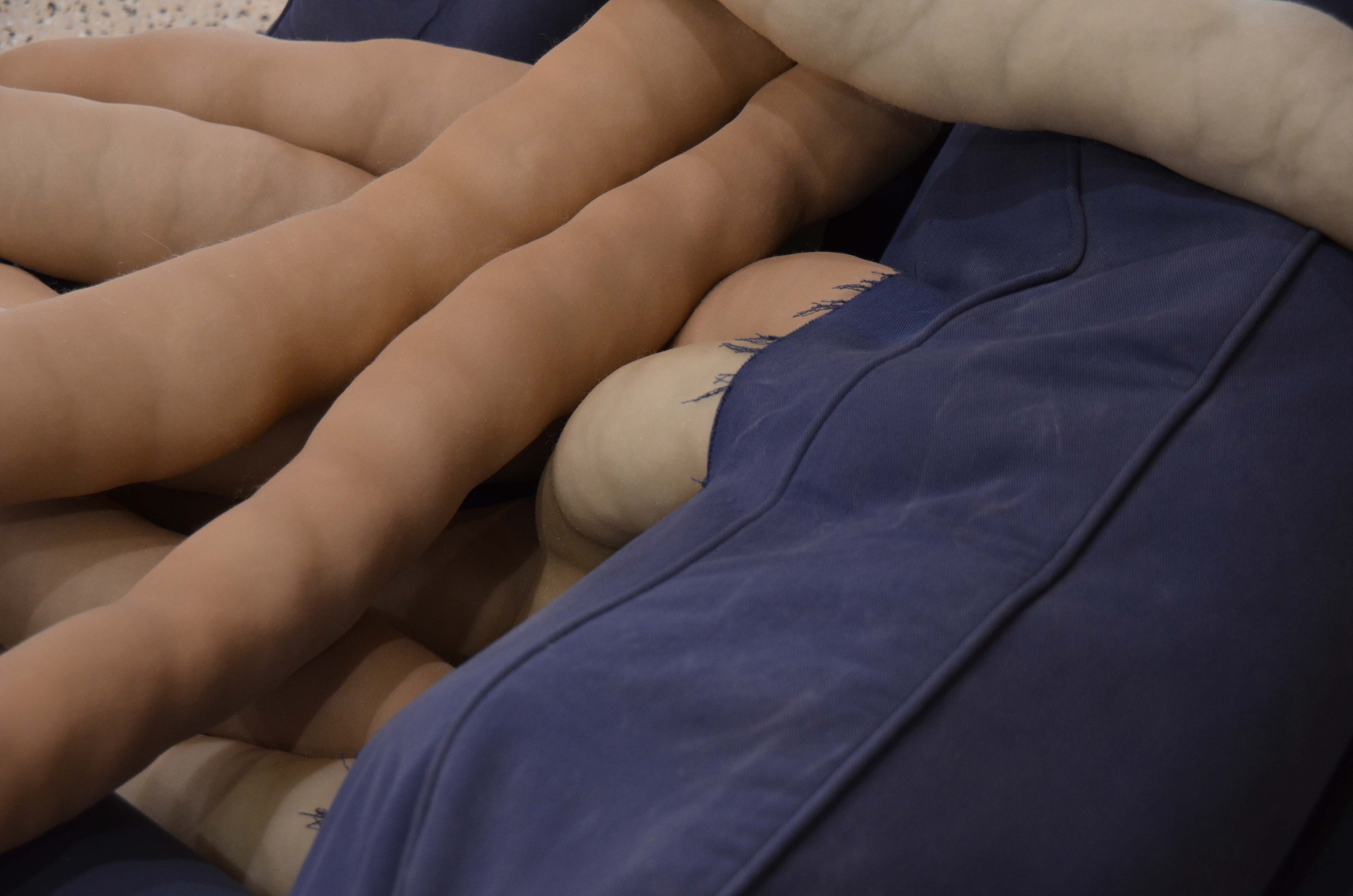 Dani Smotrich-Barr: Walter Benjamin, in his seminal tract, “The Work of Art in the Age of Mechanical Reproduction,” suggests that “[Mankind’s] self-alienation has reached such a point that it can experience its own destruction as an aesthetic pleasure of the first order.” Rabineau’s piece can be seen through such a lens as an examination of the way in which we are alienated from the physical objects that occupy our daily lives. The familiar, the chair, is made strange by the imposition of phallic objects within its interior. We can also read the chair through a gendered lens: throughout human history, women have been associated with the tactile (handicrafts, childcare) while with the Industrial Revolution, male workers became increasingly alienated from the products of their labor. By covering the soft chair with phallic objects, Rabineau suggests that all genders, perhaps, can benefit from tactile intimacy. However, by presenting such a scenario in a surreal, off-putting context, the piece suggests the extent to which society has Othered “softness” in male bodies. Of course, this interpretation, like the piece itself, is speculative. 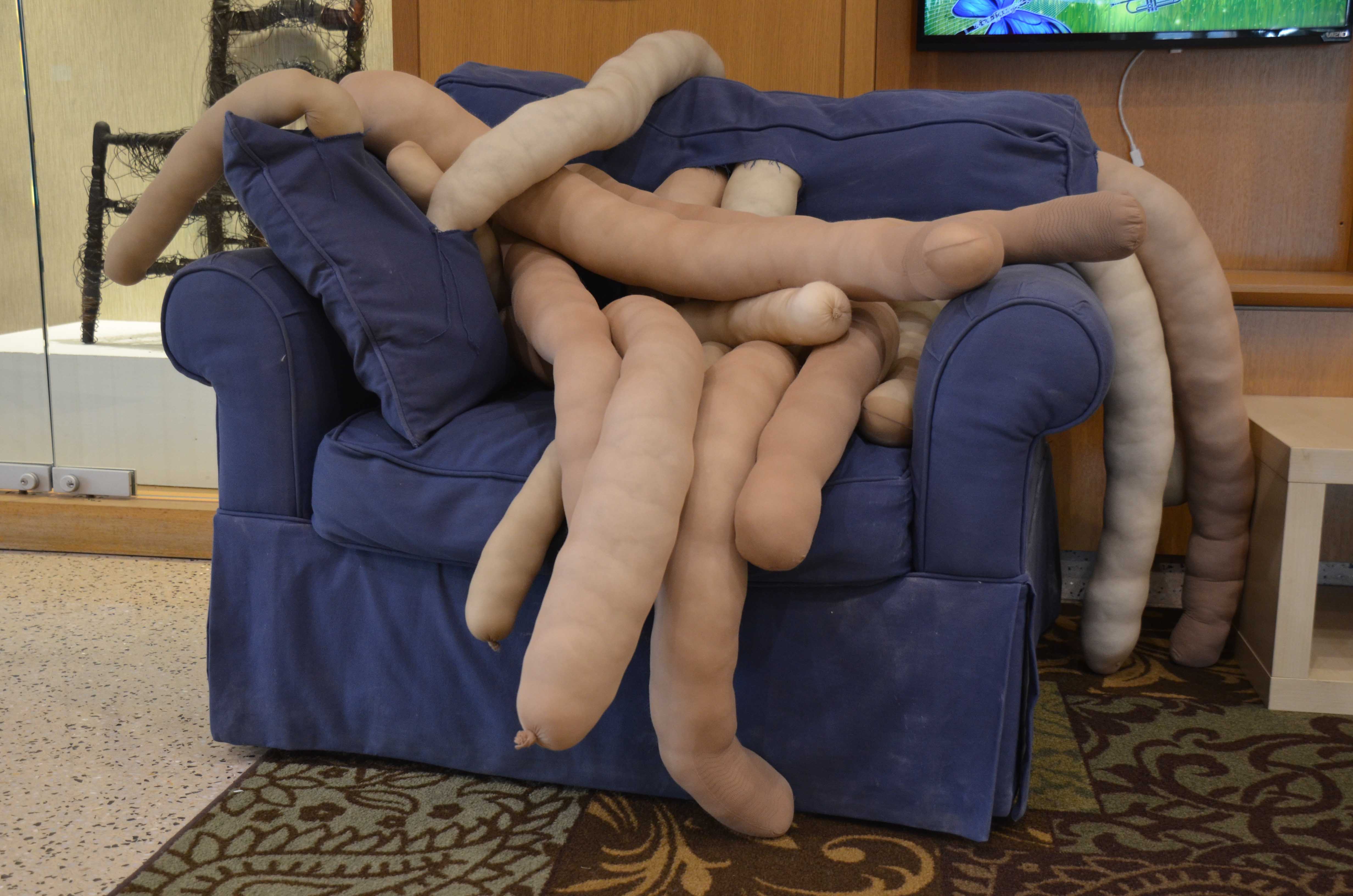 Henry Spiro ’19: The chair scares me when I enter Usdan, and I forget that it’s there.

Connor Aberle can be reached at caberle@wesleyan.edu

Henry Spiro can be reached at hspiro@wesleyan.edu and on Twitter @judgeymcjudge1