Snorting Success: Adderall Use Stands Between Counterculture and Academics 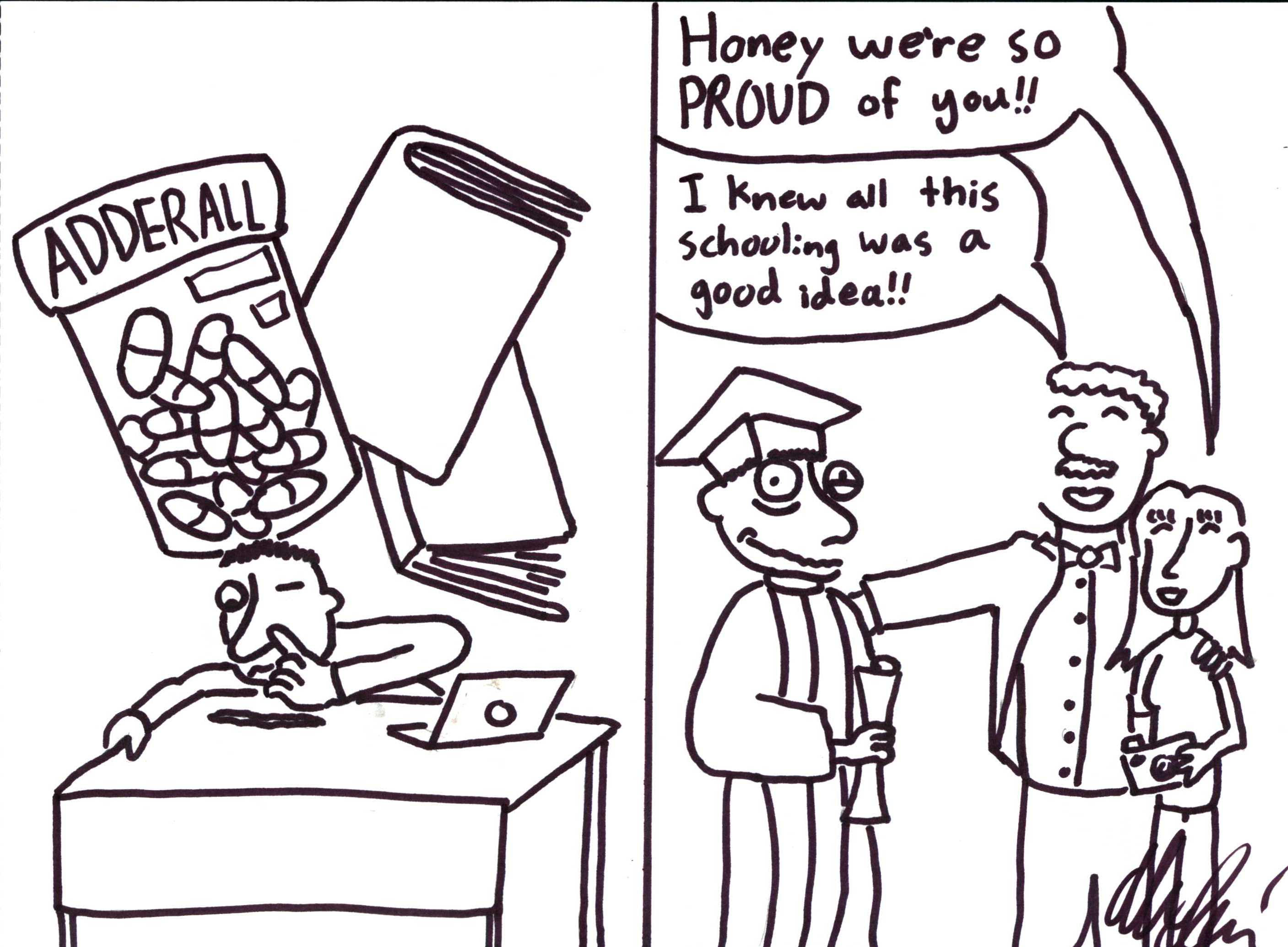 As the semester comes to a close and the sun forbids daytime studying, a few, or perhaps many, students will be found intently staring at screens or pages into the wee hours of the morning. Alternatively, they might have worked intently for a few hours in the evening, accomplishing their work at a rate unimaginable to those of us who have phones and music and daydreams to manage. What do these students have in common? Perhaps they are devoted to their craft? Or maybe, it’s the Adderall.

Adderall’s history is an essay in itself, a story tied to wars, intense social stigma, and most recently, the ingenious skirting of this stigma by a billion-dollar pharmaceutical industry. The active compound in the drug, also in Vyvanse and Ritalin, is an amphetamine. First synthesized in 1887, the amphetamines Benzedrine and Dexedrine were dispensed by the handful to soldiers in World War II. At home, amphetamines in the form of speed or meth were quickly and correctly associated with addiction. How did Shire Pharmaceuticals convince the public to give their kids speed? A patent and a name. By attaching the active amphetamines to a variety of salts and blending closely related isomers, the company was able to register a patent and avoid association with addiction and degeneracy.

To Shire’s credit, there are slight differences between the amphetamines in Adderall and those in speed. Where the latter is composed exclusively of the left-hand L isomer of amphetamine, Adderall is roughly 25 percent L isomer and 75 percent D isomer. The former is known for its rush of euphoria, while the predominance of the D isomer in Adderall lends the drug its ability to promote long-term focus. Not to be confused with the left and right-hand isomers of methamphetamine, the right-hand D isomer of amphetamine has been recognized for its performance enhancing qualities and has been available either over-the-counter or by prescription since 1937. Due to this presence and a near complete acceptance of the drug among veterans of WWII, Adderall’s potential for addiction as a dopamine stimulant has gone largely unnoticed.

Attached to the trust-inspiring name “Adderall” (ADD for all), amphetamine use has skyrocketed in the US. Yearly congressional hikes in the industrial quota for amphetamine sent production from 417 kilograms per year in 1990 to 25,300 kilograms per year in 2012. I won’t bother to calculate the percentage on that one. Suffice to say, either the nation is in the grip of an ADD/ADHD epidemic, or Adderall is being used by more than those seriously afflicted.

One explanation for the burgeoning use of stimulants to aid attention is the nature of the disorder they are prescribed to address. While necessitating that symptoms interfere with daily function, according to Merriam Webster, these symptoms need not be “caused by any serious underlying physical or mental disorder.” Therefore, while medically accepted, Adderall use lacks the stigma of any serious disorder.

Stimulants lacking the baggage of a street drug or a mental disorder were indisputably destined for marketing success. At Wesleyan, they have come to fill an important role in the grey area between academic success and counterculture—recreational drug use. While opinions of Adderall’s appropriate use vary drastically, most attempt to bridge the gap between the competitive culture of academia and its antithesis, recreational drug use.

A significant number of students deal with the enigma of drugs that enhance academic performance by differentiating between need and desire. A first-year student who has not used study drugs despite a desire to, quickly required clarification on whether or not our interview was “just for people who are taking it who aren’t diagnosed because that’s a whole different ball game.”

To a junior who uses her prescription of Vyvanse “only when I really have to write a paper,” the drug’s value lies in how it makes her feel about school. After taking a Vyvanse, not at night or when she has class, she says “I’d rather be in the library than in my bed.” Despite having been diagnosed at an early age with ADHD and consequently receiving a prescription, they see themselves in the middle of a spectrum between diagnosed users and users who do it so simply to up their game. This perception of study-drugs contradicts the medical binary of either suffering or not suffering ADD/ADHD. To them, the use of Adderall and other study drugs raises “a huge question—what is [the difference between] using a drug for academic versus recreational purposes. Because the two really get blurred at a certain point.”

What do these and all relationships with study drugs have in common? A fascination with the potential of a drug to enhance performance in an arena traditionally antithetical to such illicit consumption. Clearly endorsed by the politics of the day and producing commendable academic results, Adderall and other study drugs are disassociated with the addiction and social failure typically attributed to amphetamines. Resistance is therefore based on its unnaturalness and unfairness for those who do not “need” it or who are undiagnosed. To many, however, the end justifies the means. When school and society so clearly value academic success, why would they condemn a pill that provides it? Furthermore, by taking an illicit drug, students can both protest the system and play its game. Claims to both academic prestige and counterculture? Sounds like Wesleyan. At an institution embodying both elitism and counterculture, it seems safe to assume that the use of study drugs will continue to thrive.

Marley is a member of the Class of 2021 and can be reached at jmarley@wesleyan.edu.