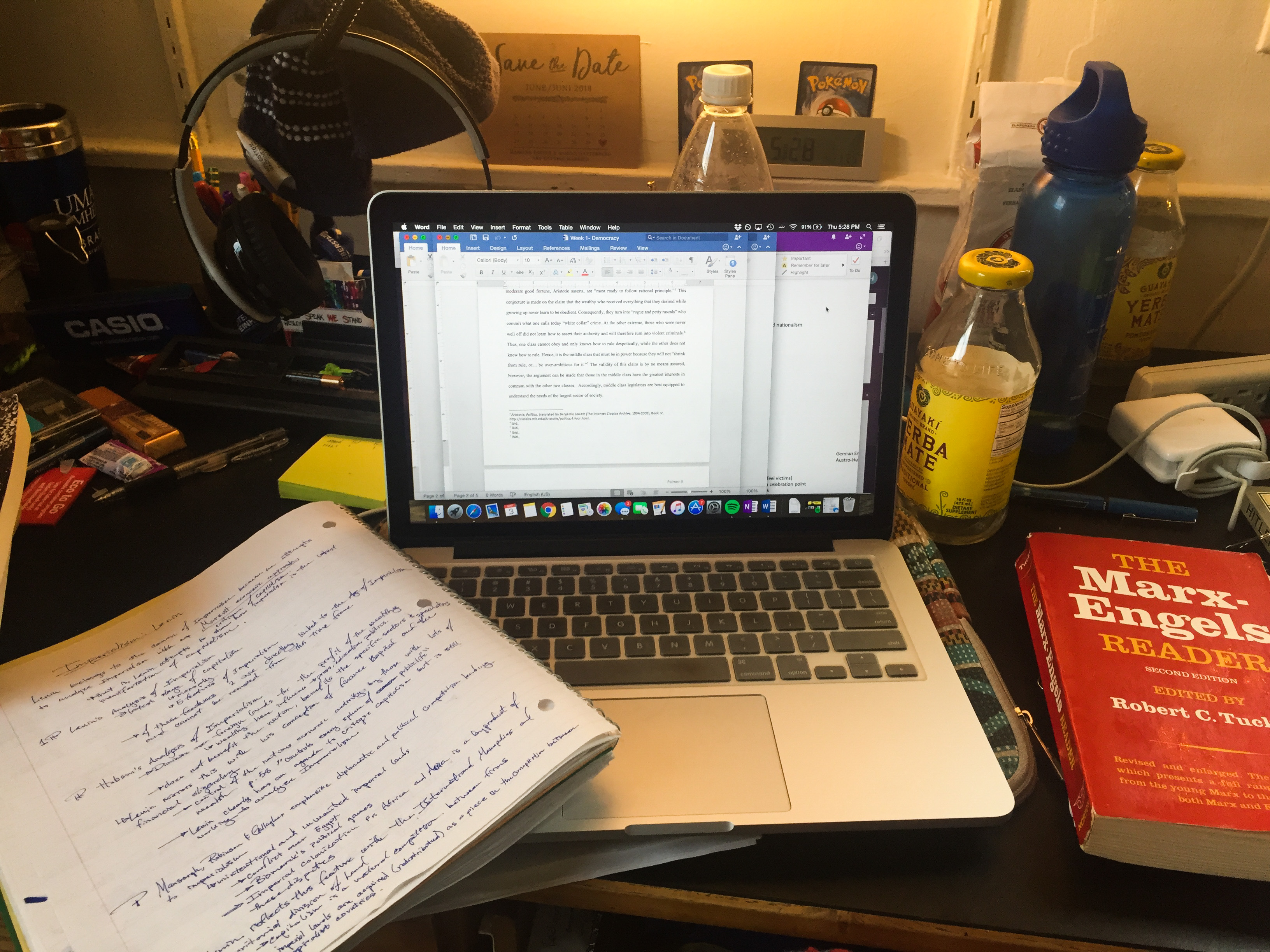 Sophomores in the College of Social Studies (CSS) are currently in the midst of their comprehensive examination period, managing the challenges and excitement of the week. The intensive sophomore year for CSS majors, built around three tutorials and a colloquium, culminates with this weeklong examination period, known as comps, which pushes students to reflect on all the information that they have learned over the course of the year. The examination week is structured around 24-hour blocks of time over the course of a week, during which students are tasked with writing two essays per block of time in either economics, history, social theory, or government. A writing period is followed by a 24-hour break, and then students begin the next set of two essays. Comps are finished when all eight essays are completed.

“Comps is not really that big of a deal, but it’s not like a final that you just take it home and do it,” said CSS major Jamie Herman ’18. “It’s a whole experience where you have it all week and have the intense 24 hours on and 24 hours off, but it definitely connects the class.”

For some, the week is an exhilarating opportunity to test knowledge and consolidate the scattered stressful work completed during the year. For others, the week more closely resembles a kind of hell. Many students say they experience something in between.

“The whole build-up of the year and having the ability to synthesize thousands and thousands of pages of material from the arguments we’ve had for the entire year is really significant to me on a personal level,” said CSS major Finn Collom ’20. “It’s really cool to say that in the beginning of the year there would be no way that I could have been able to do two five-page papers in 24 hours. The ability to do that and see the change in my ability to write and argue has really been impressive.”

Other sophomores have had different experiences.

“I woke up in the morning and thought it was Tuesday,” said Caleb Zakarin ’20 late Thursday night. “It’s just more overall made me more conscious of how time is demarcated and how we break it up in general with days and such. Comps kind of breaks that up briefly and makes you think more about what you can get done in an hour.”

Despite the isolated 24-hour essay writing, the chunks of time in between allow students to commiserate with one another and discuss their essays. Comps serves as a bonding period for the class as they tackle a common challenge.

“During this week there is this anticipation where everyone is super excited to get the papers, and we bond over that waiting experience,” said Herman. “And then you have comps cafe into the night, but besides that, it’s a very lonely experience. So those few moments are really meaningful.”

The experience of CSS sophomores can be similar to those of College of Letters (COL) majors, who undergo a similar comprehensive examination process. Although different in structure and content, as the major combines literature, philosophy, history, and language, the COL comps are similarly intensive. COL students’ comps are taken at the end of their junior year and cover all the material that majors have learned since the beginning of their sophomore year, after declaring the major at the end of their first year. Comps are taken from 9 a.m. to midnight three days back to back, during which each student writes two essays on each day, ending with 36 pages of writing after 72 hours.

College of Letters (COL) major Emily Furnival ’18 shared her own experience with comprehensive exams during her junior year.

“Is it necessary to have trial by fire to bond people?” said Furnival. “Probably not. But I do think that, for a certain type of people who apply to COL and are invested in it, it is a really fulfilling, rigorous, and interesting experience.”

Beyond the bonding quality inherent in the exams’ intense academic pressures, Sonya Bessalel ’18 emphasized that taking comps—and the COL colloquia in general—develops individual and peer-to-peer textual interpretation rather than professor-led thought.

“Knowing that you’re going to revisit them changes the way you read texts,” Bessalel said.

COL majors foster their analytical skills during their twice-weekly colloquia, in addition to out-of-class discussion in the COL library with professors and their peers.

“Everyday discussion in colloquium is the best assessment of students,” said COL major Ben Sarraille ’19. “COL is very much about breaking down grades, and about focusing on critique and focusing on actual, substantial comments, but at some point you do have to have some manner of grading…. [Comps] is, in some ways, a way of showing to outside professors that we take this seriously here.”

The two majors create a camaraderie among their suffering students, and comps provide an opportunity for students to share the writing abilities that they have nurtured and to reflect on what they’ve learned.

“It’s weirdly, at times, almost, very nearly fun,” Saraille said. “It’s not a Rocky montage. At the end of the run, you’re not on top of the steps. Your arms are not over your head. You’re just there.”