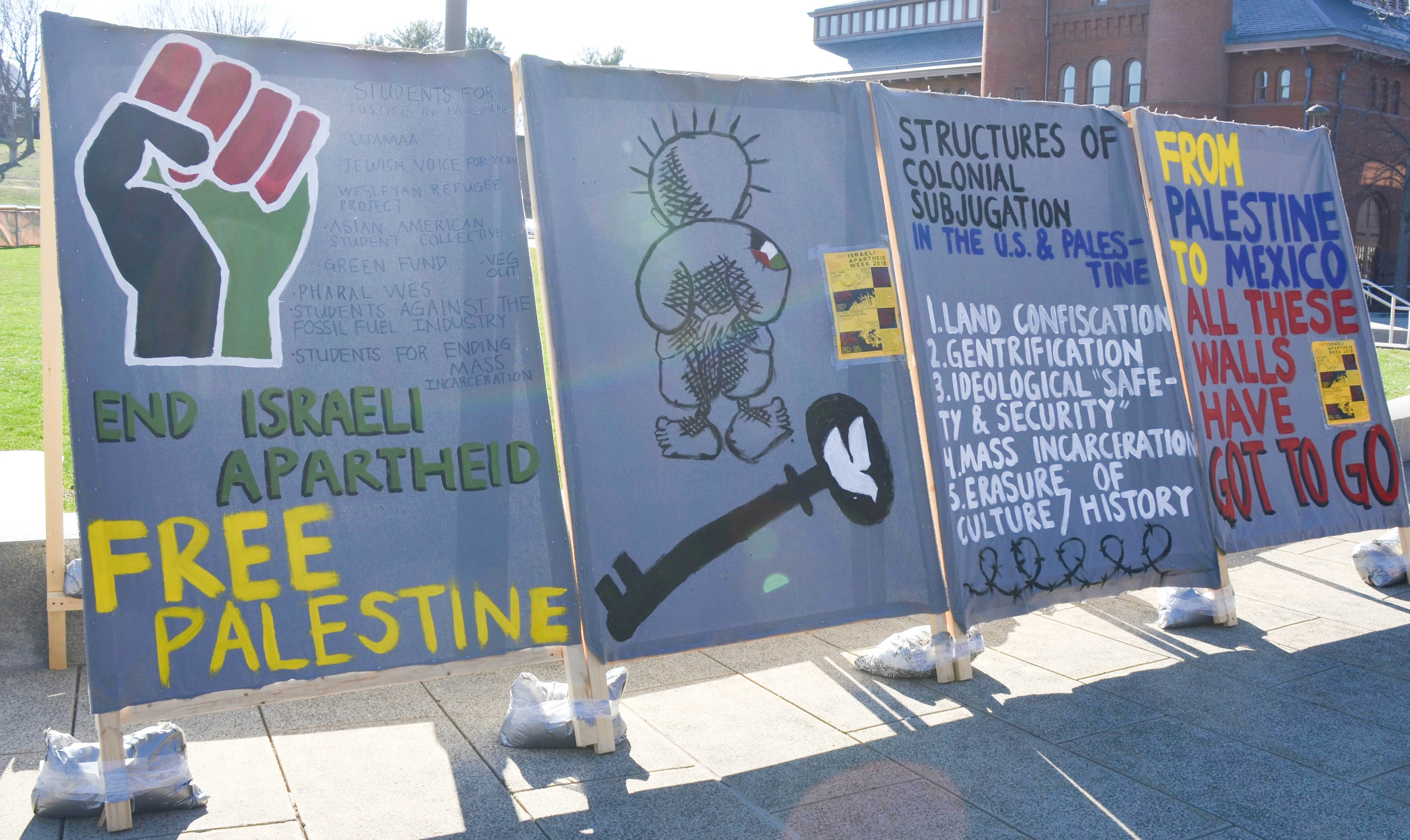 Students for Justice in Palestine and Jewish Voice for Peace are hosting the third annual Israeli Apartheid Week from Monday, April 23, to Friday, April 27.

Sponsored by the Resource Center and the American Studies Department, the events will range from a screening of “On This Land,” to a conversation with Rana B., a history and Modern Arab Studies Professor at Birzeit University in occupied Palestine.

The first event, a screening of the documentary “On This Land” followed by a Q&A session with filmmakers Nitasha Dhillon and Amin Husain, took place on Monday, April 23, in the Powell Family Cinema. The film is a work-in-progress, feature-length, creative documentary that takes the viewer on a journey to Palestine.

“‘On This Land’ weaves together the Palestinian landscape with a multitude of voices from the Occupied Territories in order to understand Israeli domination and look with the Palestinians at the future of struggle,” the Facebook page for Wesleyan Students for Justice in Palestine reads.

On the following day, Director and Senior Scholar of Arab and Muslim Ethnicities and Diasporas Studies at San Francisco State University Dr. Rabab Abdulhadi will lead a talk entitled “Teaching Palestine: Pedagogical Praxis and the Indivisibility of Justice,” in Judd 116 at 4:30 p.m.

“[Dr. Rabab Abdulhadi] will discuss justice-centered knowledge production in Palestine scholarship, pedagogy and advocacy and the two international conferences she co-organized with Palestinian universities that brought together participants from Indigenous communities, third world, and communities of color from the U.S., South Africa, Puerto Rico, Haiti, Chile, Vietnam to Palestine,” the event poster states.

The third event, “A Civil Offense? Criminalizing BDS,” will take place on Wednesday, April 25, in Downey 113 at 4:30 p.m. J. Kēhaulani Kauanui, a University professor of American Studies and Anthropology and Advisory Board Member of the U.S. Campaign for the Academic and Cultural Boycott of Israel, will host the discussion, focusing on the politics of punishment and political repression.

“The talk will discuss campus life under occupation, and give insight as to how university campus movements can stand in solidarity with and support students of Palestine,” the event poster reads.

Director of the Equity and Inclusion Resource Center Demetrius J. Colvin urges the community to recognize how the issues surrounding Israel and Palestine stem from the fallout of colonization.

“For me—and once again, this is my first week as a co-sponsor for this event—some of the things that are always on my mind whenever I’m supporting events like these, is ‘how do we not just think of this as an ‘other’ thing, or this exotic thing that’s outside of us?’” Colvin said. “Instead of thinking ‘oh, these Israelis and their problems’—don’t get me wrong, there are problems and issues—but we need to see this as a larger impacted pattern that’s been played out and continues to be played out everywhere.”

Going forward, Colvin hopes the week will grow as the Students for Justice in Palestine and Jewish Voice for Peace collaborate with more student groups.

“I would love to continue to support the event as it connects and collaborates with more student organizations to be a part of the event organizing,” Colvin said. “And making some of the connections that we’re not just learning about this ‘other’ or this thing that’s far away from us.”