Motherhood, Race, and Religion Collide in “La Violecion of My PapiYon” 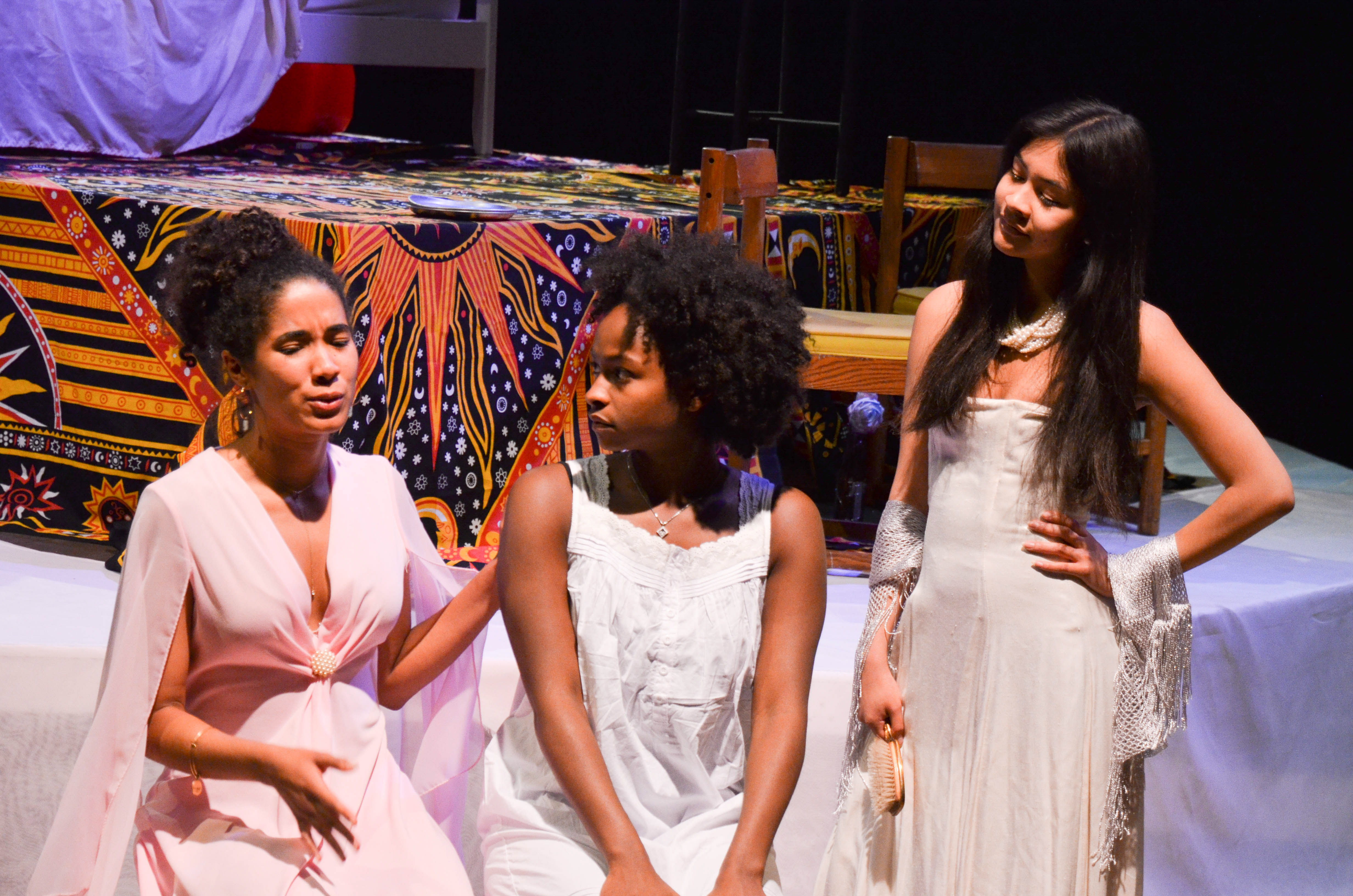 “I didn’t think I could handle being me,” the goddess character told the audience.

This confession is one of many striking phrases interlaced throughout “La Violecion of My PapiYon,” an original play by Arline Pierre-Louis ’19 debuting this weekend in the ’92 Theater. Like the show, the line is a deeply personal admission of shame, but also a freeing revelation in naming the source of internal guilt. It also foreshadows the journey the audience will be taking through this production, one that finds various women characters in the painful process of healing by finally embracing their identities.

“PapiYon” (whose full title translated from Haitian Creole is “The Violation of My Butterfly”) primarily follows Gylda (Inayah Bashir ’20), a Haitian woman navigating a world of motherhood and domesticity in 1988. Gylda is a mother of three: there is her eldest daughter Bellynda (Imani Crews ’21), a one-year-old daughter, and, over the course of the show, Gylda discovers that she will give birth to a son. She struggles with her maternal status, especially upon realizing that her controlling husband Jedidiyah (Jahmir Duran-Abreu ’20) is cheating on her. Luckily she finds solace in the sexually-confident Angie (Zurich Deleon ’20), whose romantic adventures with both men and women draws the confusion of her long-time boyfriend Deacon (Pablo Wickham ’21).

Gylda and Angie’s friendship allows the show to explore the complicated intersections of race, gender, and sexuality. While Angie is comfortable within her own body, Gylda is quick to point out that her comfort derives from the privilege of her light skin as opposed to her own dark skin. Angie questions Gylda’s allegiance to her husband, despite the way that Jedidiyah is treating her.

“You’re not a slave,” Angie states to Gylda. “So why are you acting like one?”

In such potent moments as this, the effects of colonialism and slavery on Haiti’s history become impossible to separate from personal struggles. Bellynda becomes obsessed with straightening her hair, a shame passed on from her father’s side of the family. Gylda even states that the arrival of children for her mirrors the arrival of the new political order in Haiti; she is unsure if the new world she will soon enter will be freeing or limiting. The final effect is a deeply internalized shame on Haitian women’s bodies, especially when perpetrated by the people who seemingly love them: their husbands. 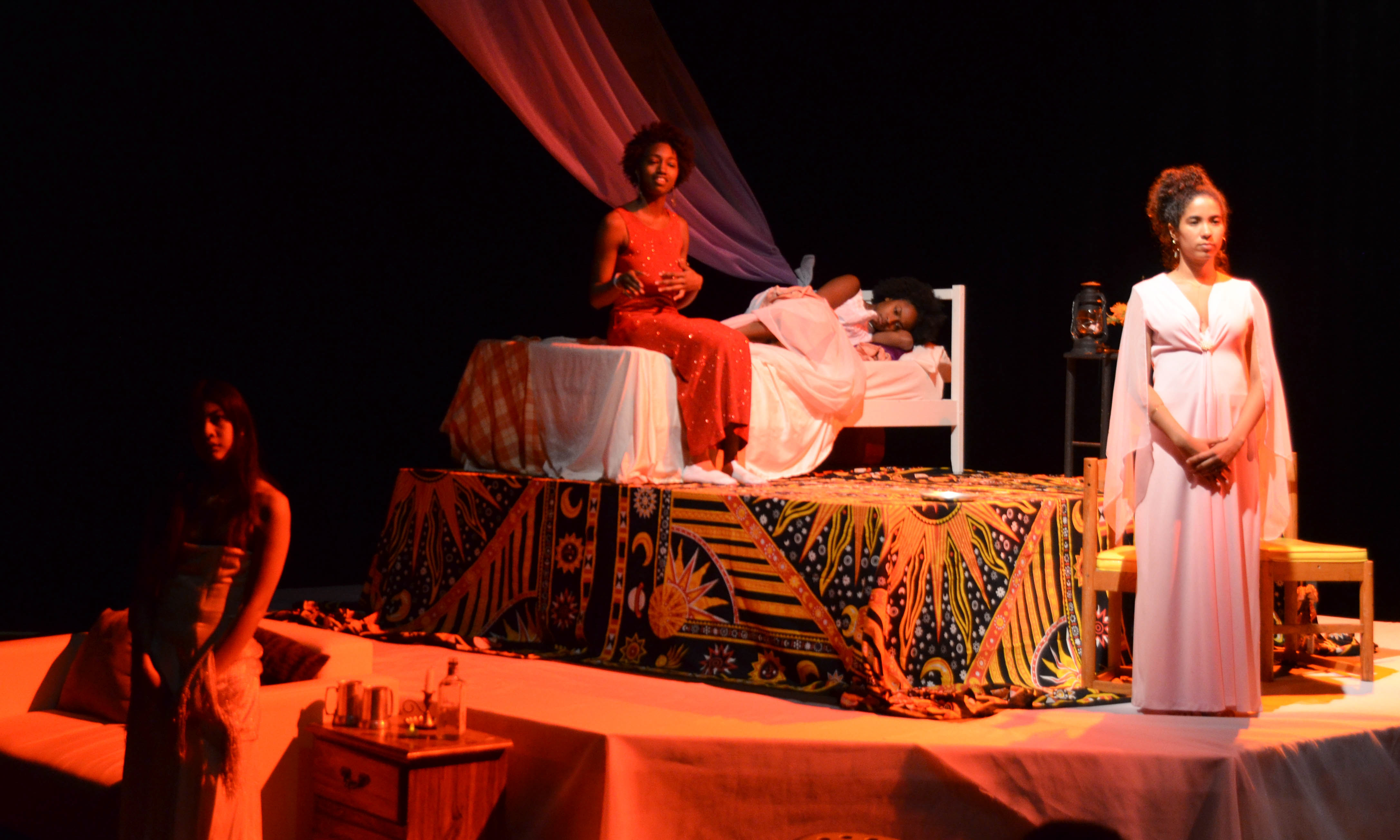 The ensemble does a great job of capturing the spirit of the play, combining both a celebration of a Black experience and an internal reflection on its struggles. As Gylda, Bashir makes her defense of Jedidiyah’s abusive actions strangely believable, and is able to form motherly and sisterly bonds with her other actors. As Angie, Deleon cracks abrasive jokes so quickly and without restraint that it forces characters to open up and demands audience engagement. Lastly, Duran-Abreu as Jedidiyah and Wickman as Deacon both confidently portray versions of masculinity that are as sadly endearing as they are frightening.

The play is interspersed with songs and poetry, which offer a nearly Greek-chorus element to the show, pushing the narrative’s themes into more mysterious, lyrical forms. A trio of goddesses from the Vodou and Santeria traditions (portrayed by Kai Williams ’20, Naomi Williams ’19, and Franchesca Peña ’18) speak in heightened language that echoes poet Warsan Shire, in that it also uses modern slang to discuss oppression’s effects on the female body. There are performances by musicians, dancers clad in white (using Haitian-inspired choreography by Tyler Clarke ’18), and most memorably, a gospel rendition of “This Little Light of Mine.” The song is followed by a hilarious section of the play led by three Baptist church women (portrayed by Abike Sonubi ’19, Michelle Nivar ’20, and Tiler Wilson ’20) who judgmentally remark on the main characters’ situations.

As much as “PapiYon” seeks to portray a specific part of Haitian life, it’s clear from these musical sections that the show is attempting to draw connections among many experiences of Black identity. At the surface level, in terms of set design, African prints line the stage. With respect to costumes, having one of the Baptist women be a man dressed in drag connects to the church scene to the American South as well as to a queer sensibility. Additionally, one of the Vodou goddesses wears a sparkly red dress, recalling outfits worn by The Supremes. Together, these aesthetics combine to create a theatrical world that is both flexible and tangible, a space both recognizable and universal across identities.

The grounded reality that the show inhabits seems directly related to the sense of community from behind the scenes. “PapiYon” is the first major work produced by the Shades Theater Collective, a theater group seeking to promote theater created by and for people of color at the University. The entire cast and creative team is comprised of students of color, and this approach made the play’s own community onstage seem remarkably genuine. Directors Ray Achan ’19 and Ruby Fludzinski ’20 have an eye for creating impressive stage pictures with their large cast, utilizing all levels of the set designed by Adam Munawar Rahman ’20.

The direction is particularly strong when the relationships between the women are highlighted. If there’s one significant criticism for the play, it’s that much of the time these relationships are sidelined to focus on the female character’s troubling relationships with men. The most satisfying parts of the play, both narratively and theatrically, are when the men fade away from the picture entirely.

However, the play’s finale serves as a remarkable achievement in revealing the complex and painful ways in which women find healing through each other and themselves. Like the Vodou traditions that characters enact in the show, this play is a ritualistic coming together to face the struggles of the Haitian woman experience, through both sorrow and joy.

This production also seeks donations for charities that benefit Haitian children and mothers, PapiYon Inc and MamaBaby Haiti. For playwright Pierre-Louis, it didn’t make sense to write a play about Haitian families and not help them.

“I didn’t decide, it always had to happen,” she said.

This charitable aspect of the show extends the themes of the work even further into reality. Just as the characters in the play slowly work to discover themselves and gain pride in their identities, “PapiYon” itself signals the emergence of distinctly new voices in the Wesleyan theater community.