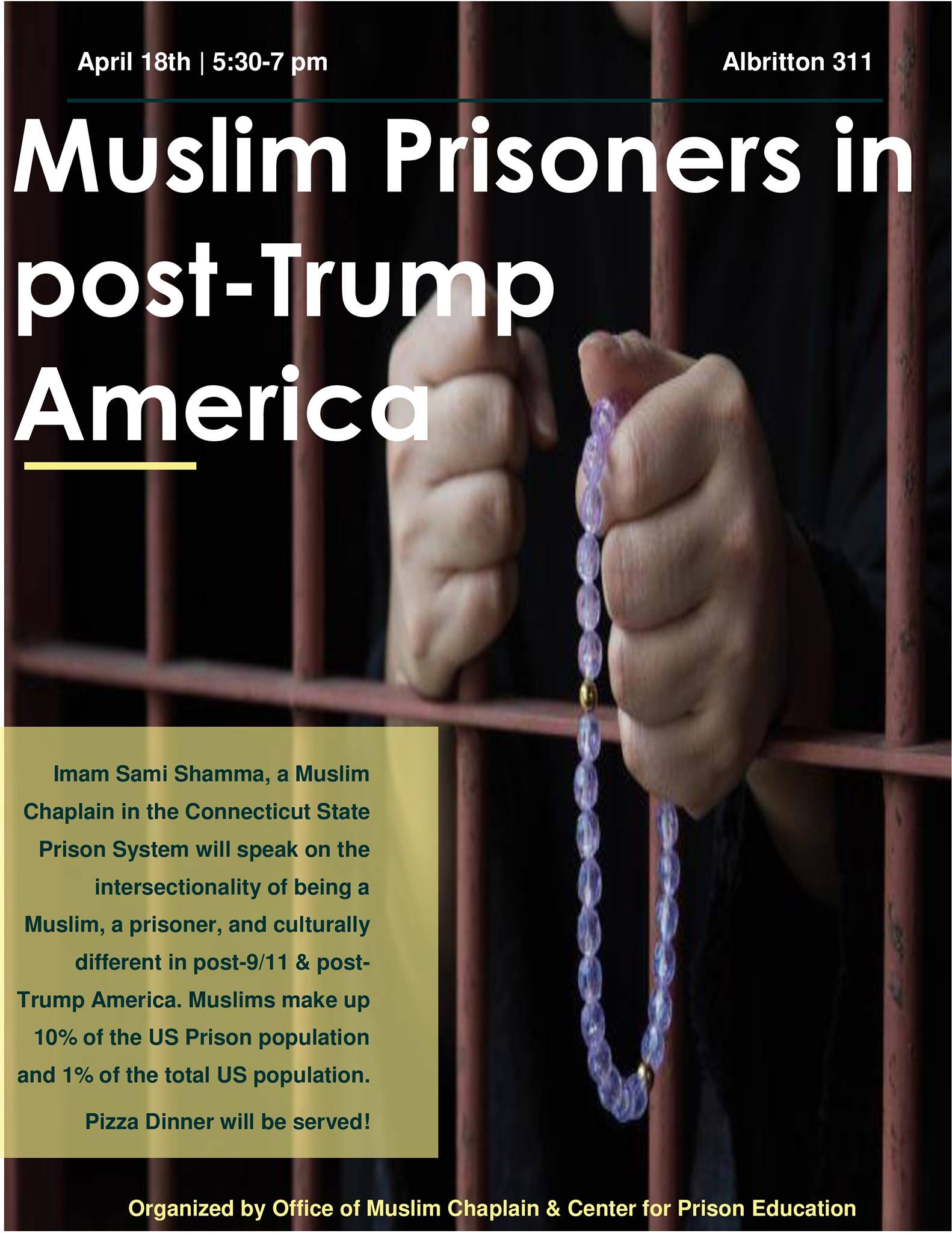 Imam Sami Shamma, a Chaplain in the Connecticut Department of Corrections, hosted a lecture entitled “Muslim Prisoners in Post-Trump America,” on Wednesday, April 18. The talk was organized by the Office of the Muslim Chaplain and the Center for Prison Education (CPE).

“So, this talk is obviously especially pertinent right now in this time of mass incarceration and increasing xenophobia and Islamophobia,” said Program Manager for the Center for Prison Education Noah Barth as he introduced Dr. Shamma. “One of the problems with the prison complex in America is that it’s very opaque; if you do not work there or are not housed there, it is hard to really know or understand how it operates and the complexities involved.”

Shamma began his talk by describing the four topics on which he wanted to focus: Muslims, inmates, 9/11, and the Trump era.

Islam, as Shamma explained, is a religion whose people believe in one God. Muslims, according to Shamma, believe that God sent the prophet Muhammad to share the voice of God through the Quran.

In terms of correctional facilities in Connecticut, there are 14 state prisons and one federal prison, housing just under 14,000 prisoners in total. Within that population of inmates, 13 percent of all inmates identify as Muslim.

Many of these Muslim inmates form close communities for protection, structure, and access to education.

While correctional officers usually break up prison groups on account of the possibility of gang formation, Muslim groups are allowed to remain together.

“They are grouped, they protect each other, they give each other support, and yet they are not labeled as a gang, which is incredibly fabulous and important,” Shamma said.

Often, other inmates see these safe Muslim communities and want to join, creating what Shamma labeled four common subgroups within the Islamic prison population. The first group consists of authentic, practicing Muslims that truly believe the words of Islam. The second group contains curious inmates who are intrigued by the Muslim inmates’ lifestyles. Shamma said that many of the inmates that fall within this category usually base their religious affiliations on changing calendars.

“In the Connecticut prison system, an inmate is allowed to change his religion every 90 days,” Shamma said. “Some of them follow the food calendar, because there are good times in the high season to become a Jew, and it’s pretty good to be a Christian around Christmas time.”

The third group within Muslim prison populations seek group protection, while the fourth group is usually made up of gang members who can only convene by attending religious services.

Shamma then transitioned into discussing how Trump’s presidency has affected the Muslim prison population. As hate crimes skyrocketed after the 2016 election, many Muslim inmates and officers faced increasing discrimination. He also described how many African-American prisoners felt a rekindling feeling that the American prison system is, and always will be, stacked against them.

Shamma related these feelings many inmates experienced after Trump’s election to the events that followed 9/11. As Shamma described, on the morning of the attack on the World Trade Center, all Connecticut prisons went on lockdown and all Muslim inmates were segregated. Some remained in isolation for up to three weeks. The inmates were interviewed by the F.B.I., their cells ransacked, and their Qurans confiscated. Facing so much hatred and discrimination, over 60 percent of the registered Muslims changed their religious affiliations on the register.

For the next two years, Shamma couldn’t remember one Muslim inmate being given parole.

“They were told to their faces by the guards that they were going to kill them,” Shamma said.

Shamma then opened the floor to a Q&A session, where audience members asked about the culture of staff members, gender dynamics within Islam, and how Shamma mentally prepares for work every day.

“Imam, how do you prepare yourself before you go into the correctional facility and then decompress when you come out?” an audience member asked.

“My tension drops the minute the doors close behind me as I walk into the prison,” Shamma responded. “And my tension and apprehension goes up the minute I walk out.”