Ray Miao used virtual reality headsets and headphones in her thesis, entitled “8 AM,” to transport its viewer to another world. The contraptions, which hang from the ceiling, create the eerily realistic illusion that one’s physical reality has transformed. The three-dimensional video that the headset displays brings its viewer to a school in China, Miao’s native country, where hundreds of students are doing the morning exercise, a daily routine that Miao participated in for most of her life. But the headset does more than just show you a video—it makes you a participant in the routine. Rows and rows of students extend in every direction, positioning the viewer in such a way that turns them into just another member of the crowd. And as the viewer turns their head, so too does their lens of the virtual reality. 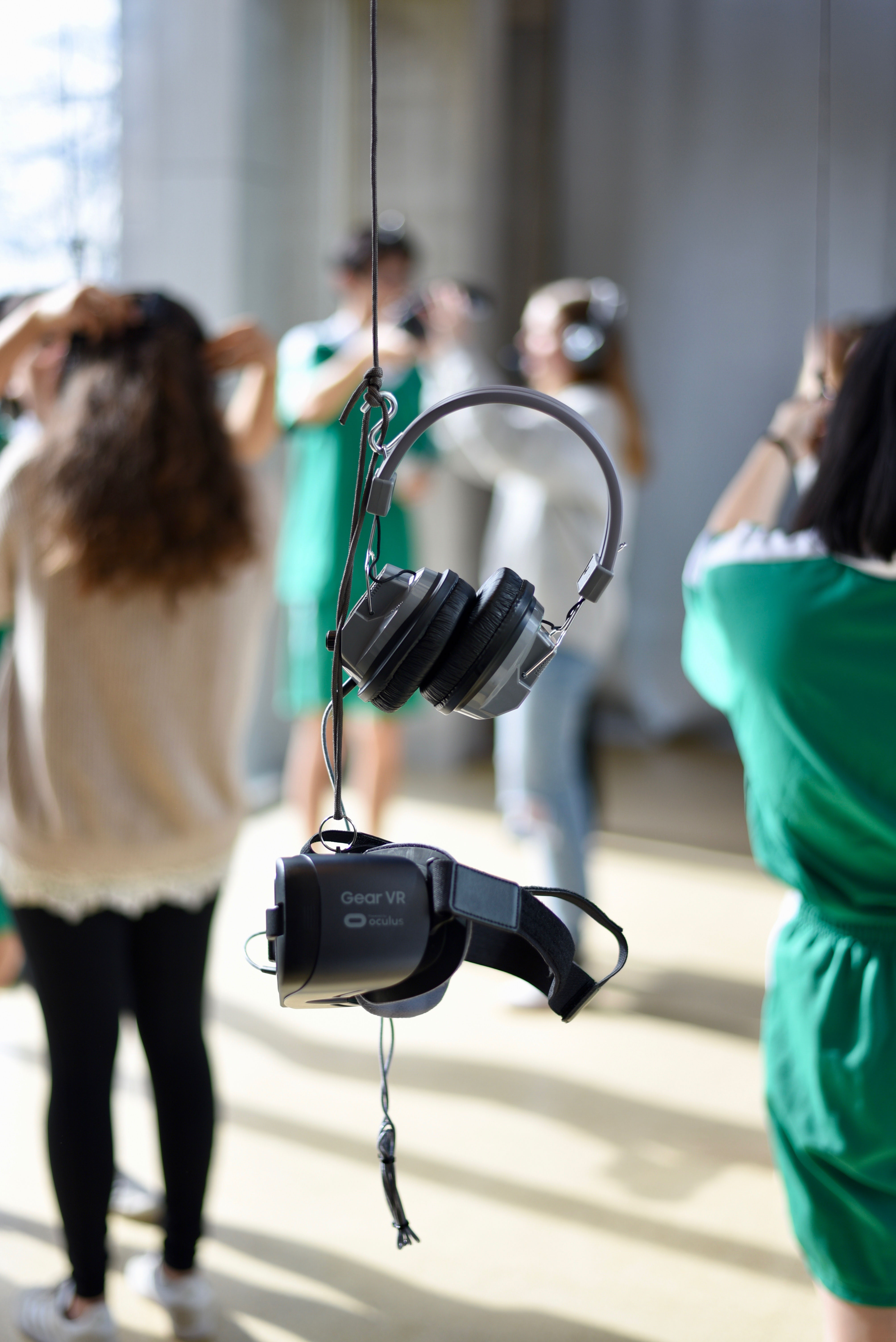 “This image of us doing morning exercise [has always] kind of hung in my mind, because morning exercise is an activity that we did every day, since first grade to senior year of high school,” Miao said. “I think with this medium and this specific content, it’s very effective because VR really separates you from your physical environment. The goal of this technology is to bring you to another world and as an international student, there’s always this part of me that I want people to understand…. So I thought of it as a chance to let the people around me, or even strangers, to understand me more and understand my culture more.”

Phoebe Hanzhi Chen’s collection of photographs, “Land of Parapraxis,” is bright and engaging. All of the photos were taken in Middletown, as she wanted the series to capture beauty in the mundane by depicting vivid snapshots of daily life. The photos that include people seem utterly candid, but the still lifes also possess a strangely similar quality. The works seem to turn the viewer into a fly on the wall, enabling them to observe people and scenes that are unaware that they’re being observed.

“‘Parapraxis,’ or unintentional errors in daily speech or action, is a Freudian concept that describes how subdued complex permeates daily experience,” Chen wrote in her artist’s statement. “The project begins by redefining my own relationship with the place I physically occupy [and] offers an alternative perspective into the American suburb by transforming its space into visceral fragments of daily life.”

Sophie Sokolov’s collection of work, named “Gardner, MA,” after her mother’s hometown, boasted a variety of mediums and effectively used the space to lead the viewer through the exhibit. One white wall displayed three pieces, each made from a varied collection of mixed paper, tissue paper, ink, and string, sewn through the paper. The abstract pieces were intricate and compelling, each one raised from the wall through the wrinkled paper, almost mimicking the way fabric falls, with creases and rivets going every which way. 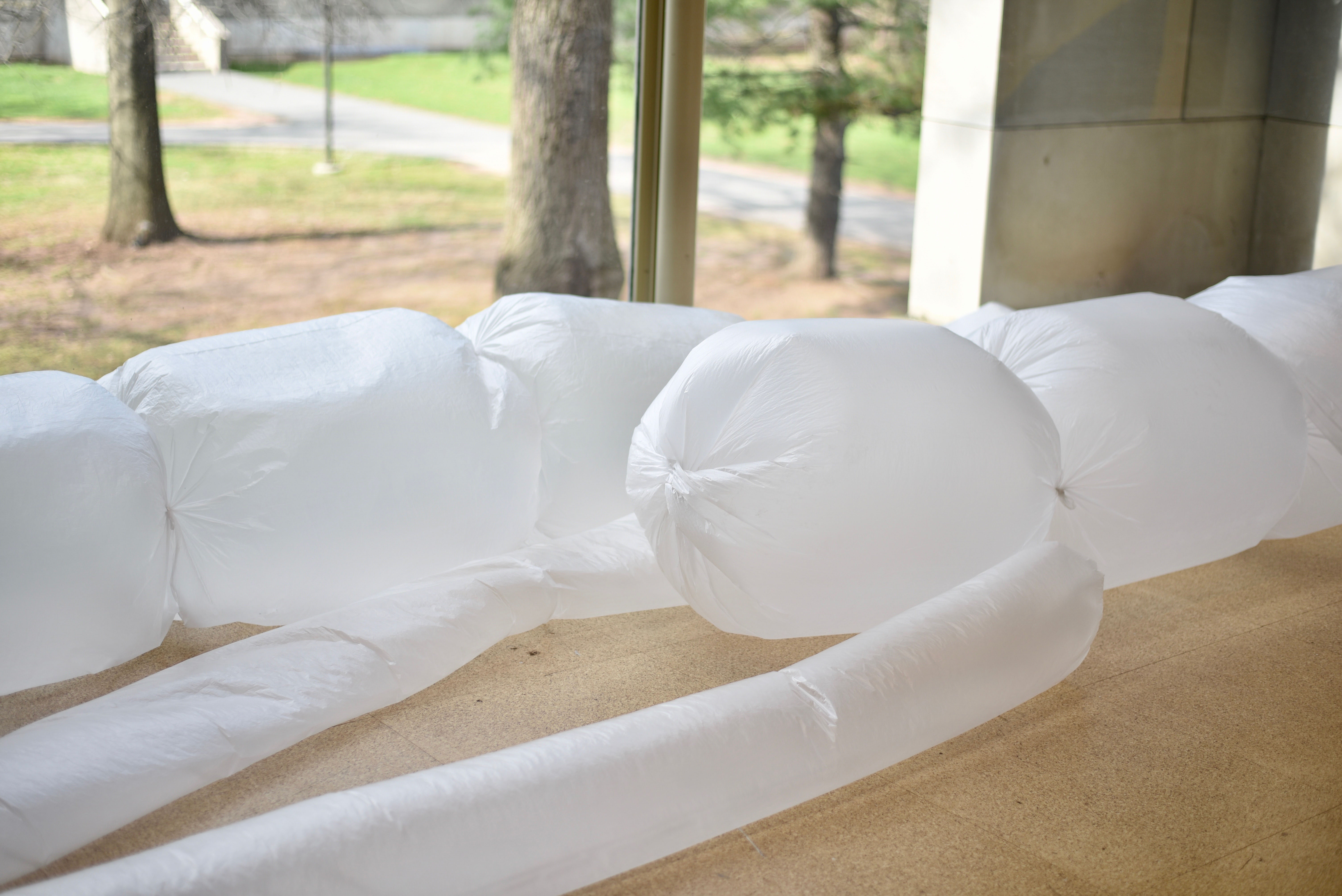 “Proxemic Behavior,” Christina A. Vyzas’ installation, consists of several long, white, see-through cylinders, made from lightweight plastic. Fans are set up to fill the cylinders with air and give them their shape. On the back wall of the exhibit hang four long white plastic sheets, each one being blown forward gently by a fan.

“My installation is specific to Wesleyan’s Zilkha Gallery in playing off the unique architecture of the grand space and endeavoring to bring it to life,” Vyzas told The Argus. “I am hoping that through my work the viewer can feel the walls respire as well as experience a life cycle of birth, growth, and death as they explore the space around them. The limestone’s repetitive form is mimicked in the horizontal, appendage-like floor pieces and the solid walls are softened in color and form by the vertical, large-scale wall pieces. In harnessing the unseen force of wind, I explored the motion that makes form bodily and orchestrated a sculptural experience as opposed to an art object. I enjoyed using mainly household objects and drawing attention to a material not often associated with bodily motion or serenity.”

“fill in the blanks,” Chi Chi Wakabayashi’s architecture thesis, is made of several long and thin dark brown bars, held up horizontally by red strings that hang from the ceiling. A floorboard sits underneath the installation, so one can walk in and around the project to experience the space created by the hanging bars from every angle. 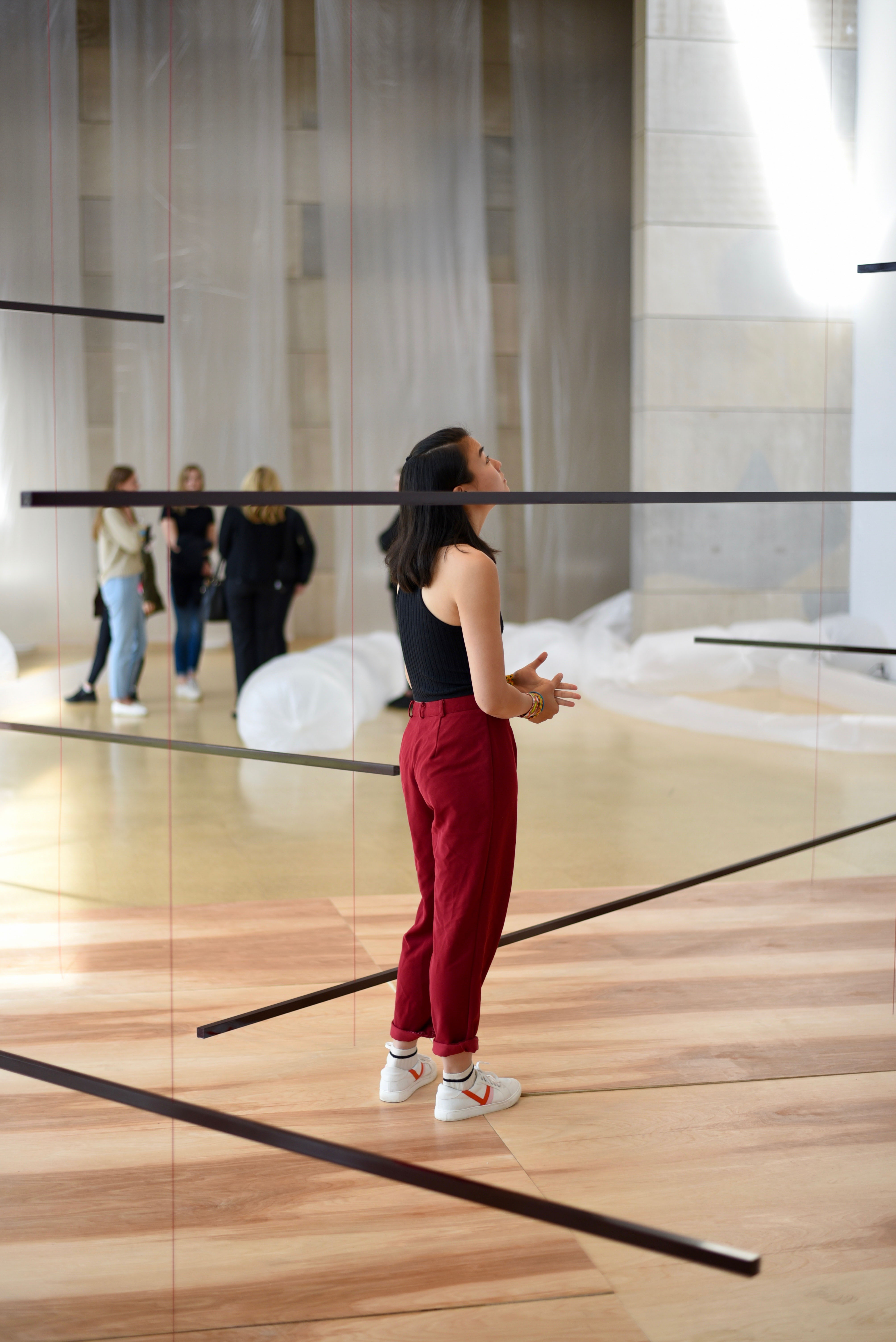 “I’m actually a neuroscience major [so] I knew that I wanted to incorporate neuroscience somehow,” Wakabayashi said of her project’s inspiration. “So I began [by] thinking about boundary perception and how our brains recognize an obstacle…. I wanted to create a project that activated our brains to consciously think about how we move through a space, because usually that is a pretty unconscious thing. I wanted there to be an opposition between how you first view the piece, seeing it as ambiguous, abstract, and without interior, and having that perception of the space change as you realize you can move through it. Once you’ve figured out how to move through the work, your perception of it changes as you realize that it indeed has an interior space.”