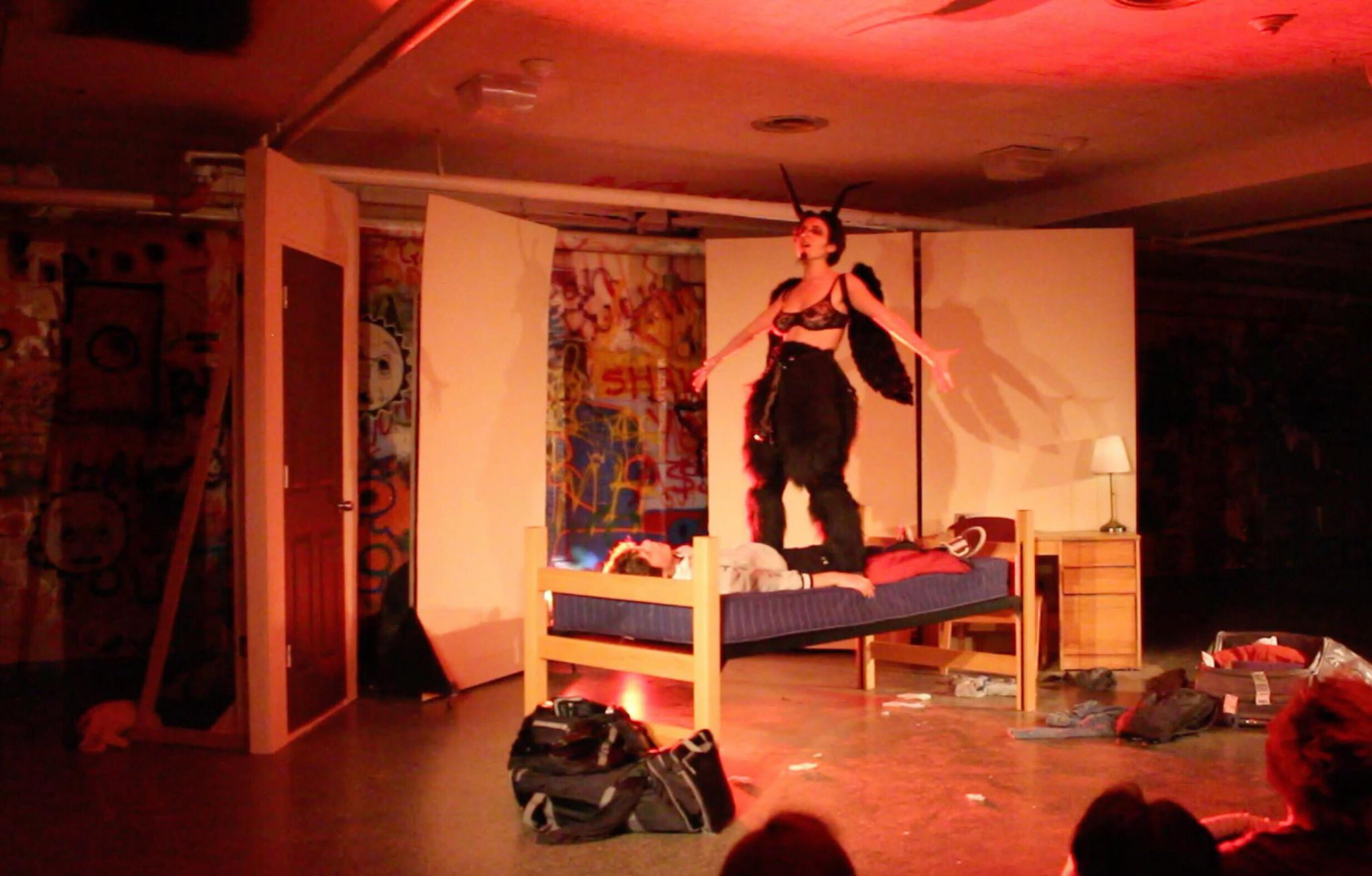 Break-ups, heartache, weed, booze, and seductive goat-demons swirl together in “Goat,” an original play written and directed by Sam Pollak ’21. “Goat,” which debuted last weekend at the WestCo Cafe, follows the story of an expelled and disgraced Harvard student on his rocky road to redemption, giving audiences a glimpse of an authentic college experience in the process.

The play opens on a familiar setting: a classic dorm room. Wrappers and crumpled tissues litter the floor. Several duffle bags lie open around an unmade bed, upon which rests a haphazardly strewn sleeping bag. Clearly the room is barely occupied and is ready to be left behind. Here we meet our protagonist, Mason, who enters with a door slam and a scream.

The initial tone of the play is one of intense emotional distress. Soon after, the play turns comedic with the entrance of Becky, Mason’s quirky and energetic best friend, who exposes why Mason is so upset: He had a terrible breakup, harassed his ex, and drunkenly streaked naked across the Harvard campus, which got him expelled. On top of it all, he curiously begins to be bombarded by stuffed-animal goats. Just as Becky manages to lift Mason’s spirits, the aforementioned ex, Eric, comes into Mason’s room to collect his belongings. The room’s mood becomes icy. There is palpable distance between the two men, and clear desperation for forgiveness and love on Mason’s part. Their conversation leads to a blow-up surrounding Mason’s alcoholism and Eric’s inability to help him. By the time Eric leaves, a great deal of baggage has been aired out, leaving a mixture of anger and tenderness between the two. This exchange leads Mason to pray for the first time in a long time. But it is not Adonai who shows up, it is Baphomet, an androgynous, part-goat sex demon. Through Baphomet’s magical phallus, Mason’s confidence is restored, and he returns to California a renewed man.

Evidently, there’s a lot going on in this play. At its core, though, it is really quite universal. It’s a play about friendship, love, sex, and sanity. Perhaps what’s most interesting about “Goat” is its combination of drama and farce, two genres that rarely intermingle, but rather keep their spots at opposite ends of the theatrical spectrum. We see Mason bare his soul and show us the depths of human pain and heartache. Soon after, however, he and Becky are bursting into a silly, hilarious dance. The show plays with the edges of extremes, almost pushing over the edge of absurdity, yet somehow keeping a sense of realism and relatability. While Mason is visited by a bizarre goat demon and made to orgasm on a penis covered in snakes, he also preserves the style of dialogue familiar to college students. There is an odd marriage of outlandish absurdism and relatable daily struggles. This marriage could easily not work at all, but somehow it does. 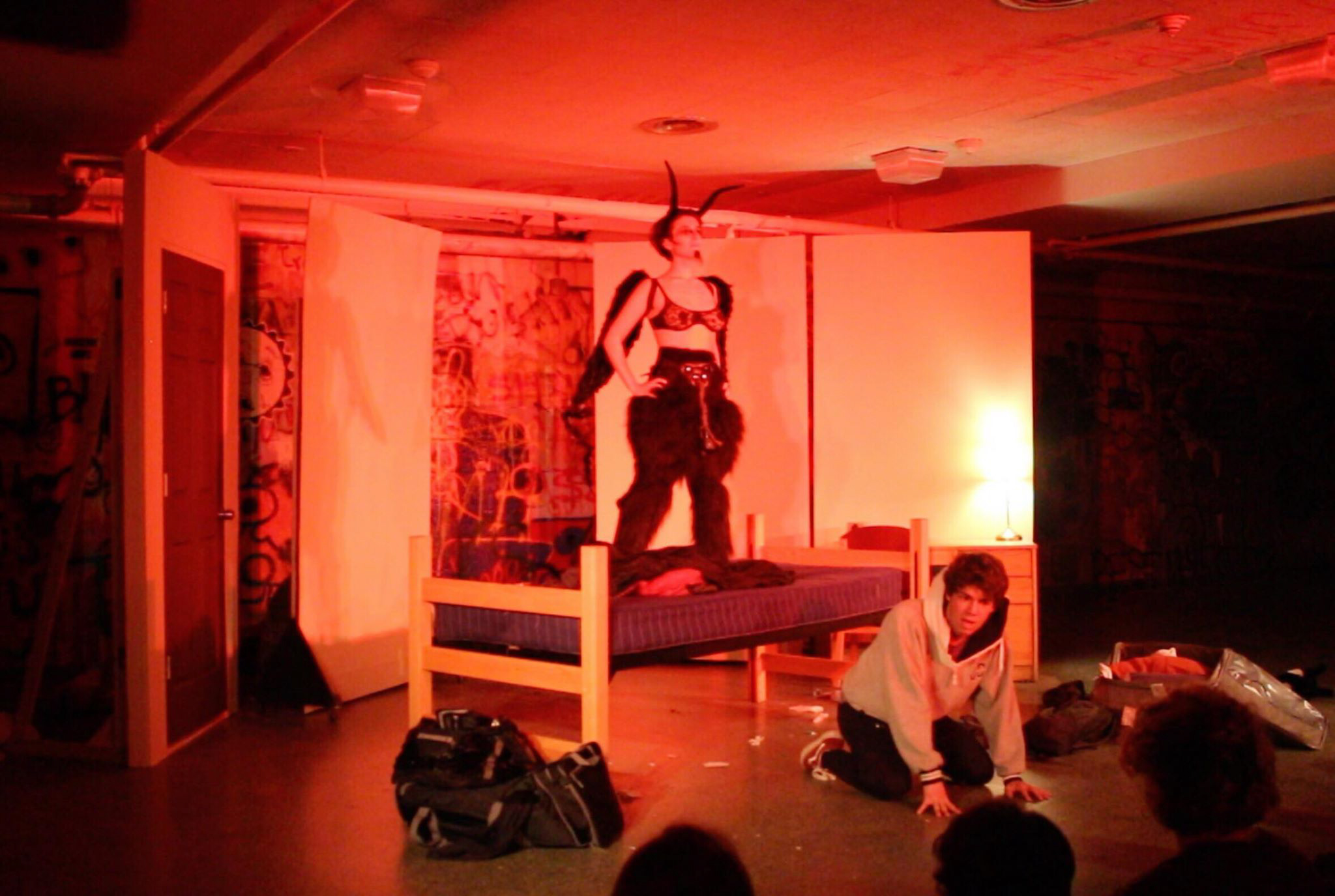 The aspect of this play that I was perhaps most impressed by was the cast, made up of only four actors, each completely convincing in their role. As Mason, Alvaro Chavez ’21 dove into the depths of pain, fear, and heartache, evoking pity and empathy from anyone in the audience who had witnessed a broken heart. However, in other scenes, Chavez’s acting combined with Pollak’s more experimental writing to produce an environment of casual collegiate familiarity. As Becky, Avery Pedell ’21 brought a great deal of humor to Mason’s dark times. Her goofy and creative line delivery coupled with carefree dancing made the audience swell with laughter.

“The actors feed off of the audience, and that is where the humor lies,” said Pollak. “Witnessing the different audience reactions each night was wildly entertaining and also validating for us…having a fresh audience experience the show was the best part of it, and the part that made the story come alive.”

On the other hand, Ryan Dobrin’s ’18 performance as Eric left the audience in eerie and tense silence, as he exposed the real issues with Mason, and bared his own pain from the relationship. This ended up being a challenging but attainable feat for Dobrin.

“It was really hard to play an emotionally heavy role, especially since I only had the one scene,” said Dobrin. “Even though the rest of the play is very comedic, Eric holds a lot of the weight of Mason’s downward spiral. So as long as I could tap into Eric’s truth and understand his role in Mason’s life in that moment, I was able to be in the headspace I needed to be in for the scene.”

And then, there’s the goat demon. Sarina Hahn ’21 somehow kept a straight face while powerfully delivering the lines of the terrifying Baphomet, embodying the true soul (or lack thereof) of the satanic creature. This was a struggle for Hahn.

“The most challenging part for me was figuring out how to best navigate the balance in my character between being flirtatious and also kind of robotic,” she said. “It was a tricky dynamic because Baphomet needs to seduce Mason but also has to maintain a degree of aloofness and quasi-professionalism because the idea is that this kind of seduction is something Baphomet does a lot.”

I was, above all, impressed by how convincing each actor was. While watching the play, I didn’t feel like anyone was playing a part, it felt as if I was watching real people (and a goat) living life. This fascinating combination of real and relatable writing with entirely committed acting impressed me greatly.

“This is a question I have been wondering about myself,” said Pollak.“I’m not sure yet. But one of the first things [Stage Manager Analiese Guettinger ’21] told me after reading the play was that sometime in the future I should write a second act and make it into a full two-act play. So I think that could happen.”

Prepare yourselves for more emotional rides…and many more goats.

Mae Davies can be reached at mdavies@wesleyan.edu