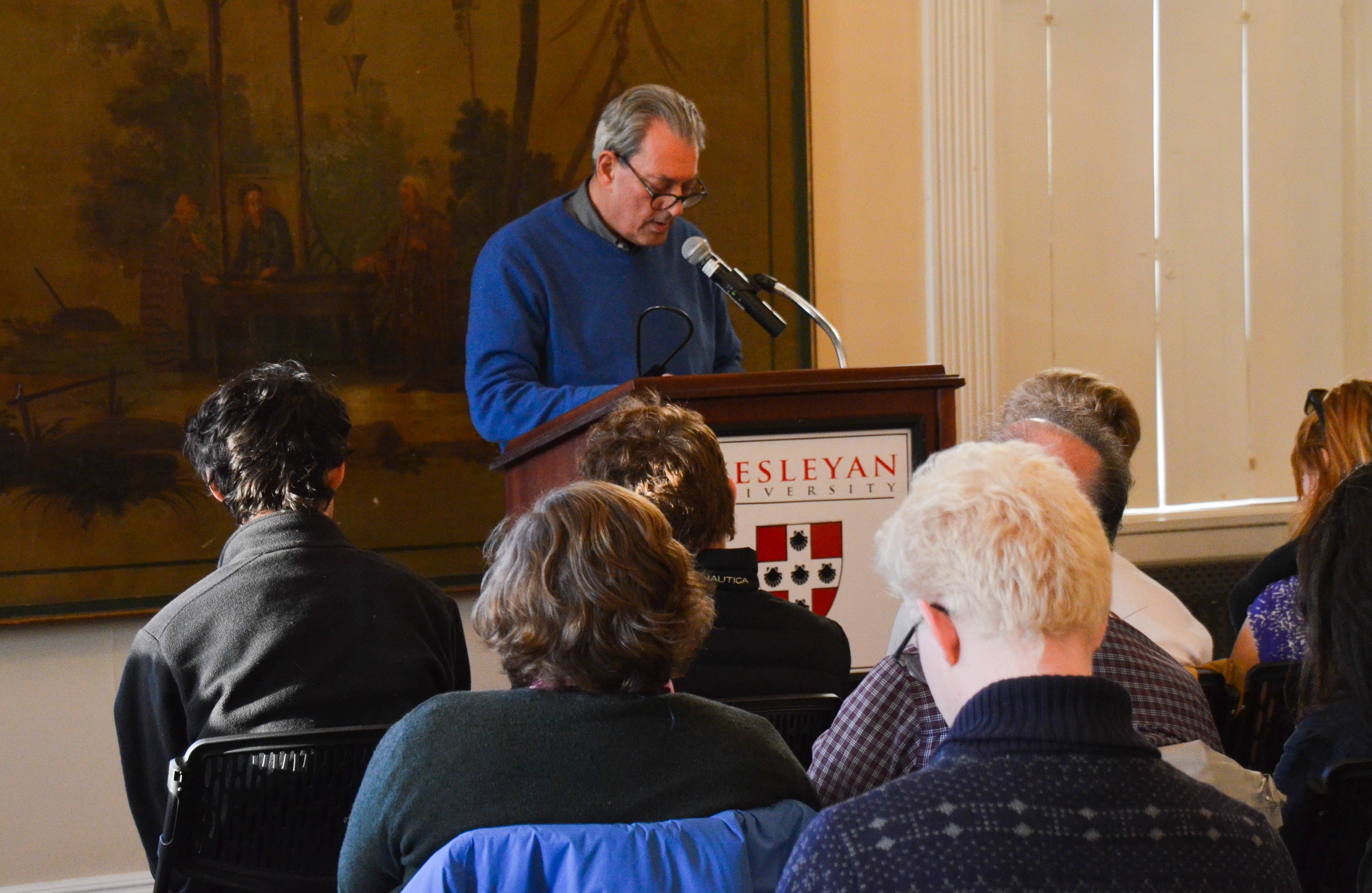 Last Wednesday, Paul Auster was driven up to Middletown from New York. Wesleyan’s 2018 Millett Writing Fellow decided to treat himself to a car service because he figured that he could get some sleep on the ride back to Brooklyn when the Q&A, reading, and dinner with students were all over. After all, he had been up since 6 a.m. working on the manuscript for a new book, a biography on the life of Stephen Crane. Auster explained all of this upon introducing himself to me in the Downey Lounge.

I was fortunate enough to get the chance to take the acclaimed writer out to lunch. After meeting in Downey, we traveled down to Main Street and sat together in Brew Bakers for an hour and a half.

“Back when I was applying to schools, Wesleyan had this reputation that it was a hip place to be,” he recalled with wry enthusiasm between puffs of an electronic cigarette. “Is that still true?”

I said that I liked to think so, after spending almost four years here, and before I knew it, Auster had launched into a story about the University’s firing of his old friend Keith Waldrop of Burning Deck Press decades earlier.

During a class, Waldrop had slowly ripped his doctoral diploma to shreds while explaining some related philosophical concept. When an old guard coot on the faculty caught wind of this avant-garde lecture, the ensuing uproar led to Waldrop getting the ax. Although I had already been told this story before, hearing it from the perspective of a literary hero of mine was something else altogether.

Over the course of our lunch, I asked Auster about his time working as a census-taker in Harlem, and he told me that memories of those early days out of college were the spark that led to “City of Glass,” the first book of the lauded New York Trilogy.

For those unfamiliar with Auster’s work, his writing is often defined by a lack of boundaries, with respect to both narrative voice and genre. In over 50 years of writing, he has authored more than 30 genre-bending works, including novels, memoirs, short stories, essays, poetry collections, and screenplays, which have collectively garnered far more awards than can be listed in full here. While often pegged as an absurdist writer, Auster has repeatedly rejected this label, and virtually all others, insisting that an individual story should be defined by its contents rather than outside elements, such as industry standards or reviewers trying to coin a new term.

We talked about his most recent work, 2017’s “4 3 2 1,” a 900-page novel that tells four potential lives of the same person growing up during the ’60s. The book was shortlisted for the Man Booker Prize.

“Usually it comes from me having some kind of buzz in my head, some little fleeting image of a character or a situation or a place,” Auster said of the origins of his newest work over lunch. “For me, the form has always been determined by the needs of the material, but in this case, it was the reverse: four, parallel, possible versions of a life. Within an hour, I knew who the person was and it must mean that it was already there, but I hadn’t known it yet. With this book I felt I was dancing, there’s this great whirl and I was in it and I was able to express it. I started writing blindly, thinking that I would take them fairly deep into their lives, but by the time I had written 20 or 30 or 40 pages I just said, ‘no.’ This is a book about human development.”

Auster then explained more of a personal context that influenced his crafting of “4 3 2 1.”

“I was 66 when I started writing it,” he said. “Sixty-six was the year my father suddenly dropped dead of a heart attack without ever having been ill in a moment of his life, and I found that turning 66 myself was one of the strangest experiences I’ve ever been through: to be as old and then older than my father had ever gotten to be, as if you’re passing through some invisible curtain, going to the other side where everything is weird, and I was living in the land of weird. I kept thinking to myself: first, that the book is gonna take me six or seven years to write, and second, because my father’s death was very much in my mind, that I was gonna die. The worst possible thing I could imagine was dropping dead before I finished the book, so I think I worked harder on this than I ever had on anything before. I’ve always worked hard, but I was a maniac.”

The estimated six-year project, in the end, took closer to three and a half years to write, and when I asked whether or not his anxieties fed into the character development of Archie Ferguson, the book’s protagonist, Auster responded that interpretation is not his responsibility as the author.

Auster’s unique style is best summed up in an anecdote that Assistant Professor of English Hirsh Sawhney shared during introductory remarks at Auster’s reading later that same evening.

“Earlier this week I was teaching a class on the writings of Paul Auster, a class which inevitably dealt with the thin line that exists between fiction and nonfiction, between reality and story,” Sawhney said. “While I was teaching, my phone started to buzz. I looked down at the screen which informed me that Paul Auster was calling. For a brief flash, it seemed that I had unwittingly become a character in one of Paul Auster’s novels. In these books, writers and characters tend to crash through the wall that is supposed to separate art from reality.”

Toward the end of our lunch, I had one last question for Auster.

“As an aspiring writer who’s about to graduate, do you have any advice for me?” I asked.

“It depends on what kind of writer you’re talking,” he replied. “You have talked to me about journalism and fiction. If you could have your choice ten years from now, what would you like to see yourself doing?”

“Well, I would love to be writing novels,” I decided after a while of tiptoeing around a definite answer.

“You would love to be writing novels,” he collected his thoughts. “Ok, then I have nothing but stern words for you. Young people who tell me that they want to be poets or fiction writers and my immediate response is to say, ‘Don’t do it.’ Do it if you want a life of no money, no recognition, a life of solitary endeavor. That’s pretty much the prospect in front of you. Of course, if someone is really determined to do it then they’ll laugh at my response and say, ‘Well. I disagree, I’m doing it.’ And I’ll say, ‘Okay, fine, do it,’ but I think the thing you have to understand about it is, unless you’re one of the ones anointed by the gods, and this happens maybe once every 50 years to one or two people, you’re going to be rejected a lot.”

“And you’re going to be disappointed, and the important thing is not to become bitter, and not to feel rancorous on people who don’t understand your work or don’t appreciate it,” he continued. “Because you have to keep telling yourself this: No one is asking me to do this. I’m doing it because I’ve chosen to do it. Whether I succeed or fail in the eyes of the world is less important than the fact that I’m doing what I chose to do, and if it’s any good, there’s a chance that someday someone else will see that it’s good too. More than that, you shouldn’t have any expectations and if you do, you’re in for disappointment.”

“Well,” I replied after a long pause. “What would you say if I had said that I wanted to be a journalist?”

“Ok, a journalist, now I have a completely different response,” he said. “Journalism to me can be can be a heroic calling in a time like the one we’re living in, an essential calling, so fundamental to the survival of the human race that we need the good ones, the ones that will actually pursue stories and get down to the bottom of things and tell us what’s going on. Because if we don’t have that, we won’t have democracies, we can’t have functioning countries. Journalists are at risk all over the world now, not just because their papers are being shut down, but because they’re being murdered or thrown into prison.”

This viewpoint is nothing new for those familiar with Auster’s public remarks in the past. In 2012, in a controversial move, Auster had decided against a promotional tour in Turkey, protesting the country’s treatment of journalists critical of Recep Tayyip Erdoğan’s government.

“It’s a dangerous profession if you’re doing it seriously in places that are particularly violent, but it’s worth it,” he concluded. “It’s really worth it. But it’s not art. Writing novels is being an artist, but being a professional journalist is taking on a big responsibility, and I think it carries with it all kinds of inner rewards but it’s very hard work, exhausting work.”

And with that, our conversation was over. I checked my watch, noting that we had better get going or he would be late for his Q&A session. We collected our things and made our way back to campus.