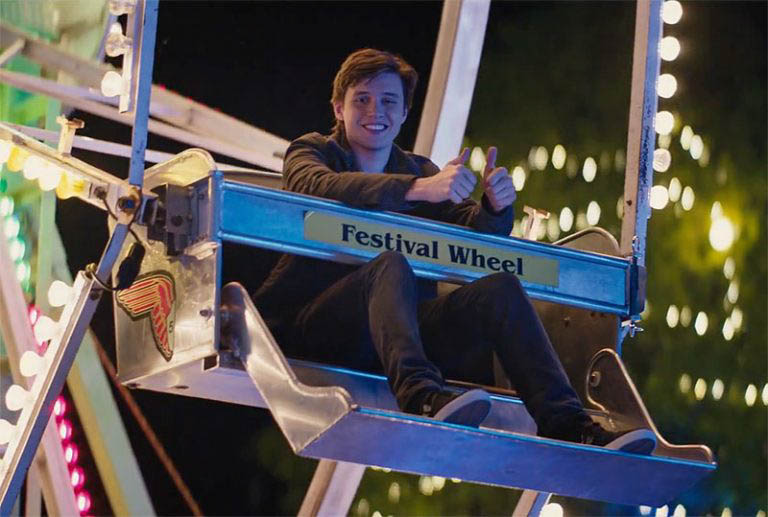 The audience meets Simon Spier through his white, suburban upper-middle class family. There’s the vaguely incompetent and lumberjack-looking dad (Josh Duhamel), the intelligent and organized mom (Jennifer Garner), and the younger sibling with a distinctive personality quirk (Talitha Bateman). “Love, Simon” fulfills all the typical rom-com tropes of teenage movies, but the speeches about being true to yourself and following your heart now have a few teeth to them: Simon’s heart is gay. There are finally believable stakes.

All of the twists and turns that could happen don’t, for better or for worse. The mysterious “Blue,” Simon’s email correspondent, isn’t a trap by high-school bullies to get gay kids to out themselves in a mean-spirited joke. His closest friends are all straight—there’s no “I’m gay” “No way, me too!” moment. “Blue” is someone that Simon still likes in person, despite the film’s ambivalently tech-phobic overtones, which might have foreshadowed a final message about the dangers of online relationships.

And that’s kind of great. The people that love Simon have little to no hesitation about embracing him. Although the film lazily tackles more blatant forms of homophobia when two jocks dress up as Simon and the only other out gay boy, Ethan, at their high school and publicly mime sex, it most successfully addresses the abstract fear of being seen as different. This fear of standing out or being reduced to one’s sexuality is more present in modern-day liberal communities for LGBTQ youth. Simon, more than anything, seems to abstractly fear things changing or being “the gay kid,” although the audience does not see concretely how he imagines his fears will play out.

One crucial scene comes when Simon’s obnoxious classmate who outed him attempts to apologize for what he did. Simon loses it, yelling at his classmate because he had been stripped of his right to come out on his own terms.

There is no durable parallel in rom-coms that feature opposite-sex couples. It’s not that Simon wants to come out, it is that it is his choice to do so. Straight members of the audience don’t necessarily have to understand the moment, except to know that something important has been taken away from him.

The audience is also shown time and time again how hesitant Simon is to be openly gay—the overdone dancing fantasy of how it will be at “Liberal University” shows how unrealistically Simon imagines being out. It seems to be a future that he has barely considered.

His imagined future at “Liberal University” also touches on how Simon himself has taken in little queer representation in media. In his mind, to be proudly gay, he has to have a Barbra Streisand poster on his perfectly decorated wall and dance in front of a rainbow flag at a school that’s, well, probably like Wesleyan. (The film directly plays with his beliefs in a scene where Simon Googles “how to dress like a gay guy” and tries on a bunch of tight T-shirts before seemingly realizing that that isn’t really him.) It’s vaguely self-congratulatory, but the film seems to be telling its audience: Here he is! A gay guy who’s not just the Gay Best Friend!

Occasionally in these very moments, the film strangely veers into homophobic territory. Through Simon’s interactions with Ethan and the eventually revealed “Blue,” it is made clear to the audience that the straight-seeming Simon would not be interested in dating a more effeminate gay man. It’s a notable flaw, and closed-minded for a film that attempts to push the envelope, but also aligns with its attempts to remain in a comfortable neutral territory that would appeal to a broader American audience.

The film has many other flaws, such as when Simon supposedly falls in love after exchanging approximately 12 emails with an anonymous gay teenager at his high school, which is permissible in the suspension of disbelief that the film asks for. There are also several almost desperate attempts to appear relatable to millennial liberal culture—a cringe-y Trump joke worked its way into the script, vinyl records make more than a few appearances, and a “Hamilton” playbill stands out on his wall. But these empty moments do not take away from an overall memorable emotional arc.

The peak of the movie comes when Simon sits with his mother. She taps into the film’s greatest and perhaps most poignant theme: Simon seems less afraid of how everyone else will see him than of how he will see himself as a publicly gay guy. Ostracism is a legitimate fear at his high school, having seen how his gay classmate is bullied and the excessive intrigue in his classmates’ sexuality from his closest friend, Leah (Katherine Langford), but when confrontational moments come, Simon handles them with impeccable but believable grace.

“Love, Simon” is not particularly novel, but it’s an accurate answer to the question, “What if we made all those mediocre, mostly plausible teen rom-coms gay?” And the gayest moments are perhaps the most wonderful.