Hot Takes With Hogan: The Best of the NBA 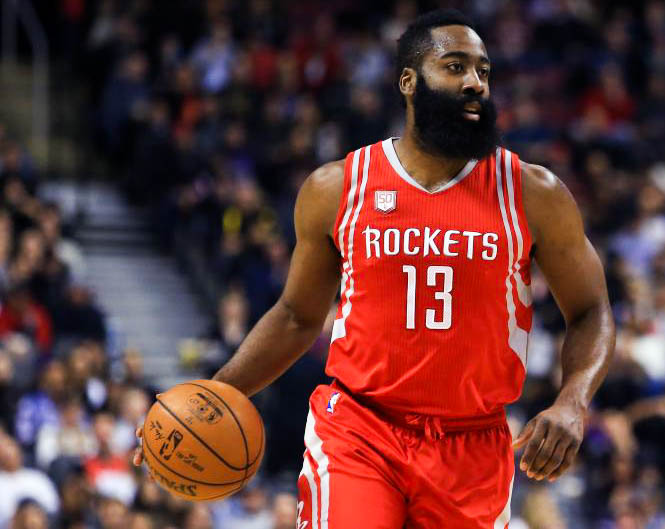 I often find ranking players to be a futile exercise. Are these the best players or the most valuable? Is it for the present or the future? Despite the senselessness, because the NBA playoffs are approaching I have decided to compile my own list. The order that follows is how I see the ten best players in the NBA today. In other words, these are the ten players, in order, that I would want on my side with a playoff game on the line.*

1. LeBron James. In his fifteenth season, it is still LeBron James who claims the league’s throne. The 6’8” behemoth is in the midst of his best offensive season (by almost all measures) as a pro. He is in currently on a two-month tear in which he is averaging over 30 points and nearly 10 rebounds and 10 assists per game. King James is accomplishing impressive feats, becoming the youngest player to score 25,000 career points and the oldest player to score 2,000 points, record 500 rebounds, and 500 assists in a single season. His sustained excellence is a sight to behold and something that surely shouldn’t be taken for granted.

2. James Harden. Harden will win the MVP this season. There really isn’t much debate. In fact, I wouldn’t be shocked if it were unanimous, although LeBron might have something to say about that. The Beard causes all types of problems for opposing defenses: his strength (220 pounds) allows him to bully smaller defenders as he attacks the rim, his speed allows him to maneuver around big men who get switched out onto him, and his craftiness and skill allows him to consistently knock down that patented step back three-pointer over (helpless) defenders draped all over him. Averaging more than 30 points per game, James Harden is an assassin.

3. Steph Curry. The gravity that Steph Curry has is simply unprecedented. The second that he steps over half court, the entire defense is aware of his presence and they react accordingly. While he’s averaging over 26 points per game this season, perhaps Curry’s greatest attribute is the space he opens up for his teammates. When the defense suffocates Steph, it allows his teammates to run free for easy buckets. The most prolific shooter in the history of the sport, Curry cracks my top three.

4. Kevin Durant. KD went toe to toe with LeBron last June in The Finals and got the upper hand. That doesn’t make him the better player, though. Durant is a bona fide scorer. In fact, he might be the most versatile scorer the game has ever seen. Standing 6’10” (he’s really probably closer to 7’2” with an infinite wingspan), Durant can get his shot off anytime he feels like it. Three-pointers, mid-range, and attacking the cup, Durant has it all in his arsenal.

5. Anthony Davis. When DeMarcus Cousins went down, many wrote New Orleans off, but Anthony Davis elevated his game to a level that I didn’t think was possible. The Pelicans’ seven-footer is posting 28 points, 11 rebounds, and 2.5 blocks per game, keeping his team afloat in the Western Conference playoff picture.

6. Damian Lillard. A season ago I’m not so sure that Dame would’ve been included in this list, but he has been utterly spectacular this season. Ever since the calendar turned to 2018, the Blazers’ lead guard has been a man on a mission as he has firmly asserted himself into the MVP conversation. Without him, Portland would likely find themselves deep into the lottery.

7. Russell Westbrook. He just plays so damn hard. Yes, he’s über athletic, but he is also relentless. Whenever you play against Westbrook you know he is going to be out for blood for a full 48 minutes. Oh yeah, and by the way, he is on the verge of his averaging his second consecutive triple-double.

8. Giannis Antetokounmpo. I assume many would have the Greek Freak higher, but I remain a bit skeptical of his effectiveness and efficiency in the present. Granted, a few years from now he very well may be the best player in the NBA; but right now, his jump shot is too inconsistent for my liking. He also often gets tunnel vision; when he drives to the basket, he frequently misses wide open teammates because he is so focused on just getting to the rim. Despite those faults, he is only 23 years old and is leading the Bucks into the postseason while putting up 27 points, 10 rebounds, and five assists each night he takes the court.

9. Joel Embiid. The big man dominates on both ends of the court for Philadelphia. He is their linchpin offensively and their anchor defensively. On the season, he has scored more than 23 points per contest while snaring nearly a dozen boards. Embiid had silenced his “if healthy” critics until the last week in March when he suffered a fluky facial injury. Through that point, the native of Cameroon had played in all but 11 76ers games this season. That’s quite a feat considering that he played in a mere 29 games total his first three years as a professional.

10. Chris Paul. People have been sleeping on the soon to be 33-year -old. CP3 can still hoop. The Rockets secondary ball-handler is averaging a ho-hum 19 points, five rebounds, and eight assists per game for the league’s best team. Yes, he’s getting up there in age, but there aren’t many better, and more competitive, than Chris Paul.

*Note: Kawhi Leonard and DeMarcus Cousins were not considered due to prolonged injuries.