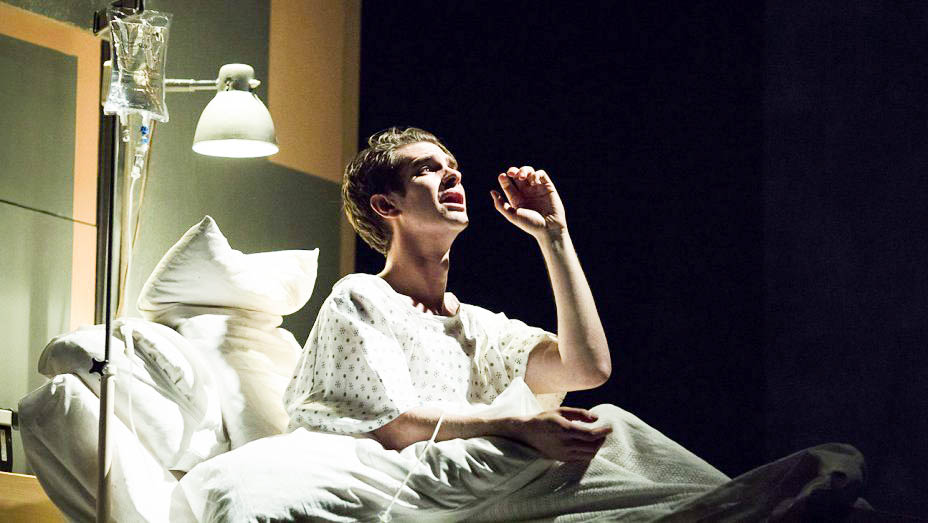 A young woman, Harper, stands alone on a barren stage, the world having collapsed and abandoned her. A snowstorm is falling from the sky, or rather, the theater’s ceiling. The light strikes a mist that turns snowflakes into brilliant shades of reflective blue, purple, and white. She looks up, eyes full of wonder and terror, realizing both the fantasy she’s created for herself and the desperation that’s driving her to madness. This isn’t real. But this world still has the power to heal. It is through Harper’s imagination, borne out of pain, that she can create her own salvation.

This deeply human desire, to turn devastation into a powerful antidote of healing, pulses through the new revival of “Angels in America” on Broadway. Director Marianne Elliott’s staging of the monumental play by Tony Kushner, having transferred from London’s National Theatre and now residing in the Neil Simon Theater, feels not just “important” in the chaotic world of 2018, but absolutely vital. The play elicits nearly every emotion possible, even the ones you don’t enjoy: grief, fear, shock, and the trauma of physical pain. The most commonly felt emotion would probably be exhaustion: although the narrative is split into two distinct plays, “Millennium Approaches” and “Perestroika,” the entire runtime is about seven and half hours. But if you can get past the runtime, “Angels” arrives like a gut-punch. It’s a soaring example of the limitless possibilities of theater and a cathartic exploration of people enduring unthinkable tragedy.

“Angels in America: A Gay Fantasia on National Themes” is a sprawling epic which seeks to re-orient the entirety of American history, both past and present, through the lives of gay men barely surviving the AIDS epidemic that ravaged New York City in the 1980s. Originally on Broadway in 1993, the play tapped into a fractured American political landscape to create a cultural phenomenon that only “Hamilton” has rivaled in terms of critical and commercial success. The play remains a glorious blend of “high” and “low” art, making sweeping statements about American philosophy and religion, told through conversations you could overhear on park benches. It discusses God’s abandonment of humanity but with a campy self-awareness of its more ridiculous elements.

Because of its huge scope and immense cultural impact, it’s easy to exalt “Angels” to the upper echelons of the Western theatrical canon and treat it as a sacred text. But Elliott, who also directed “War Horse” and “The Curious Incident of the Dog in the Night-Time,” understands that the show must work from the perspective of a play with people onstage, not as a political treatise. The cast, even more than the moments of revelatory stagecraft, is what propels the show into its deep reverie on an empathic connection.

With over forty characters portrayed by eight actors, the play features a remarkable cast. Most notable is Nathan Lane as Roy Cohn, the real-life figure who was a notoriously outrageous lawyer, closeted homosexual, and mentor to Donald Trump. Lane’s charismatic stage presence and alluring humor make this deeply troubled man nearly irresistible. When Cohn’s true colors show, especially his deep-seeded hatred and corruption, they emerge with an unbridled anger and desperation that’s startling for those of my generation who know of Cohn only through this play. Lane’s physical transformation, from a mile-a-minute power broker to a helpless AIDS victim, caused many members of the audience to gasp in horror.

The entire cast brings an overflowing energy to their characters. Andrew Garfield anchors the show as Prior, a gay man afflicted with AIDS and receiving cryptic visions from a divine messenger, unabashedly inhabiting the fabulousness of the role. Supporting him is James McArdle as his ex-boyfriend Louis, a Jewish man wrecked with the guilt of abandoning his lover, portrayed with a caustic anxiety. A determined Lee Pace takes over Russell Tovey’s role from the London production as Joe Pitt, a closeted Mormon seeking to reconcile his sexuality with his upbringing, though Pace, unfortunately, lacks some of the indecision and softness that Tovey brought to the character.

The standouts in the ensemble have to be Nathan Stewart-Jarrett as the gay nurse Belize, and Denise Gough as Harper, Joe’s wife, whose Valium addiction leads to fantastic hallucinations like the aforementioned snowstorm. Belize represents an iconic version of Black queerness, but his role in the script as a token person of color and caretaker verges on the uncomfortable. In the hands of Stewart-Jarrett, however, he quickly becomes the beating heart of the show, with an incredible wit and scene-stealing sparring with Lane in numerous scenes. He’s so smart and so comfortable with who he is, you can’t help but smile when he’s onstage.

More divisive than Stewart-Jarret, however, is Gough as Harper. While past actresses have played into Harper’s delusional qualities or dreaminess, Gough’s Harper speaks bluntly, conveying Kushner’s lyrical storytelling as if it were hard fact. While some might find this interpretation cold, the effect is that from the outset Harper appears brimming with emotional intelligence. Gough’s voice grounds Harper into her own reality so tightly it’s hard not to see through her eyes as well.

More than anything, this production regains the sense of political urgency that has been lacking in any subsequent productions from its original run. When it first premiered, “Angels” spoke directly to the fears of an America overrun with religious fundamentalism, global catastrophe, and a government ignoring minority groups to their death. Prior was facing nightmares from an Angel, but the real nightmare was silently, and invisibly, dying from a plague that no one could cure. Surprisingly, or tragically, the play has not dated out of believability, but gained even more relevance as the spirit of Roy Cohn returns to the White House, zealous political movements spread, and the country clings onto something to believe in. The Angel’s prophecy, called the “Anti-Migratory Epistle,” sounds dangerously close to isolationist mentalities within the current refugee crisis.

But what “Angels” preaches is the value of humanity over any institution, a message desperately needed right now. All of the characters put their faith into systems—Liberalism, Republicanism, laws, governments, revenge, marriage, religion, America—only to have these institutions fail them. When they are left with nothing, when their entire world falls apart, they find each other and are saved only by recognizing the dignity of perceived enemies or strangers.

This is a message revealed from the very first scene of the show. A Jewish rabbi (portrayed by Susan Brown) memorializes Louis’s grandmother, speaking toward the audience. Even in this time of grief, overwhelmed by death and fear, she addresses the audience and makes them laugh, the implication being that we are members of the Jewish-American family from the very beginning. There is no separation between us and what is happening onstage: we are part of the same world. This production of “Angels in America,” more so than any other version I’ve seen, reveals the interconnectedness of its characters and the shared pain of the human experience across all identities. The play is not solely about the LGBT community or the Jewish community or America in the 1980s. It’s transcendent. As devastating as this moment in our history is, “Angels” is a dream and a promise: We will mend together.