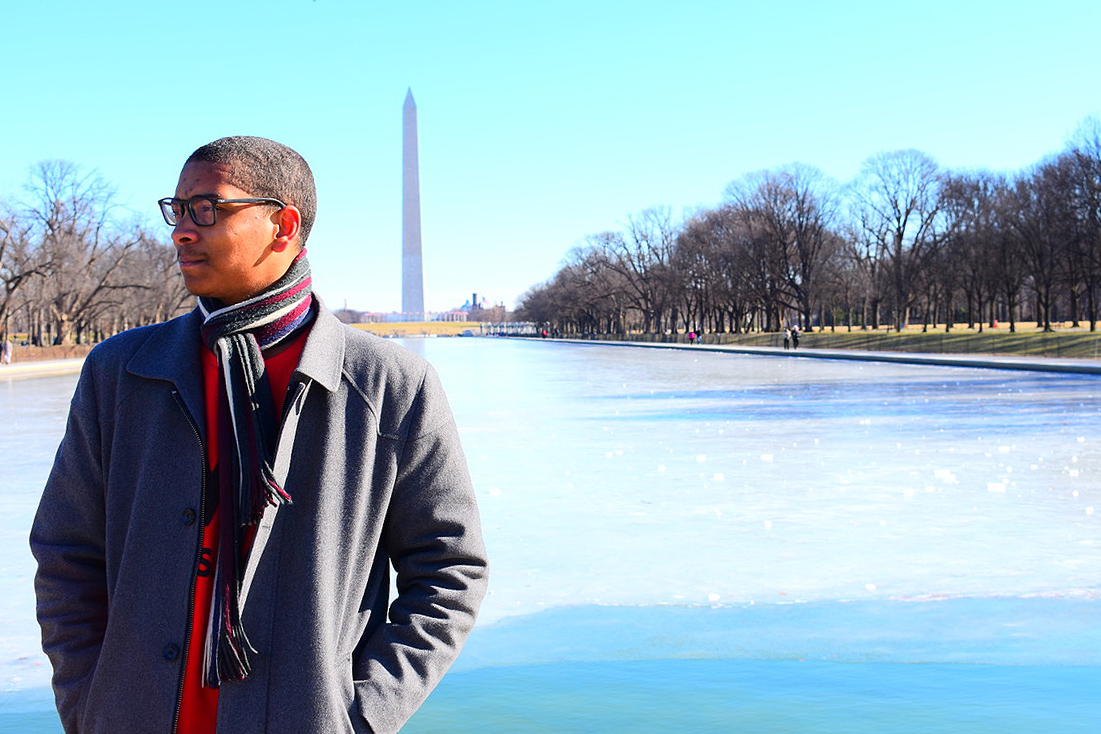 Anthony Price ’20 has taken his sophomore spring to intern for the Congressional Black Caucus Foundation in Washington, D.C. The prospective American Studies and Government double major is participating in the five-month Emerging Leaders program to gain experience on the Hill and provide support to the foundation. The Argus spoke with Price about his experiences on Capitol Hill, how he made the decision to take the semester off, and his political aspirations.

The Argus: How has Washington, D.C. been treating you? What’s the experience been like so far?

Anthony Price ’20: It’s been a roller coaster, but I’d say that in a good sense, because it’s a really great opportunity to be here for five months interning on Capitol Hill. It’s through the Congressional Black Caucus Foundation and it’s been a great experience to learn more about government, more about the legislative process, and see some of the things that we don’t see on a day-to-day basis, the work that’s being done.

A: What were your expectations of the program going in?

AP: I took it with open arms. I expected that it would be a lot of work, and I wanted to make sure that I was prepared to do the work. Efficiency is key here. A lot of people depend on people who can get work done in a timely manner because, even though people think our government is very slow, a lot of things happen at a fast pace. So I wanted to make sure that I’d be able to do the work. I understood that I didn’t have a lot of knowledge—I’m still in college—but I knew that I’d have the willingness to adjust and be adaptable to my surroundings. I think that having other internships experiences that have provided me those situations to adjust and to adapt to my surroundings helped me for this point. I’m scheduled to attend a briefing in the morning, but I have to give two tours to constituents. Or a tour might be cancelled and I have to write two memos by noon. Or I have to listen to 100 voicemails within the next hour but I have to also sit at the front desk and answer calls. It’s never an ordinary day, which I kind of enjoy, because it keeps me on my toes and makes sure that I’m constantly learning.

A: Even though this is so clearly such a great opportunity, I think that some students might hesitate to take a semester off to pursue something like this. So what made you take that leap?

AP: Yeah, it’s scary. I was one of the freshmen that took a little too many courses. I took about six courses, and we were probably supposed to take four. And I kind of did the same thing my first semester of my sophomore year. So that was one of my concerns. My priority always is to graduate on time, and I want to graduate with my class that I entered with, so that was a big factor in determining, ‘Do I want to come out to D.C. for five months?’ I got my decision two weeks before last semester ended. I took the time to literally write all the advantages and disadvantages out for this internship, and the advantages outweighed the disadvantages. Just talking to different deans—Dean Renée Johnson-Thornton was very helpful in this process, a couple of my professors, my mentor [Director of the Patricelli Center for Social Entrepreneurship] Makaela Kingsley [’98], we sat down and talked. And overall, I took the risk to come out to D.C. to get this experience because I may not get this experience outside of my Wesleyan education. If they were offering me free housing, a stipend, and basically just to come down to D.C. to learn as much of the legislative process as possible, I wanted to make sure I could do that. So overall, it was a big risk, but I don’t think I would change my mind if I was still sitting in my dorm trying to make the decision.

A: I don’t really know how many opportunities like this are available. Was there something that drew you to the foundation, or did you just want an opportunity to work on the Hill in general?

AP: Yeah, that’s a good point. My Congresswoman, Marcia Fudge, she represents the 11th district in Ohio. She was actually, in the past, the Congressional Black Caucus Chairwoman. We had a close relationship because I went to her student delegation to China in high school, so I had an understanding of the Congressional Black Caucus, but I didn’t know they had this whole other entity that’s non-partisan called the Congressional Black Caucus Foundation. So it was actually me looking up, for a homework assignment, different caucuses in Congress, and I just so happened to pass the foundation’s website. It convinced me to apply. I reached out to ask questions. It was very competitive, so I wasn’t expecting to get it. Quite honestly, I was trying to get through the semester as any other Wes student trying to do. It just so happened that on a Friday, after a long week, I got the letter. It was a total of 300 college students that applied for this, and they only accepted 26. I felt like it was a big honor and a big responsibility for me, because I’m in the second Congressional Black Caucus Emerging Leaders, maybe the third, and I was one of the small few that had been offered this opportunity to work on Capitol Hill.

A: How have your experiences and your classes here at Wesleyan informed your experiences? You’re a Gates Millennium scholar, an Allbritton fellow, a Patricelli Center fellow. I also don’t know how you find the time to do all of that and take six classes every semester, I’m a little confused.

AP: Thank you, I’m learning as I’m going. I would say, since the recent election and the transition from President Obama to President Trump, that kind of ignited a flame in me. I wanted to make a difference in some way. I wanted to work for the people that are trying to ensure that citizens and people in this country have a voice. I am proud to say the senator I’m working for, who represents me in Ohio—not to get very political—but I wanted to be a part of the movement that wanted to make sure that everyone in this country can have the opportunity to have a better life, to get a job, to have your family feel safe. So that was my motivation, but I didn’t know how to do that exactly. If you told me that during the inauguration, I wouldn’t expect to be in D.C. this soon, but I think it just happened from that moment of saying I wanted to make a difference. And I wanted to make a difference in the institution by working in the institution.

I’m not disagreeing with folks who are in this institution and who want to create their own institutions—I’m for that—but I thought it would be effective for me, as a college student, to work within the institution to change the institution. While it sounds very philosophical, I think I’m making a small difference each and every day because I’m the first to encounter a constituent’s call. I get to make the decision of who to talk to, if I relay the message to the senator or to a staffer. That’s a very powerful role that, I think, a lot of us overlook as being an intern, but you’re depended on a lot in a member’s office because you’re in contact with people each and every day.

A: Would you say that this experience has been encouraging for you, with respect to the legislative process?

AP: I definitely think it’s given me more motivation, because at some point in my career, I do want to run for office. I do want to be an elected official and I do want to represent marginalized communities like mine. I will say that it has given me greater hope for the future—even though we hear politicians say it all the time, that people give you hope for the future—but I would actually say that’s true. To see people here every day, despite what’s being shown on the media or in headlines, folks here are actually making a difference, and we need people who have the willingness and the passion, the drive, to make sure that that happens. We need folks to serve as advocates and speakers for the voiceless, and there’s a few people here doing that, and I think we need to ensure that there’s more folks like that—that are reflective of the general population. Every day I hear from different people, “These are institutions of the people.” So we have to make sure that we have people in these positions of power to reflect the people’s voices. And we see that right now we have to push harder, the speak to power, to ensure that we have people in positions of power that represent us effectively.

A: Is there anything else you want to add about your experience?

AP: No, not really. If anyone is interested in working on the Hill—I’ve had the opportunity to, surprisingly, reach out to a lot of Wesleyan alums—you’d be amazed, the list of people from Wesleyan who are on the Hill is very long. So if folks are interested in doing something like this, I definitely encourage them to do it, whether it’s starting out working for your representative back at home, or if you want to come out to D.C., there’s opportunities to do that. I’m more than happy to be a resource to connect people to different offices.

Hannah Reale can be reached at hreale@wesleyan.edu or on Twitter @hannahereale.