Oscars Push for Diversity While Holding on to Old Ways 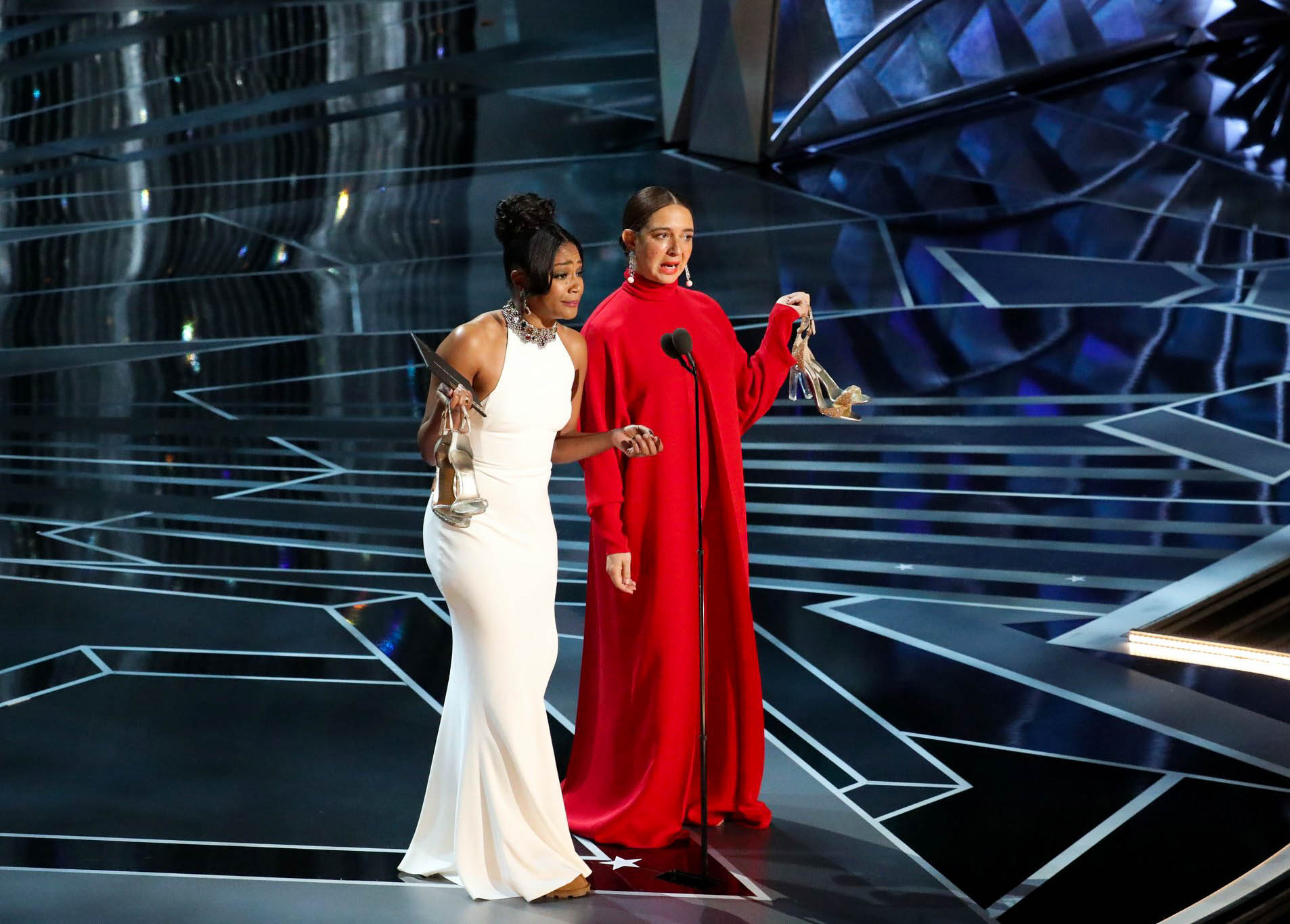 The 90th Annual Oscars was, likely unintentionally, a perfect reflection of the current state of Hollywood. The winners were more diverse than ever before, while the traditionalists voted for all the people you would’ve expected to have won a few years ago. The host was once again a forgettable white man; but the presenters were more diverse and more worthy of the spotlight. Some shady people won the high honors while everyone else booed Harvey Weinstein and his compatriots. Yet, even if some old habits die hard, this year’s Academy Awards were ultimately a moment of change and hope for the industry and movies as a whole.

Jimmy Kimmel kicked things off with his unfortunately lethargic opening skit and monologue. His opening bit, filmed in old-timey black and white, featured Kimmel doing a lazy impression of a ’40s radio host. It was short and uncreative, with half-baked jokes about various celebrities. While Kimmel has become decidedly more political as of late, fighting for universal healthcare after his newborn son needed surgery, his homages to the Time’s Up and #MeToo movements were uninspired at best. He nonchalantly gestured towards the hard work and activism working to end sexual harassment in the workplace, but he never did more than dispassionately read from the teleprompter. In what seemed like an attempt to one-up last year’s Best Picture mess-up (in which “La La Land” was mistakenly given the Oscar, when “Moonlight” had actually won), Kimmel announced, with the help of Dame Helen Mirren, that the winner who gives the shortest speech would win a jet ski. It was hardly funny or inspired material.

But where the host fell short, the presenters rose to the challenge. Ranging from the political to the comedic, the show’s celebrity presenters kept the show entertaining. Lupita Nyong’o and Kumail Nanjiani threw their support behind DREAMers while cracking a few jokes about how nobody can pronounce their names (“Actually I have to come clean, Kumail Nanjiani is my stage name, my actual given Pakistani name is Chris Pine”). Jennifer Lawrence and Jodie Foster took jabs at Meryl Streep, after which Lawrence, in a sweet moment, publicly thanked Foster for helping her early in her career. But the best presenters were undeniably Maya Rudolph and Tiffany Haddish.

“When we came out together, we know some of you were thinking: Are the Oscars too Black now?” Haddish said.

“We just wanna say: Don’t worry, there are so many more white people to come” Rudolph responded.

Meanwhile, while many of the night’s winners reflected the Academy’s push toward diversity, some still represented Hollywood’s traditionalism. Gary Oldman, for example, won Best Actor in a Leading Role, a win nearly everyone expected. The Academy, throughout much of its history, loves seeing actors play historical figures (see Ben Kingsley playing the titular role in “Gandhi”) or actors who perform under some kind of physical burden, such as losing or gaining obscene amounts of weight (Christian Bale in “The Fighter”) or playing someone with a disability (Daniel Day-Lewis in “My Left Foot”). Oldman, portraying British Prime Minister Winston Churchill under pounds of prosthetics and make-up, gave a performance that featured much of what the Academy has loved to give awards to.

But he’s also yet another powerful man in Hollywood with a bit of a shady past. In 2001, his then-wife Donya Fiorentino accused Oldman of assaulting her, in front of their children, while she tried to call 911. No charges were ultimately filed against Oldman, meaning Fiorentino’s accusations can only be considered just that: accusations. Yet the Oscar winner has publicly stated some wildly unethical opinions. He has defended Mel Gibson’s infamously anti-Semitic and racist behaviors, such as a drunken rant to a police officer in which he claimed that “The Jews are responsible for all the wars in the world,” or when Gibson yelled racial slurs at his ex-partner Oksana Grigorieva before assaulting her (which Gibson pleaded guilty to in court). Oldman claimed everyone who criticizes Gibson is a “hypocrite,” as they’ve probably said something similarly racist or anti-Semitic at some point in their life. Perhaps Oldman was trying to invoke the Gospel of John and say, “Let him who is without sin cast the first stone.” Then again, I don’t think it’s a particularly understandable sin to blame all Jewish people for all the world’s wars. Oldman may have apologized for his remarks, but they’re troubling nevertheless.

That Hollywood, in the midst of a moral reckoning, would still support men like Oldman is deeply disappointing, to say the least. It’s also not entirely surprising; as Ira Madison, entertainment writer at “The Daily Beast” observed before his nomination, support for Oldman is a sign that Hollywood isn’t yet able to fully change itself.

“As more and more instances of abuse are brought to light in Hollywood, and its members claim they want to bring about change, what is to be done about Oldman,” Madison writes. “At some point, change will mean addressing all of Hollywood’s ghosts—not just the ones who are cartoonishly monstrous like Weinstein and [Kevin] Spacey.”

While Oldman’s win represents the worst of Hollywood, there were plenty of other worthy actors who took home the golden statue. Sam Rockwell, the prolific character actor who should’ve gotten at least a nomination for his performance in 2009’s “Moon,” won Best Supporting Actor. At the end of his speech, when the music started playing, he dedicated the award to his old buddy “Phil Hoffman,” a touching reference to the late actor Philip Seymour Hoffman, who died of a drug overdose in 2014. Allison Janney, of “The West Wing” fame, won Best Supporting Actress for her portrayal of Tonya Harding’s mother, LaVona Golden, in “I, Tonya.” And Frances McDormand won her second Oscar with her fiery performance in “Three Billboards Outside Ebbing, Missouri.”

Yet, in spite of some disheartening or predictable wins, there was a sense that something was genuinely changing for the better in Hollywood. McDormand, in her passionate acceptance speech, asked all of the female nominees to stand up. She ended her speech by calling for “inclusion riders.” As Ignatiy Vishnevetsky of the AV Club explains, a rider is a last minute addition or change to a contract, signed separately so the entire original document doesn’t need to be rewritten. A call for “inclusion riders,” then, is a call for producers to add more diversity to their movies as soon as possible.

Guillermo del Toro’s “The Shape of Water,” a fairy tale for adults about the people usually marginalized in fairy tales, won Best Picture, a sign that the Academy is more willing to support movies that don’t fit the traditional mold of an Oscar movie, both in terms of style and diversity (even if the film was definitely not the best of the year).

But the most satisfying moment of the night was Jordan Peele’s much deserved, Best Original Screenplay win for “Get Out.” His victory is both historic (he’s the first African American to win in that category) and well-earned. “Get Out,” like the similarly praise-worthy nominee “The Big Sick,” tells a story that uses the tropes of its genre to engage with taboo issues surrounding race, while also speaking to something deeper. But while “The Big Sick” spoke to the complexities of romance, “Get Out” was ultimately more original and more profound. Peele managed to explore the psychological horror of racism while delivering relevant social commentary about white liberals and their hidden biases. His film managed to do all this while also succeeding as an entertaining horror flick.

His win is also hopefully a sign of Hollywood’s future. It’s a future in which the Oscars aren’t given out to the movies that neatly fit into the Academy’s stiff standards, but the films that take creative risks, inspire and entertain audiences, and are comprised of diverse casts and crews. It’s a future in which the term “Oscar bait” is antiquated, as the Academy embraces films that don’t fit traditional molds.

While the old Hollywood guard hasn’t quite given their power up yet, there’s hope that next year will be another step in the right direction for the film industry. Then again, if Lin-Manuel Miranda ’02, Hon. ’15, doesn’t host, all hope may be truly lost.