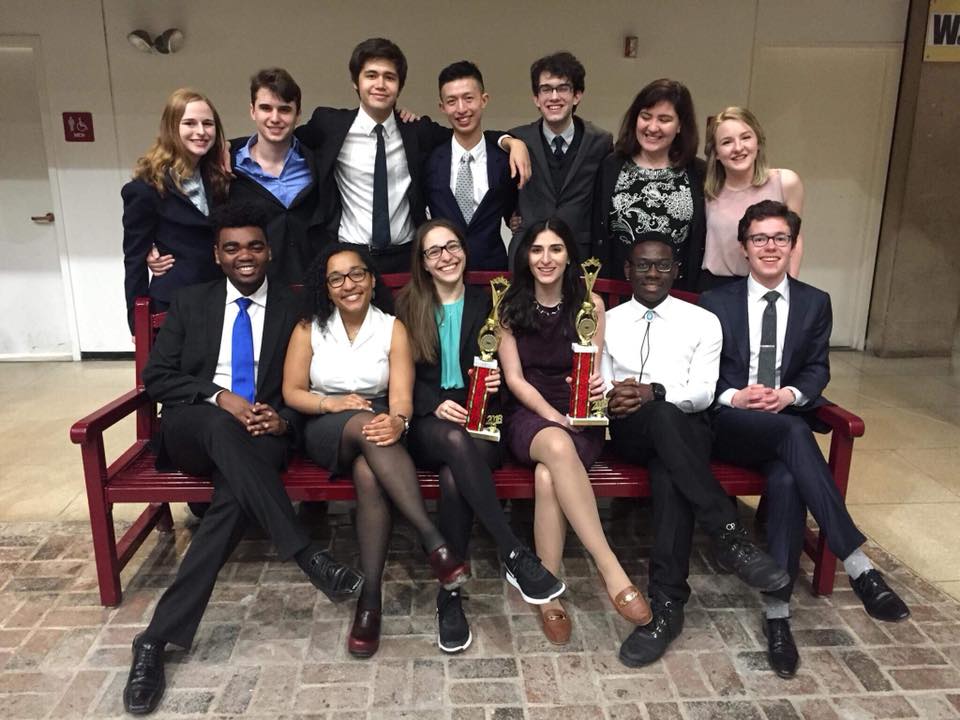 The A and B Teams in Buffalo. c/o Nell Buechler

The two top-tier teams attended the American Mock Trial Association’s annual Great Lakes Regional Tournament at Buffalo State University, where they were joined by 21 other teams from 13 colleges and universities around the Northeast.

The teams served as both prosecution and defense in an attempted murder case that involved a married man collaborating with his mistress to kill his wife. Their arguments, which they delivered over a course of four trial sessions, were judged by attorneys from the area.

After two days of competition, the A-team won 8-0-0, coming in first, while the B-team finished with a score of 6-2-0, placing sixth. Three students also received honors for their performances. The A-team’s Fitzroy Wickham ’21 was recognized as an outstanding witness, and Heather Pincus ’19 and Josh Ng ’20, from the A and B-teams, respectively, were recognized as outstanding attorneys.

“Each and every member of the team put their heart and soul into the program,” B-team co-captain Tess Vartanian ’20 wrote in an email to The Argus. “It’s something that we all deeply care about, and we know that the program is bigger than any one individual on the team.”

Wesleyan Mock Trial’s success continued at Princeton University, where the C-team competed in the first Princeton Regional Championship. The tournament was held in the Julis Romo Rabinowitz Building at the Woodrow Wilson School of Public and International Affairs.

“I think the biggest surprise of the weekend came from our team,” said C-team co-captain Alexandra Prendergast ’20. “The C-team is comprised of almost exclusively mock trial newbies, with the exception of Matt Renetzky [’18]. Apart from Matt, all of our teammates are freshmen and sophomores who have not done mock trial prior to this year. This past weekend, our team of newbies outranked some of the mock trial best teams in the country, including Yale, Tufts and Wellesley.”

As a result of their performances, all three teams will advance to the first round of championships in Lancaster, Penn. on March 23. If any of the teams place in the top six at the Opening Rounds Championship, they will move on to the National Championship in Minneapolis, Minn.

Whether they advance or not, Vartanian says she is incredibly proud of what she calls a historic win.

“All three of Wesleyan’s teams qualified for Opening Rounds Championships, which has never happened before,” she wrote. “I think that our school has established a strong reputation in the Mock Trial community, and other schools recognize us a serious program that is here to stay.”