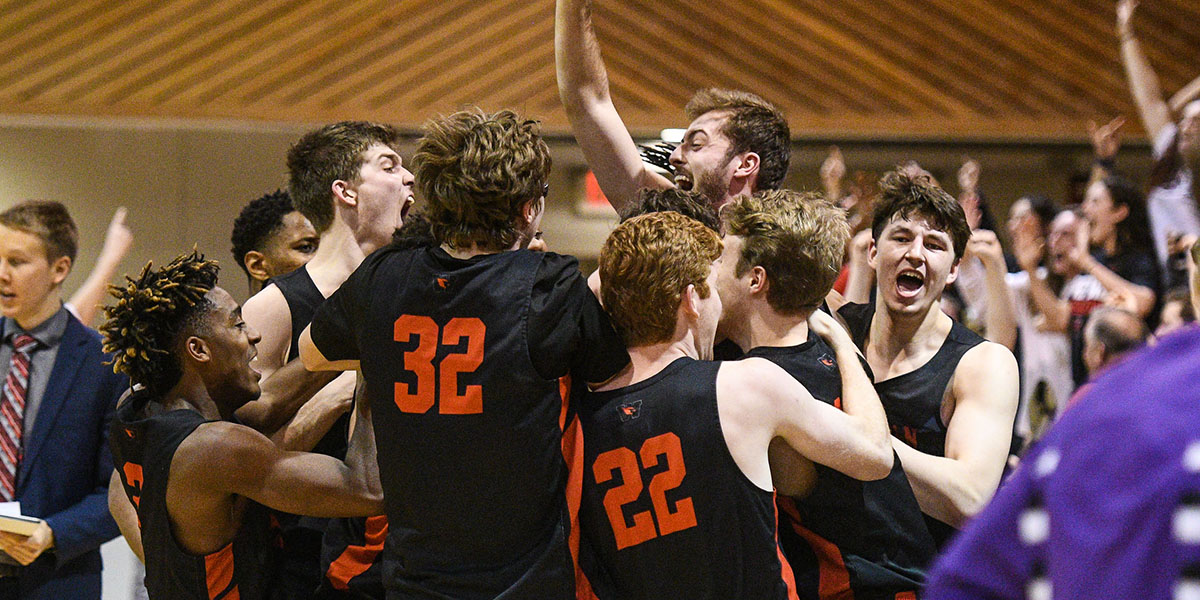 The Wesleyan men’s basketball team, ranked 15th in the country, had an exciting end to their NESCAC season this past weekend. In the NESCAC semifinal, the Cardinals sunk a buzzer-beater to secure a 65-63 win against Amherst. The next day they fell to Williams, who is ranked 5th nationally, in the NESCAC championship game with a final score of 69-58.

The weekend’s games took place in Amherst, Mass. at the home of the Mammoths. Saturday evening was a close game, with the Cards leading by six at halftime before Amherst outscored them by four in the second half. The Cardinals needed a big game and a big shot from Nathan Krill ’18, which is exactly what they got. Krill dropped 29 points, including the game-winning 3-pointer with 1.7 seconds left from well beyond the arc. This capped off a game in which Krill also grabbed 10 rebounds and went 7-11 in 3-point shots. Offensively, the Cardinals struggled, only shooting 36.9 percent from the field, but counteracted this by hitting 41.7 percent of their 3-point attempts. Their defense was stout, per usual, holding the Mammoths to 35.5 percent shooting and only 30.8 percent from three.

Coach Joe Reilly was excited after the game and already looking ahead to Sunday.

“I’m proud of our team,” Reilly said. “They showed a lot of grit on the road. Nathan Krill really stepped up for us, and his work ethic and team-first mentality as a senior leader has been fun to watch. We are excited to be playing on championship Sunday.”

Jordan Bonner ’19 also had high praise for the Cardinal senior.

“If I could hug Krill right now, I would,” Bonner said. “He was an absolute beast and without him, we wouldn’t have made it to the championship game. Like coach says, ‘One shot can win a game but one shot or play can’t lose a game.’ Krill’s buzzer beater is a prime example of that. What’s special about our team is that we genuinely share in each other’s success. At the end of the day, we all just want to win so no matter who gets it done, we are all happy with the W. His buzzer beater three will go down as one of the most clutch/best shots in Cardinal basketball history.”

Unfortunately for Reilly and the Cards, they ran into the Williams Ephs on Sunday. The game had a decidedly defensive tone as both teams shot under 40 percent from the field and under 30 percent from 3-point range. Wesleyan shot an abysmal 18.8 percent from three (6-32).

The team was led by Bonner, who scored 15 points, and Krill, who scored 12. However, it was not enough to get by Williams, who outscored the Cardinals by eight in the first half and three in the second half.

“It was really exciting to play in the NESCAC Championship,” Bonner said. “We had a huge turnout so I’m thankful for all of the families, friends, and fans that came out support us despite the tough loss. I don’t have any regrets about the game. Williams is a top-five team in the country and I don’t think we played good enough to beat them that day. We will see them again in the NCAA Final Four so I’m using that as fuel going forward. I’m really proud of my teammates and how well we have done this season. We have had a lot of success despite some adversity and I think going forward, the regular season has definitely prepared us to make a deep run in the NCAA Tournament.”

Although the Cardinals didn’t take the NESCAC, the team still has a lot to be proud of. This edition of the men’s basketball team set a school record for wins in a season with 21 overall. In addition, the Cardinals claimed an at-large bid to the DIII NCAA men’s basketball tournament for the second straight year. This gives the team at least one more opportunity to add to the already impressive win total. Tonight, March 2, they’ll host Southern Vermont College, who won the New England Collegiate Conference Title this year. Should they claim victory, they’ll advance to the following weekend.

The Cardinals have earned some individual accolades as well. In addition to being a top-10 scorer in the NESCAC, Bonner was named to the Academic All-District first team by the College Sports Information Directors of America (CoSIDA), as well as the All-NESCAC second team.

“I’m a student-athlete,” Bonner said. “Contrary to what others may believe on this campus about athletes, I take my academics and classes seriously. I am here as a student first and my mom has always stressed the importance of education and holding me to high standards in the work I do in the classroom. I take classes that challenge my intellect and stimulate my mind. I love to learn and I work hard for everything that I have achieved thus far. I am happy to be recognized for this award because I know personally, that I have sacrificed a lot to ensure that I do well in the classroom and on the court.”

After their second NESCAC finals appearance in four years, the team heads to the NCAA tournament for the third time in the same time span. The team hopes to get a rocking Silloway this weekend to cheer them onto the next round.