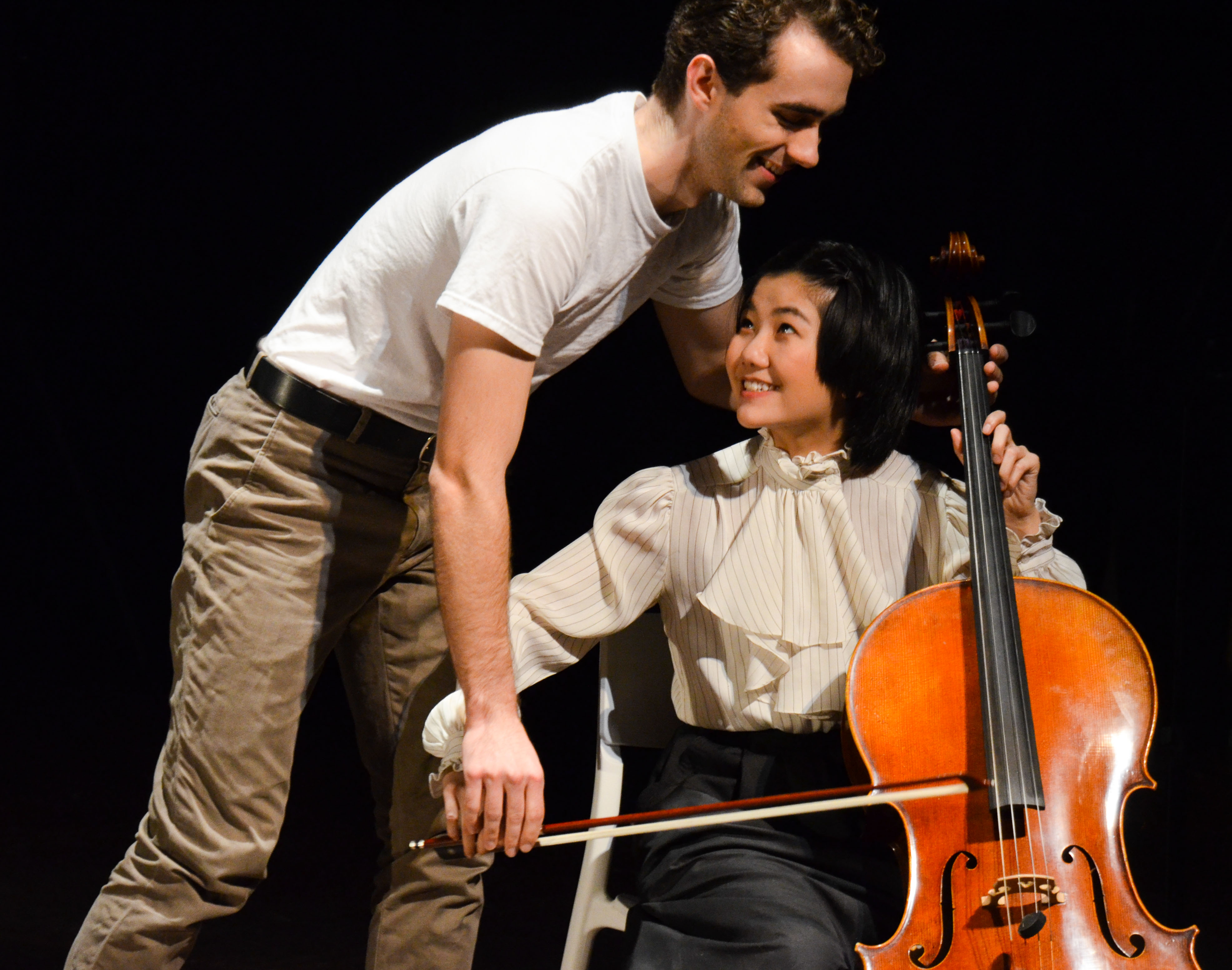 At times, “99 Histories” takes the shape of a letter—addressed to an unborn child whose fate is all but sealed, spoken from the lips of a woman too lost to be a mother, and yet burdened by too much history to be a child. These warring narratives claw at Eunice (Rix Chan ’21) throughout the course of the play as she looks to none other than her own mother, Sah-Jin (Gayon Yang ’20), for answers. Yet in Director Yichen Eva Lou’s ’18 rendition of the Julia Cho play, it’s unclear if the questions Eunice is asking are the right ones.

Eunice, pregnant with her ex’s child, has returned to her mother’s home in Los Angeles, having just broken up with boyfriend Joe (Andrew Dalton ’20). Once a budding cello prodigy, Eunice’s musical career was cut short by a severe mental illness. With time and medication, however, she has learned to lead a normal life. She plans on putting the baby up for adoption, an idea with which her mother is none too pleased. In hopes of sparking a romance and giving the unborn child a chance at a proper family, Sah-Jin reintroduces Eunice to a doctor and childhood friend, Paul (Andy Lei ’19). But he is engaged, and Eunice, not at peace with her troubled past, refuses to (or perhaps cannot) properly move forward. 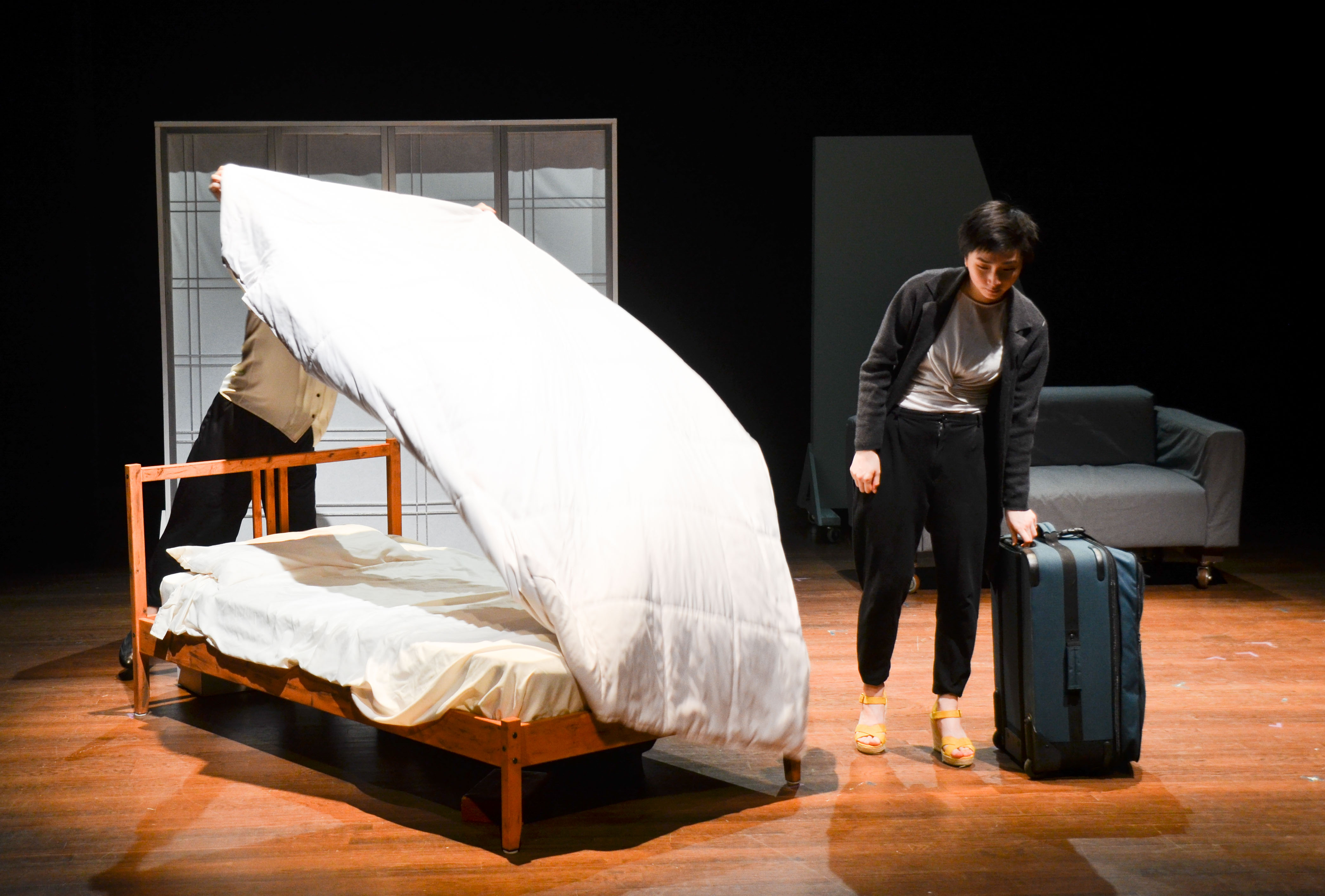 When she finds a chest full of her mother’s keepsakes along with her old cello, the bracing traditional narrative structure comes crashing down as Eunice is assaulted and overcome by memories that are not entirely her own. In the chest are pictures of a woman who looks just like Sah-Jin and a book bearing the signature of a mysterious Daniel (also played by Dalton). Although Sah-Jin initially dances around the truth, we learn that the woman in the photograph is none other than Sah-Jin’s sister (Fiona Sun ’20); Daniel is a former love interest, and we also meet a younger Sah-Jin (Sige Zheng ’20). Eunice explores this lost (but not forgotten) history not as an outsider looking in, but from within as though she were truly there.

One of the most poignant moments in the play comes in a sequence in which Sah-Jin and Eunice are discussing the latter’s inheritance; Eunice is generally reserved and sarcastic—locked in a state of constant withdrawal like Russia during the French invasion, according to her ex, Joe. But in this moment, Eunice is dramatic; she is selfish, enigmatic, and honest all at once. When Sah-Jin reveals that the same disease Eunice has once plagued her sister, Eunice begins to lament the nature of her inheritance, wailing that her ‘heirloom’ consists not of beauty or wealth, but disease. Chan and Yang deliver a compelling take on the mother-daughter dynamic; the former’s distress is palpable, particularly when interspersed with the crooning of the cellist (Aïli Niimura ’19), while the latter’s muted maternal affection is extremely convincing.

It may seem paradoxical, but when Eunice finally finds herself, it is in others—particularly in her family. Despite all the deception and pent-up feeling, the bond between Eunice and Sah-Jin is never in question. The matronly and deeply religious Sah-Jin serves as the realistic if slightly cynical foil to Eunice, whose self-hatred and inability to define herself fail to mask her curious optimism. Their conflicting perspectives reflect not so much an inherent difference in ideology, but rather the passage of time.

This is most evident in their discussions around “chung,” a unique concept which loosely translates to love. Sah-Jin likens “chung” to having a shadow—it is lasting and essential, an alternative to passionate, short-lived infatuation. Eunice does not oppose this take on relationships, instead pressing her mother for answers as to how “chung,” is attained, as though it were some stage of enlightenment. In fact, time seems to account for many of their differences. In particular, their blatantly oppositional views regarding history are a product of Eunice longing for experience and Sah-Jin having already gone through the motions.

Eunice’s relationship with history and, consequently, memory, is both necessary and debilitating—in a moment of insight, she realizes that as a musician, her memory is ingrained in her body as much as it is in her mind. Yet that unshakable memory is painful and taxing. Sah-Jin was once a musician too, and despite her verbal denouncement of the past, we see her making conscious efforts to retain what once was, listening to Eunice’s old recordings and filing away reminders of her childhood in her hope chest. The very nature of said chest betrays Sah-Jin’s true feelings. Over the course of the play, Eunice’s identity becomes codependent with those of whom she loves: her mother, her unborn child, even her aunt. She complicates the idea that identity is predicated on individual eminence, finding meaning in her body as a vessel for new life and as an heir to a maternal legacy. Before, the duality of her self was like a transform fault, two plates tearing in opposite directions; but Eunice is neither the ambitious cellist of yesteryear nor is she the contrarian nomad she appears to have become. Thus, rather than look inward, Eunice turns to her family. Nearing the play’s conclusion, Sah-Jin confides in Eunice, “You are my great love because you are me.” Lou, Yang, and Chan combine to create this moving thematic intersection in which histories converge. “Chung” is made visible, and family endowment comes full circle.

Working with a small cast and only a dozen or so props, it is remarkable what depth of emotion and complexity of plot the play achieves. There is a certain chiaroscuro surrounding the set, most evident in the wardrobe, dominated by black and white, rigid and geometric—but also flowing with the shared feature being pleats (designed by Lizzie Phan ’19 and Hanshu Wang ’21). As the play weaves through the lives of three women as portrayed by five separate actresses, all of their experiences unfold as distinct and yet superimposed over one another, to the effect of seeing double—quintuple, even. It is in this collectively hallucinatory fashion that the play reaches its conclusion, all five actresses standing as one, bathed in a blue light.

As an Asian reproduction of an Asian-American playwright’s work, centered around a Korean-American protagonist, Lou faces a daunting challenge of rising above the race gimmick. “99 Histories” certainly plays on many tropes of Asian-American stories: the austere, conservative facade of a deeply loving parent and her rebellious, Westernized child, and the emergence of a Westerner as a romantic interest and the cultural struggles of immigrants (embodied by Eunice’s late father), to name a few. Where Lou’s take on “99 Histories” pushes the envelope, however, is in its broader suggestion regarding the value of a collective identity. Instead of treading on each other’s toes, the cast members play off of one another and as such, their characters succeed in eclipsing mere tropes.

Nic Guo can be reached at nguo@wesleyan.edu