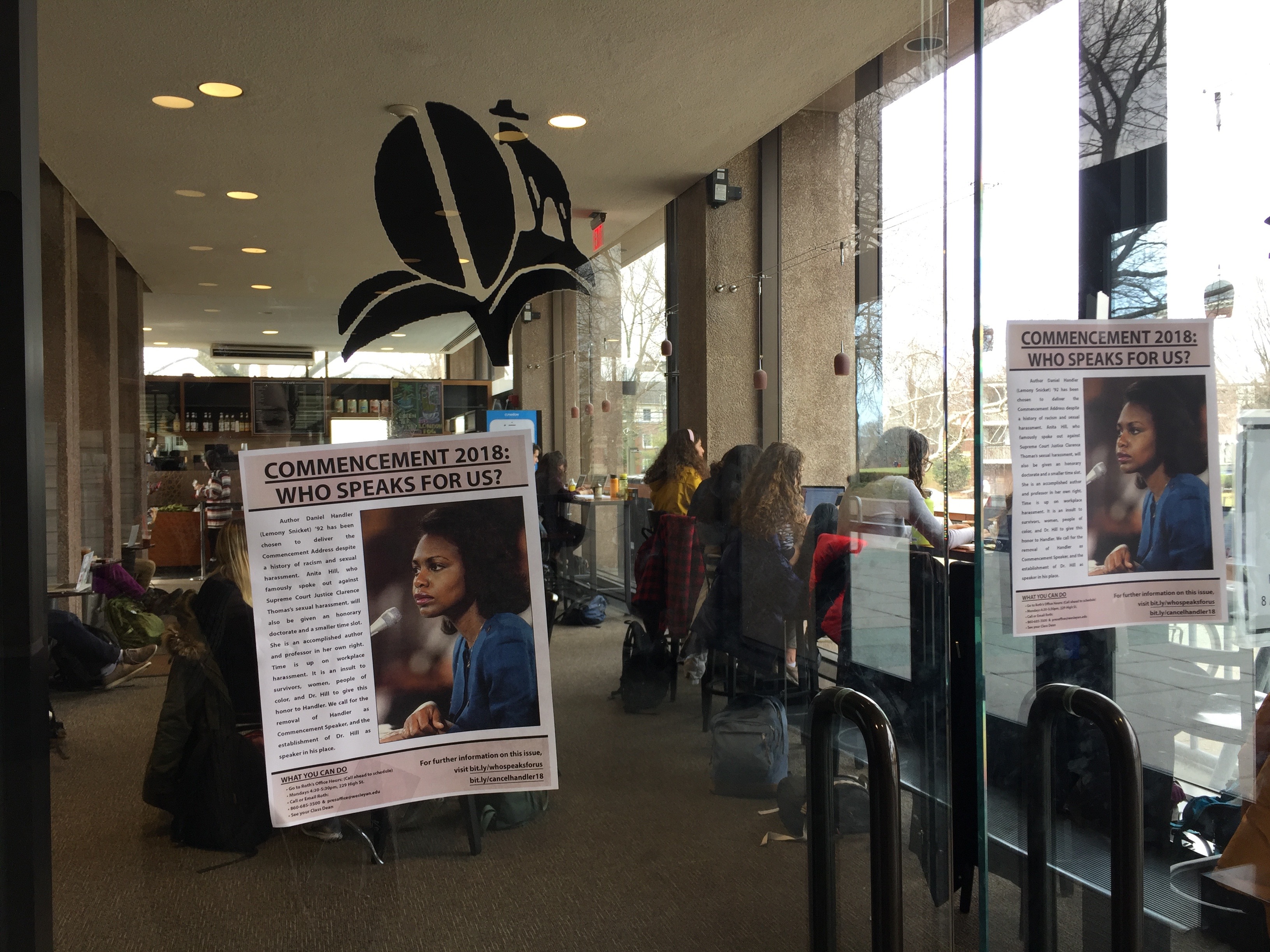 University President Michael Roth ’78 sent out an all-campus email on Thursday, March 1, announcing that Daniel Handler ’92 will no longer be giving the 2018 commencement address.

“Daniel Handler has chosen to withdraw as Wesleyan’s Commencement speaker this May,” Roth wrote. “We’ve agreed that the focus of the event should be on the Class of 2018, their families and the celebration of graduation. I’m pleased to share that Anita Hill has graciously agreed to deliver the Commencement address.”

The University announced on Feb. 15 that Handler, better known by his pen name Lemony Snicket, would give the commencement address to the class of 2018. Scientist and entrepreneur Joshua Boger ’73, P’06, ’09 and Hill, who famously testified before the Senate about Justice Clarence Thomas’ workplace sexual harassment, would also be speaking and earning honorary degrees.

As students quickly noticed, the children’s author behind “A Series of Unfortunate Events” had made a joke about the fact that fellow author Jacqueline Woodson was allergic to watermelon on the stage of the National Book Awards in 2014. Woodson had just given a speech at the event as the first African-American woman to win a National Book Award in Young People’s literature. Handler swiftly apologized, acknowledging that the remark was racist, and made contributions to We Need Diverse Books, an organization that promotes inclusion in children’s literature.

This event on its own may make some wary of his behavior, but the comment was not Handler’s only instance of harmful and inappropriate conduct.

On Feb. 9, author Gwenda Bond wrote a pledge to end sexual harassment in the children’s literature industry, which Handler signed. Taking his response as a desire to eliminate cases of sexual misconduct in professional settings, many women commented with personal stories about Handler publicly telling sexually inappropriate jokes or humiliating them, primarily at conferences and industry events.

The reports on Handler’s comments range in content, from him yelling across a crowded bus to ask a female author if she was a virgin, to joking to a room of young children that his Uniball pen was named after an “obscure medical condition.” The tone of the commenters was not aggressive but instead asked for Handler to reconsider his behavior.

Handler responded within the same comment section on Feb. 20, apologizing for any insult or harm he may have caused.

“My whole life my sense of humor has not been for everyone, and my books continue to be regarded, by a segment of the population, as inappropriate,” Handler wrote. “I take seriously the responsibilities of my visibility, and have always thought that treating all of my colleagues the same was the best way to dispel the unease that can come from a competitive or self-conscious environment.”

A recent article in the Pacific Standard, written by David M. Perry ’95, delved into the allegations against Handler and the recent tide of change in the children’s literature world. Perry plans to write another piece after more women have come forward and spoken to him about their experiences with Handler.

“There are more stories of the kind I wrote about, which is to say Handler making sexual or sexualized jokes in professional spaces in front of women in his field,” he said in a phone interview with The Argus.

“[Handler’s] whole personality cult is, ‘I’m edgy and different and I talk about sex and it’s wrong,’” Small said. “What’s wrong isn’t that he’s talking about sex, it’s the way he’s doing it: in a very violent and power-hungry way.”

A group of students, including Small, put up posters around campus on Monday, Feb. 26, calling for Handler to be removed from his position as a commencement speaker.

“Time is up on workplace harassment,” the poster reads. “It is an insult to survivors, women, people of color, and Dr. Hill to give this honor to Handler.”

University alumni and students also began speaking up over social media. They spoke out against the choice to honor Handler, and many encouraged their peers to contact Roth about their concerns.

Hannah Fritze ’18, who also worked to get Handler removed from the ceremony, added that this debate is not merely a matter of principle.

“A bunch of the people that are angry about this are going to be graduating at that commencement,” said Fritze. “It’s a speech that we will be forced to listen to…which puts us in the position of not attending our own graduation in order to avoid hearing this man speak.”

Small argued that the decision to bring Handler to the commencement ceremony comes as the latest incident in a long line of insensitive choices by the Roth administration.

“Much in the way that harassment tends to be a serial behavior, this administration has shown a serial behavior of treating its students of color and its female students…as an irritation and a sideshow,” she said. “It needs to be contextualized.”

“When we invited Daniel Handler, we were unaware of the most recent allegations about what some people perceive to be inappropriate comments or jokes or use of words,” Roth said in an interview with The Argus, before the March 1 announcement. “We take these comments seriously, and at the same time, are trying to understand what the best route forward is.”

The first report of sexually inappropriate behavior was posted six days before the University’s announcement, although Handler had not yet responded and it had not gained much traction online.

“They should’ve done their due diligence and checked up on him and done research,” Small said. “It’s somebody’s job to do that.”

Roth also explained his mentality in choosing to invite Handler to give the commencement address despite his racist joke in 2014.

“I was, of course, aware of the other joke that was a racist joke,” Roth said. “[Handler] visited the campus after that and spoke to a full house in the chapel about it. I did think that it would’ve been interesting to have someone who actually made a mistake,  recognized it, and owned it talking alongside Anita Hill, who didn’t have that response to the allegations she made about Justice Clarence Thomas, who still sits on the Supreme Court, as you know…. And maybe that was a mistake.”

He clarified that he perceives a difference between Handler’s 2014 comment and the newer reports of sexually inappropriate behavior.

“Handler has acknowledged that his comments at the 2014 National Book Awards were a really dumb mistake, and has tried to make amends for it,” Roth said. “But that’s different from these recent allegations, which are really about boorish behavior in a professional setting, which is really inappropriate. I wouldn’t ask him to not use certain words at commencement. I wouldn’t ask any speaker that. But this is different, these allegations of people feeling not just offended but humiliated.”

Roth’s announcement that Handler was stepping down came two weeks after the University named those that would be honored at the commencement ceremony.

Handler declined to comment on the announcement. His spokesperson responded to the requests with a link to the text of his Feb. 20 public statement.

“The point of the commencement speaker is always to speak to the graduating class about the moment they’re graduating into, and where we are as a school and as a society,” Small said. “It’s supposed to be talking about, going forward, what we should expect from the world and what we bring to the world. I don’t think there’s anybody who could better speak to the Trump era than Anita Hill.”

After the March 1 announcement, The Argus spoke with students who fought for Hill to replace Handler in giving the commencement address. Sentiments of victory and lingering frustration permeated their responses.

“This is really exciting, but also the fact that it takes someone shitty stepping down to get stuff done instead of having a university president support student concerns and rescind the speaking offer is still very shitty,” Fritze said.

“In terms of a broader pattern, the University administration, historically, have always been the last ones to acknowledge how harmful their behavior is and are really slow to react,” Small said. “This has nothing to do with, and was in fact in spite of, Roth’s administration. So I think that’s really important to remember.”

“President Roth invited me to deliver Commencement remarks and I was honored to accept the invitation to address the Wesleyan Class of 2018,” Hill wrote in an email to The Argus. “I’m looking forward to what I know is an important day for all graduates, myself included.”

Students also spoke to their excitement about Hill’s new role within the ceremony.

“I am so unbelievably thrilled to hear her speak,” Small said. “My little social-justice child heart will explode…. We always say about how much representation matters and how much it matters to see people like you reflected in positions of power and influence, and this is just such a victory for that.”