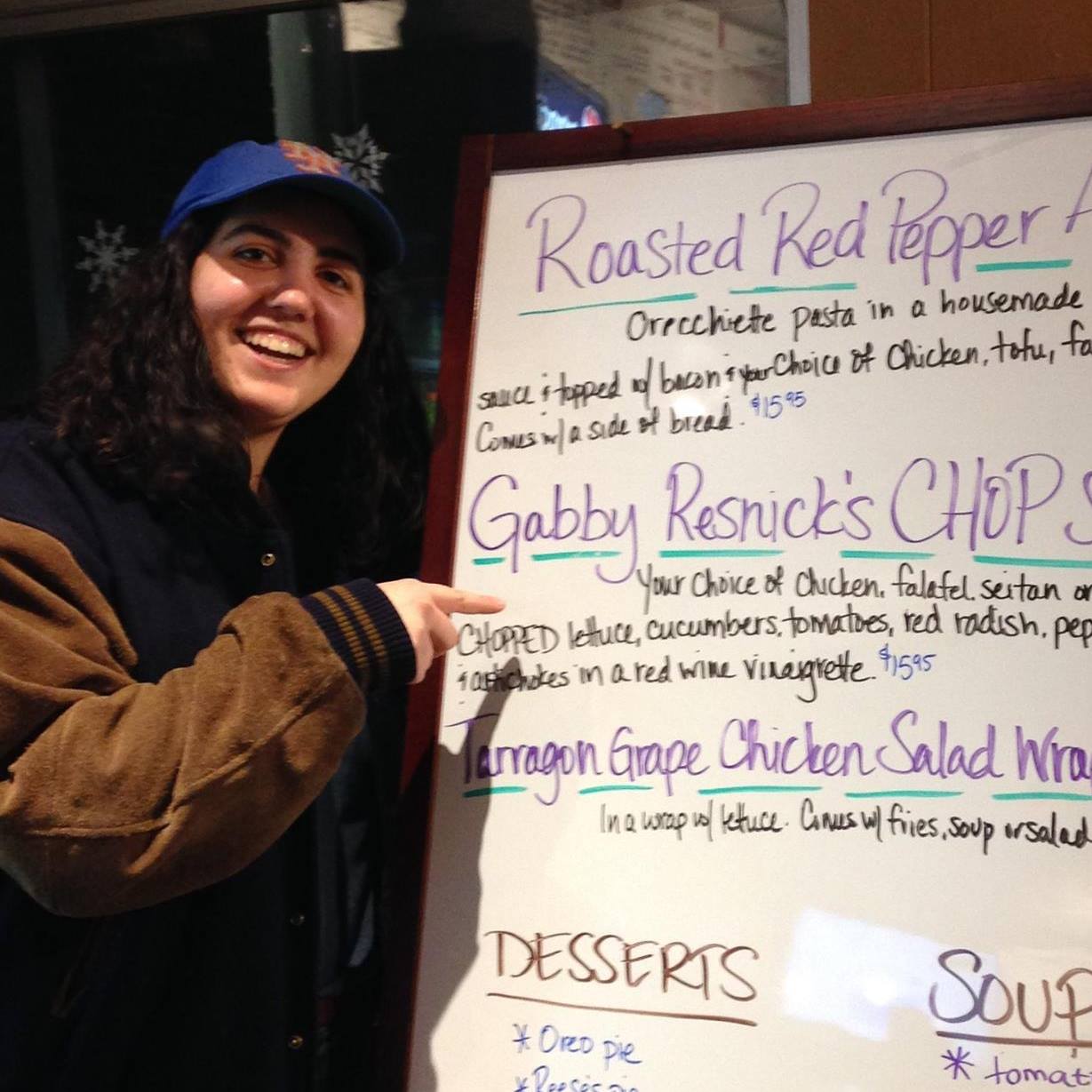 Want to know more about Gabby Resnick ’18? Travel back in time and go to the Gabby Resnick Pregame from her first year, or try the Gabby Resnick Salad at Swings, to understand the essence of this WesCeleb. Although she claims that it’s probably not often that you get something named after you, she seems to have reached peak notoriety with Bayit pregamers and Swings-salad eaters. The Argus sat down with Resnick to get to know the fame behind the romaine.

Gabby Resnick: I think I say hi to a lot of people. I think people recognize that. I’ve been told that I’m really annoying to walk with out and about on campus—it’s a small place, high concentration of people. Orientation is probably part of it. That’s my personality, but was also a job that I did for three years and I met a lot of people through that.

A: So what are the big things that you’re involved in on campus?

GR: I used to be more involved in things, just generally. I was involved in Fossil Fuel Divest, which is kind of not really a thing anymore. I did orientation and extensions of orientation. And I also work at WesWings, which is also a very social job.

A: How long have you been at Swings?

GR: Since my sophomore year.

A: And there’s something about a salad?

GR: Yeah, um, shout out to Steph and also Brent. I didn’t really—it’s a salad that I certainly enjoy, that I liked, but it was not a thing that I had ever ordered before. I got a call when I was actually in the radio studio, because I have a show that I always want to plug—4:30 on Saturdays! I was in the studio and someone in the kitchen, Mike, called and he was like, “Gabby, we listened to your show.” And I was like, “Wow, thank you so much, that’s great!” And then he was like, “You should come in, there’s a salad named after you.” And I was like, “What?” And so I come in like an hour later and it’s on the board and I had to be really extra about it because how many times in your life are you going to have things named after you? Probably not often. So that was super exciting, definitely one of my Wesleyan highlights.

A: And so what are some other Wesleyan highlights that stick out?

GR: I think, if we’re talking along the “Wes Celebrity” type of thing, there was a pregame my freshman year called “The Gabby Resnick Pregame,” which was a truly wild event, because it was another of these things that I kind of walked into. Two of my friends, sophomores at the time, Mira Klein [’17] and Sam Curry [’17]—also WesCelebs, in their own right—were like, “Gabby, we’re gonna throw a pregame, and you’re gonna be the theme.” Like, it wasn’t my birthday, I hadn’t accomplished anything, I was a freshman, I really did not know a lot of people, and they were like, “Yeah, we’re just gonna do it.” And I was like, “What?” And they made such a big deal out of it. They invited like 120 people, they made a Facebook event. I walked into that pregame and there were already like 40 people in the room—it was in the Bayit. They were all wearing name tags that said: “Hello, my name is Gabby Resnick.” It was terrifying. It was like something out a bad sci-fi movie, where everyone’s like a robot. And they had my prom pictures put up on the wall? It was just like: Why did you go through so much effort to do this? Thinking back on it, it was this crazy thing where, afterwards, all of these people—most of whom I did not know—would come up and be like, “Hello, Gabby Resnick.” And I’d be like, “Who are you? I don’t know you!” But in time, I did get to know them. They’re great. Most of them have graduated. But that was kind of wild.

A: And you’re welcome to plug your WESU show! What’s it about?

GR: Oh my God, thank you, love to plug the radio show. So I host with Krittika Roychowdhury [’18]. She’s fantastic, a good friend of mine, and it’s called “All About.” I started hosting it with Zazi Alter [’17], who graduated last year. We did it my junior fall, so a year and a half ago, and then I went abroad…so we started doing the show, the two of us, this past fall. We interview people all about whatever they’re doing—hence the name, “All About”— so maybe they’re a business owner, or interview them about a thesis. And we try to get people who are Wesleyan students, from the Middletown community, anyone in the area, because WESU is a community and college radio station, so we really want to hear stories from multiple people’s perspectives.

A: What was a cool story that you heard recently, or this semester?

GR: Our first week this semester, we spoke to another good friend of ours, Alice Markham-Cantor [’18]. She had been in Hawaii when they sent out the alert and it ended up being a false alarm. She just happened to be visiting her grandma in Hawaii, so we had her on the air, just to talk about what that was like and what that meant for her family, and also the political implications. What we try to do—I’m really going hard on the show’s plug—but what we try to do is take a personal narrative, talk about the personal narrative and about that person’s experience, and put it in a broader social context. So if you’re a Wesleyan student, or someone in the community, that has a cool story or is involved in a cool project and want to be on air, please reach out to me. We love to have different guests from all over the place.

A: Coming in your first year, is the religion major something that you knew you wanted to do?

GR: No, definitely not. It wasn’t, like, so far out of my wheelhouse. I kind of thought I’d be in social science, and I just loved American history, basically. I actually took a class my freshman fall about the history of Protestantism. It was a super cool class. I loved the professor, and it was a really illuminating take on American history. I didn’t grow up Protestant, and so, sort of, the whole second half of the course was about Protestantism in America. It was like, “Oh! America’s a Protestant nation!” Lightbulb moment. And I took another religion class that spring, and looked into the department more and more, what it was about. I had heard great things about the professors, I liked the mission statement. It’s not like I was switching from biology—it felt like a logical choice.

A: I know this is a terrible question for seniors, but do you have any post-grad plans? Or know what you want to do?

GR: I don’t. I’m going to move back in with my mom, which I’m excited about.

A: I’ve also heard about your investment in sports?

GR: Yeah, sure! I think sports are really important. I’m really into youth sports…. First of all, physical activity’s just good for you. We all know that. But I just think it’s such a great place to get out your energy and be enthusiastic. My friend, Emma [Fuller-Monk ’18], and I, we have an intramural basketball team that unfortunately just ended. We’re in the C League, we’re maybe not the greatest team, we maybe had a 0-8 record, some teams have done better and qualified for the playoffs. I really just believe it’s about improvement, getting better, about bringing out the best in ourselves. Yeah, and I also really like watching sports. It was just something I did growing up, and I just really liked the activity, the energy, the spirit. I think, actually, speaking of post-grad plans, one day, being like a youth sports coach, would really be a goal. Like, middle school girls. That’s a prime age where it’s just—unfortunately, I feel like middle school girls are just beaten down in just a lot of ways. It’s just a really tough time, and I think if you can be uplifted by a sports team, then so be it.

A: Also, did you want to talk about your experience abroad?

GR: Yeah! I think I went abroad for a few reasons. I definitely wanted to shake things up. Wesleyan is a tough place to be at, and I think I needed a little space from it. I wanted to go somewhere and learn about a new culture and meet some new people. For me, the program in Mérida, Mexico, was just a really nice fit, where I could study in the anthropology school there, which is kind of connected to religion, and my Spanish improved a lot. It was really cool to just be in a place that was unfamiliar, in the sense that I’ve never lived abroad and it is a different place…. And it was just different from something I had never done.

A: And one last question. What’s something that people might not know about you?

GR: I feel like I’m kind of an open book, like there’s not a lot of mystery to me. Some people have told me that I don’t seem very high maintenance. I don’t know if that’s a perception I want to have of myself, or is one that people might say about me, but I’m more high maintenance than I want to be. You can ask my housemates—I’m just kind of a lot. The public persona of being a lot is also true in private. I’m just a lot. I’m kind of particular, I talk too much about my back problems. But that’s all I can think of.