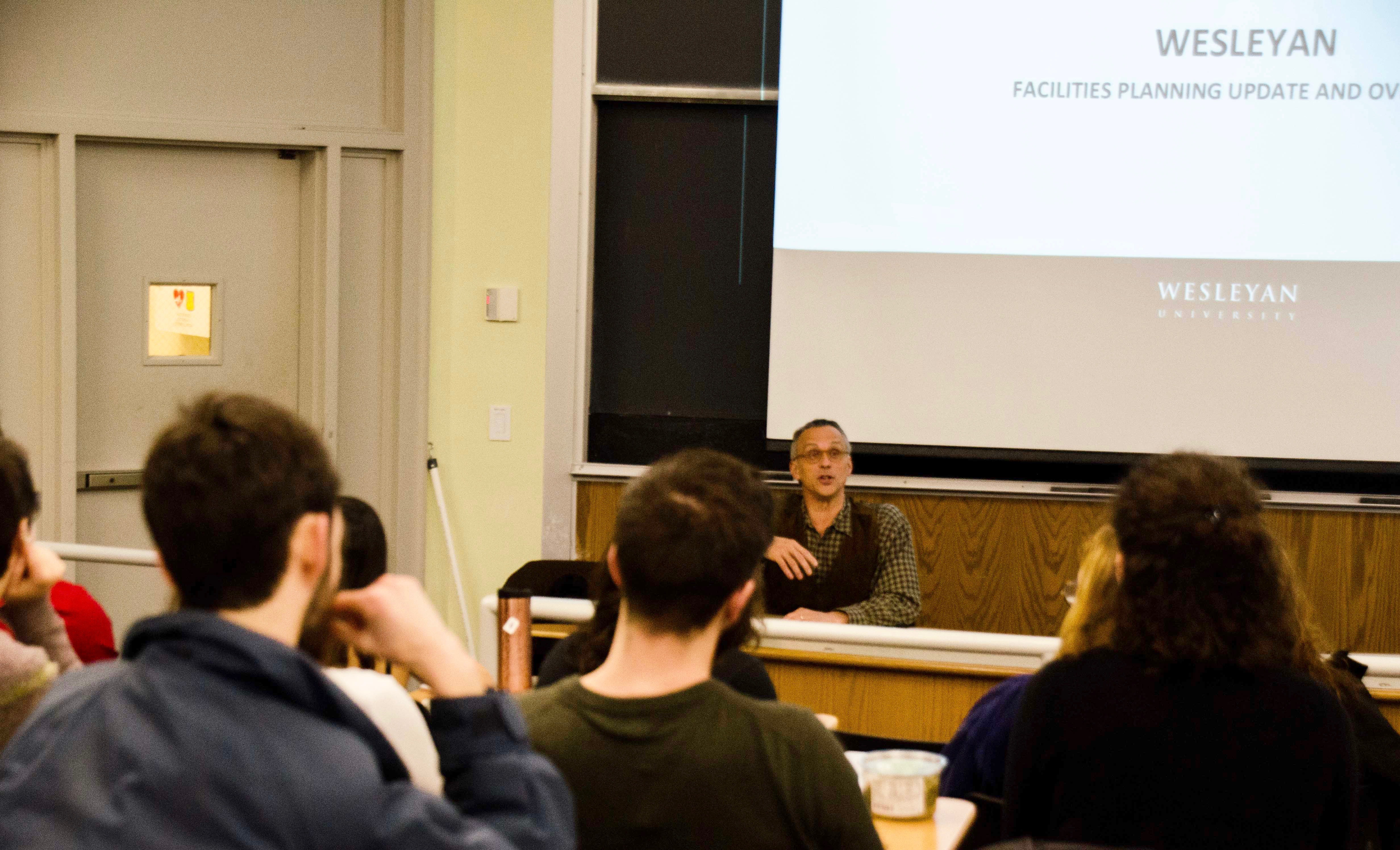 The forum opened with an overview of the planned construction from President Michael Roth ’78 and Provost and Vice President for Academic Affairs Joyce Jacobsen. The two outlined this facility program, which is one aspect of Beyond 2020, much as they did in the previous Facilities Forum.

It was during the question-and-answer portion of the meeting where students made their desires transparent to Roth and Jacobsen. USLAC member Emma Rose Borzekowski ’19 opened with two questions concerning the labor makeup for these upcoming projects.

“In the Wesleyan University Communication Participation Program, we specify that we try to have about 25 percent of work hours for people who are either local workers, minority workers, or women,” Borzekowksi said. “I was wondering how we came to that number and if that’s just a goal or a requirement that we’ll try to meet with all of these projects?”

President Roth was unsure of how the aforementioned percentage was decided upon.

“I don’t know how we came to that number,” Roth said. “I think that’s existed as a policy. But, we have over the years, used that as a framework for hiring firms, and have been able to keep to that framework over time.”

Borzekowski then questioned the makeup of the 25 percent further.

“Is that as a goal, do we know how much of that 25 percent is usually made up by local workers versus women who are local workers and who it’s lumped together?” she asked.

Roth responded that he did not know.

“I don’t have a sense of how many women and men beyond the construction crew,” he said. “We haven’t actually done any of the bidding yet.”

Another USLAC member Joy Ming King ’20 asked if the University had made any commitment to hiring local unionized labor for these upcoming construction projects.

“I think the commitment here is heard,” Roth responded. “There’s a framework. There is a local union as you probably know that would like us to hire only in Middletown or very close to Middletown—that is to hire their particular workers from their particular union. We don’t have such a commitment. We do have a commitment to having fair labor practices on our construction sites.”

At that point, Roth asked about which union was being referred to. King was unsure.

“So there’s a local construction union that periodically meets with us to urge us to use those particular union workers,” Roth said. “They are part of the mix of the bidding process.”

Will Barr ’18 brought up building projects from the recent past—namely the construction of the first-year dormitory Bennet.

Roth described that spending from that era was generated through debt financing. He mentioned that during the Bennet construction there had also been a much higher spending rate from the endowment.

After some more questions, Roth clarified his point about using endowment funds for construction in relation to financial aid.

“The challenge here is that we have been able to raise a lot of endowment from financial aid, and to raise more money for facilities,” Roth said. “We don’t want to get people out of the habit of giving for scholarships, so although it’s a change in focus, we want to maintain a significant contribution of gifts to the endowment during this same period.”

Some students voiced concerns over hiring workers from out of state for these projects. Roth said that this was a concern also shared by the administration.

“We do not intend on hiring out of state workers at very low rates,” Roth said. “What that means in the final mix, or the mix of workers, we haven’t determined yet. But we do have this framework for hiring so that we won’t find ourselves in a position where we are hiring people who are coming from far away at very low rates.”

In conjunction with these concern, issues regarding a lack of space for growing spiritual and religious groups were brought to the meeting by Interfaith Council representative Yael Krifcher ’19.

“Since my freshman year at Wesleyan, the Muslim Student Association has grown from five to 30 students,” Krifcher said. “They have no space to pray on Friday for the jummah prayer because there’s nowhere on campus large enough to house their thriving community. Some Jewish students can’t eat at the Bayit for Shabbat services on Friday night which hosts upwards of 60 students some weeks because it doubles as a residential program house so basic dietary restrictions of keeping kosher are impossible to preserve there. Wes Sangha, which is a zen oriented student group on campus, competes with organ practices and also with wedding services in the chapel, and these are just a few examples.”

Krifcher asked Roth to agree to meet with the Interfaith Council to discuss a solution to the problem. Her request was successful.

USLAC member Gemma Shay ’18 said that the organization felt positively about how the open forum went.

“USLAC wanted to be there to make sure that our concerns about labor practices at Wesleyan, specifically when subcontracted workers are involved, were being addressed,” Shay wrote in an email to The Argus. “During past major maintenance undertakings, the university has had issues with labor violations regarding 1099 workers (employees who are categorized by their employers as ‘independent contractors’) being used by companies that we contracted with. Administrators addressed this concern and seemed committed to making sure it would not be a problem again.”

Shay also mentioned that USLAC was pleased about the University’s willingness to possibly implement a sexual harassment training requirement for all subcontracted workers. USLAC plans to follow up with them about this.

“The one concern which we did not get a commitment to working on was hiring a greater percentage of union workers, as well as having greater diversity among the workers being hired,” Shay wrote. “We will be following up with these concerns throughout the time that major maintenance is being performed and hope to continue to push Wesleyan to maintain fair and equitable labor practices.”

Correction: This article has been amended to indicate Joy Ming King’s name as such.