“Mean Girls: The Musical,” Unlike Fetch, Is Definitely Happening 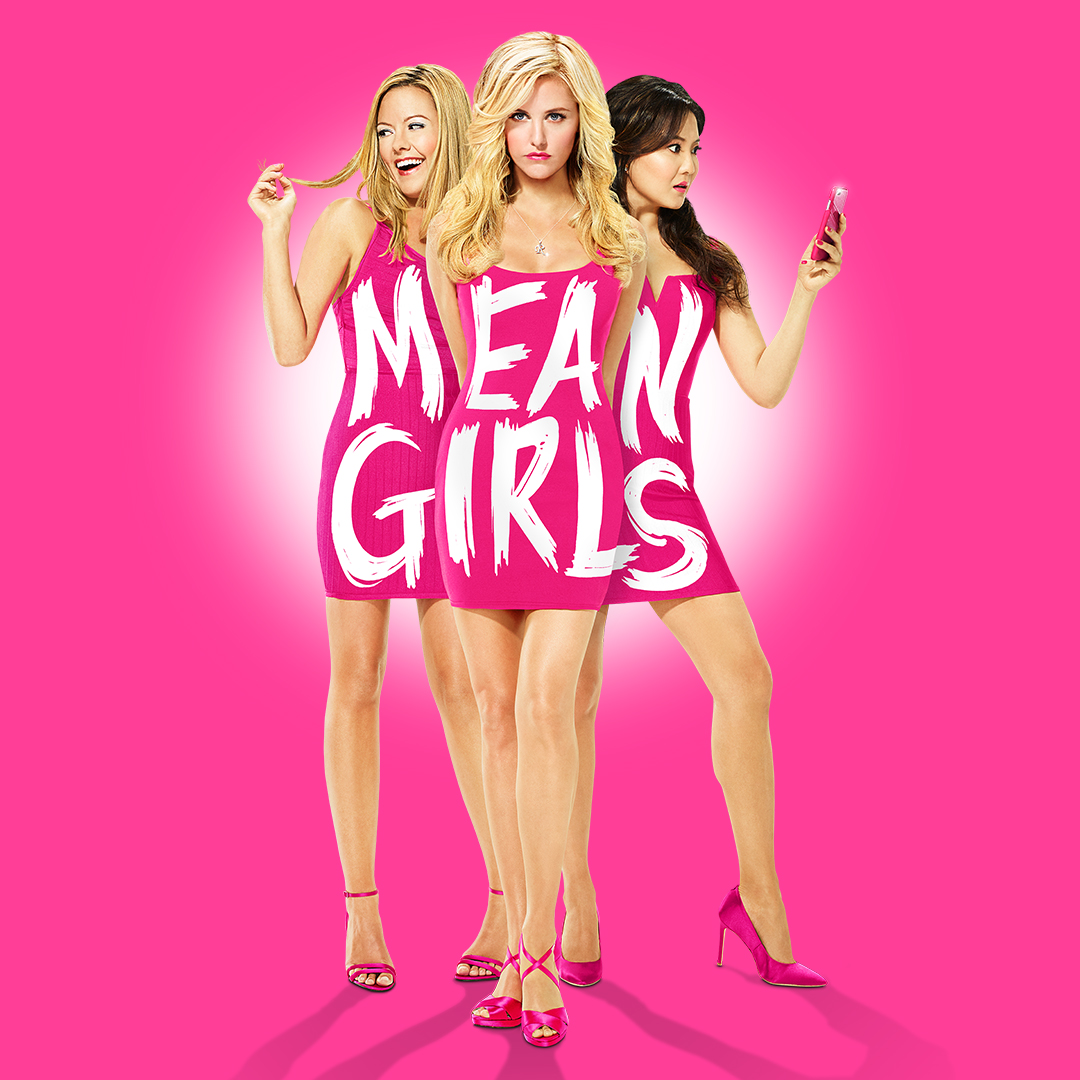 There are some movies that are so widely adored, such a staple of hangouts and sleepovers, that they become a part of the high school experience for an entire generation. For the ’80s, this was “Heathers,” which channeled anger at perfect-girl preps toward deadly ends. For the ’90s, this was “Clueless,” an adaptation of Jane Austen’s “Emma,” which updated questions of social standing and romance for an MTV world, with great style to boot. And for the 2000s kids, the movie was “Mean Girls,” which works as a combination of “Heathers” and “Clueless:” a sharp critique of the most popular girls in school, while also unearthing their insecure humanity and critiquing the people trying to take the mean girls down. Sound like too much for a teenage comedy? It isn’t, because with a screenplay by Tina Fey (her first), the film is flat-out hilarious.

It was so good it spawned a cult following. Just say the phrases, “The limit does not exist!” or “She doesn’t even go here!” out loud, and you’ll be greeted with sly nods of appreciation. Or, in some cases, thundering applause. That’s what happened at the National Theatre in Washington D.C. when these lines were uttered onstage in the musical adaptation of “Mean Girls.” The out-of-town tryout of the musical that happened last November (in preparation for its premiere on Broadway this March) was attended by adoring teenage girls and plenty of gay men, all of whom knew the film’s iconic lines by heart and eagerly awaited to hear them. The energy in the room was generous. There was an incredible hunger from the audience for this story to be told, and the actors were ready to deliver it. If there were any producers in the house that night, they were probably reassured by their investment: there is a huge audience that grew up with this movie and wants to see it presented in this way. For the most part, the musical delivers, even if it occasionally stumbles in its new musical form.

For the uninitiated, “Mean Girls” follows Cady Heron (played by Lindsay Lohan look-alike Erika Henningsen), a naïve high school junior who’s been homeschooled her whole life while living with her parents in Africa. When her mother gets a job in the Chicago area, she relocates and enters North Shore High School, completely unaware of the strange social order that happens in “girl world.” Luckily, some social outcasts help her out: Damian (Grey Henson) is “too gay to function” and sports some stellar RuPaul’s Drag Race t-shirts, and Janis (Barrett Wilbert Weed) is no longer a goth (like she was in the movie) but a Frida-Khalo-jacket-wearing art kid. They explain this world to her in the fabulous number, “Where Do You Belong?” which categorizes all the cliques in the school. But a burst of pink light emerges from upstage, and with a Kim Kardashian-like presence of awe and obsessive worship, “The Plastics” arrive. 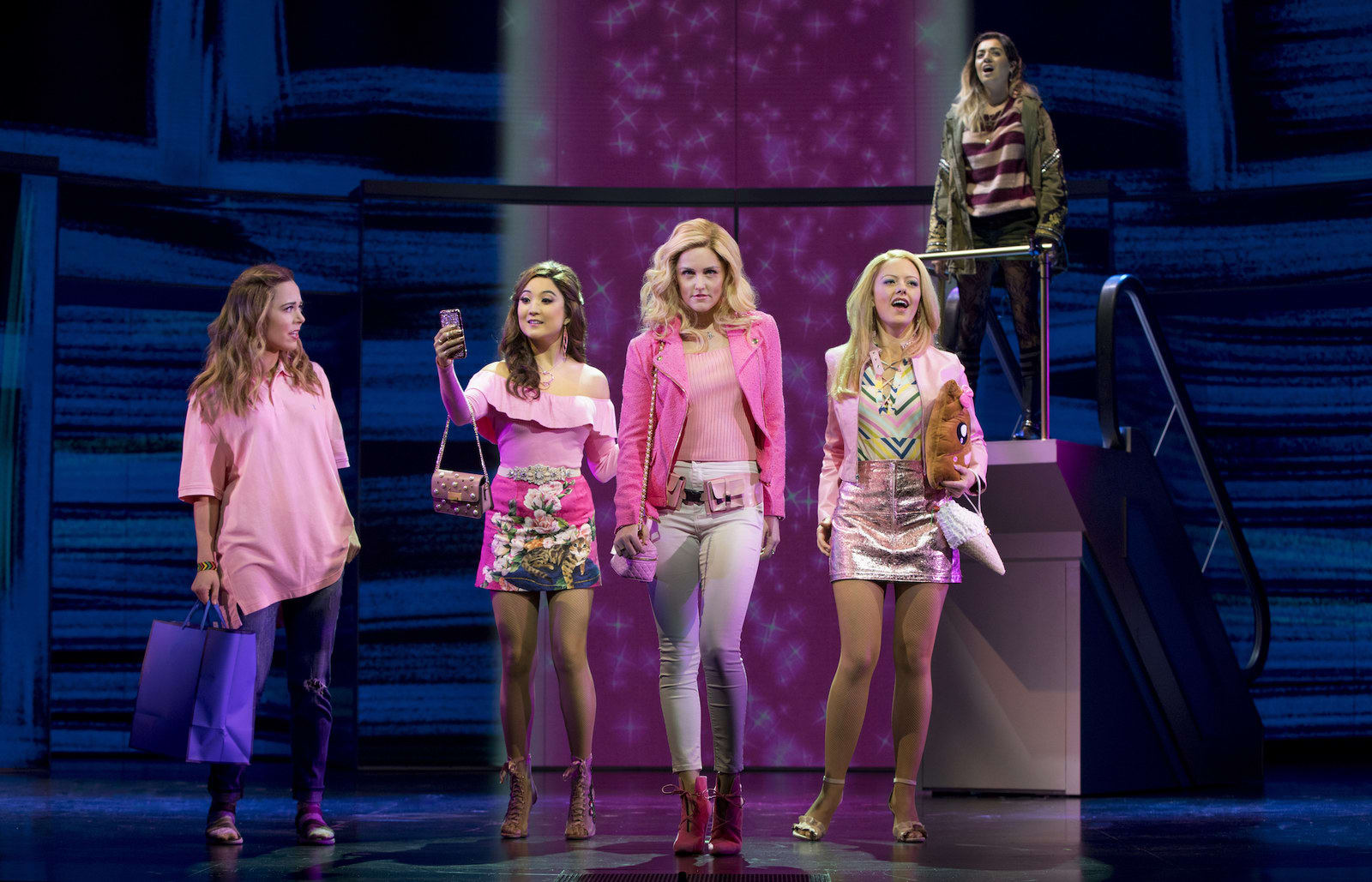 The mean girls rule the school in a triumvirate of social domination. Karen Smith (Kate Rockwell) is the “dumb” one, staring off into space with a delightful, but lost, gaze. While she could easily be played as a cruel joke, Rockwell imparts Karen with a real sense of sincerity, despite her many misunderstandings. This is never better than during her sex-positive Halloween-party number, where she messes up the song midway through and literally starts over again, something both provocative and endearing. Gretchen Wieners (Ashley Park) is the “sneaky” one, whose hair is big because it’s so full of secrets. Gretchen is a complex part, and Park plays up her longing for acceptance in a nervous, but still petty way. Yet all bow down to Regina George (Taylor Louderman), the top dog of the group who enters the show singing, “My name is Regina George and I am a massive deal.” While Karen and Gretchen serve as reflections of different stereotypes, it’s hard not to feel a magnetic pull towards Regina, both the most put-together person you’ll encounter in high school and the one planning your downfall behind your back. Louderman does a great job of maintaining this contradiction of fascination and repulsion that was cemented by Rachel McAdams in the film, keeping you laughing but also cringing at her character until the end.

It’s this pull towards Regina that makes Damian and Janis encourage Cady to infiltrate the Plastics and slowly plan their downfall. The thing they all didn’t take into account was that in taking down the Mean Girls, Cady would have to become one herself. The social rectification they’re planning becomes a school-wide problem of usurping, not dismantling, Regina’s throne.

If all of these questions about popular kids vs. nerds seem a little outdated, it’s because they are. Recent teenage movies have shifted away from this power struggle made iconic by “Mean Girls,” as popular indie films like “Juno” or “Lady Bird” have dived into female teenagers’ messy identities rather than girl vs. girl catfighting. The social world of adolescence also looks strikingly different today than even just ten years ago. Where does “Mean Girls” fit into the Instagram age?

Surprisingly well, in fact. As the librettist, Fey has updated the script to fit a world overwhelmed by social media. Her years of writing and starring on “30 Rock” have only sharpened her comedic edge, and the pop culture references feel completely authentic. The pressure to be accepted and “liked,” and the ability to judge with rapid-fire speed are all now well represented in the story. If President Trump can send out some nasty barbs on Twitter, so can Regina George.

This influence of technology can also be seen literally on the stage, where concert-style LED screens serve as the backdrop for every scene. This prominent placement of screens might strike some viewers as ridiculous: are we so attached to our phone screens that we now require giant ones in our theater? But with videos designed by Finn Ross, these screens allow for some inventive interactions between song and lighting-fast scene transitions. Over the course of the Act II opener, “Bossed Up,” characters can walk across the stage and go from the school to a frozen yogurt place in a second. While this technique robs the show of some of the inherently theatrical elements of larger set-pieces, it also places the show in an interesting zone of both familiar and new for the audience.

This is a hallmark of director and choreographer Casey Nicholaw, who also lent his talents to the Broadway hits “Book of Mormon” and “Aladdin.” His success on Broadway has come from blending somewhat familiar narratives with a clear appreciation, and satire, of the musical theater genre. His staging does wonders for a fairly standard score by Jeffrey Richmond, which excels at large group numbers, like the powerful Janis number about Regina George, “Apex Predator.” But the show falters in finding ways to meaningfully expand Cady’s story, even when it gives great moments to its supporting cast. Who knew Regina’s mom (Kerry Butler) would get the most heart-breaking, touching song of the night? If only the same pathos could be found in the musical’s protagonist. More successful is the lyricist Nell Benjamin. After his sugar-rush of a musical “Legally Blonde,” one might be concerned that he couldn’t match the sometimes cruel words of Fey, but he’s able to find his way through to the emotions of the show in surprising ways. What other show is nerdy enough to describe falling in love with the phrase “calcu-lust?”

Sometimes, the precision that Nicholaw brings to the proceedings goes too far. Part of the joy of the climax of the “Mean Girls” film is how comically physical the catfighting became. That humor doesn’t get transferred when an audience has seen a full stage of actors dancing for an hour and a half before. There are maybe one too many group numbers, though if asked which one to cut it’d be a difficult choice to make. Again,  Cady gets unfortunately lost in the shuffle of songs. There’s an incredible shot in the film where Janis reveals the plans to take down Regina to the whole school, and Lindsay Lohan as Cady gives a devastating, teary-eyed look of regret. That moment is transformed into an anthem for Janis in the musical, and Cady’s sorrow is lost. Cady is in desperate need of an eleven o’clock number that was absent in the D.C. run.

The show would be wise to look at recent Tony winner for Best Musical, “Dear Evan Hansen.” There’s a slight nod to that show within the ensemble, as one of the characters wears a t-shirt with that musical’s name emblazoned on the front. It’s a clever touch, and perhaps an acknowledgment. “Hansen” follows Evan, an anxious teenager who, through a set of crazy circumstances, ends up living a double-life made only more extreme by social media. Cady and Evan follow similar trajectories, both speaking to the pressures of femininity and masculinity, respectively. However, “Hansen” takes its time to slow down and let the emotional consequences of the character’s actions reveal true pain, while “Mean Girls” keeps rolling along to the next plot point in a brisk fashion. This may be due to the cast size: “Hansen” has only eight characters, while “Mean Girls” juggles over thirty. But “Mean Girls” would benefit by laser-focusing in on its protagonist, Cady.

At the end of the day, this show is all but guaranteed to be a crowd-pleaser, and once the bright and pop-infused soundtrack is released, get ready for a swarm of musical theater kids to be blasting the opening number on their phones and looking up sketchy sheet music. While the show could benefit from a few cuts and deepening the emotional center, this incarnation seen in Washington, D.C. is a deeply fun, uplifting musical. Fans of the movie will absolutely adore it, and people who have never seen “Mean Girls” in their life will probably find themselves sucked into the moment. The movie might state that the phrase “fetch,” is never going to happen. But rest assured that love for the “Mean Girls” musical definitely will happen.