Expressionism for the 21st Century Comes to Zilkha 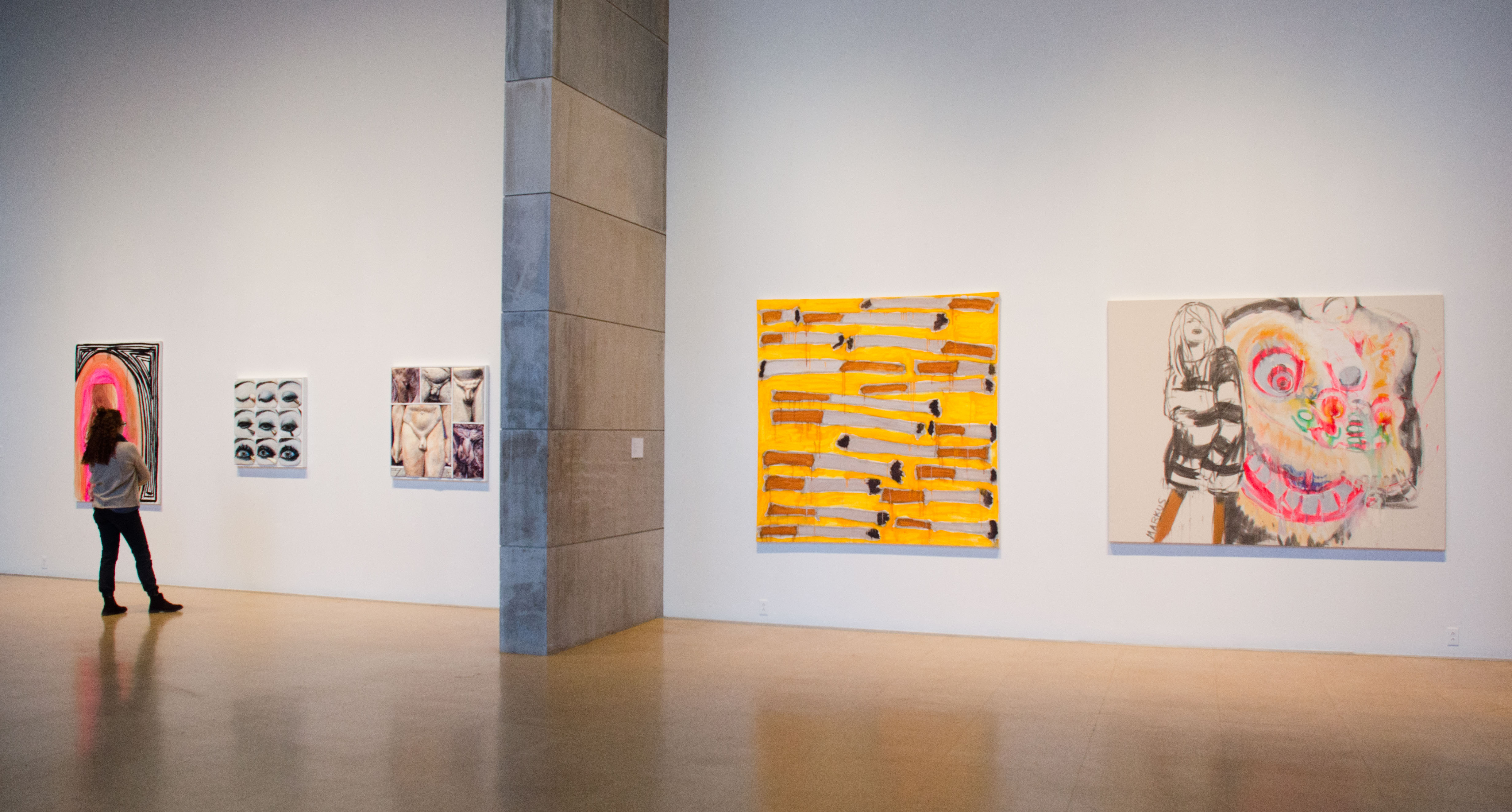 In the modern world of art, it is high time to view the consciousness of an oft-overshadowed group: that of the female Expressionist.

This past week, the Zilkha gallery hosted the opening of “A New Subjectivity: Figurative Painting After 2000.” Curated by Jason Stopa, Visiting Assistant Professor of Fine Arts at the Pratt Institute, and featuring works from six women, the exhibit is a celebration of gesture, color, and life with a distinctly contemporary flavor. Much like past movements of Expressionism, the work is highly energetic, relying on the brushstroke to create a sense of movement and vitality.

While in some ways it does celebrate tradition, the collection is also set apart from past movements of Expressionism by its distinctly up-to-date subject matter and inspiration. Rosemary Lennox, the Program Manager for the Center for Fine Arts Initiatives, noted the influence of early 21st-century pop culture on the works. For example, the artists featured take inspiration from YouTube makeup tutorials and fashion magazines.

“[There’s an] ease with imagery that sometimes feels more buoyant or has some, like, levity to it…there are some works that have an edge to them, that are playful, but there’s another undercurrent there of…something more serious, more brooding, or questioning…” Stopa said in an interview with The Argus. “That’s an ambiguity that seems to be more about our moment.”

This idea of “brooding or questioning” defines the new movement of Expressionism on display at Zilkha, taking the gestural style of the old and transporting it into the modern world. For instance, one of Liz Markus’ pieces, “Celine,” features a face lifted from Picasso’s “Démoiselles D’Avignon,” and imposed on a female body in Céline-brand clothing. Markus hearkens back to the artists who preceded her while also bringing her work into the modern sphere of pop culture and fashion.

“For me, especially for this work, I was being inspired by fashion at the time, and also…I have a body of work on paper of collages and collaging fashion stuff and painting, and a lot of this work on canvas came out of those collages,” Markus said.

This collage aesthetic comes through in her piece, “Gigi,” which depicts a young blonde woman taking off her sweater while looking directly at the viewer, surrounded by dripping paints in vivid black, pink, and orange. The woman is depicted in a photograph, surrounded by a painted canvas. The broad, expressive brushstrokes and vibrant, playful use of color mimic previous Expressionists, while the photograph of the woman brings a contemporary flair and sensuality to the work.

Not all of the artists derive inspiration for their work from fashion and pop culture. Katherine Bradford, a charming, New York-based painter with a pink streak in her white pixie cut, takes inspiration from the artists who came before her, especially Matisse. When working on her painting, “Red Studio Brooklyn,” Bradford mentioned being inspired by Matisse’s “L’Atelier Rouge” (Red Studio).

These women carry on the great traditions of painting, but they also add a great deal of individuality to their works. Bradford’s “Red Studio” is not a copy of Matisse’s. Rather, it is a continuation of a story and of a tradition that is passed from artist to artist, a body of work that is added to by each new creator. Bradford continues the tradition of painting that represents how one experiences the world, not necessarily how it appears in fine detail. Similarly, like Monet’s focus on light, movement and emotion rather than realism, Bradford continues this tradition of exploring the conceptual implications of light, especially through her work’s relationship to nighttime.

“It’s the romance of the darkness and how you see things very vaguely. I’m not a detail painter, so night corresponds to the way I see things,” said Bradford in an interview with The Argus.

Expressionism, and Expressionist painting in particular, is a way for artists to express their view of the world, to translate internal thought and vision into something communicable to others, and perhaps even something that will resonate and spark a personal and emotional response.

Beyond the minute level of the individual artists and their work, the collection functions very well as a collective show, connected by gestural brushstrokes and adventurous use of color. Jason Stopa, the curator, initially considered 12 artists, but in the end, chose a smaller group of six. Stopa discussed the cohesiveness of the exhibit, noting that there was a lot of playfulness to the exhibit.

This “playfulness” definitely comes through in the pieces. Their use of textures, such as those of wood or layered paint, as well as their use of bright reds and pinks, create a sense of whimsy and passion. In this way, the pieces translate human emotion into a visual, tangible expression. There is something very exciting about the work; while it resonates on an emotional level, it also feels, quite simply, fun to look at.

Ariana Molokwu, the program coordinator for the CFA, expressed enthusiasm over the more progressive political direction being taken by the CFA’s exhibitions.

“I appreciate that it’s an all-female or female-identifying exhibition…kind of moving along with the tone of social commentary, like how we had ‘Up in Arms’ last semester, same thing with ‘Black Pulp’. I think it’s just a great direction to keep moving in.”

Mae Davies can be reached at mdavies@wesleyan.edu and on Twiter @Maejunejuly21.